We had previously been invited to try Tabun Kitchen before.  It would be nice to see how they had developed.  The event on offer was a press dinner for the release of their Christmas menu (available to view here).  As the office seems to slowly be bringing in such a Christmas spirit, it seemed fitting to spend some time with a thematic meal.  Although you could say that this meal was rather early for a Christmas dinner, we weren’t complaining.  Hopefully scheduling so far in advance would avoid frantic last minute, slap dash and sloppy service.  Or so we hoped. 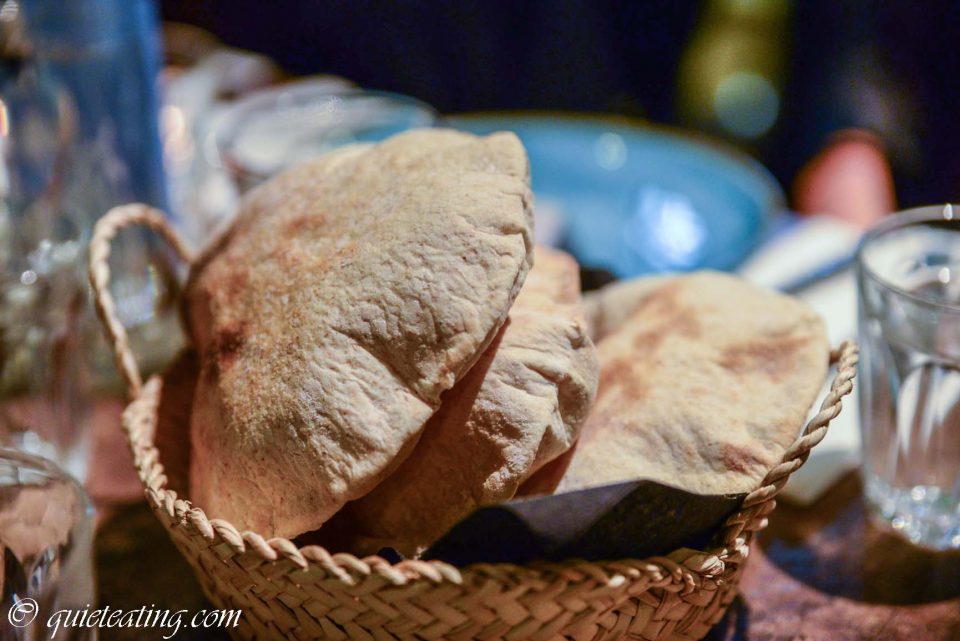 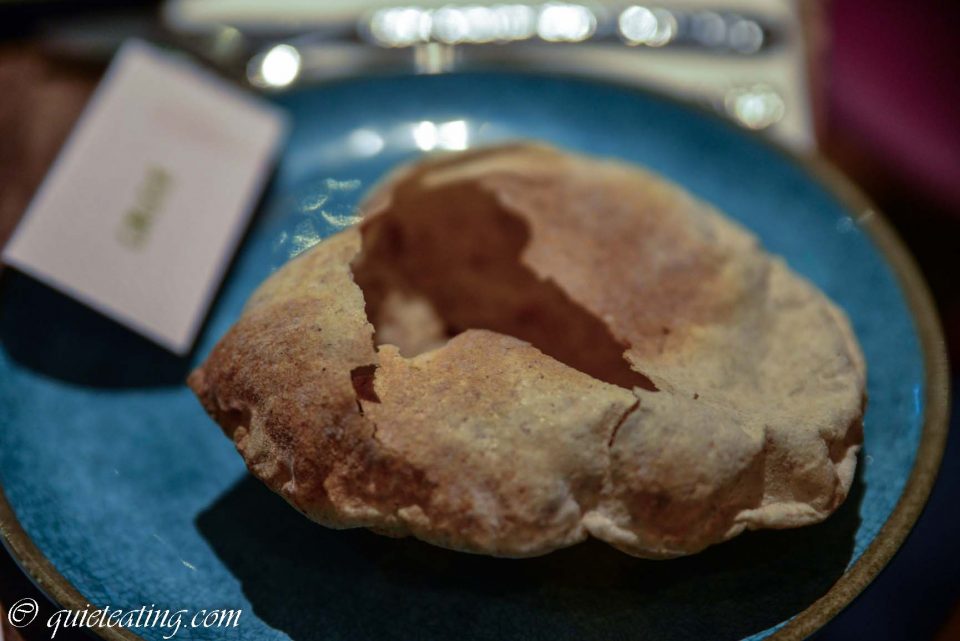 Flatbread roasted in a tabun oven.  As I was previously advised, a tabun is the name of the bread and the oven from which it comes.  It was not bad, a light start to the meal. 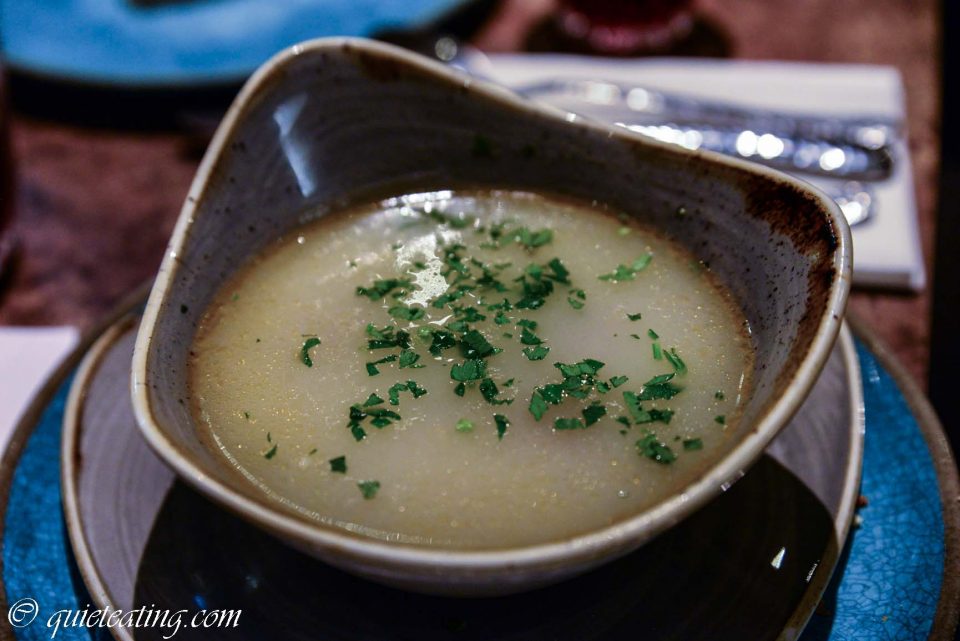 Bethlehem Meatball Soup. A lemony rice congee with meatballs. Now, I usually either have soup or rice congee; this would be the first time I’ve had both. It was novel but perhaps not in the way I would have hoped.  I wouldn’t say I would rush back for this; a little too zesty for my tastes and this was even before the addition of the lemon on the side. 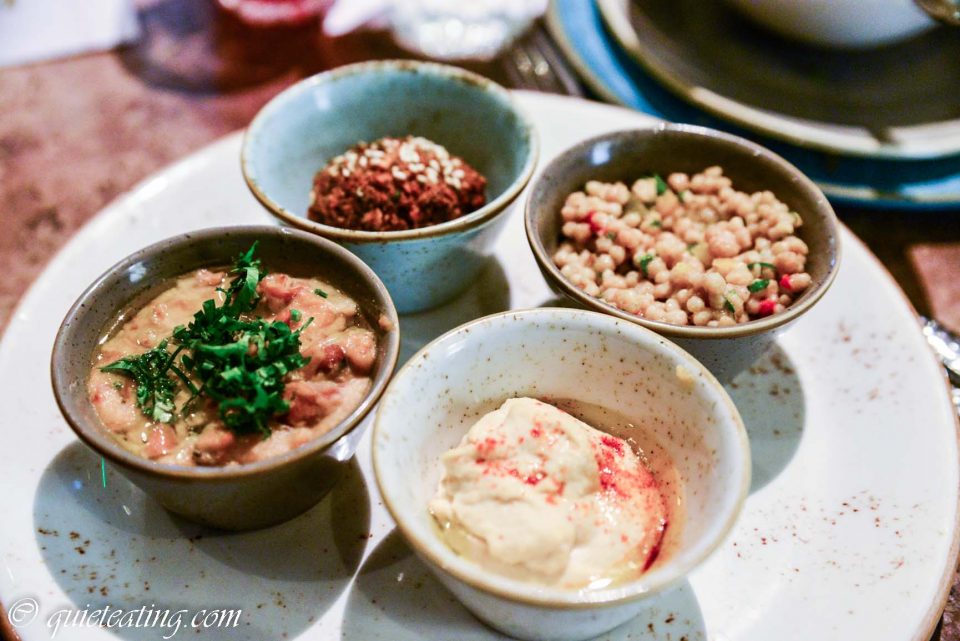 Taster Mini Mezze.  Starting from top going clock-wise. Falafel was excellent, probably the best I’ve ever had. Maftoul & freekeh salad was light and fresh and was a good palate cleanser. Hummus was smooth and complemented the bread well, creaminess mixed with smooth taste. Udssieh, kind of surprised me.  It was a salty accompaniment to go with the plain bread. 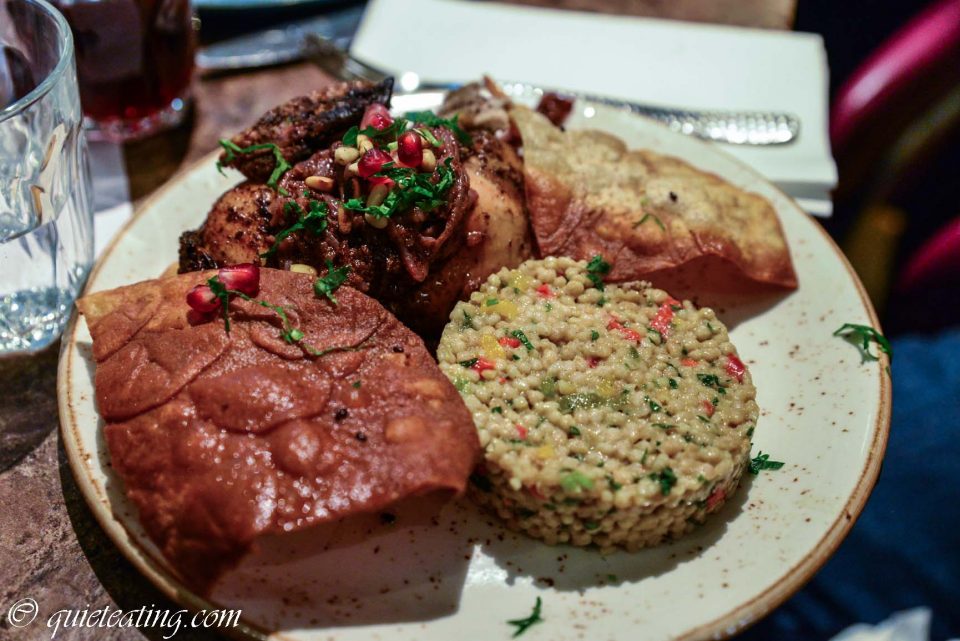 Roasted Sumac-Marinated Poussin with maftoul. I never liked Nando’s. I think their chicken is overly cremated and tastes like dried paste.  On good days, it tastes like eating overcooked chicken from the oven.  On bad days, it tastes like eating coal.  I would soon be subject to something worse. This chicken was massively overcooked and extremely dry. The maftoul (Palestinian couscous) was welcome not because it was particularly good but because it contained some moisture to add to an otherwise parched mouthful of chicken.  The pickled onions on the side continued this superlative trend as instead of being overcooked, it was pure citrus.  So much so that it tasted a little like Fairy liquid that I have tried when someone did not wash a cup properly.  More excitement was in store as the fried flatbread made getting the food to my mouth rather challenging.  Anything more than a gingerly sawing motion on the chicken would result in it flying into my lap.  Although perhaps it might be better placed there instead of my mouth. 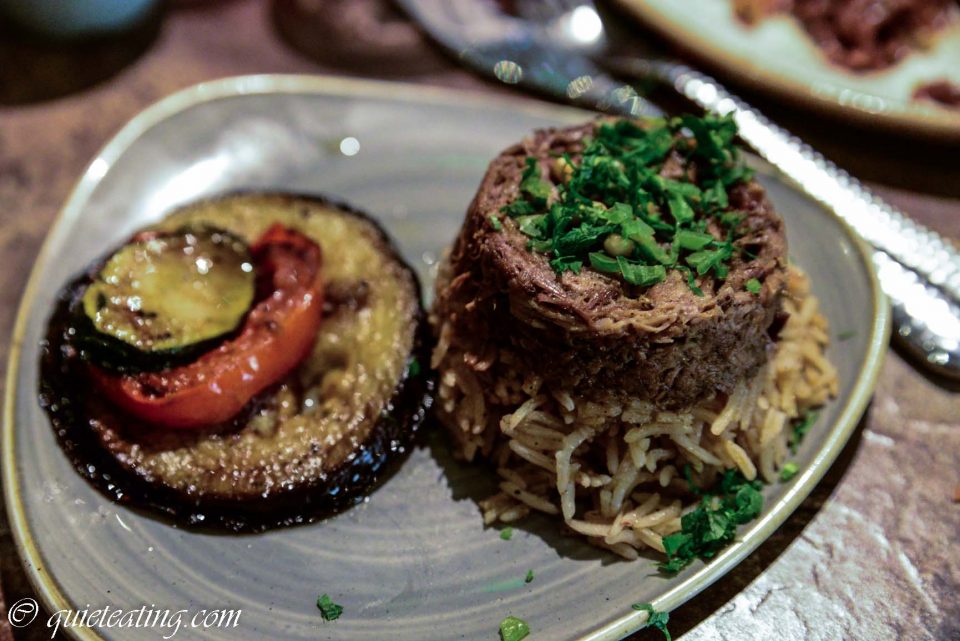 Lamb Makloubeh (slow-cooked lamb, rice, aubergine, pine nuts).  This would probably be my favourite dish of the day. The lamb had keen flavour and was offset by the rice. I don’t normally like aubergine but the aubergine, courgette and tomatoes were nicely grilled and spiced. Yet the most important thing to note about the dish above was that it was fairly minuscule.  The dish was so tiny that more of the food ended up on the table, the floor or the lap then in my mouth as the small plate made eating motions rather challenging.  Although, perhaps the small size was an attempt to distract from the fairly meagre portion sizes.  This would only be a main course if I was the age of five that my eating skill suggested. 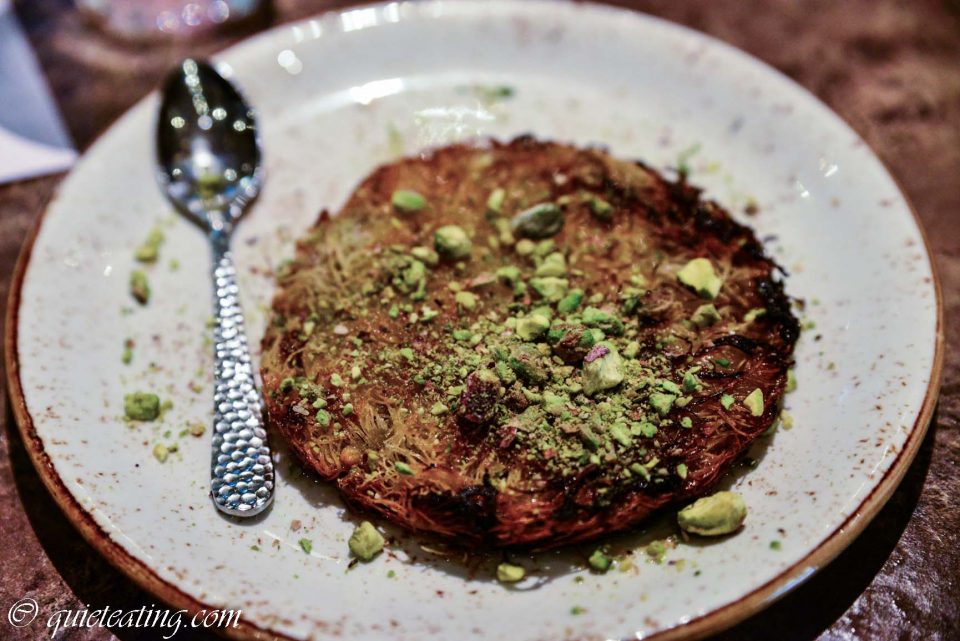 Christmas Knafeh (traditional cheese, shredded pastry, orange blossom syrup).  This was unfortunately rather sickly sweet.  Although I guess it could be worse.  It could have tasted particularly zesty. 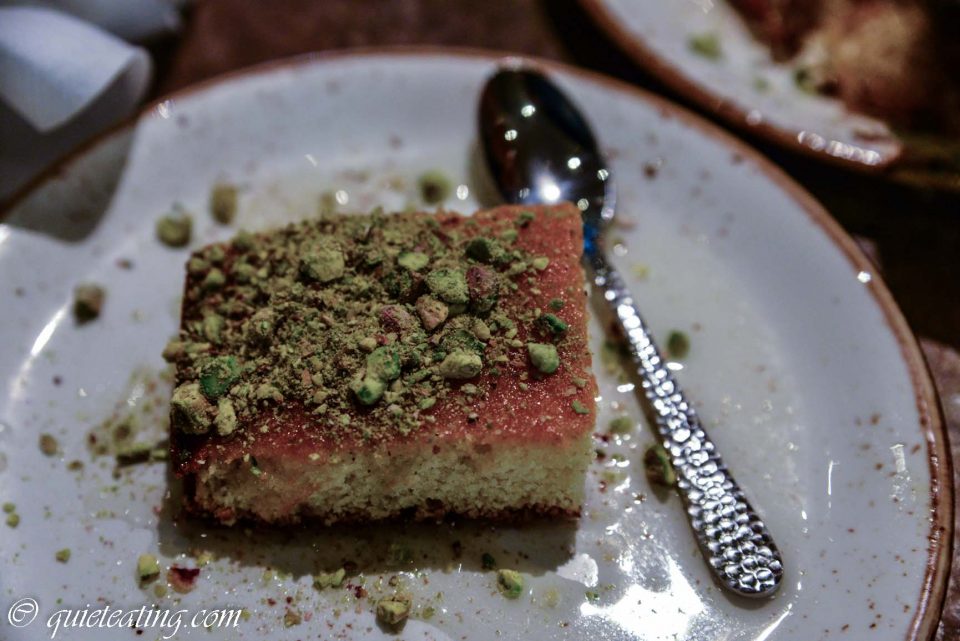 Hariseh Cake (semolina cake, coconut, orange blossom syrup), although it tried to save the meal, it was sadly too late, too dry and too hard. I assume that the idea was the syrup was supposed to attach a touch of moisture to an otherwise hard biscuit but instead we got rock-like consistency with syrup dribbled around the edges.

The food looked great, it tasted less so and perhaps the most critical problem was that it was rather tardy.  I am not speaking here of a 10-15 minute wait for the food but instead more like an hour for the mains to make an appearance.  After such an experience, we hoped that the desserts would follow speedily.  Perhaps that was the reason for the lengthy wait, that they were preparing everything at once?  Again, life proceeded to throw me lemons as we waited a further 40 minutes.  Putting such service concerns aside, you could say that the above was rather harsh and that I lack experience to express an opinion on Palestinian food.  Anticipating such remarks, I brought along a friend well versed in such Middle Eastern food.  His verdict: things kind of fell flat.  Palestinian food should be simple and generous in size.  We got neither.  I would be annoyed if I paid GBP20 for this Christmas menu.  People often (perhaps rightly) say that I am often annoyed for no reason but in this case I beg to differ.  Yet, I guess I should count my blessings as at least it was a complimentary trial.  Because if I paid GBP40 for this, I would not be just annoyed, I would be outraged.

We were invited to review.  Estimated cost of the above is GBP40 excluding drinks and service.

Tabun.  I wonder if the owners know what tabun means in Japanese.  It means maybe.  So maybe kitchen, an interesting choice to name your eatery.  I guess it makes it easy for waiters to respond to questions about food.

Customer: How is your kofta?  Is it the talk of the town?  Something to die for?

Customer: Do you think this Bloody Mary will go well with my falafel?

Customer: Do you actually cook anything worth eating here? 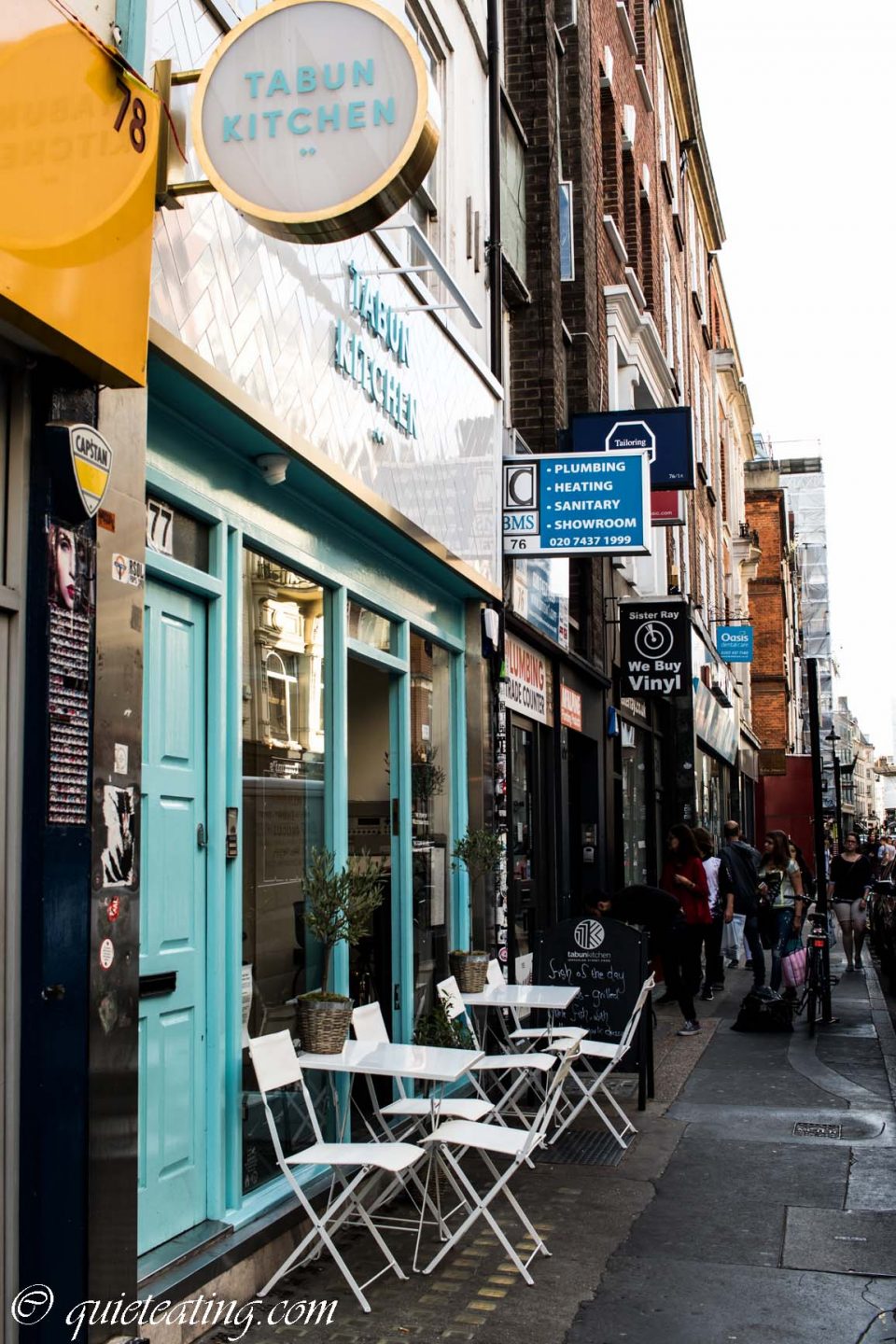 Interestingly, Tabun Kitchen is rather unfortunately located right next to another sign advertising something rather different.  Some customers might be confused when they duck their heads in to look for plumbing, heating or other sanitary appliances.  So, when you pop into Tabun Kitchen, instead of the lemon Fairy liquid you were looking for, you might find another type of lemony liquid. 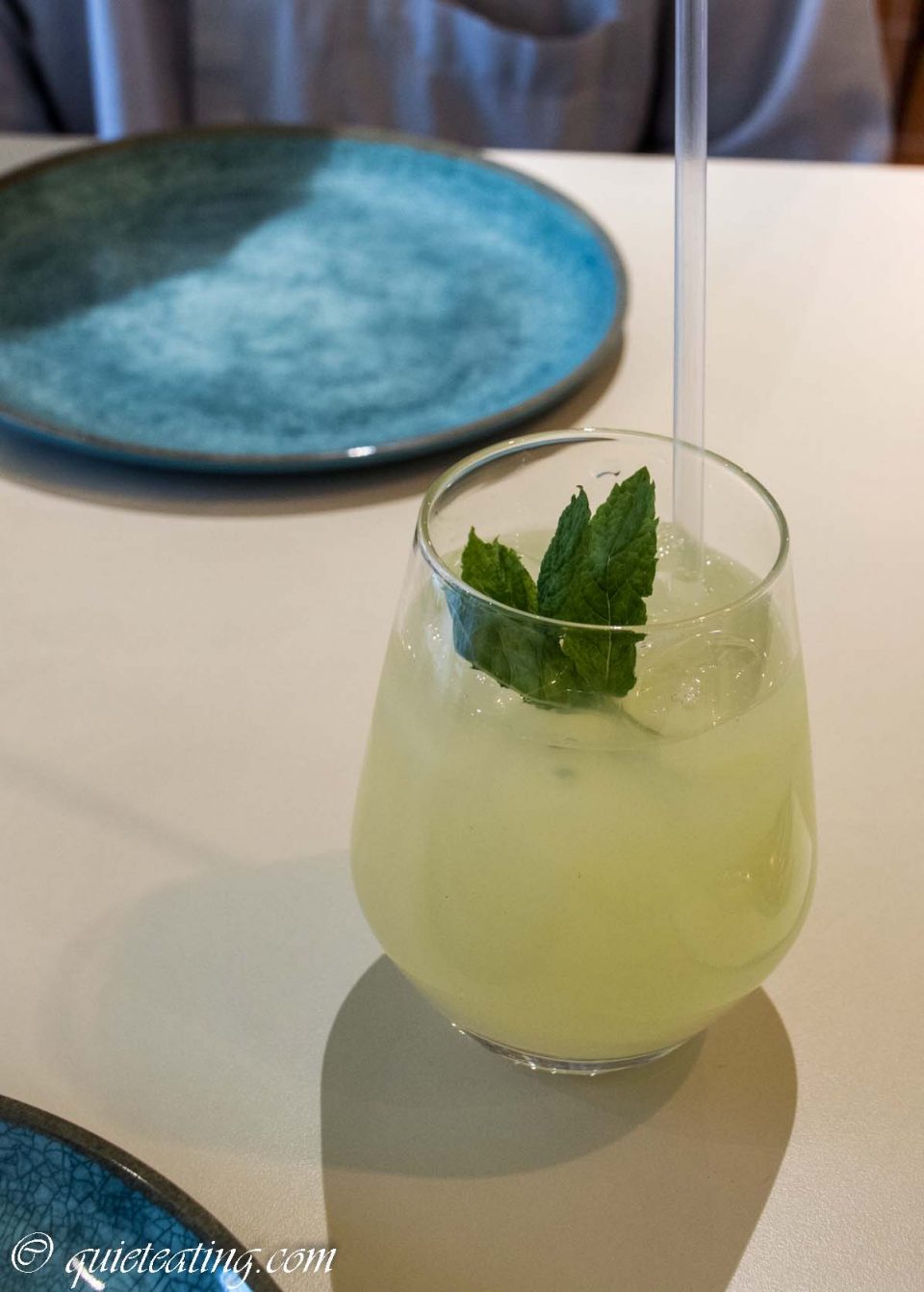 Lemonade.  Cool and refreshing, as lemonade is supposed to be.  This was refreshing preparation for the meal. 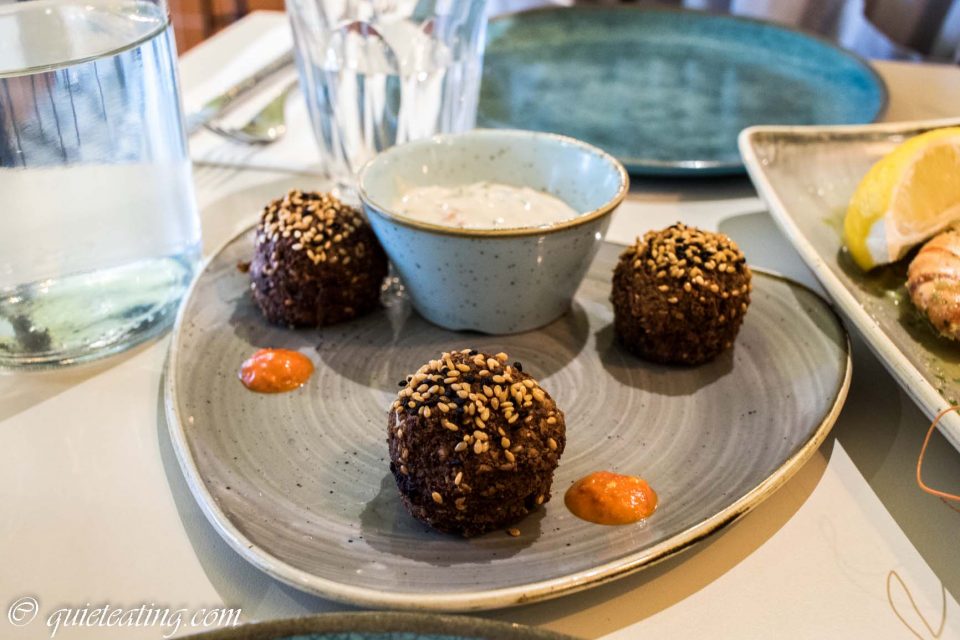 Jerusalem Falafel, falafel with sumac onion centre.  Crunchy on the outside, soft and moist inside, a good start. 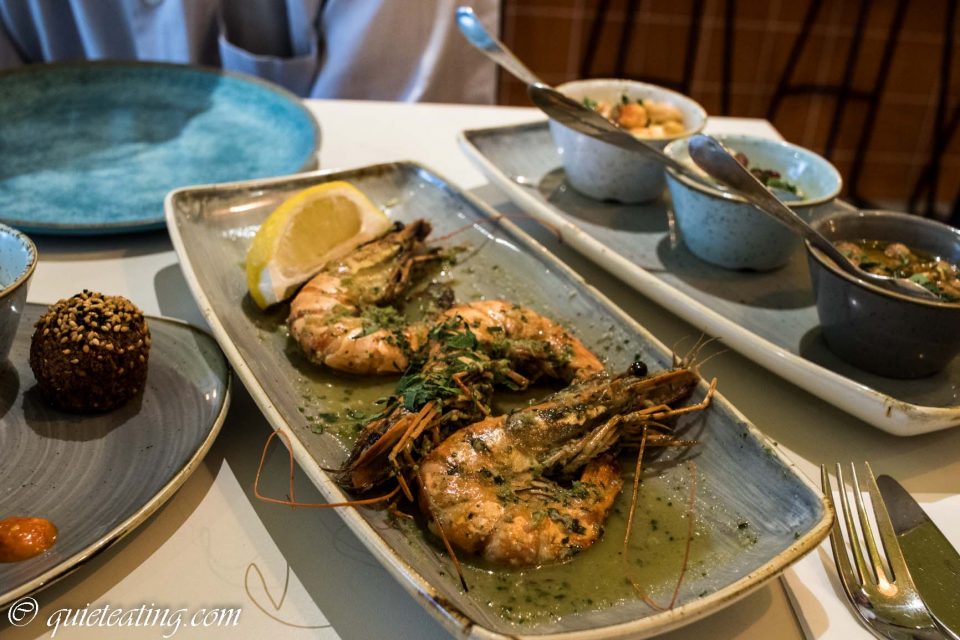 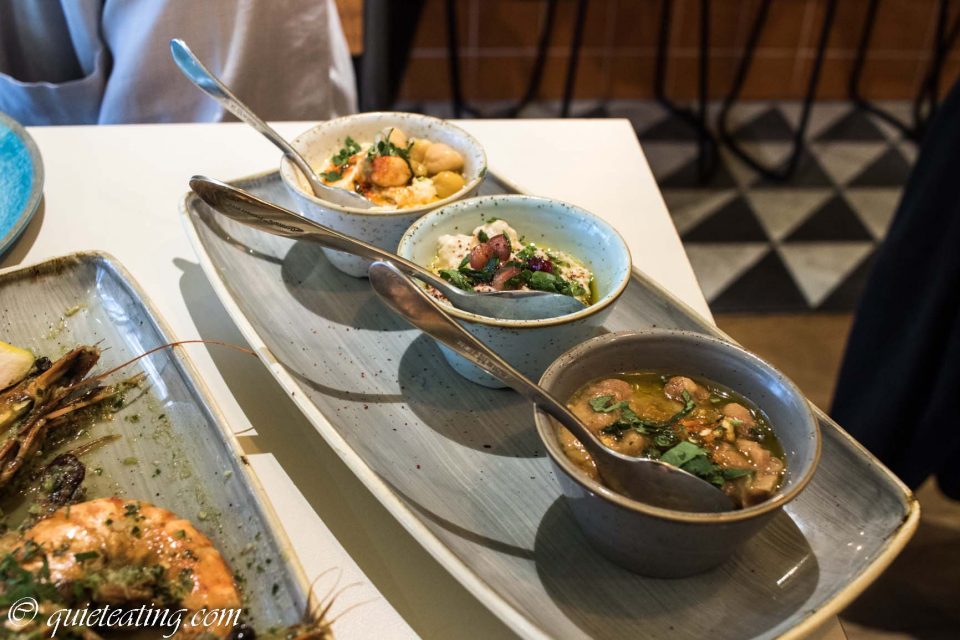 Mini Mezze, hummus, Moutabal smoked aubergine and Ful Mudammas (fava beans).  The aubergine and fava beans were not bad.  The humus was good.  Made me wish that I could have had a bigger portion of this. 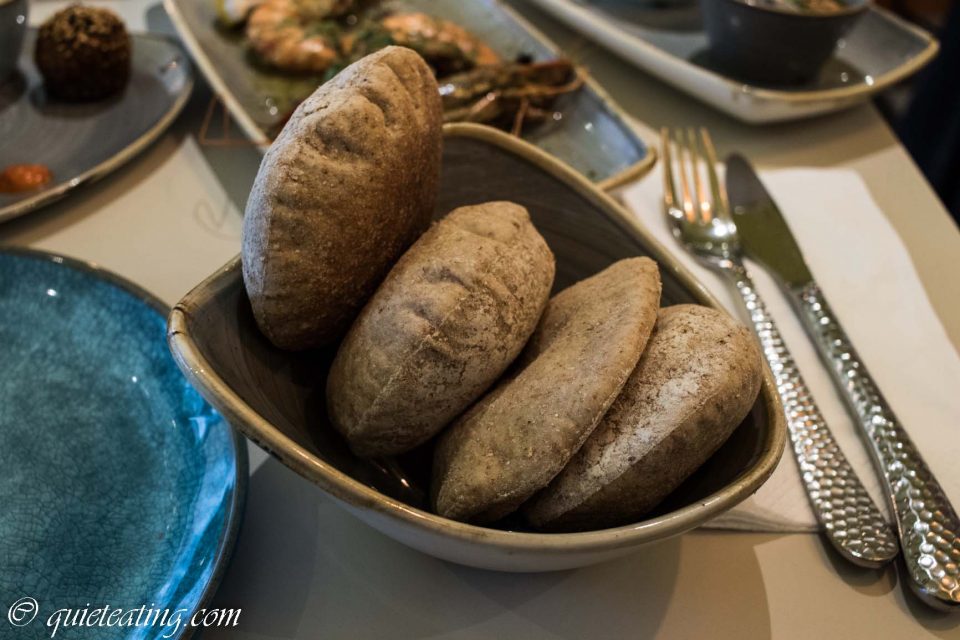 Tabun bread.  Full of hot air (in a good way), unlike some people I know.  Light and ideal to mop up the sauces. 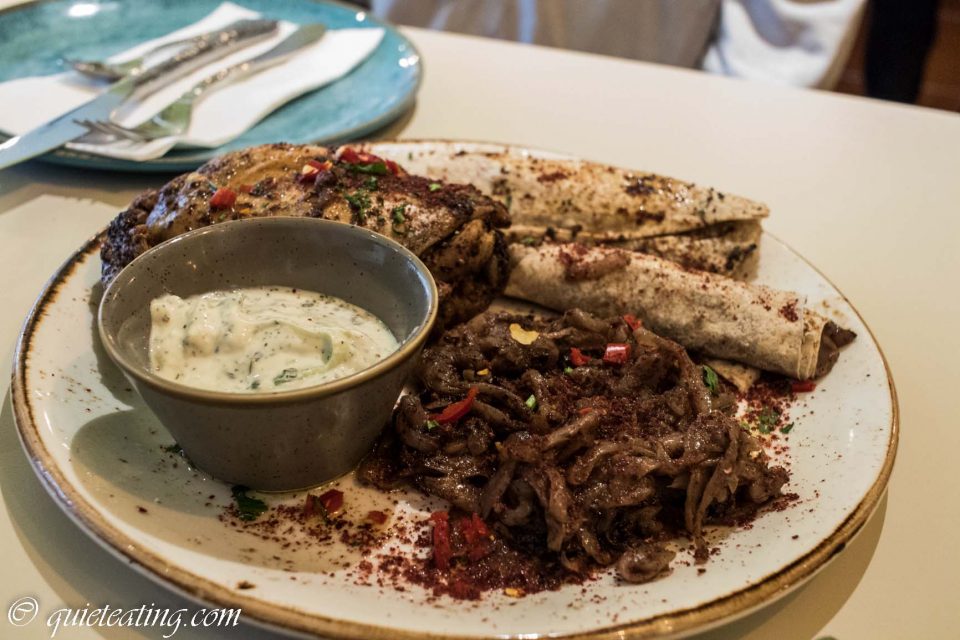 Musakhan Chicken, sumac roast chicken, onions, pine nuts and flat-bread.  This was ok but I especially enjoyed the flat bread, stuffed onions and pine nuts inside making for a good accompaniment to the chicken.  The chicken was a bit too heavily imbued with lemon though, turning the experience into something a bit too sour for me.  Although maybe I am too sensitive to tart food (and people).  Others might enjoy it. 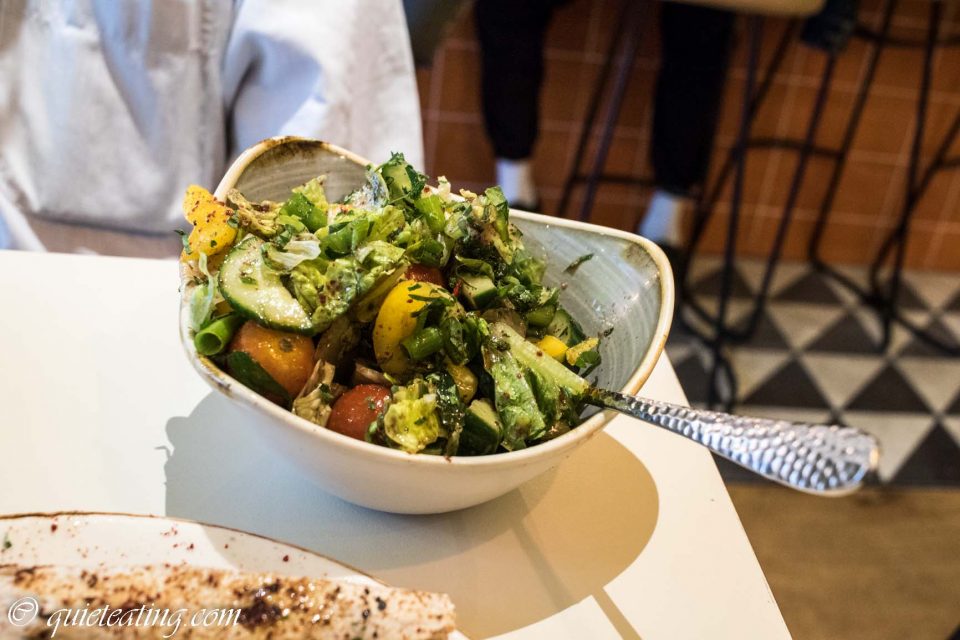 Tahini-tossed salad.  Fresh and light.  A healthy alternative to the other side dish. 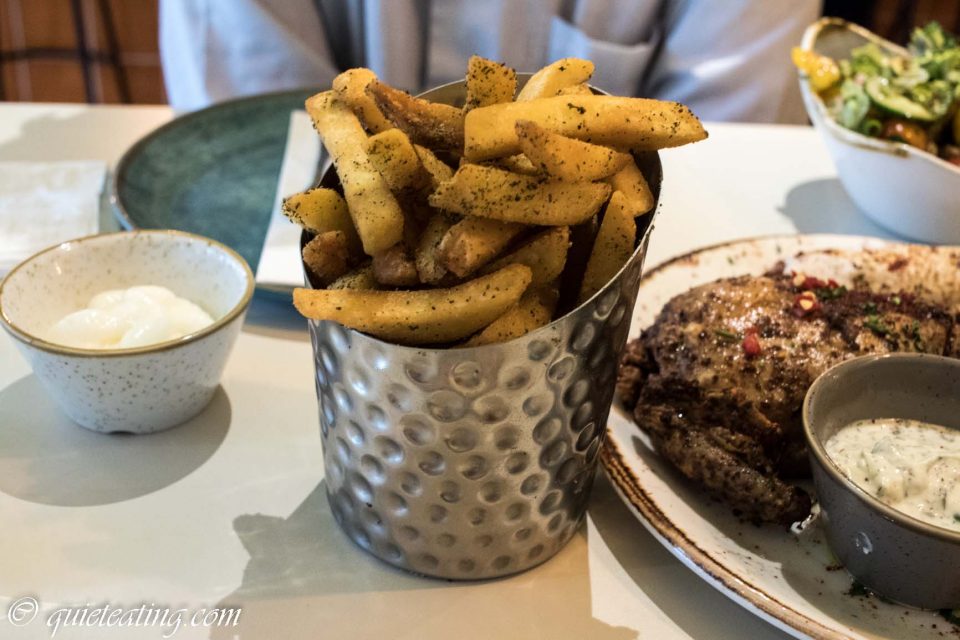 Za’atar Fries with Toum garlic sauce.  The chips were good and more to my likening than the healthy alternative.  I generally prefer flavour over health most of the time as often I prefer to live a happy life, rather than a sad and long one.  My only suggestion is that it didn’t really need the dipping sauce as they were good on their own. 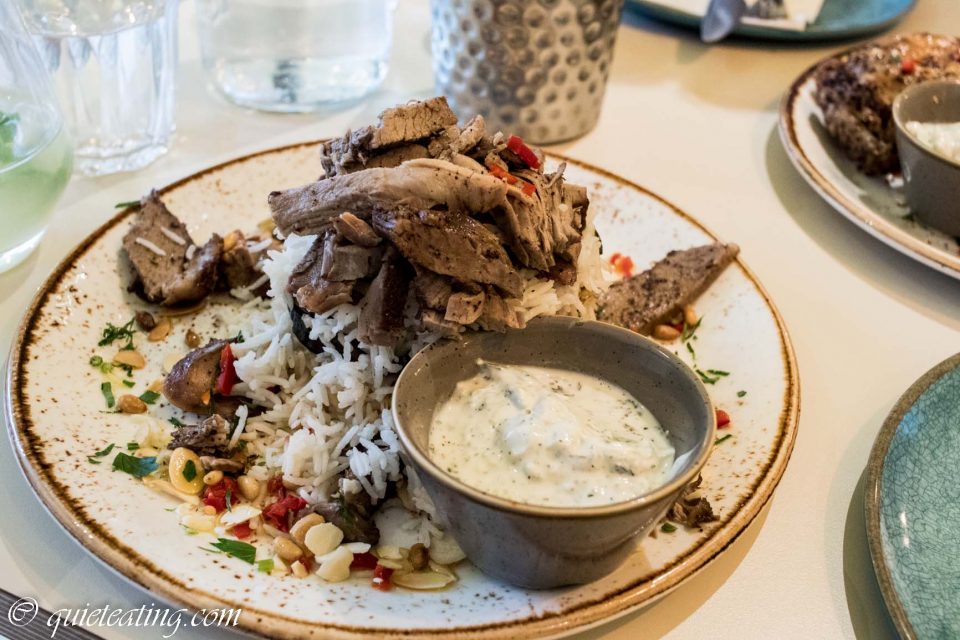 Lamb Makloubeh, slow-cooked lamb, thyme-grilled vegetables, rice and pine nuts.  Avoiding citrus overpowerment, this was not bad with strong lamb flavours, and lovely buried roast aubergine and tomato.  Although the lamb was sadly a bit dry. 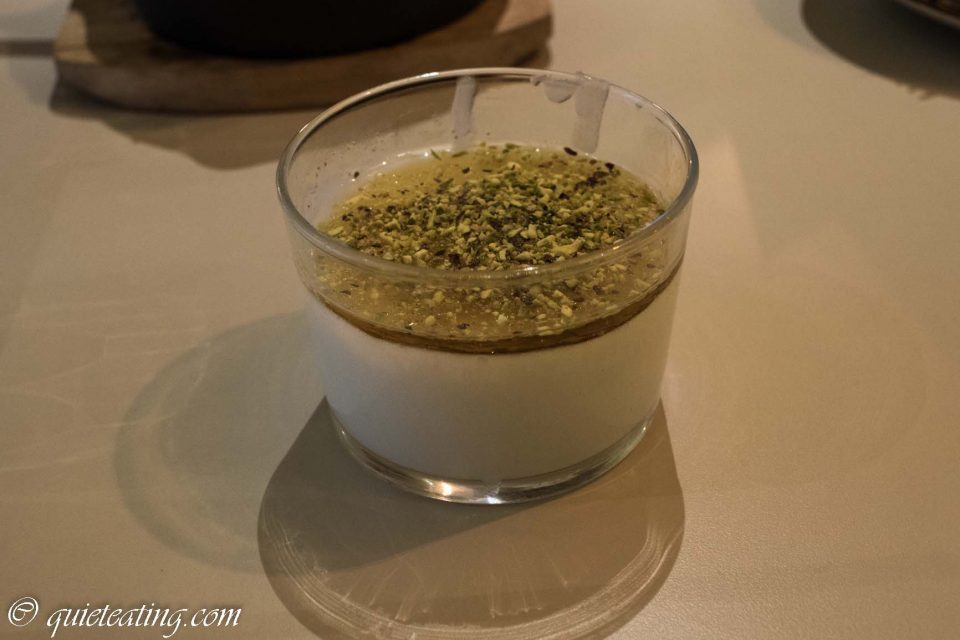 Muhulabieh, rose scented milk pudding, crushed pistachios and orange blossom honey.  Something to love if you have a sweet tooth. 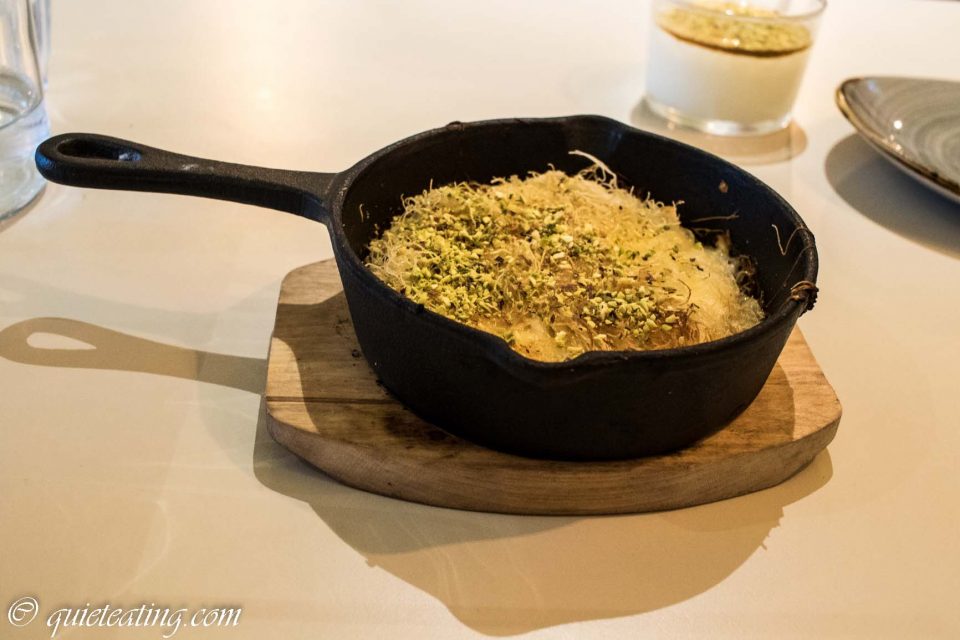 Knafeh, akkawi cheese, kataifi pastry and orange blossom syrup.  Probably the highlight of this meal.  It was crispy, sweet, crunchy and hot.  A delightful way to end.  If there is one reason to swing by, this is it.

With a lovely refubrished interior, this is a great place to kick your heels back, take a breather and have a refreshing lemonade.  With a sometime tropical drink like this in hand, it is particularly apt as an oasis to escape the madness of nearby Oxford Street and Soho.  So if you are getting tired of fighting the hordes and looking for something to eat, you might, or I should say maybe, want to swing by Tabun Kitchen.

We were invited to review.  Estimated cost (3 courses) was GBP30 excluding drinks and service.