When I was out and about on an evening night and in the city needing a bite to eat, at first I thought there would be a multitude of sins; sorry, foods, to enjoy.  Unfortunately, it seemed like many places were choc a block full or otherwise beyond budgetary constraints.  Slopping with dejection from one establishment to the other, we finally found a place which had some tables.  In an additional piece of luck, it served what we were both secretly hoping for, nihon tabemono (Japanese food).

The place was carefully tucked away in a basement, just off the busy thoroughfares of the city and seemed bustling but not too busy to the detriment of the service.  It even had a tatami seating area.  Interesting.  Perhaps I had stumbled into a Japanese salaryman haunt.  Now all they would need would be some karaoke rooms round back to complete the picture.  Or perhaps a hidden door for inebriated customers to make a stealthy exit.

Once we had settled down a bit, we were presented with some rather large and extensive menus.  So much so, that I was tempted to ask if there was some Japanese food that they did not offer.  However, I repressed such a desire as they had not done anything to deserve it.  Unlike other places I have been.  So I held my tongue, difficult as this is becoming lately. 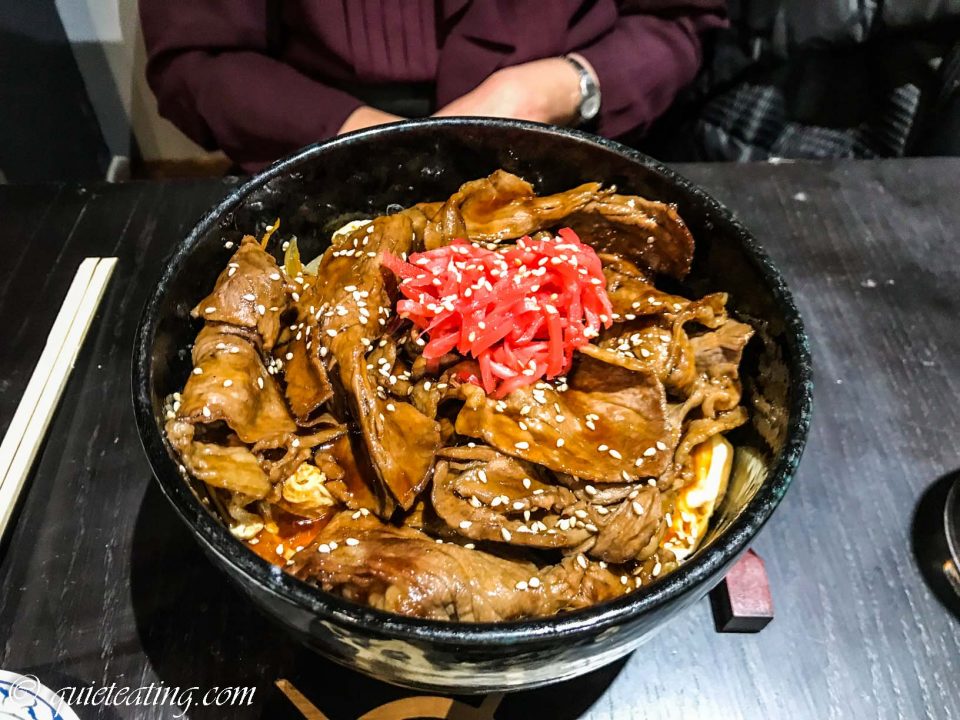 Gyu don, sliced beef sirloin cooked with egg in teriyaki sauce with mixed vegetables.  It is perhaps fitting that I was eating beef as now I know a little about what being a cow is like.  Find grass.  Bend head.  Pull up roots.  And chew.  Chew.  And if you have more time.  Chew again.  And if that isn’t enough and you aren’t done, swallow and regurgitate to have another go again when you have a moment.  This food was so sadly overcooked that it felt like I would have to try and reduce it to a paste in order to get it down.  I now have gained greater appreciation of what it is like to be part of bovine kind, so it kind of put me off beef for a day or two.  Not because I was turning vegetarian but because I felt I had had enough of that monotonous grinding motion between the molars. 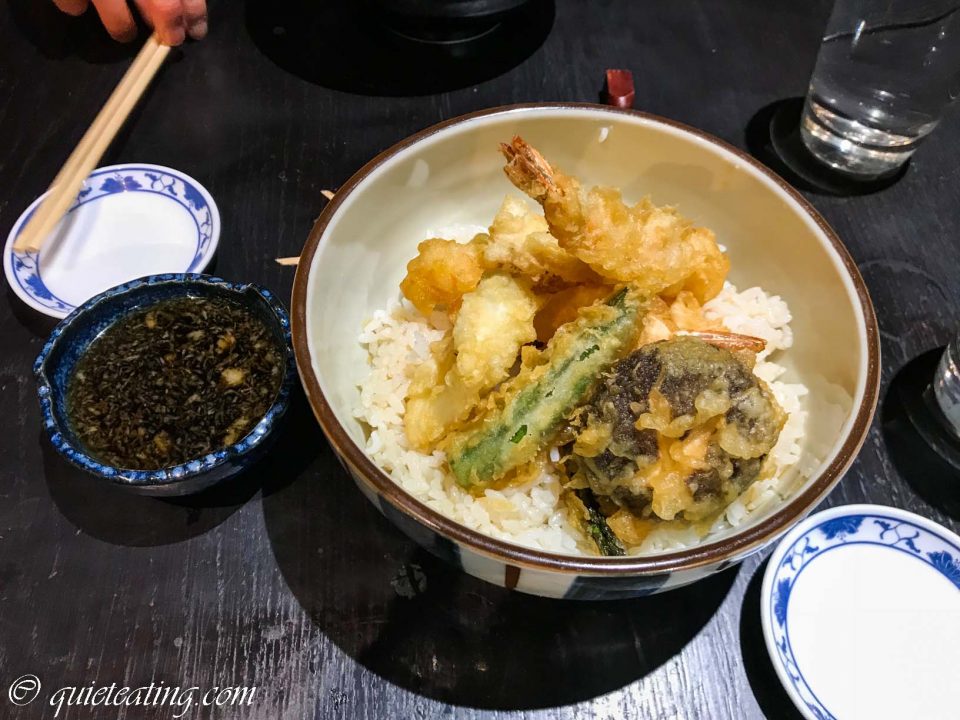 Ten don, deep fried prawn, fish and vegetable selection.  The ebi (prawn) was not bad, the ayu (white fish) less so, the nasu (eggplant) infused with oil creating silkiness in an unwanted direction and the piman (bell pepper) just tasted of nothing.  Although I guess there is something to be thankful for, that there wasn’t too much work needed before you could swallow.  Also, the portion size was a bit meagre.  The rice was nice and generous though.

I guess I shouldn’t be so hard on the place.  It is better than the Itsus and Wasabis of the world.  At least they try to create some element of premium with their food served in real porcelain as opposed to plastic containers.  However, I find it a bit difficult with its consequential justification of doubling the price.  I think the best way to sum this up is overpriced and in a basement.  Where the score belongs.