Ironically, we arrived in Spring in autumn.

Spring seems to be associated with changes, new beginnings and a chance to start anew.  Almost as if the new year had rolled around again.  Well, at least this seems to be the case in the gym as the grunting multitude increases substantially.  So much so, that on a recent visit, I could hardly find a space to stand.

Yet when I was happily ensconced in my corner, another problem came along.  It came in the form of a gym uniform demanding that I watch it.  Stop banging the weights!  Well mate, I thought this was a gym where, you know, those type of things are expected.  Alternatively perhaps he would prefer it if I joined the surrounding cohort and exclaimed so loudly that it almost seemed like someone was giving birth.

In any case, putting my morning behind me, I arrived ready for fresh, clean and new beginnings at Spring. 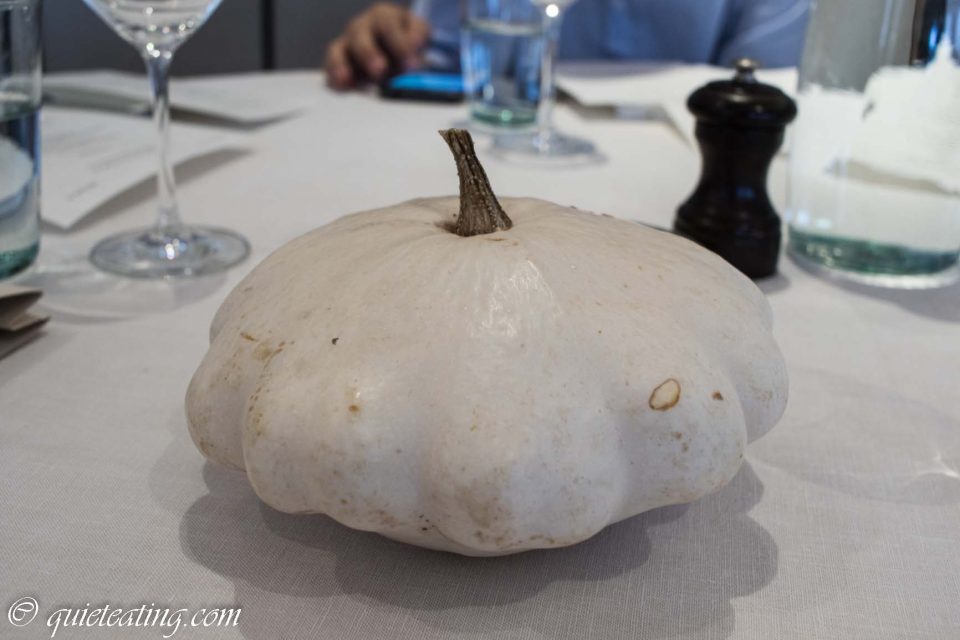 This is what first greeted me.  This is not a prop.  It is a real fruit.  A gourd.  As one of my fellow diners pointed out, it could serve a dual purpose of providing table decoration and if you got particularly annoyed by a table companion, providing a hard heavy object to bludgeon them to death.  Although there are worse ways to go, this would be close to the top of embarrassing ways to end. 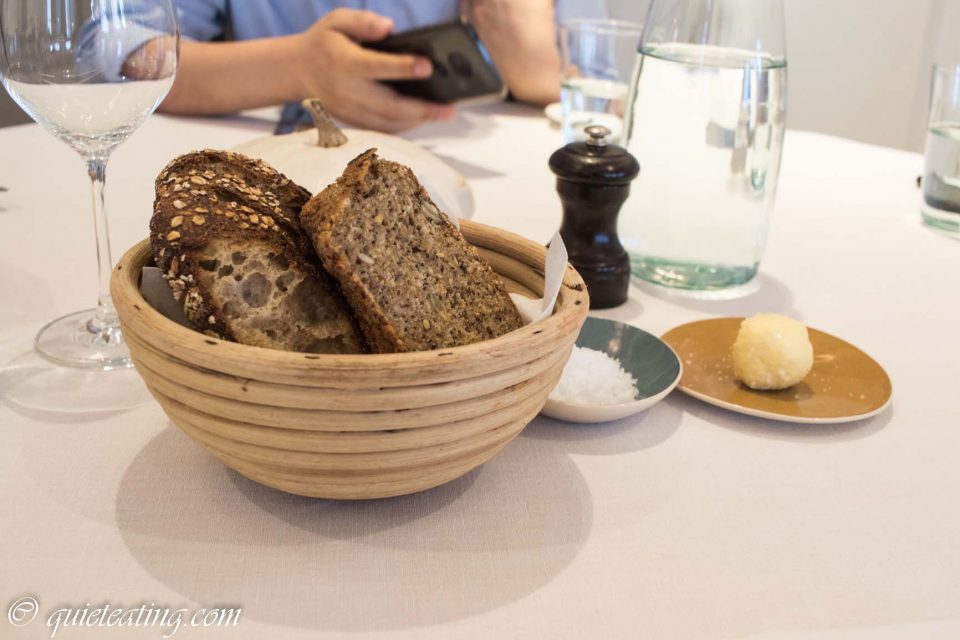 Seeded bread and sourdough.  The seeded bread was healthy and dense.  Not bad.  The sourdough had lovely bounce.  It was great with a bit of butter with a sprinkling of salt.  My hopes were built up. 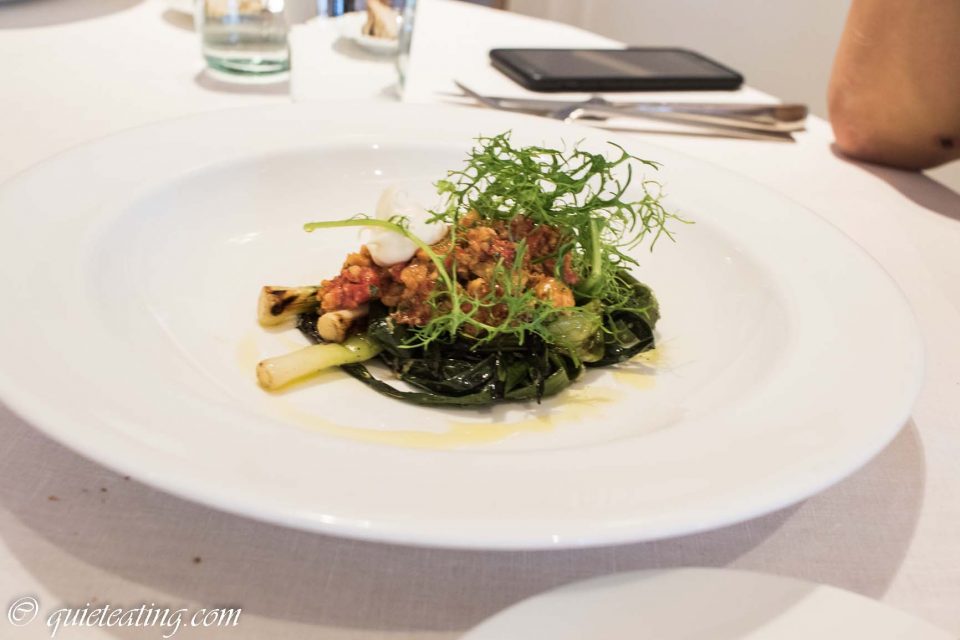 Fern Verrow leeks with romesco.  Rather fancifully dressed up vegetables, this was rather good.  Soft leeks, deep flavour of nut and tomato puree, this was a clean and great way to start. 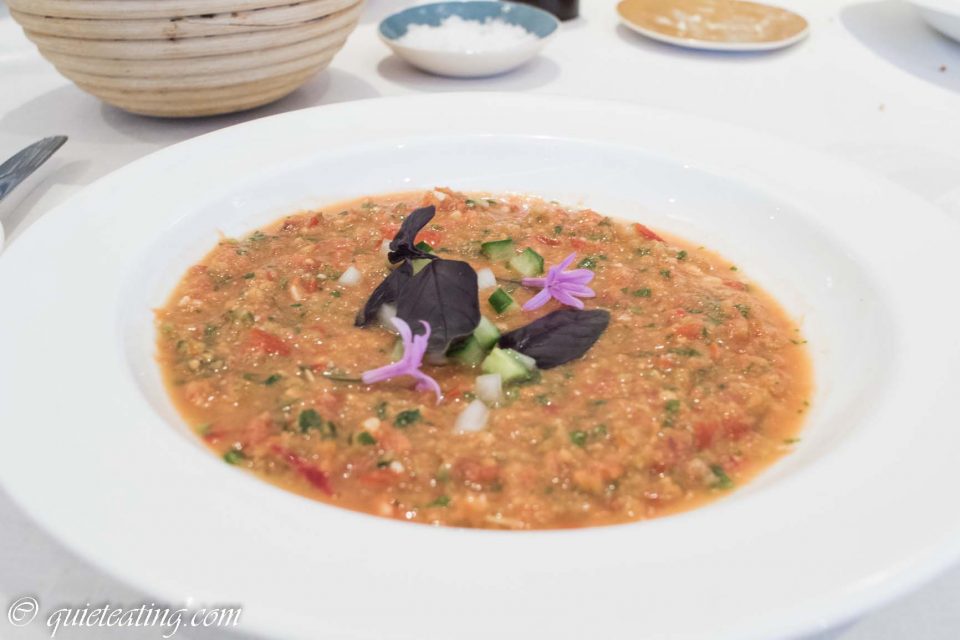 Gazpacho.  The other starter in this two choice lunch menu was decent, if not as good.  Carefully chopped tomatoes mixed with other vegetables.  Could have done with a little more kick though as it seemed a bit bland.

As the leeks showed things could go rather well here.

That is, if they arrived.

Apparently, Spring is not in the air in the kitchen, as we were subjected to a lengthy pause between our first and second courses.

Then another 20.  We enquired if the chef had maybe got lost on the way to the kitchen.  The reply we got was that it was coming in 3 minutes.

Then finally the main courses arrived.  I thought that they better showcase careful and laborious preparation!  I was wrong. 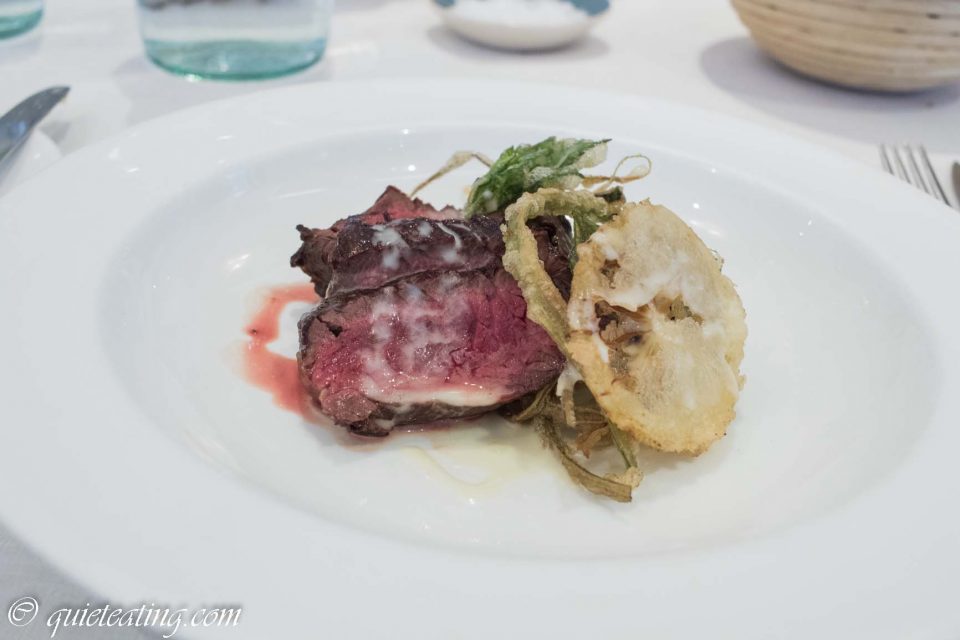 We were warned that these would be served rather rare.  That was an understatement.  When I can see the glistening of the meat in that rather uncooked form, I usually get excited.  That is when it is slivers of raw food served in a Japanese restaurant.  Instead here, we had slabs of cow that in their rush to serve me, they had only seared for a few seconds on top.

I struggled to understand why, with so little cooking of the meat, what had taken them so long.  Were they trying to chase down the cow and convince it to give up a piece of its flesh?  Was there a slaughterhouse at the back of Somerset House to ensure that everything was as fresh as humanly (or perhaps I should say bovinely) possible?  Or instead, was it a matter of simple human inability?  Let’s not forget the deep fried vegetable on the side.  That was excellent by comparison, mainly because it seemed to have some modicum of care used in its preparation. 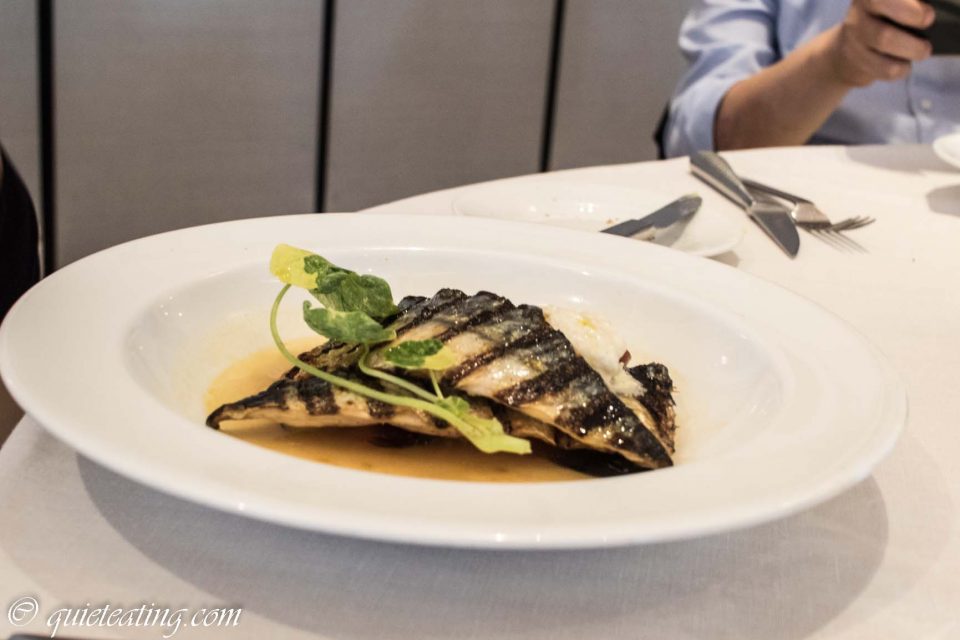 Grilled mackerel with tomato water and horseradish.  This was excellent by contrast.  It won that competition by being cooked! 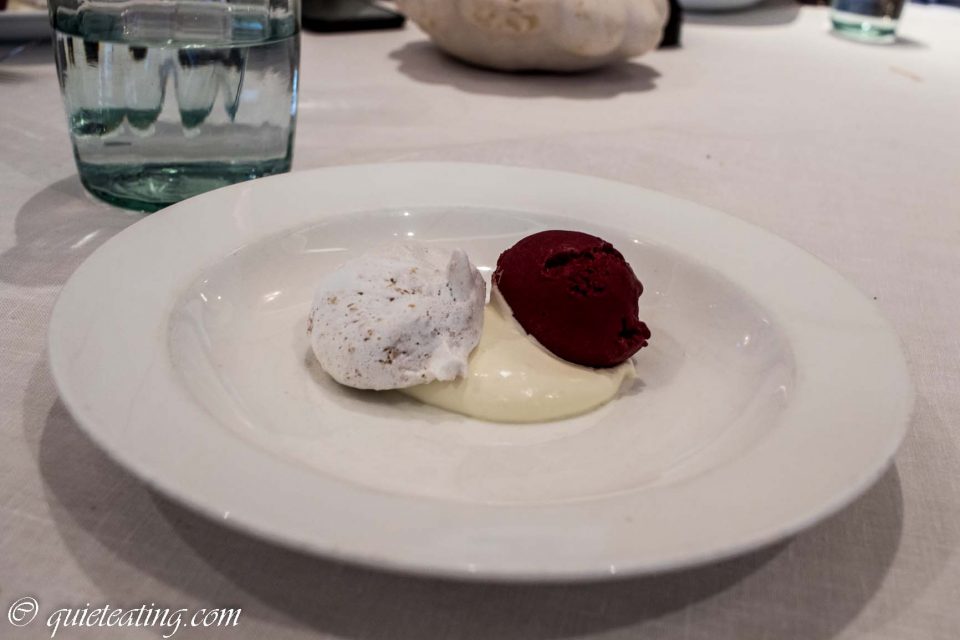 Hazelnut meringue with autumn berry ice cream.  At least this arrived in a rather timely fashion.  Perhaps 10 minutes after the mains were cleared away.  The meringue was nicely nutty, the cream clean and fresh, the berry ice cream sweet but not too tart.  A good spring dish.  Then again, it had a lot to make up for.

Now that I’ve enjoyed Spring, I’m curious about the other seasons.  If Spring is so interesting, what happens with the other seasons?  Perhaps if we go for Winter next, everything might come in ice cubes.  Well, at least that might be an improvement on this spring season.