There seems to be a fad going around the city nowadays.  Maybe a reflection of the undercurrent of rage in London, at a gym in London, photos of various notable politicians are stuck on punching bags.  The idea is that you can vent your anger with righteous fists of fury.  As an alternative, if that is not your style, you can play out your fantasies on the printed floor mats where you slam a medicine ball resolutely down on to the offending visage.  Yet if neither of these is your cup of tea, you can instead casually trod on the unseemly countenance as you roll up for the morning workout.

Yet perhaps there is a more socially beneficial outlet to taking out your anger.  Kneading and slamming some dough.  It would seem more constructive than indiscriminate violence.  This is where the Dusty Knuckle comes in.  It is one of those unusual things, a social enterprise that not only helps those in need, but also produces something rather good to eat.  It channels energy into making good food as the kitchen staff is made of those that might find it hard to find employment elsewhere.  Starting out from a modest container, it has now moved to more permanent digs at Dalston Junction. 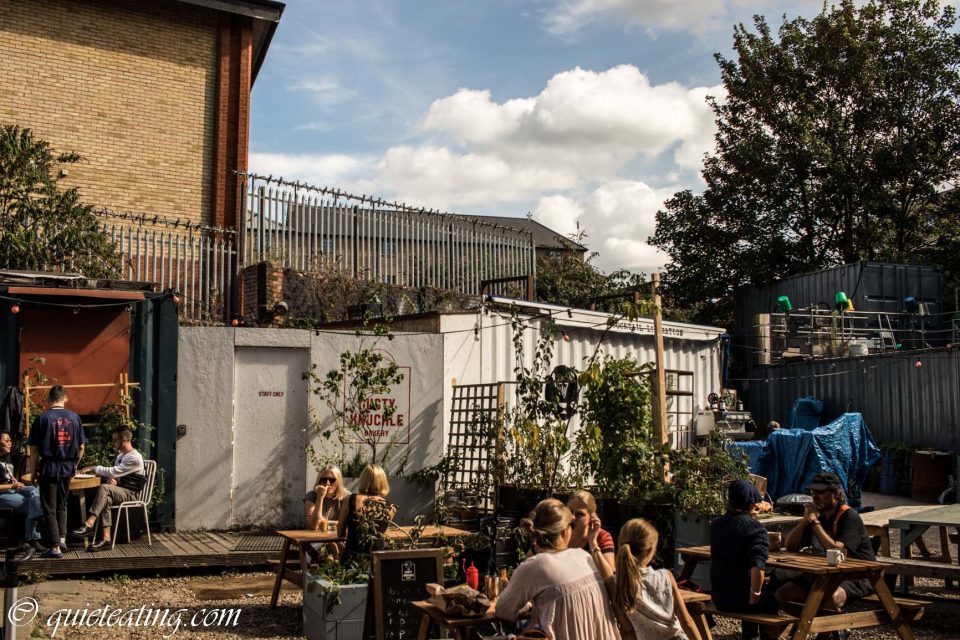 The back garden where you can sit for a drink. 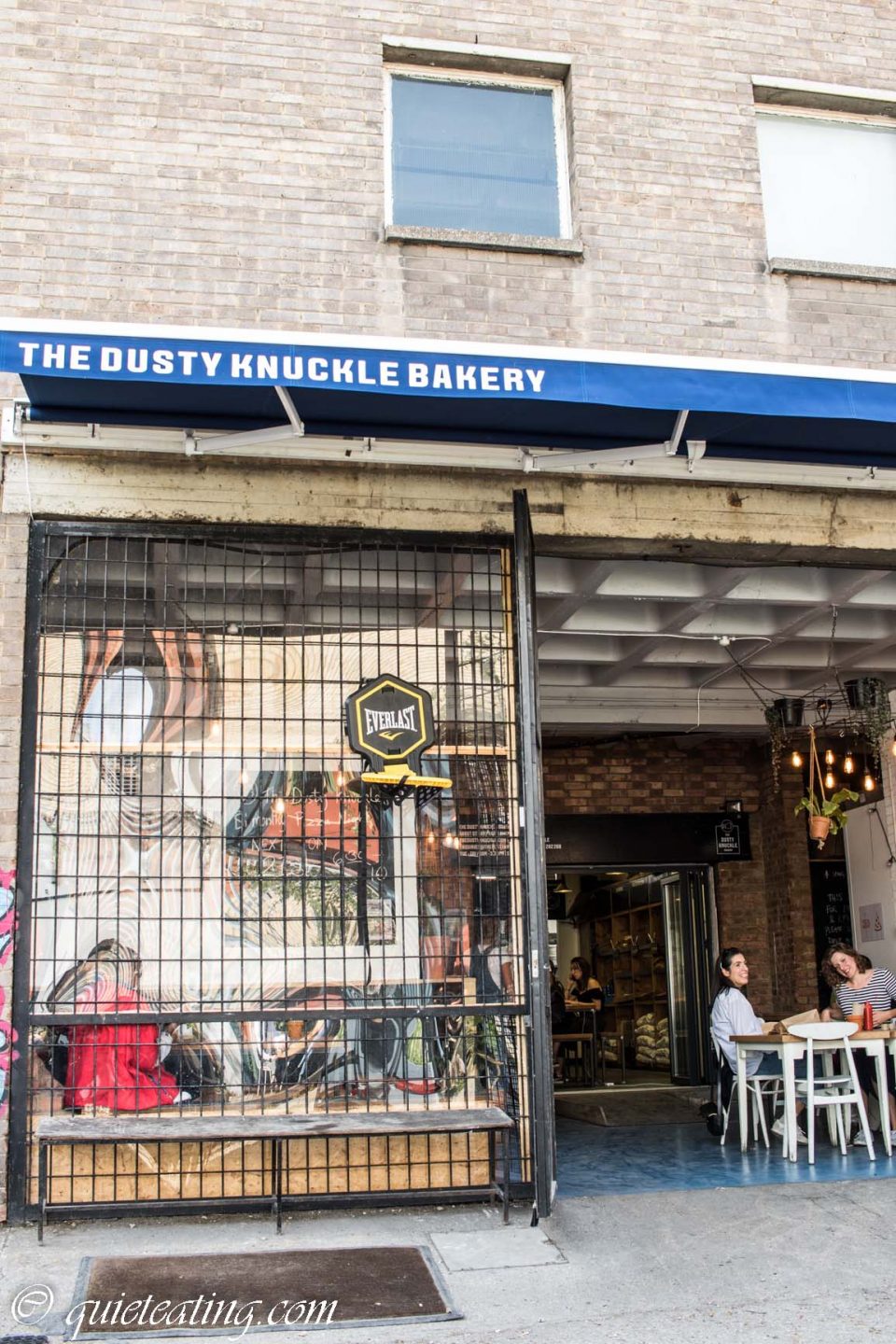 The entrance to the bakery.  The chequer cross grating helped to emphasise its edgier side. 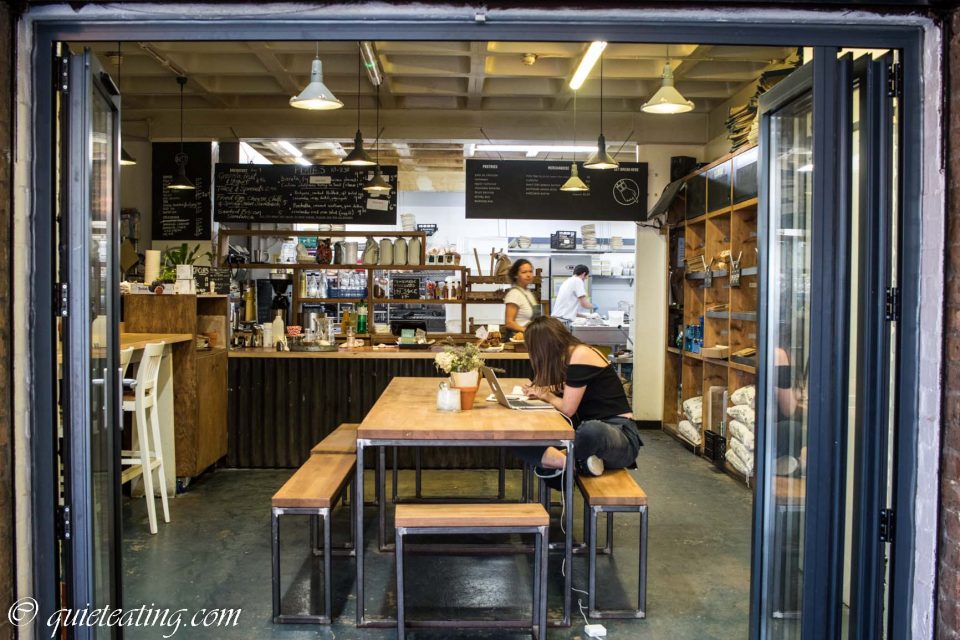 The bakery itself.  With such staff credentials, it fairly screamed trendy to the high heavens and with required hipster props in place – cue cross-legged, baggy clothes-wearing iBook user on communal seating – all the elements of a more trendy scene were in place.  Now, it was time to test if the food measured up to expectations. 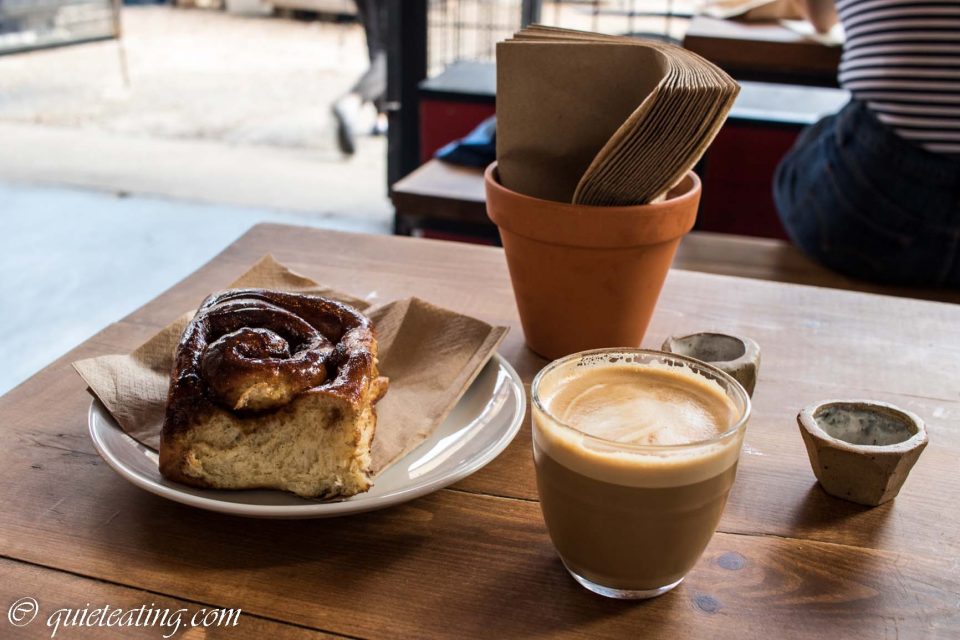 Sticky bun, latte and flower pot.  The latte was ok but there is a better place just around the corner.  It just wasn’t as creamy as I was expecting, although I admit that that is down very much to personal preference.

The sticky bun was decent but sadly tasted like it had been sitting there for a while.  Perhaps its warmer and softer cousin might have hit a better note.  Yet, I think it might have been an off day as I’ve had their bread elsewhere before and it was great.  Maybe today was not such a good day for me.

Amongst some thoughts, what I must commend them for though is that they completed the requisite ambience with a flower pot for napkins.  Perhaps in other countries, this might be seen as something disgusting (try that in China and see what response you get) but here the terracotta instead denotes a rather more laid back environment.  Unfortunately, maybe that’s what lead to standards slipping a bit.  Too bad for me.

A coffee and bun was GBP4.50 excluding service.