There is sometimes reason to applaud bravado.  Here I must clarify, I do not mean that rather irritating braggart that you might remember from school but rather something more mature and in the business world.  Although the danger is that if things do not go according to plan, such places may be subject to much ridicule.  Especially by pesky food bloggers who don’t know better.

The name Simon Rogan carries particular weight in my mind, as I had always dreamt of one day visiting the enigmatic L’Enclume, in the far away Lake District.  It seemed to be on every serious foodie’s tongue.  Lucky for me, I was spared such trials when he opened, Fera, just a quick tube ride away.  Everyone else seems to think it hits the spot too as the prices keep hiking and the line gets longer.

So imagine my excitement when I heard that he would be moving over to head his own restaurant, named rather imaginatively, Roganic.  A mashing of what I assume is Rogan and organic.  Kind of reminds me of hangry, hunger and angry.  Or perhaps mansplaining, man and explaining.  In such an environment, I assume the idea is that “Rogan” would be able to grow his world “organically” (I’m so clever) as he would not be beholden to any restrictions.  Unlike Fera where he was perhaps subject to directives from Claridges, Fera’s home.  Instead he would be free to do whatever he wanted. 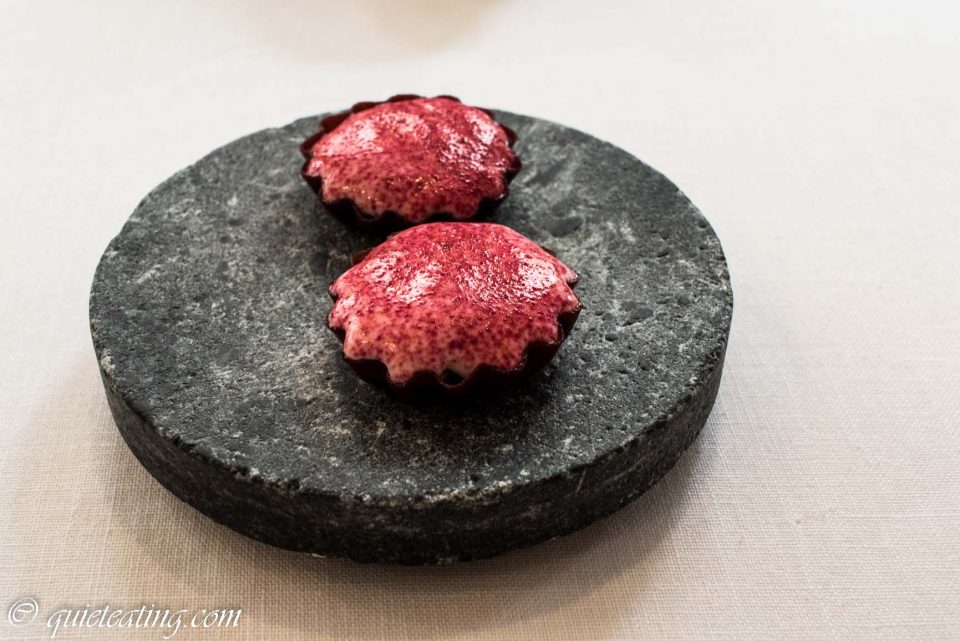 Preserved raspberry tart.  The first amuse bouche was in one word, extraordinary.  Sharp, creamy and with delightful base, it was a good thing that there was only one per diner, as otherwise I would have gorged myself silly.  When there is good food in front of me, sometimes I lose a bit of self control. 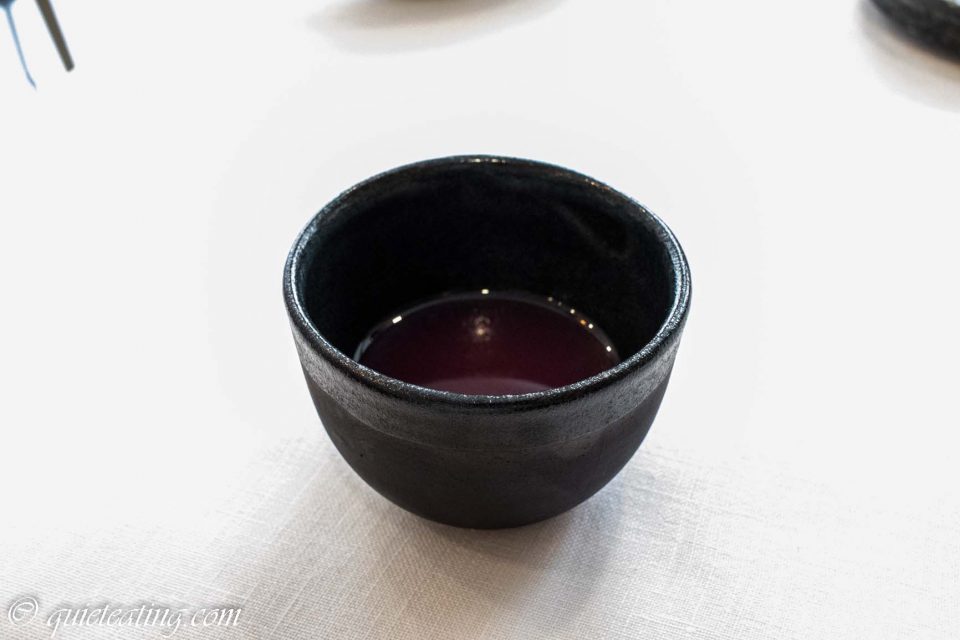 Fermented red cabbage and apple.  An interesting touch.  The tart and savoury juice was an ideal interlude for the next bite.  It prepared the palate for something great. 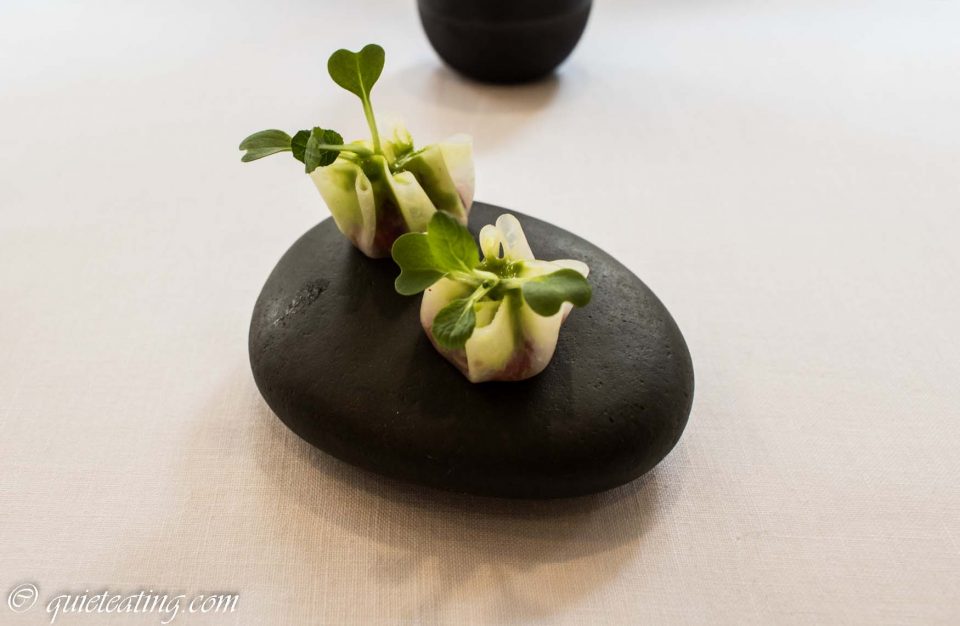 Raw beef and kohlrabi. Meaty yet delicate and clean tasting.  It reminded me of siu mai, the Chinese dumpling.  What struck me most about this as I picked it up, was the bounciness of the wrapper.  It tasted as good as it felt, silky smooth. 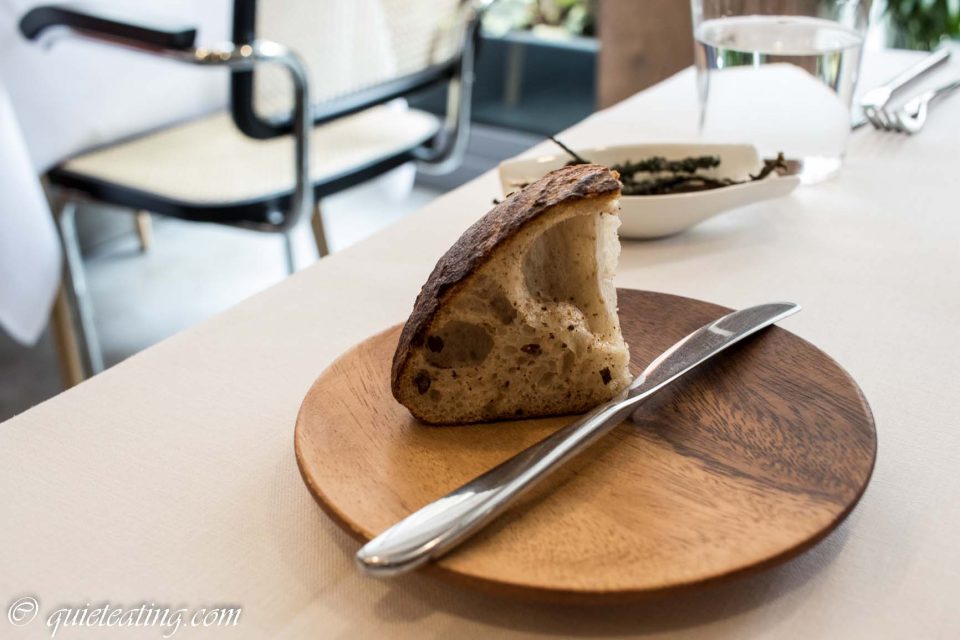 Bread.  Spongy and with crunchy body.  Although, picky person that I am, I preferred the sunflower bread from Fera.  If the bread was like that, I could eat it all day.  Instead it was good but not great. 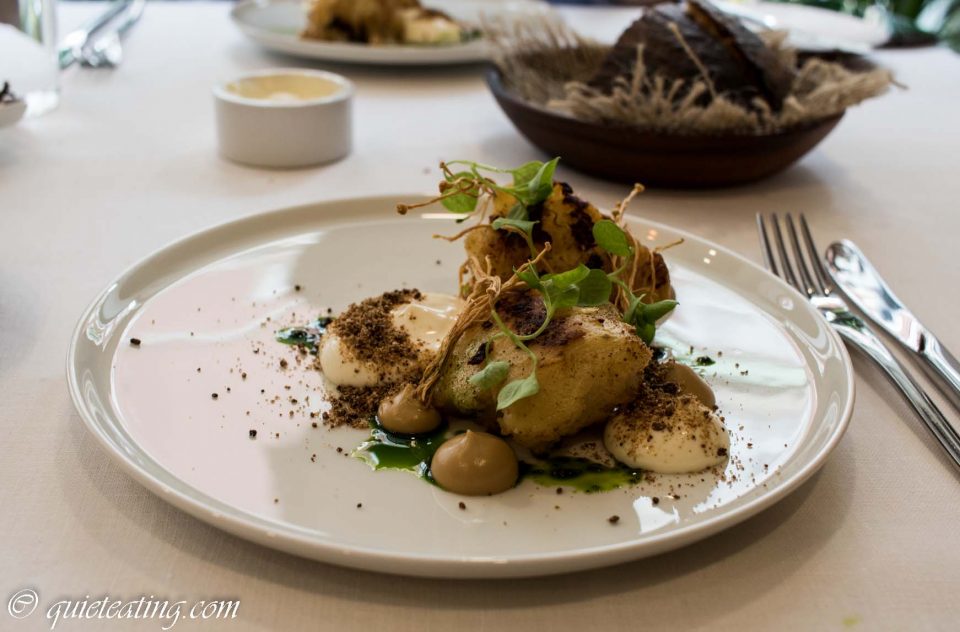 Salt baked celeriac, enoki and whey.  I don’t think I have ever eaten celeriac like this before.  In generous portions, it had a clean taste with body.  This served to delight when combined with the sauces. The enoki gave an excellent savoury touch.  This was probably the highlight of the meal. 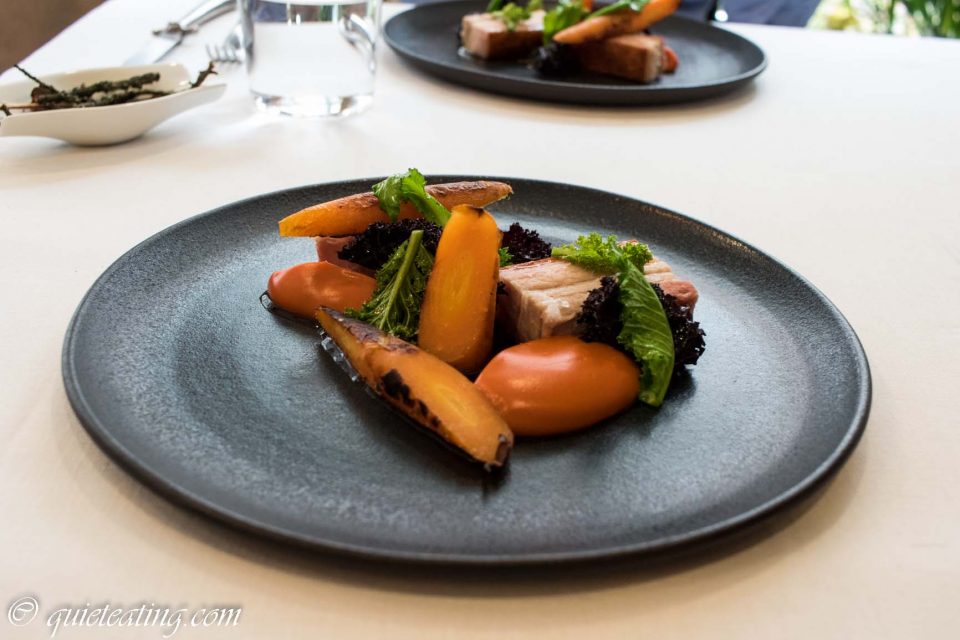 Pork belly, carrots and kalibos.  Barbarian that I am, I was disappointed as it did not live up to the standard of what had gone before.  This was an example of letting the taste of the food shine through.  Although I am sure that some would enjoy this, it was just a bit too simple for me.  It was only decent. 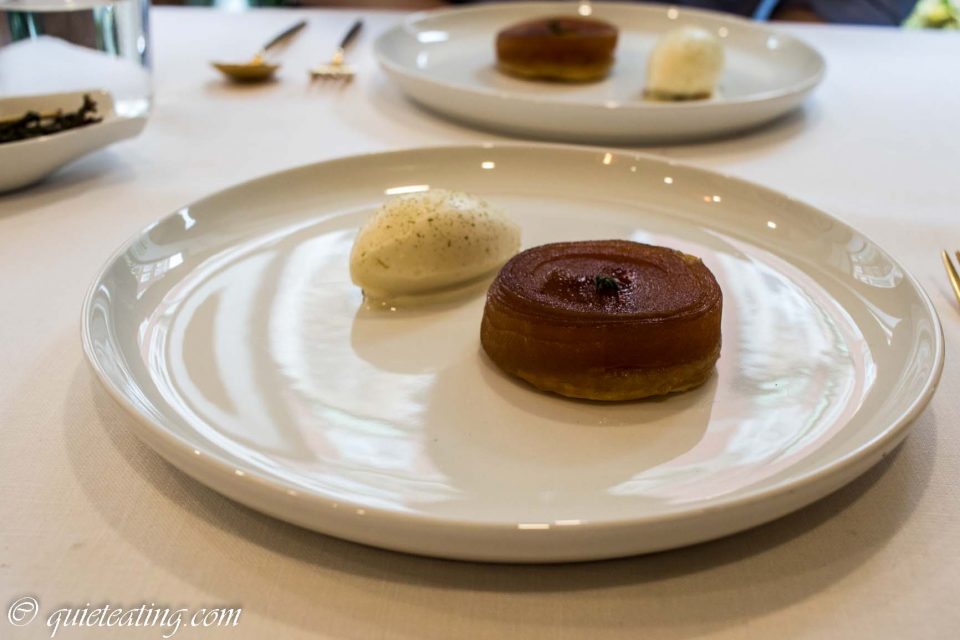 Caramelised apple with douglas fir ice cream.  The apple had been subject to what I guessed was an extremely labour intensive action.  As it was cooked and then layered carefully into concentric circles.  The ice cream was a good comple,ment.  Yet at least for me, it didn’t really contain an extraordinary surprise.  Instead it was just not bad. 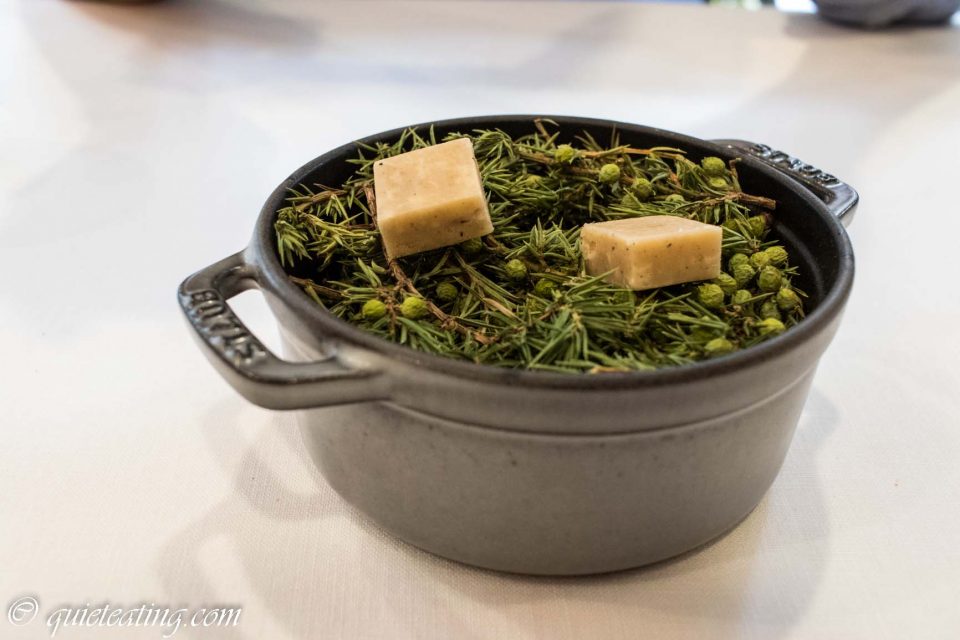 Smoked juniper fudge.  Presented beautifully, tasting rather interesting.  Fudge which wasn’t too sweet or cloying with a hint of berries.  Not bad, although the rather limited portion was a bit of a disappointment.

The meal starting off on a high but sadly spluttered out by the end.  I do caveat that maybe this style of food just isn’t for me.  Others may score it more highly.  Although I think the major problem with this that soured the experience was that I walked away hungry.  I know I was eating their cheapest menu but at GBP40, I expect to leave with a full stomach.  Although maybe one of the newest words to enter the Oxford English dictionary along side hangry and mansplaining best describes me.  Someone being overly sensitive (and critical).  In which case, perhaps “snowflake” is the right word to use to describe me.