This review is in two parts, due to a repeat.  This is unusual but not unheard of on this blog, as I like to give restaurants the benefit of doubt when bad things happen.  Although the majority of restaurants ignore me when I ask nicely whether there was a reason why their food was not up to scratch, others respond quickly for a second chance.  Thus, when availed of the opportunity, I feel I could do nothing less than try again.  The first review follows the second.

I’m all for second chances.  However, generally the world seems to think otherwise.  Make a mistake once and it will be brought up time and time again.  Social media makes such punishment easy, repetitive and free of charge.  Kind of makes me scared of typos in my posts as I’ve had plenty of personal experience of people providing unwelcome commentary on my posts.  Sometimes the remarks (usually to my face) can become vicious.  Although, that is probably fair given that I delight in providing, in most cases, unsolicited reviews of restaurants.  To counter this, I do wonder if I should construct a scary persona.  Just like the person you NEVER ask for help because you are afraid they will take a pound of flesh as payment.

Thankfully for me, Madame D was gracious enough to offer me a second tasting on them after the first event had gone so bad.  Naturally, we asked them to hit us with their best shot, given that they were seeking redemption.  In my heroic stand for foodie-kind, I would take whatever they threw at me. 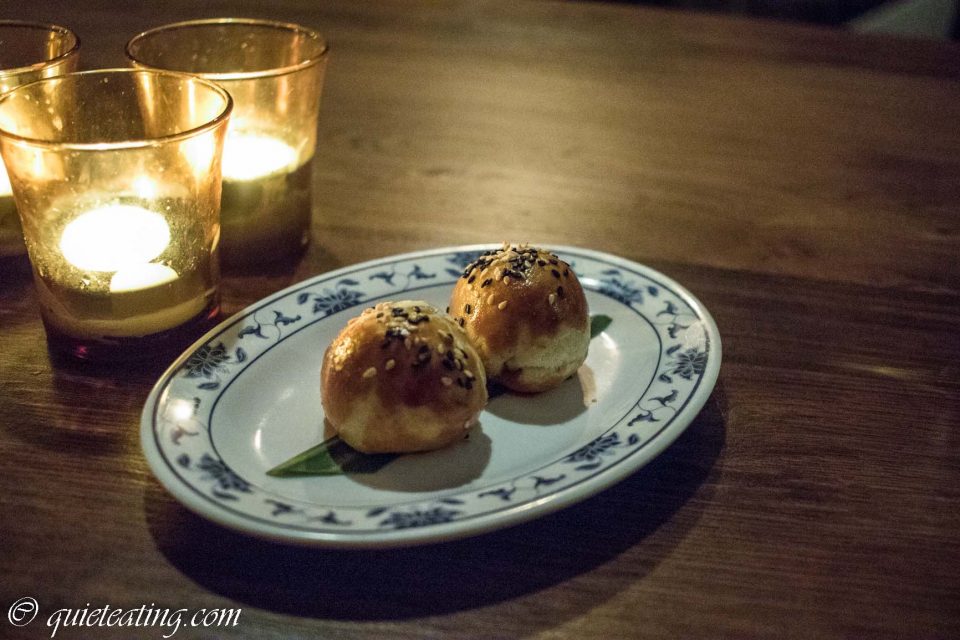 Naga beef chilli puff.  This looked and tasted like char siu sou, the Chinese roast pork puff pastry.  Except it had a slight sourish spicy tinge, no doubt due to the chilli. This was pleasant although not really hot. 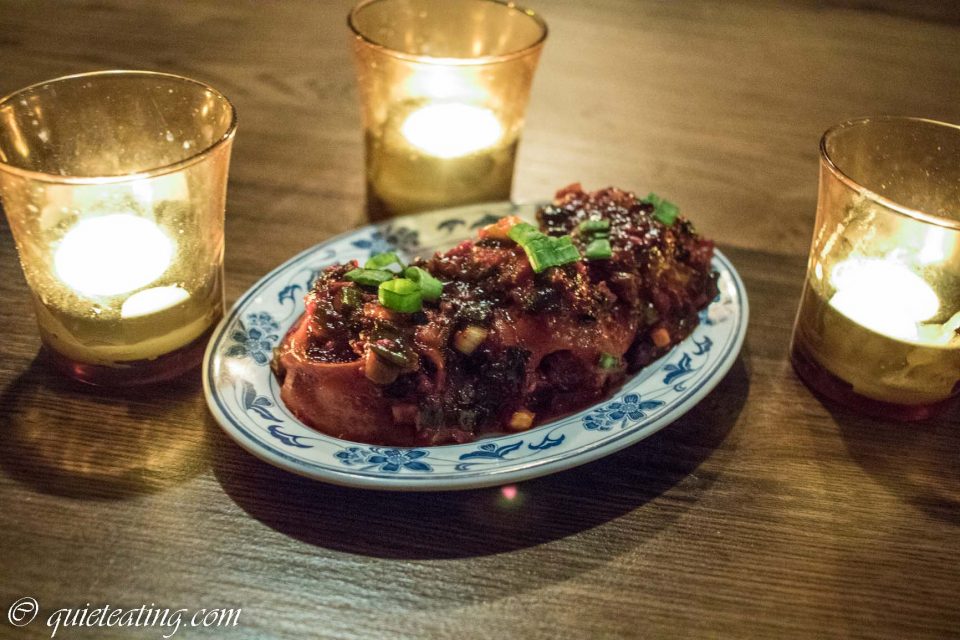 Vegetable momos pan fried in garlic and chilli sauce.  I think the best way of describing the momos was that they seemed a bit too heavily laden.  Much like an ocean steamer with a bit too much cargo, it rode a bit low even if the sauce tried to lift it up.  Sadly the sauce wasn’t enough to overcome too much ballast. 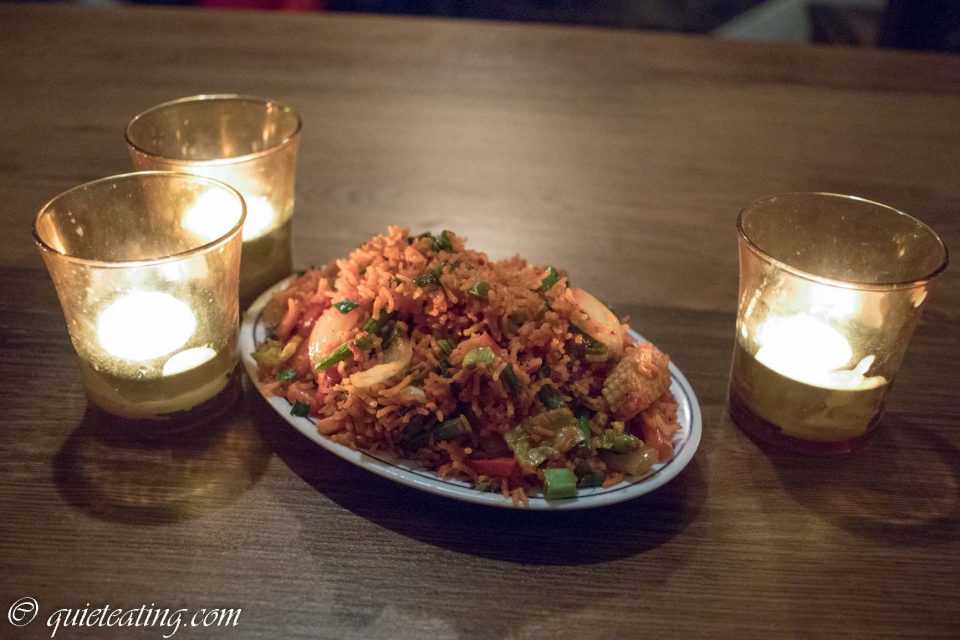 Vegetable fried rice.  Ok, although lacking a real stand out taste.  Decent to accompany other dishes though. 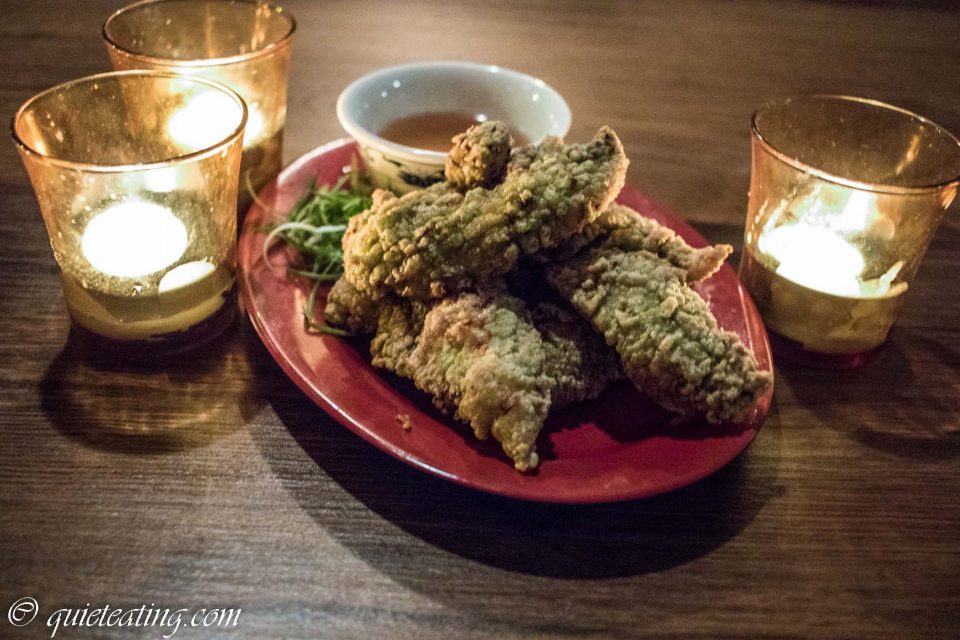 Himalayan fried chicken.  As you can see below, this is what had originally led me to this restaurant.  This time, it was far superior to the last visit.  The chicken was crisp, moist and had a decent amount of taste.  Together with the fish sauce, it was pleasant even if it wasn’t going to win any fried chicken awards. 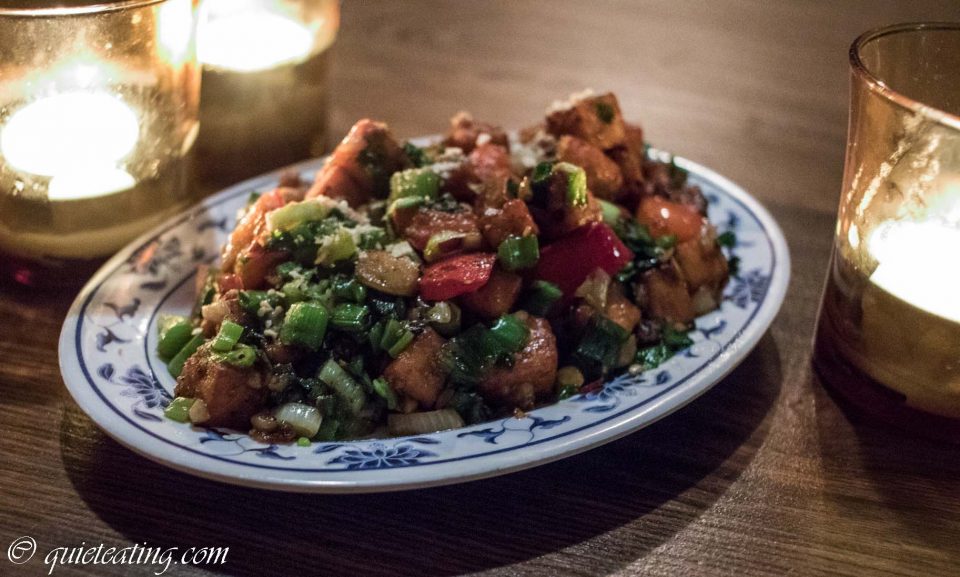 Hakka chilli paneer.  This was the surprise of the night.  Small cubes of paneer fried with various vegetables and spices, this was the best dish of the meal.  It hit all the right notes of savoury, salty, umami and spiciness.  In particular, I was surprised at how with the first bite, the paneer made me do a double take.  It almost tasted like meat.

I’m glad I gave them a second chance, as this time was much better.  Perhaps this provides evidence that everyone deserves a redo when things don’t go that well.  When the stakes are as great as your dinner, sometimes it might be worth it.

Perhaps I should immediately turn around and exit when I sense a group date in play.  That seems to be a sign about the relative importance of drink vs food.  Whilst waiting for a waiter to notice us (the restaurant was less than half full but we were left waiting for several minutes) I couldn’t help but circumspectly eavesdrop on the conversation of the table in front of me.  They were talking rather loudly…  There were several signs which led me to believe that this was the English equivalent of a ごこん (Japanese group date).  First of all, there was an equal number of men and woman.  Second, there were many introductions being made.  Third, people did not look that comfortable.  They were all leaning away from each other as if they were being compelled to be there.  As for whether such compulsion was of their own volition (I’m lonely, I need someone to cuddle) or external (friends becoming a bit tired of their moaning, so trying to find a solution or at least someone else to fob them off) was immaterial to me.  As it was great entertainment.

Unfortunately, just as things were starting to get interesting, I was led away by a waiter to a table on a different floor.  So I mentally bid farewell to this group. I suspect that it went well as when I came by on my way out later, they were gone.  Although, it may have been for another reason, as the below details. 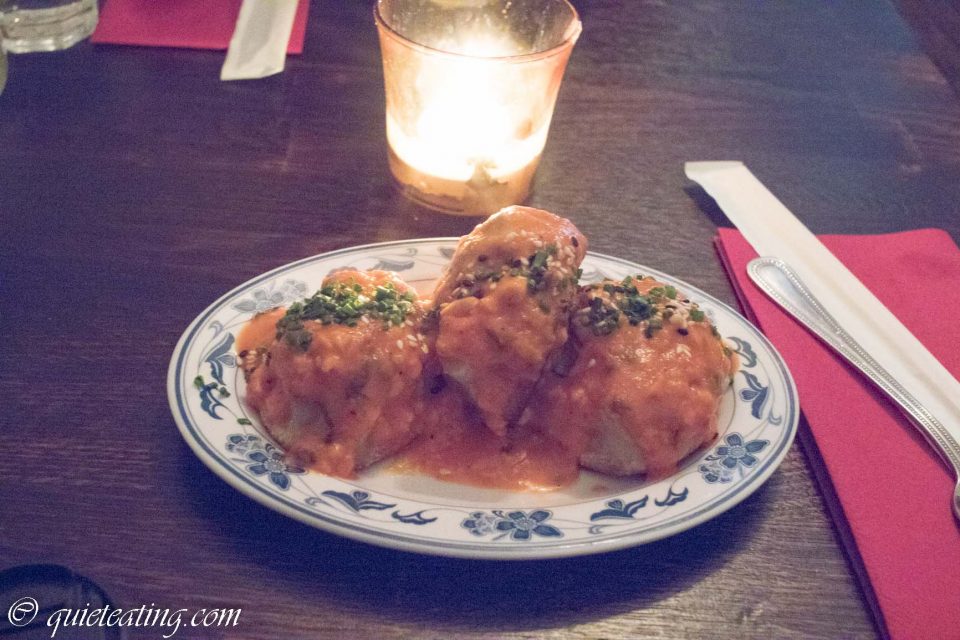 Pork momos pan fried with tomato and garlic chutney.  These were not bad.  Slightly crunchy exterior, rich sauce and decent filling. My hopes began to rise. 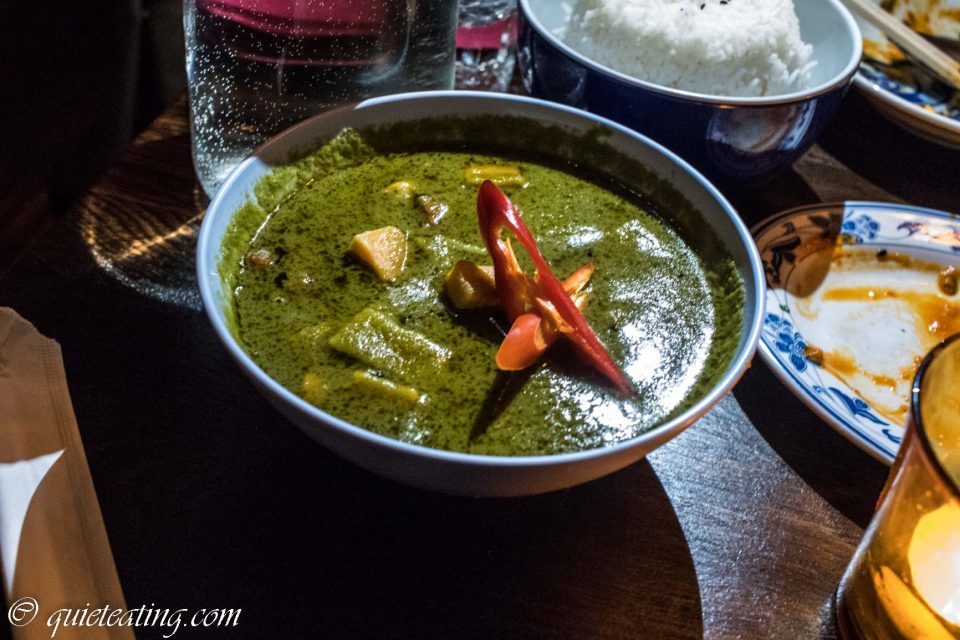 Kathmandu curry with bamboo shoots and sweet potatoes.  This looked good and tasted decent.  Although, I had suspicions about its provenance as the vegetables were cut into too perfect shapes, things were a bit too straight.  Almost as if they were manufactured.  The curry was also suspiciously flat, almost as if it came out of a packet.  Yet, perhaps this is my paranoia getting the best of me.  Perhaps it was just the kitchen showing surprising consistency. 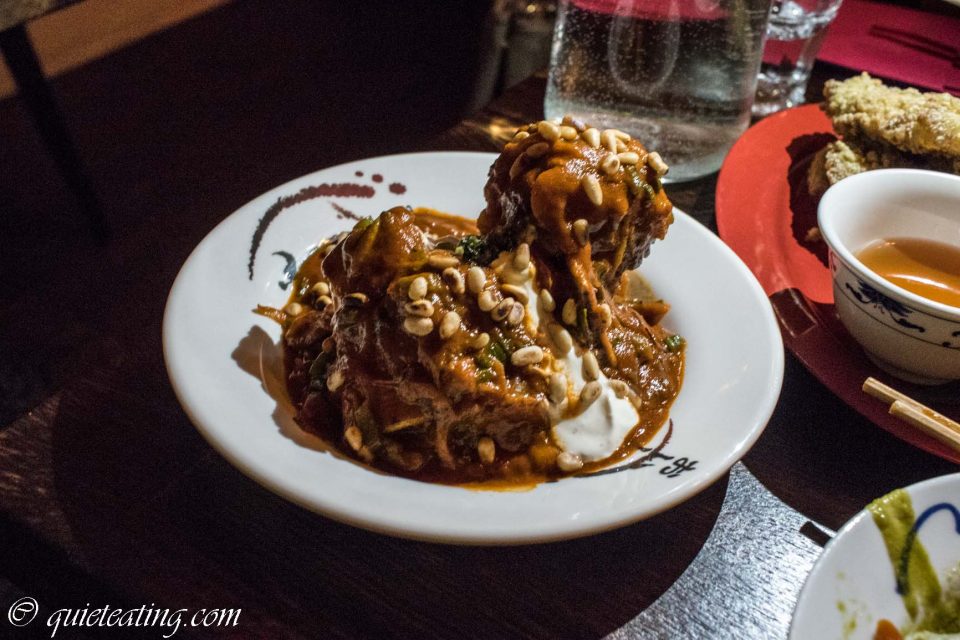 Masala beef ribs with Sichuan sour cream, pine nuts and coriander drizzle.  The ribs were rather large.  Which was unfortunate as they tasted of nothing and were rather unfashionably (and unhelpfully) tough.  Which made things interesting as the lack of knives required innovation and I tried to use chopsticks to saw away at the meat.  Don’t try that at home. 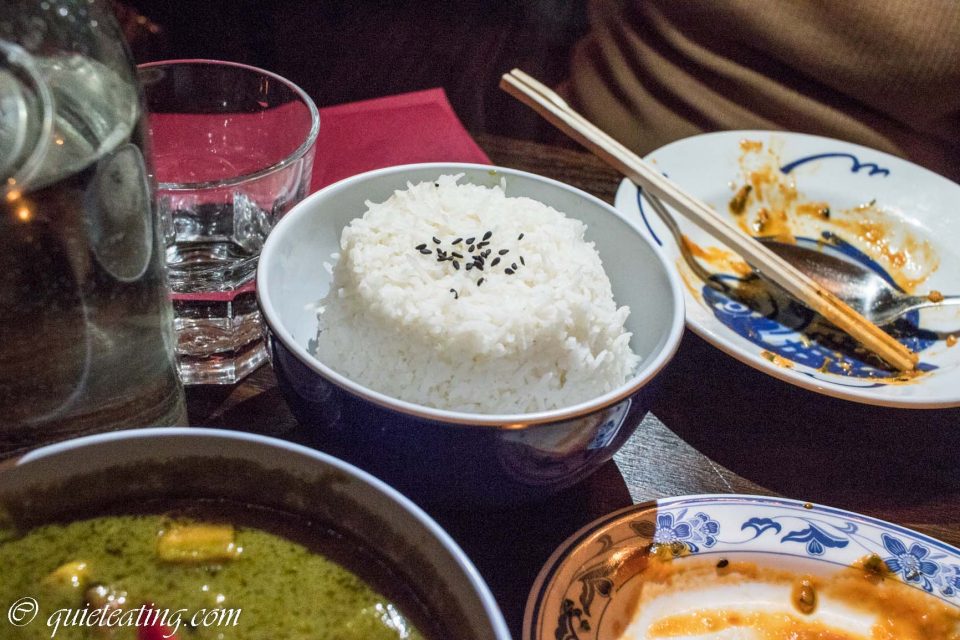 Rice.  Seems fairly familiar to Uncle Ben.  Yet, I admit that I was in a fairly sour mood at this point so perhaps this comment is unwarranted. 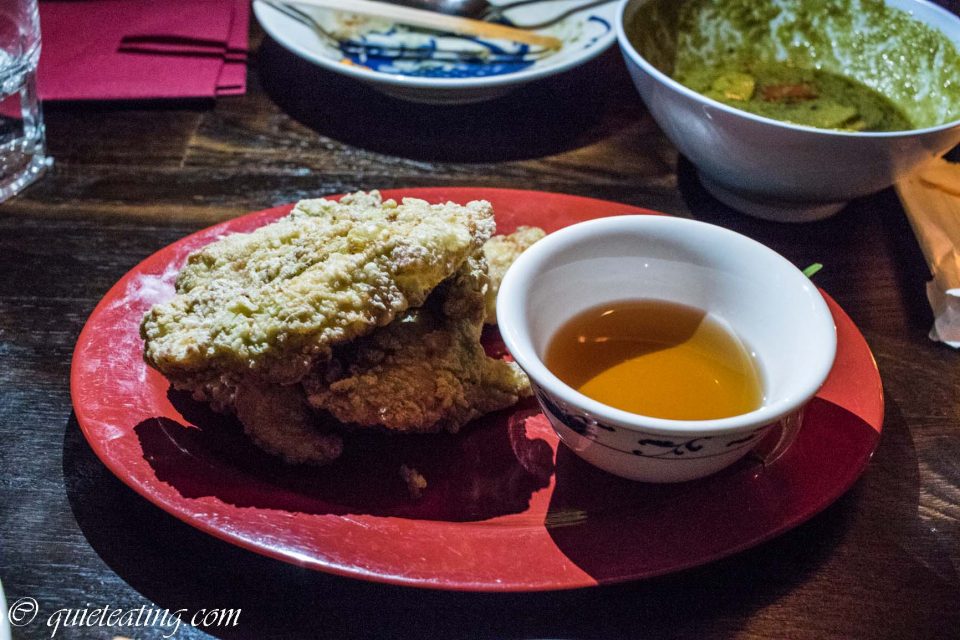 Himalayan fried chicken.  This was actually the reason I had come.  Lauded by many internet pundits, this was what had put them on my radar when I had a hankering for some fried goodness.  I was expecting something good.  What I got was rather soft, flaccid and tasteless.  It tasted suspiciously like chicken tenders out of a supermarket ready meal.  The fish sauce, insipid in its own sad way, added little.  This is a dish best skipped.

As I am a naturally suspicious (the less charitable might say paranoid) person.  I tend to think when something is too good to be true, it probably is.  Likewise, I try to be distrustful of what I hear in the media.  You don’t know what people could say in this day and age.  As I mentioned at the start of the post, it seems that other patrons were quicker on the update than me.  They fled the restaurant speedily whilst, hopeful person that I am, I stayed behind in vain expectation that things would improve.  They didn’t, so I should have followed the crowd.  Later that night as I reflected morosely on my experience, I had a little bit of a dig around their website.  It has a rather unusual boldness but sadly seems to be somewhat lacking and looks like a work in progress. Then again, it probably came out of a packet as well.

Dinner (2 courses per person) was GBP20 excluding drinks and service.

We were invited for our second visit.