With that statement aside, I must confess that I was in a particularly fine mood this sunny day.  The birds were chirping in the trees, the sun beaming down on me, the breeze (actually, it was more like a gale at times) was gently (or sometimes not so gently) tugging at my shirt.  Life was good. 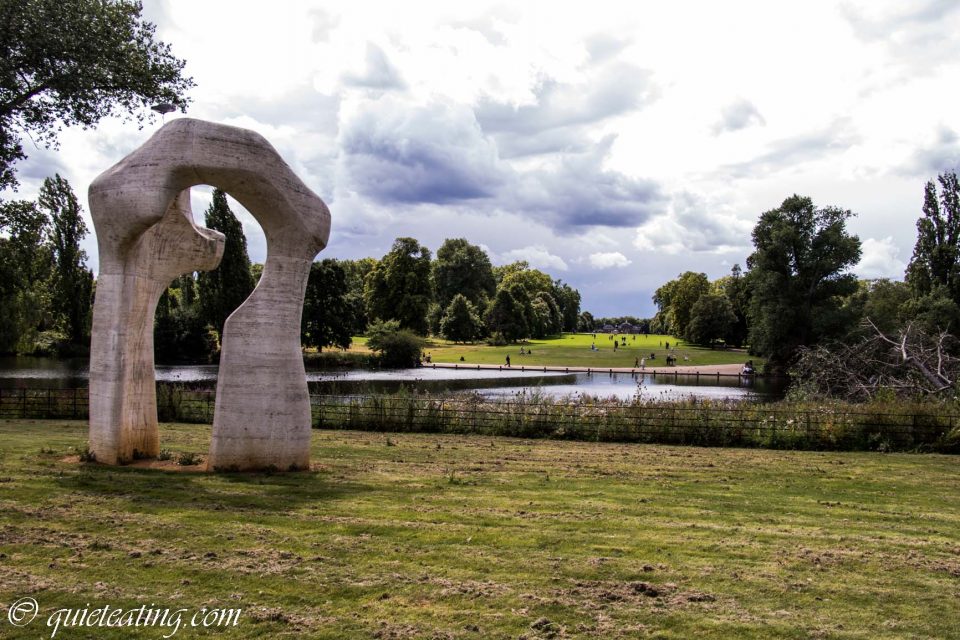 As I strolled through Hyde Park, I felt it was an ideal way to spend the weekend as I dreamed of what to eat next.  As I enjoyed the beautiful landscape I thought the only fitting complement to a day like this would be a most excellent meal.  So that is how I decided on Darjeeling Express.  I had heard many good things about it and had sadly missed its residence in a pop-up in the back of a pub.  Now I would be given a bite of the naan.  On the basis of its pop-up success, it has established itself in its own separate bricks and mortars spot at Carnaby Street. By putting much more on the line, I had high hopes of  great things.  The first dish did not disappoint. 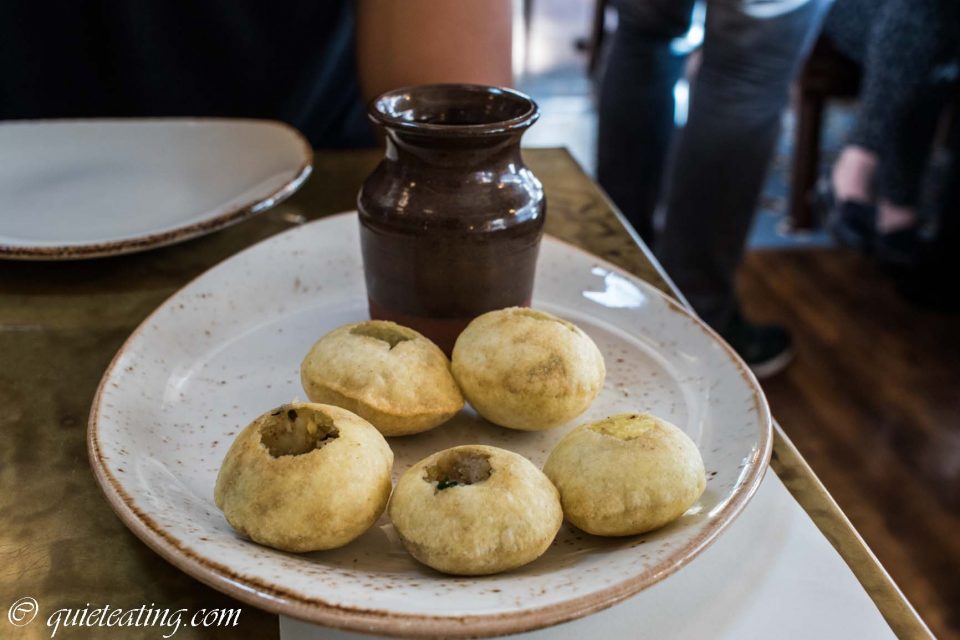 Puchkas, wheat and semolina shells filled with spiced black chickpeas, potatoes and tamarind water.  I would use the word authentic but (a) I think it is a much abused word – it seems that everything is authentic nowadays.  Better than fake I guess and (b) I have no idea what these should be as it was my first try.  They could easily be pulling the wool over my eyes as it could have been something dreamt up in a backroom.  Yet, whatever the providence of their creation, these were meaty, light, excellent and a fun little treat – we were warned to pour the tamarind water into the puchkas and then quickly stuff them into our mouths.  If you were a bit tardy, you would experience a collapse of structure integrity, similar to some banks in 2008.  Best not to be repeated. 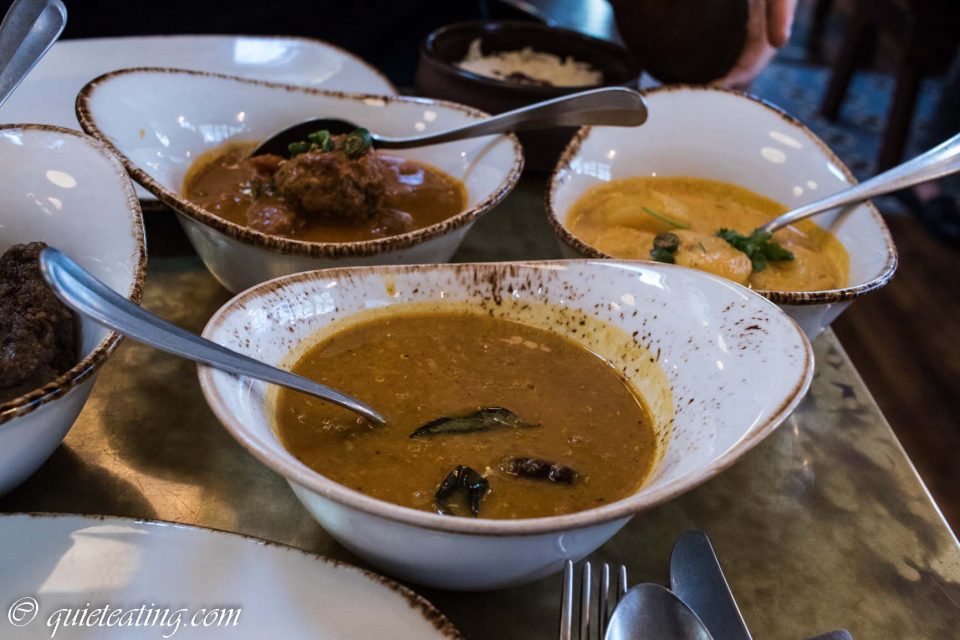 Bottom left, hyderabadi tamarind dal, tangy lentils tempered with dried red chilies and curry leaves.  With the starter done, we wasted no time diving into the mains.  First was a rather safe choice, bean curry.  This was nicely smooth and with a light taste of beans.  It brought me back to days of hiking in Nepal when I had dal baht for a record 20+ days in a row.  The reason was not that I lost my culinary sensibilities at that altitude (we were on our way to 5400 metres), lost my sense of smell at such extreme heights but rather for a more mundane reason.  It is rather more difficult to get meat to outposts at high elevations without a road.  Instead, carried by human feet, you never knew how long the meat had been petrifying before it found its way to your dish.  Yet, that is perhaps not a story to dwell on as we were maybe about 15 metres above sea level, not 1500. 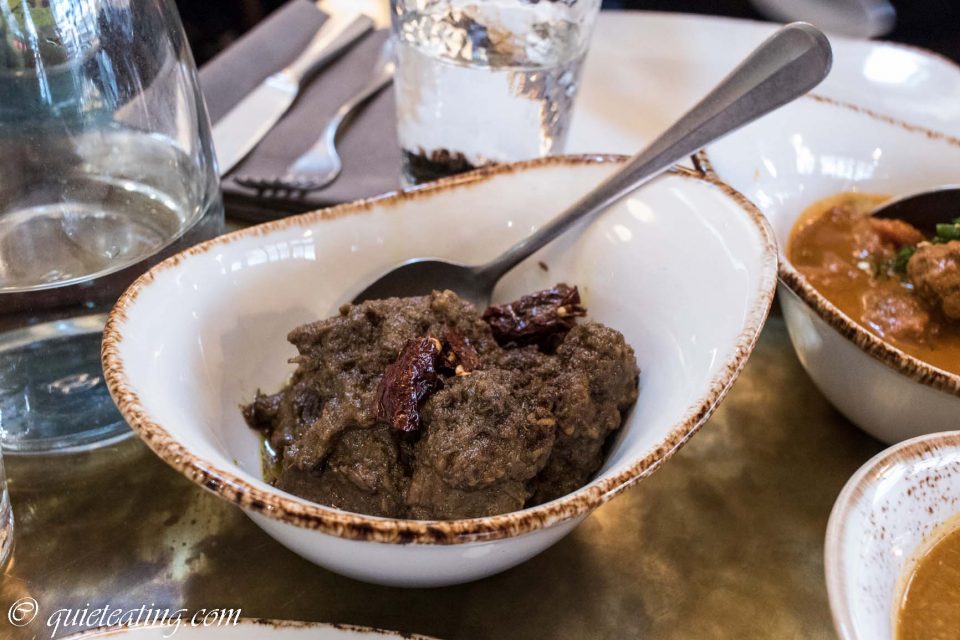 Mutton curry, mutton with chilli.  We were told that these would be soon discontinued from the menu.  So we rushed to try them before they were gone.  I can now see why… Rather dry, tough and timid, this was probably my least favourite dish of the day. 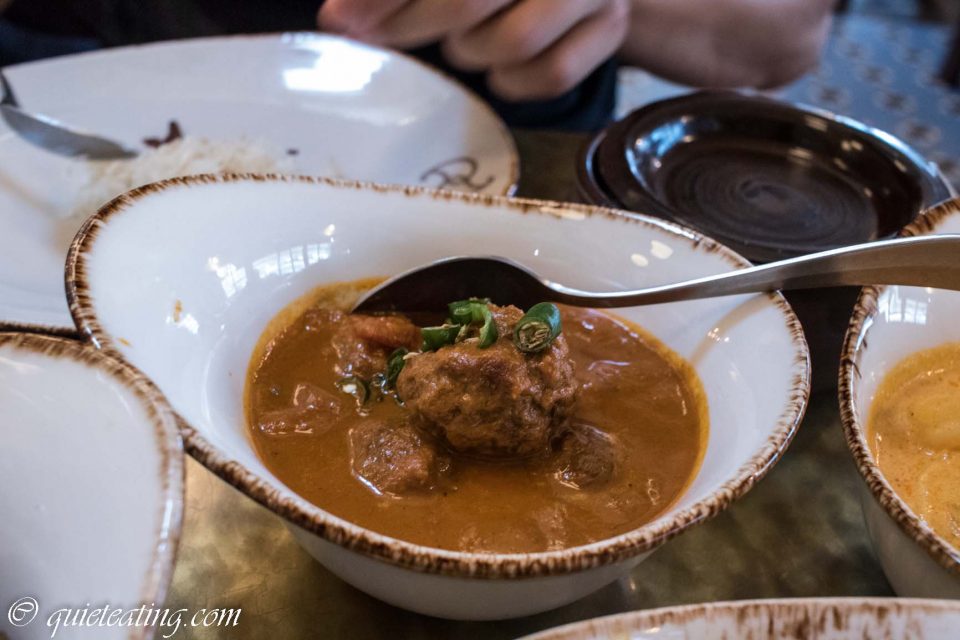 Venison kofta, vension meat balls cooked with shikar masala (hunting spices) and served with creamy tomato and green chili gravy.  I was rather curious with this menu item labelled, as you do, as shikar masla (hunting spices).  I wonder if I should characterize (label) my posts as poor (might lead to food poisoning), average (might as well go to KFC) or excellent (look for something of yours to pawn off to go).  Perhaps that might assist (help) with an increase (more) in traffic to my site.  Although in this case, I think the venison kofta can safely be done away with. 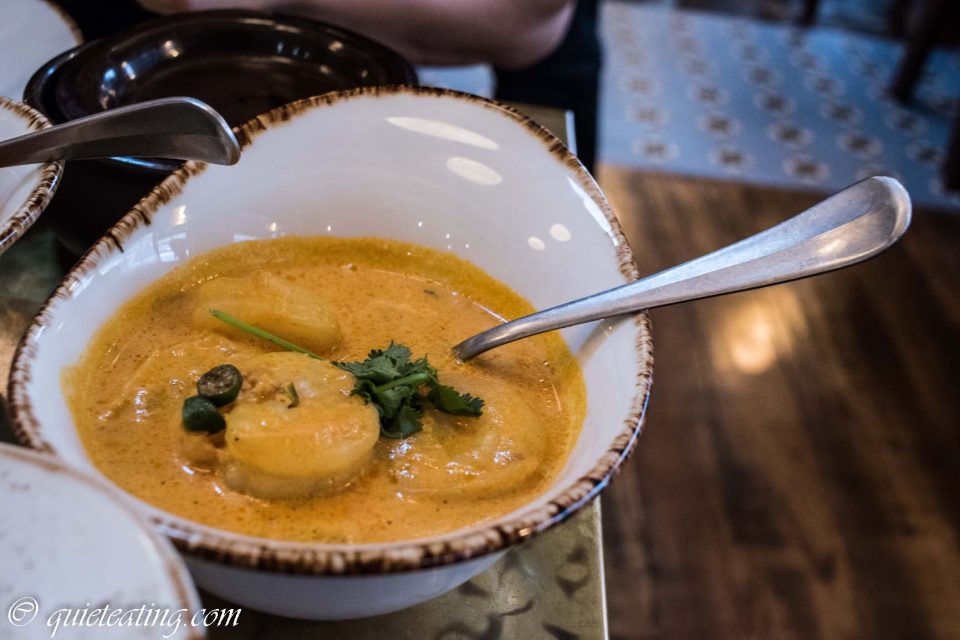 Prawn malaikari, Bengali specialty of delicately spiced tiger prawns cooked in coconut milk.  At first bite I was astounded (lost for words).  This dish in itself made the entire journey worthwhile as it was frankly outstanding (good).  Mild creamy sauce with a hint of fire from the chilies served to highlight the bounciness and suppleness of the prawns.  I have to say probably some of the best prawns I have ever eaten in London.  They tasted as if they were only swimming minutes ago. 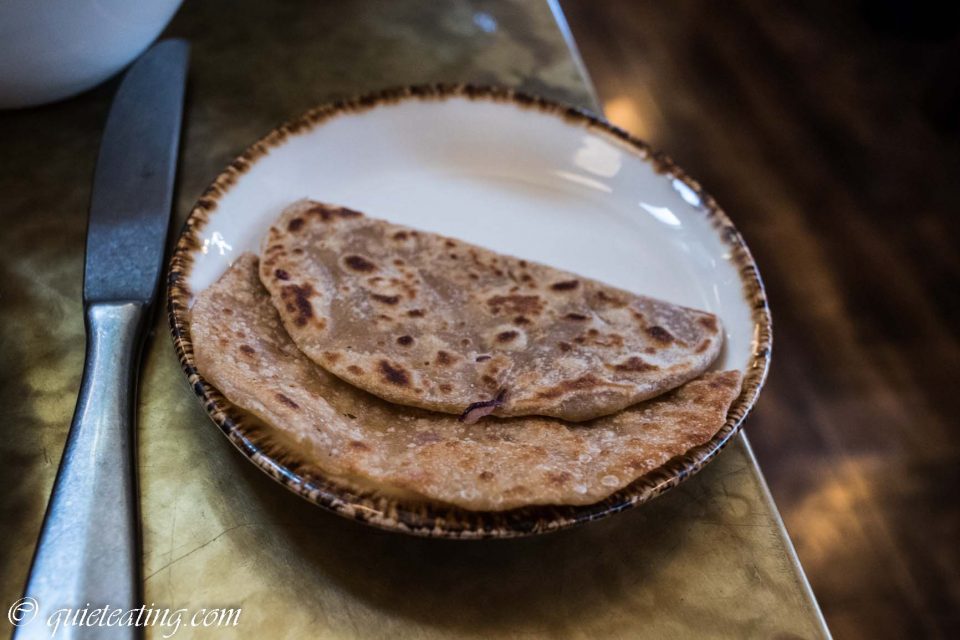 Bulandshar rogni roti, wholemeal bread cooked on a tawa, with red onion and chilies.  With an earthy taste, these were not really for me.  Wholemeal just seems a bit contradictory when eating curry, it’s like having wholemeal french toast.  If you are already dipping into sin, you might as well go the whole way.  Curry isn’t for those on a diet.

Although I had started the meal with high expectations (hope), as usual such dreams were were soon to be proved mistaken (sad face).  The prawns were maybe a hint of what it might have been like in its stupendous pop-up days.  It seems in their transition to a more permanent establishment, they lost something.  Could have been so much more.  Would have, could have, should have.  I left with unrequited dreams (unfulfilled hopes). Perhaps next time?