That was a particularly loquacious waiter.

As we sat down at Parlour, being a bit early, we were one of the first ones in.  Which meant that we had the restaurant to ourselves and this particularly verbose server, perhaps eager to see the first the customer (although people aren’t usually happy to see me, I guess boredom manifests in many different ways) came hastily towards us.  After exchanging extended pleasantries with us, when it came to selection of the food, with particular enthusiasm he convinced us to partake of the tasting menu, with its mysteriously alluring Dandy’s cow pie.  Something not to miss (and talked about later).  Duly swallowing the bait, hook, line and sinker (or perhaps just hoping to get rid of him), we decided to go for the whole hog, or perhaps in this case, better to say the entire cow. 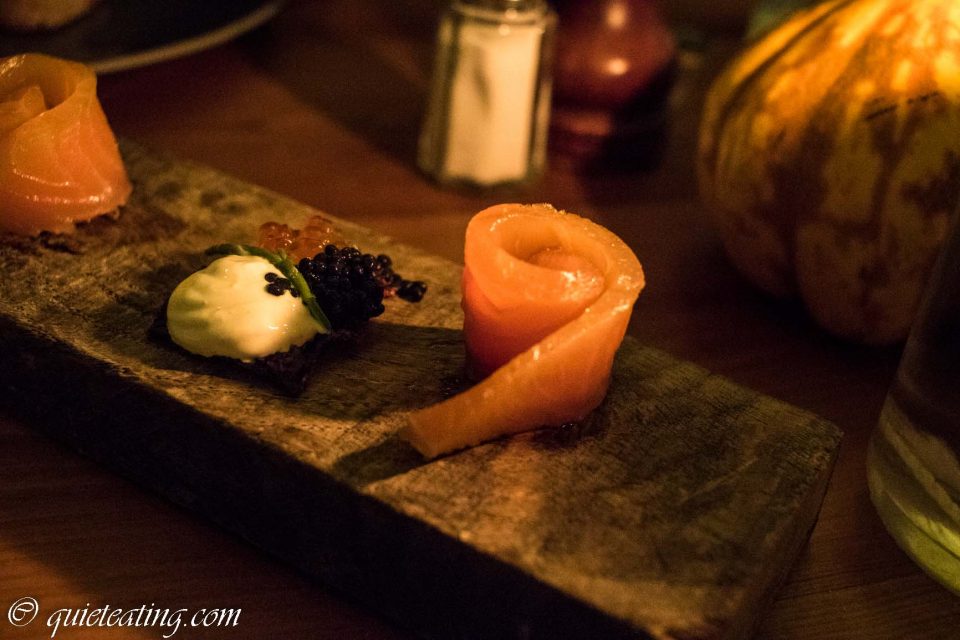 ‘Back Door’ Smoked Salmon on a Plank, Crispy Skin & Salmon Caviar.  A thick juicy cut of salmon, something that is rare in smoked salmon.  I always hated how thinly they were sliced and salmon skin with eggs.  A great appetiser. 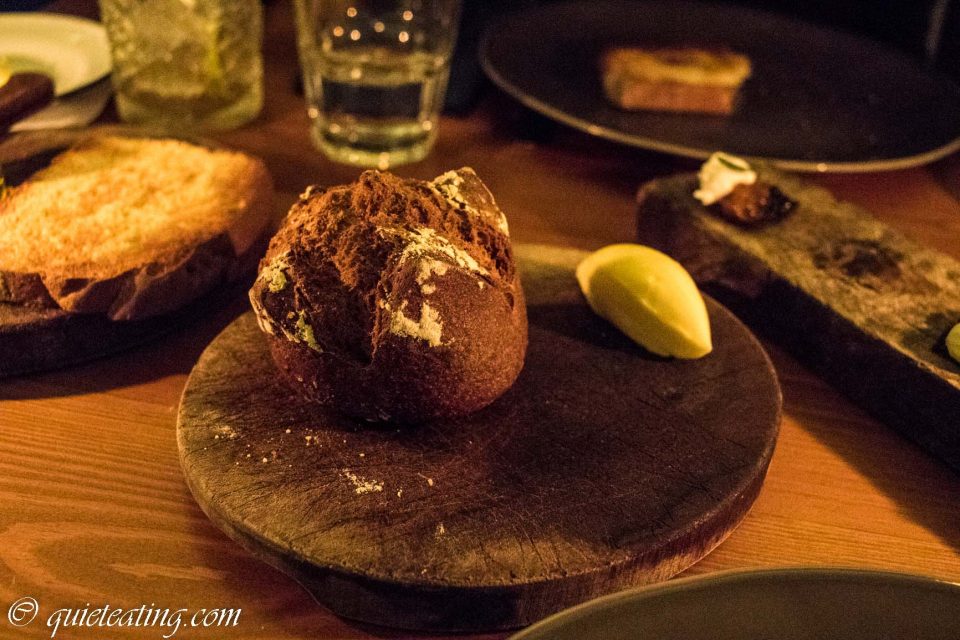 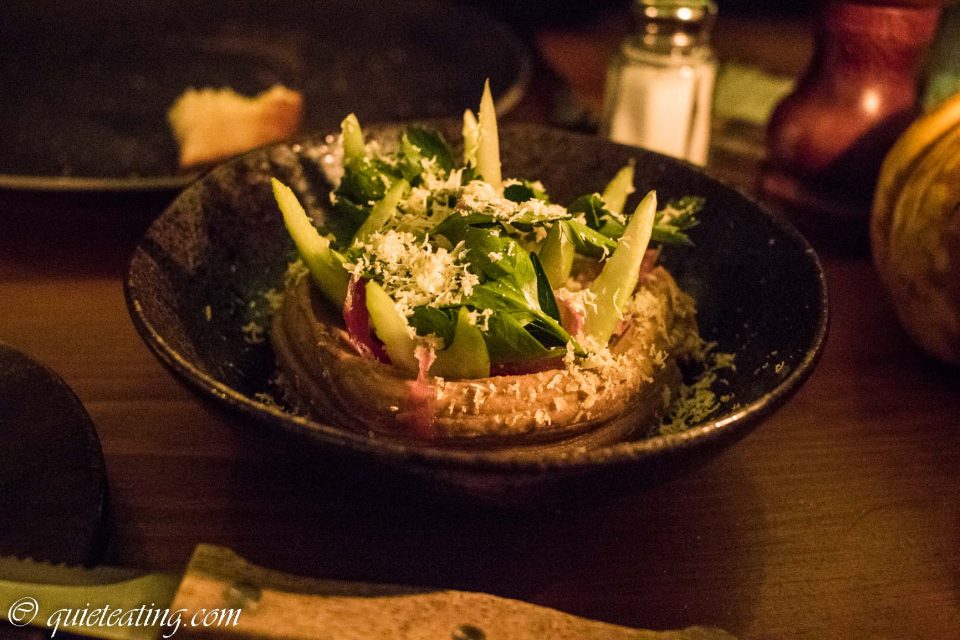 Chestnut Hummus.  Yet it was here when we were to see excellence shine through.  Smooth hummus with earthy chestnut flavours, this was quickly polished off with the pita bread. 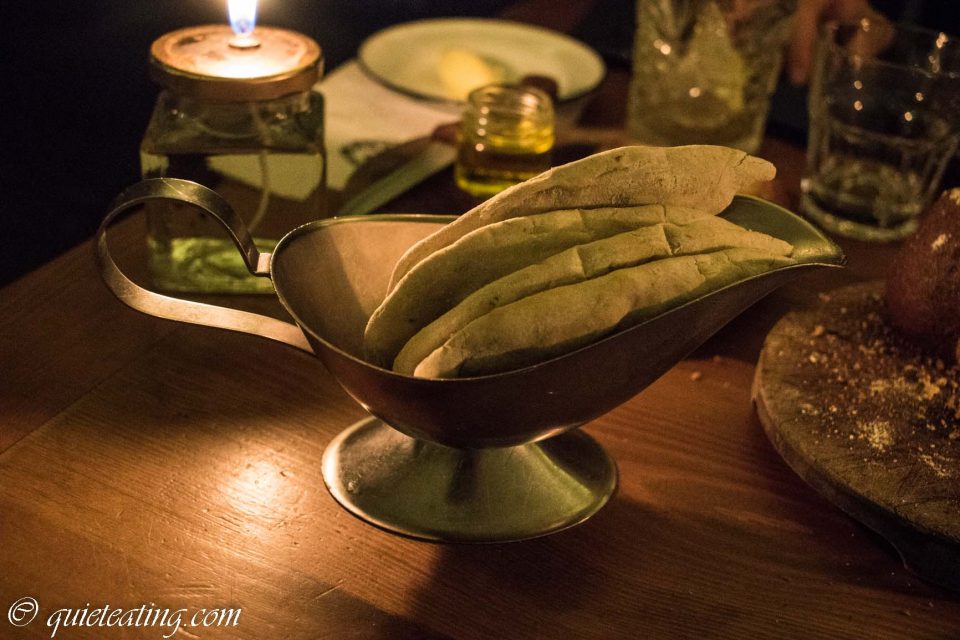 Rosemary Pitta Bread.  With a hint of rosemary, they did not detract but only complemented the hummus, highlighting the nutty smooth flavour. 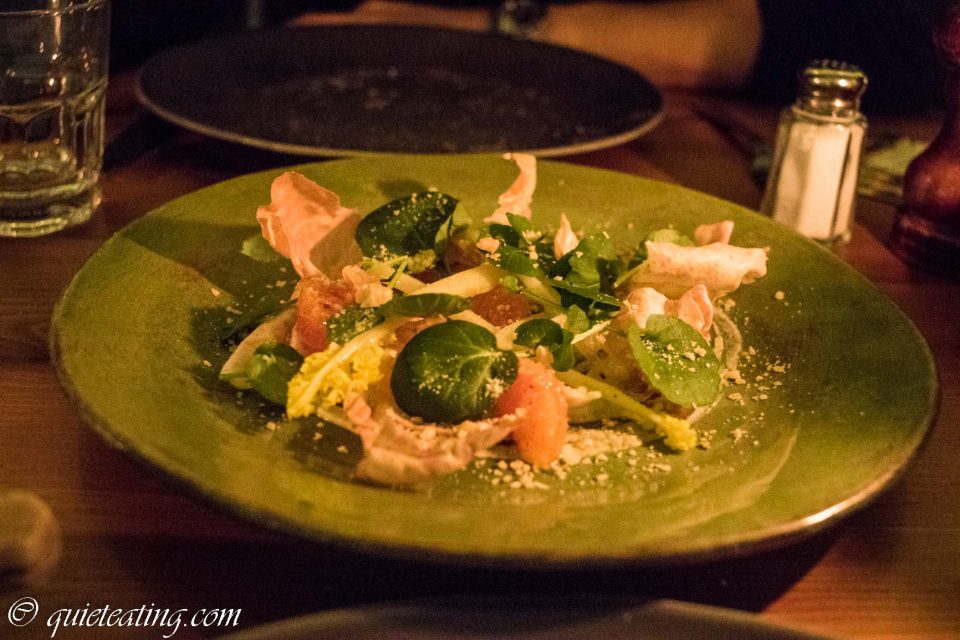 Sea Kale, Lettuce, Blood Orange & Almond Salad.  Sadly, the next course was something rather boring.  Although there were attempts to do this in a less standard way, such efforts were wasted on me.  Due to my peculiarities, I am rather less than charitable to fresh vegetable dishes these days.  On account of what I’m eating at home encouraged by my better half.  Others might have found this better than I. 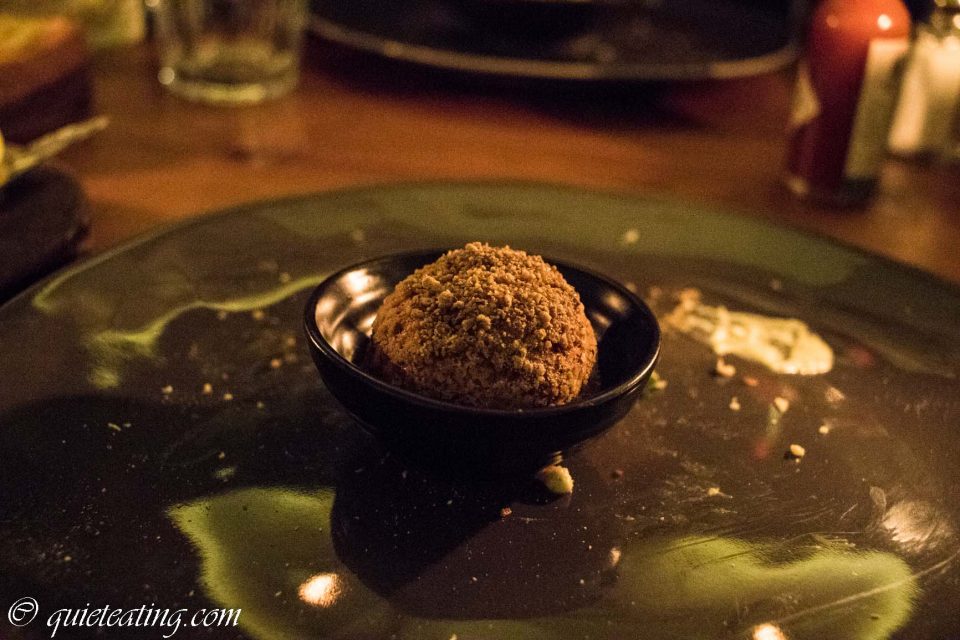 Duck Liver Profiteroles with Honey & Almonds.  Something rather kooky.  I like liver (hello foie gras) as much as the next person but this was a bit weird.  It just tasted a bit too cloying and heavy. 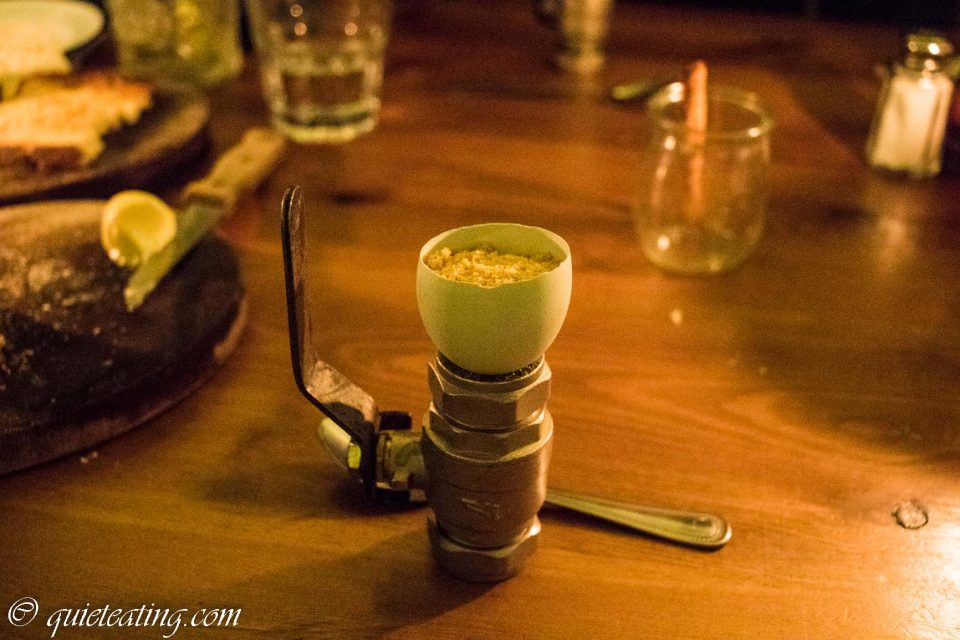 Blue Cheese Custard.  As our waiter helpfully described.  This was Blue Cheese Custard.  Which is literally (how I hate that word), Blue Cheese and Custard.  Surprise! Although the taste was ok, the display had a negative effect.  Putting this on a gas faucet, although no doubt trying to make it hip and trendy, made me think of industrial workrooms.  Not somewhere where I would expect to have a good meal, in which case, I guess it did match. 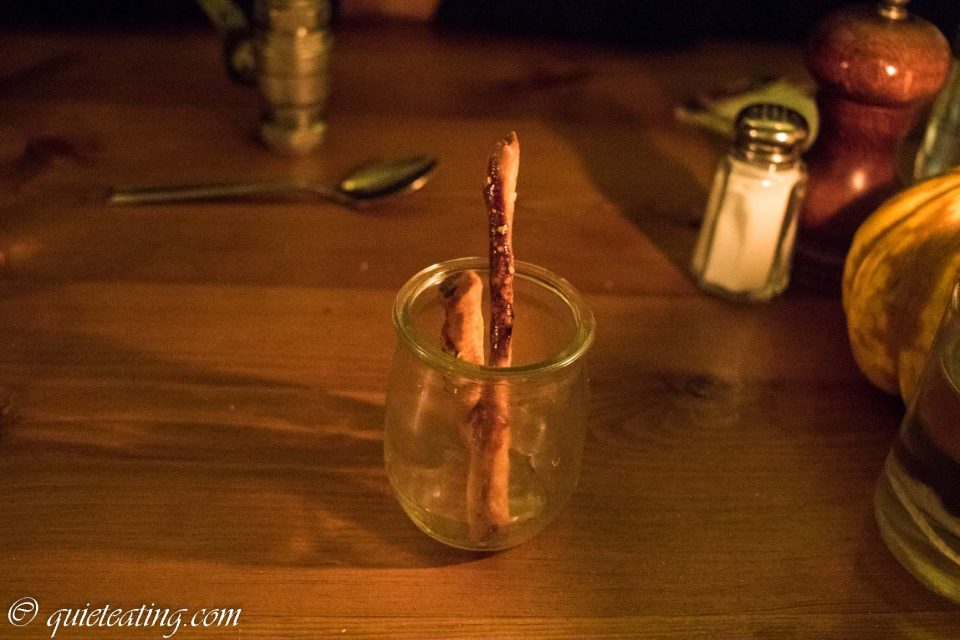 Marmite~less Twiglets.  To stir in your egg, these were nothing special. 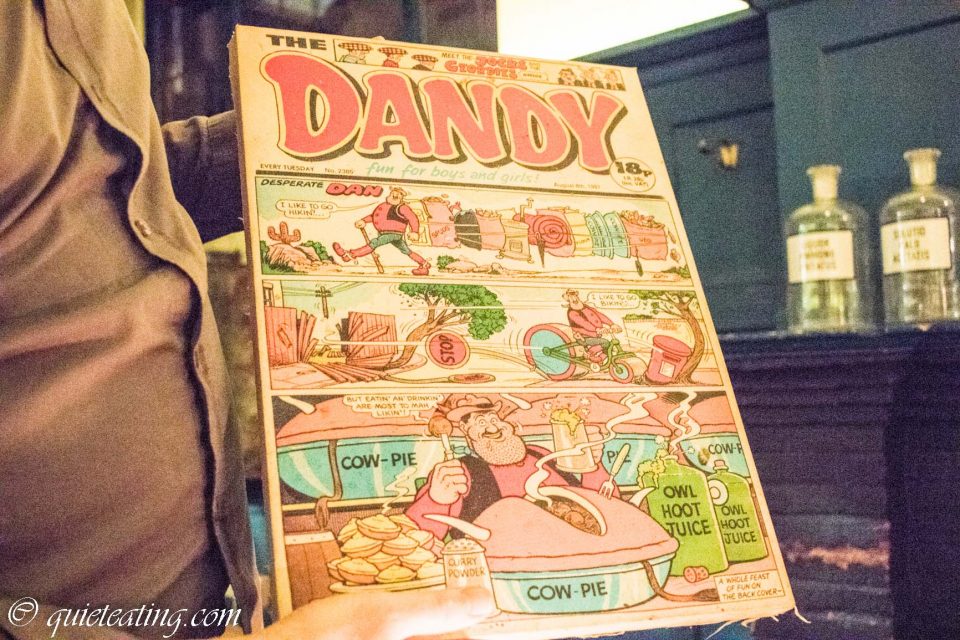 Dandy.  The star of the show.  Rolled out when his pie arrived, to describe how it is all done.   From the photos above, his pie must be something special.  If he is able to walk around with that length of backpack while staying upright.  He must have abs of steel.  No doubt due to his diet. 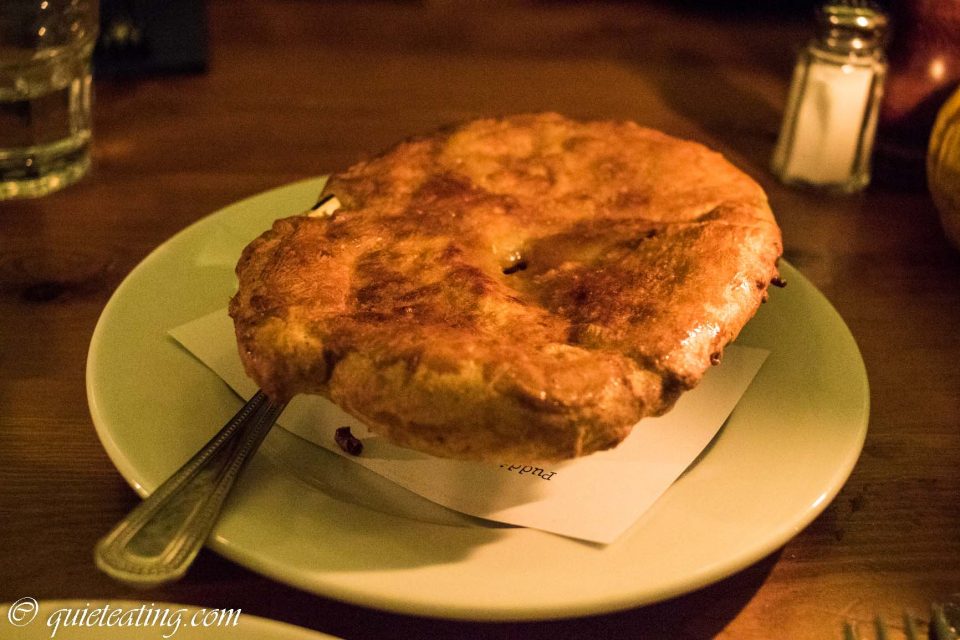 Dandy cow pie.  With suet topping (i.e. lard mixed with flour).  This was rather good, if not really living up the superlative hype of the advertisement above.  Crust was good, cow inside was alright (even if sadly some chunks of beef were a bit dry), gravy was ok. 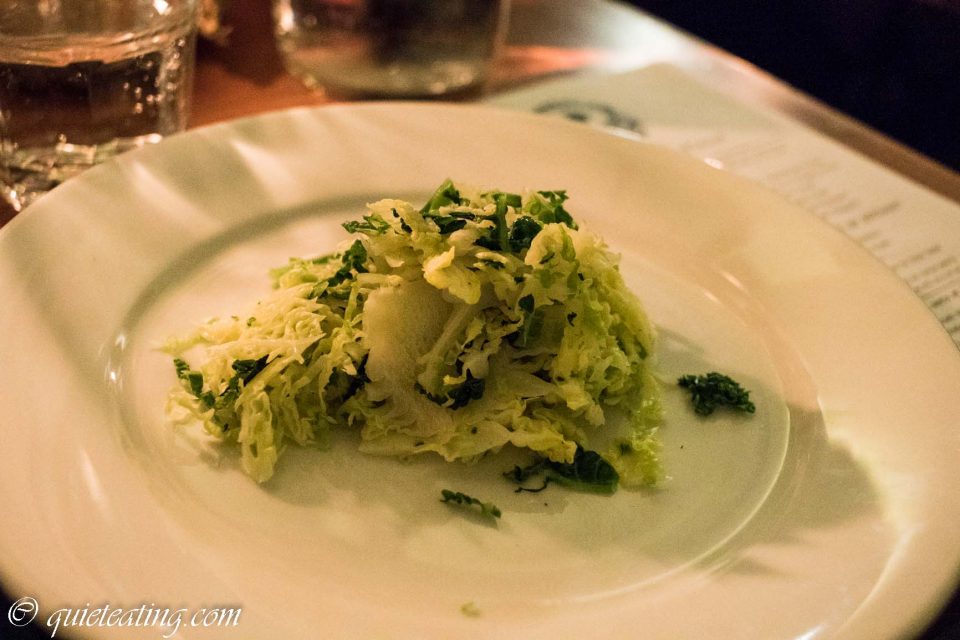 Cabbage.  Rather plain and quickly skipped over and forgotten. 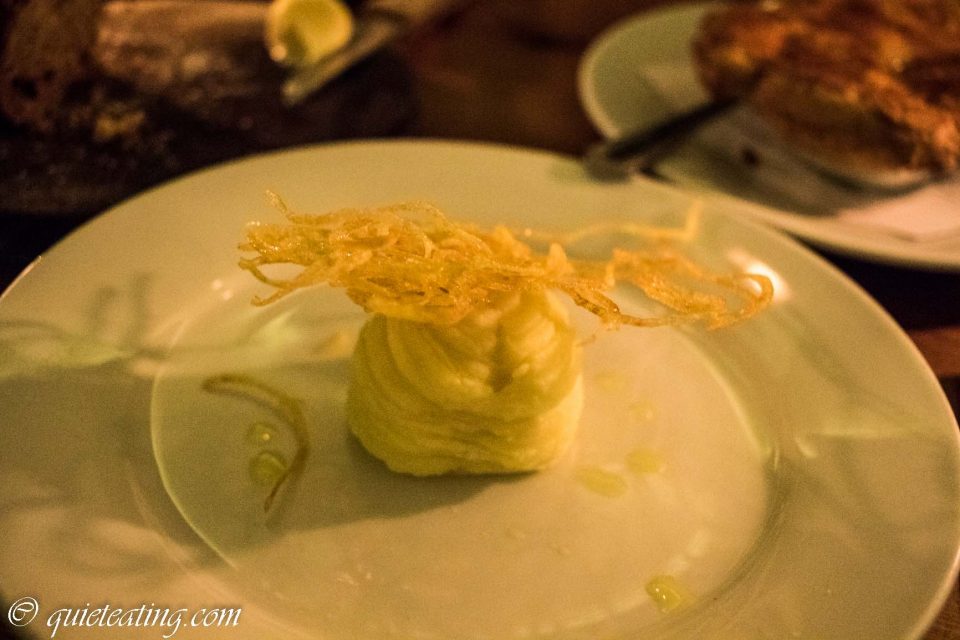 Potato, mashed and fried.  When I first spied this, I was reminded of a butterfly.  Potato two ways was rather good.  Often I have heard of meats served two, three or even four ways but to have the same applied to potato was great.  Typical accompaniment that this is to a pie, it was good, although maybe this was just in comparison to the cabbage… 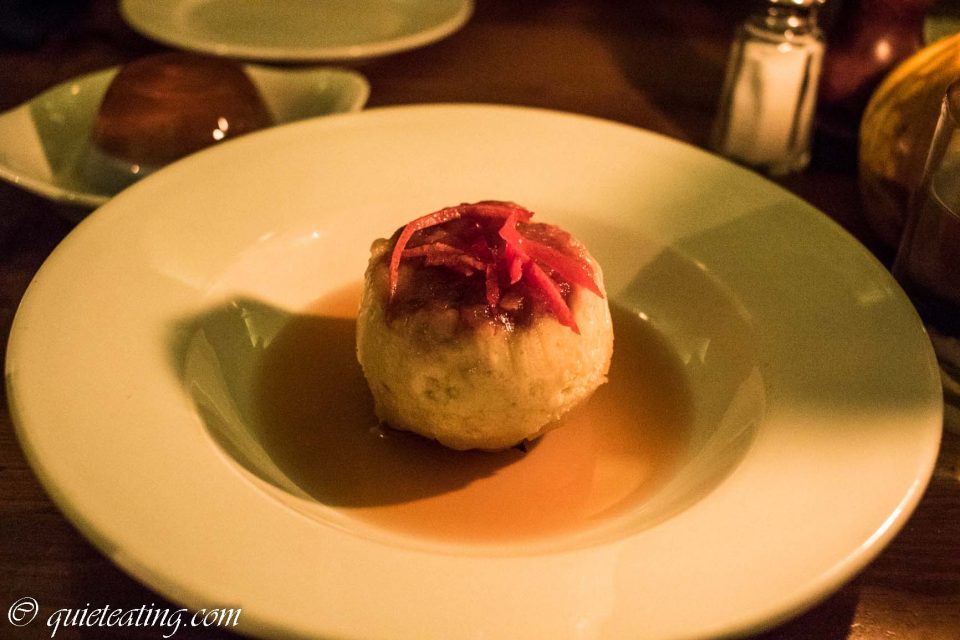 Tunnock’s teacake.  Interesting.  Seemed somewhat outback-like or perhaps it is just because it looked very similar to bread I had had in Australia.  Such Damper bread would have a home made and rather rough texture, on account of the lack of tools for preparing it.  Given the available tools at that time, it just wasn’t that refined.  The interesting addition of hot oat milk to pour on top of this didn’t really lift it up. 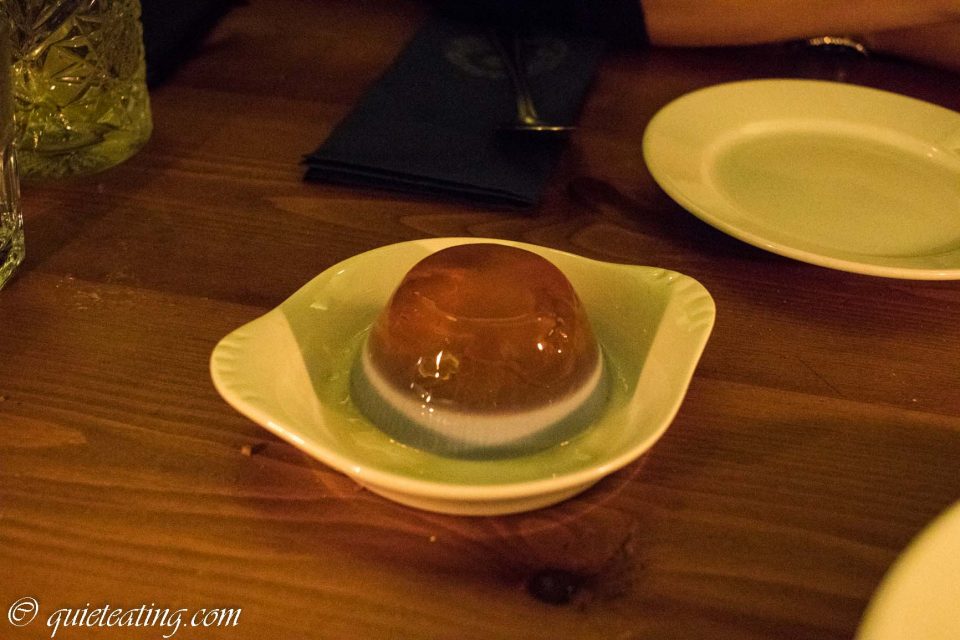 Jelly.  Of some kind.  I think.  Immensely forgettable. 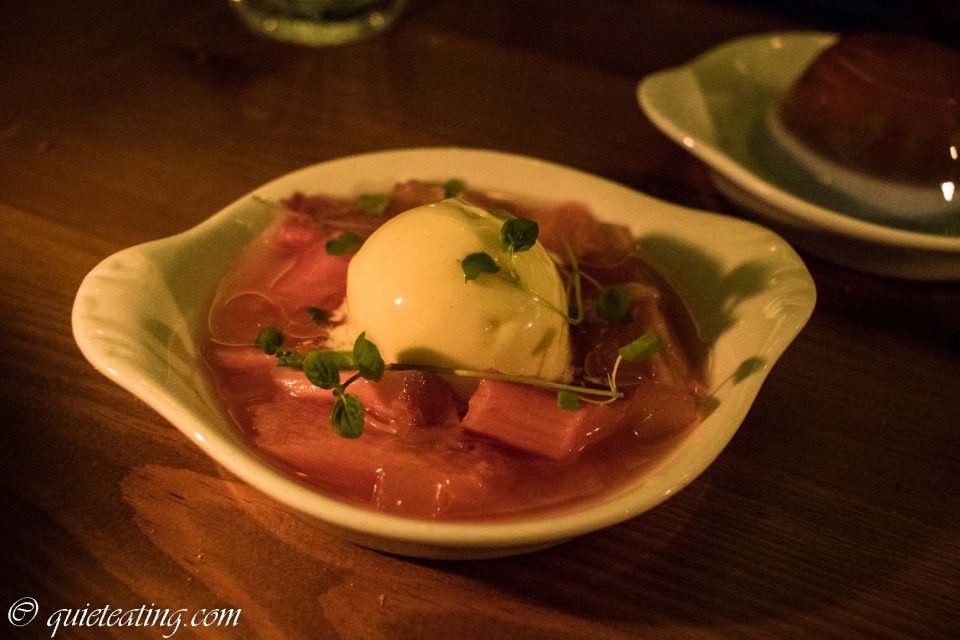 Vanilla ice cream with rhubarb.  A pretty presentation but a rather boring taste.

From the pictures of Dandy, he looks like a particularly affable man.  Someone that is willing to go to great lengths to find good food (and drink).  If he was real, I suspect that we would have been fast friends.  Persuaded as I was by the big words and shiny pictures of his pie and related exports, I’m glad that I can say that I’ve tried that and it was pretty good.  Unfortunately, however, the same cannot be said for all the other additions.  So Dandy is worth it, the rest not so much.  If I came back here, I would ask for a cow pie to go and the hummus of course.