I once knew a guy called Oren.

He was my tour guide in Israel.

He was a somewhat testy man but I forgave him as he gave colourful commentary of the sights and smells of the Holy Land.  Even if he was busy openly ripping us off on the side.

One of the many things that I didn’t appreciate was his perchance for taking us to not very good places to eat.  Instead, it seemed to be where ever his buddies had set up shop.  Sick and tired of being treated as a walking ATM machine, towards the end, I formented a rebellion and choose to go to somewhere else that he had not chosen.  Half the tour bus decided to follow me. As soon as it was clear that this was not an isolated uprising, his hurried scrambling to pick another avenue was particular entertaining to watch as he sought to salvage some of the situation.

Thankfully, at night he abandoned us to our own devices.  With lack of the rather aggressive shephard, I was able to try some rather excellent Israeli food.  So seeking to relive the better memories of our trip, we choose an Israeli establishment for a recent meal. 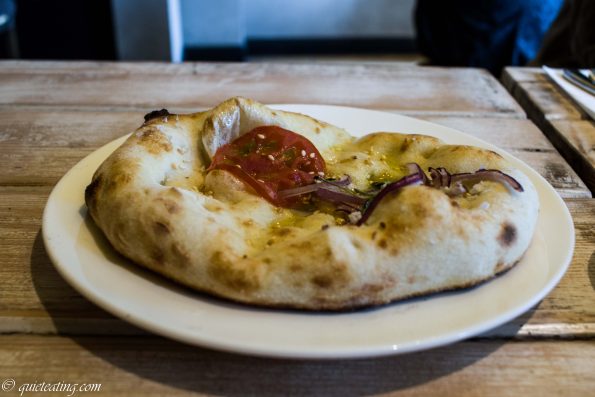 Stone baked flat bread, tomato, olive oil.  This bread was nicely bouncy, lightly flavoured and had just the right consistency to go with the pickled vegs, the tahini, peppers and hummus.  A good choice to start the meal. 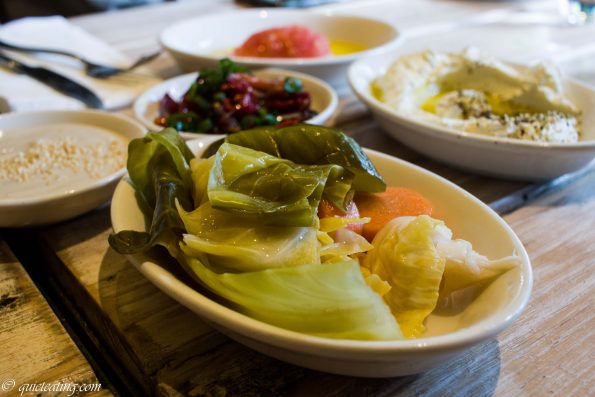 Pickled vegetables.  Crisp and tart, it provided a good contrast to the smoothness of the dips. 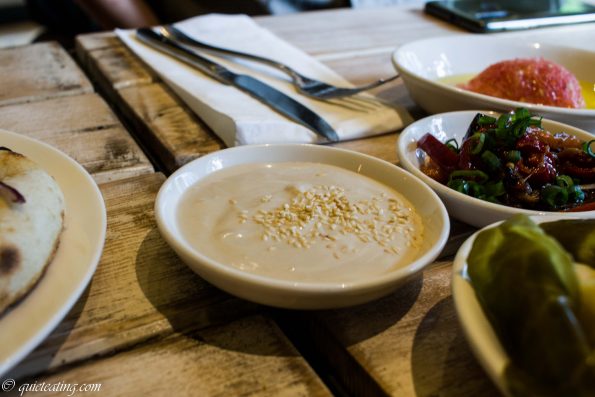 Tahini.  Creamy and nutty, a delight. 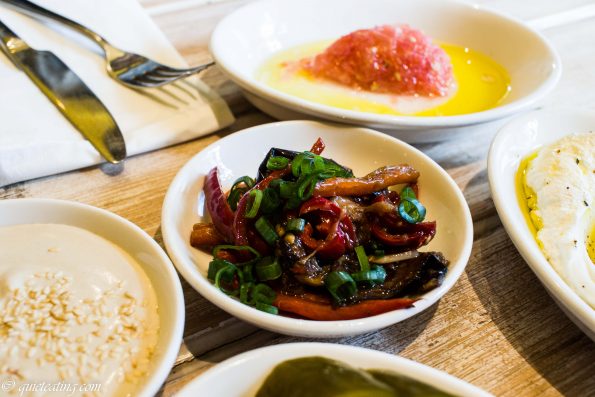 Grilled peppers.  Less stinging then the pickles, this was a milder contrast if needed. 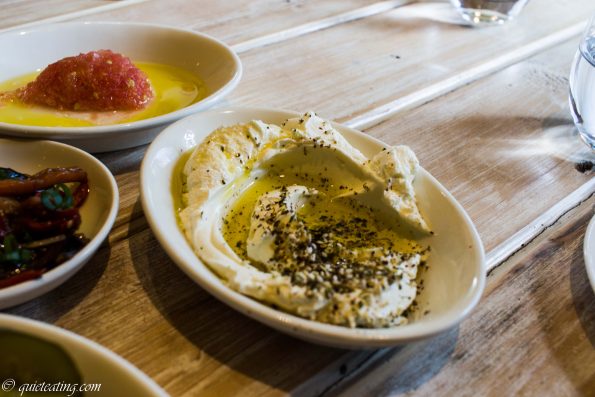 Hummus.  Heavily spiced and fulsome in taste, it was great. 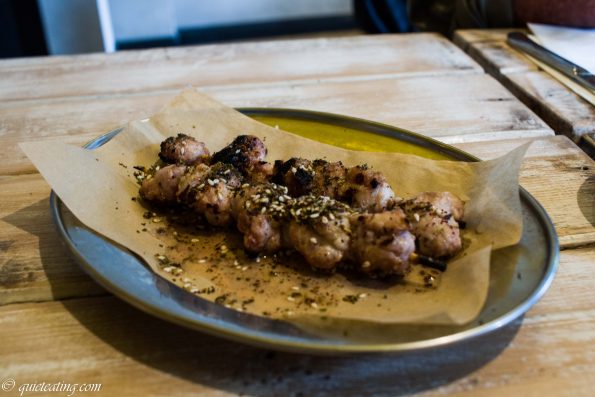 Grilled sweetbreads, za’atar, lemon.  Here is where things started to get interesting.  These rather moreish offal delights were delights.  Lightly grilled with cumin and finished with citrus, the strong innards were dulled down to be something rather pleasant. 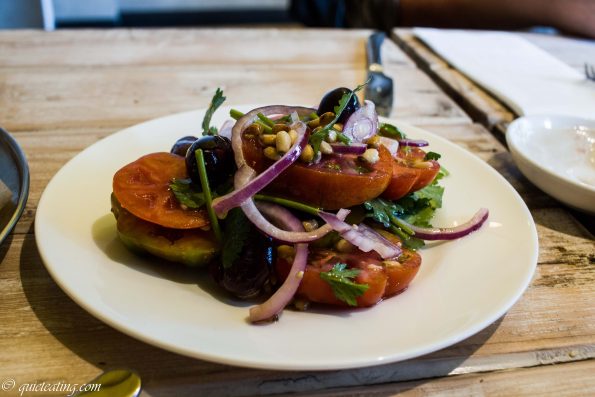 Marinda tomatoes, kalamata, pine nuts.  In a more ordinary dish, the salad tried to be great but the tomatoes were sadly not up to scratch.  They were instead rather sapid. 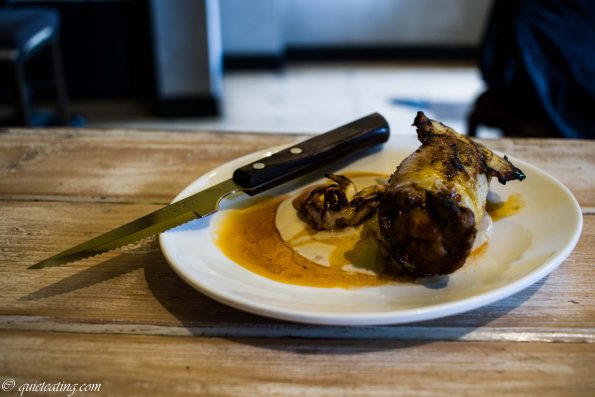 Squid, spiced lamb sausage, tahini.  An interesting dish with the somewhat plain squid being bolstered by heavily spiced lamb mince.  A tasty mixed dish, if spoilt somewhat by over zealous use of salt. 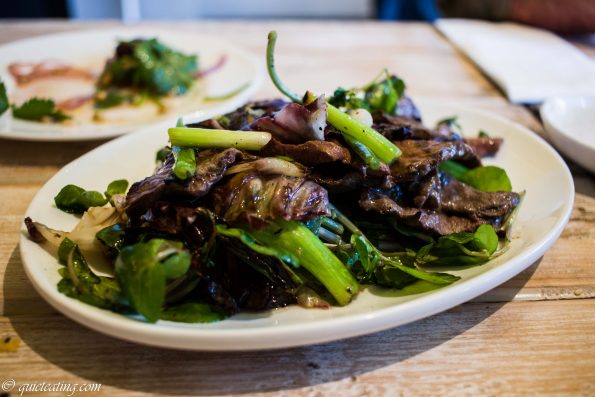 Grilled ox heart, watercress, radicchio.  This dish reminded me of oriental stir fried beef strips, except the beef was a bit chewier.  Tasty in any case, with heavy flavour balancing wish more placid leaves.  Although it was rather salty. 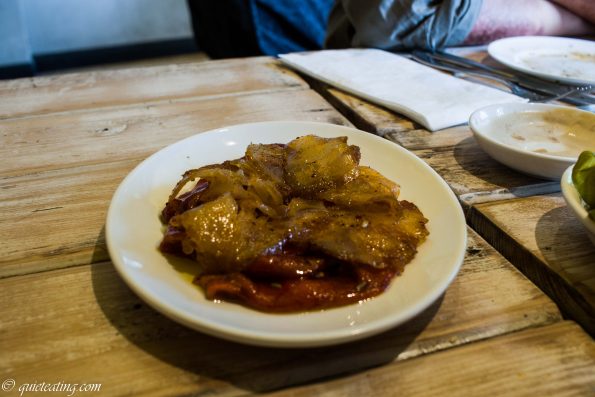 Pollock pastrami, burnt romano peppers.  An unusual dish, I had never heard of pollock pastrami before.  Served in flat broad sheets on top of peppers, it reminded me of bacon strips served on tomatoes.  What it made up in uniqueness, it sadly did not balance in taste.  A bit over-enthusiastically seasoned too. 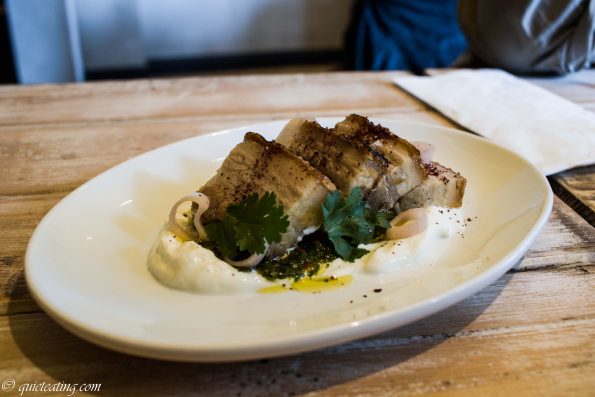 Pork belly, yoghurt, zhoug.  A bit of fat to make the meal go down.  Although maybe something a little less adventurous, it was nonetheless a good way to end.  It also avoided the strong taste of the sea, something that is not really welcome when I eat meat.

I got some curious looks from the waiter as I partook in my food.  He kept on having to top up the water jug.  Judicial use of salt can really highlight flavours.  Going a bit far can block out what you are trying to show.  Excessive amounts can lead to kidney stones, something which I hear is a far from a pleasant experience.  So maybe I can’t blame my friend Oren too much.  Maybe he just had too much salt in his food.  That might have explained a lot.

Lunch (2 courses per person) was GBP25 excluding drinks and service.