I don’t usually like to attend clubs.  Bistrotheque makes me think of the discotheque.  A place that I was never cool enough to enter.  As my friends can tell you, I’m not the grooviest guy around.  This usually means that I am made to wait outside in the cold and rain while those in more spiffy clothing (and more attractive features), jump the line.

Upon entering, this was an interesting mix of atmosphere, furnishing and food. 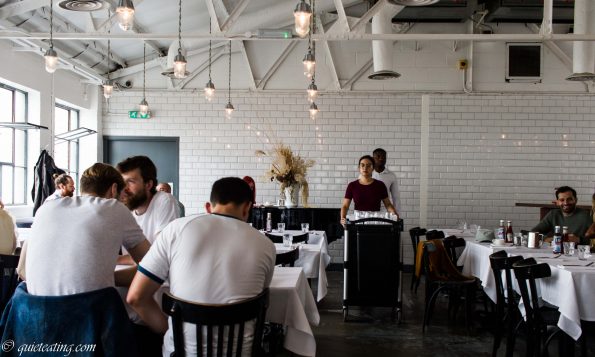 There was live piano music in the corner.

There were white tablecloths on the table.

Interesting menu items were on offer.

An industrial look with exposed metal beams, white kitchen tiling and exposed lightbulbs was on display.  They did enough to make it not feel like a toilet though (like a coffee place I have been), so I am thankful. 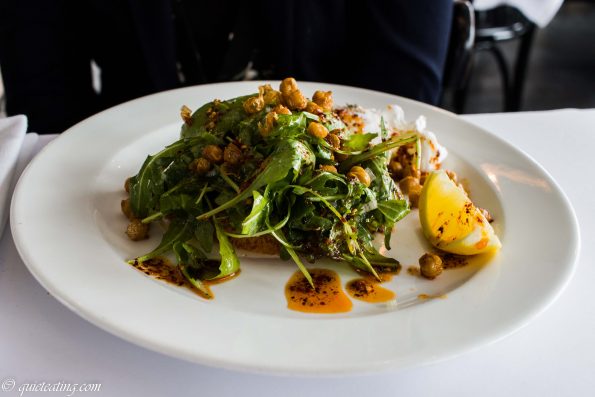 Farinata, avocado, chilli, crispy chickpeas, vegan aioli.  A farinata is a fusion of a pancake and a tortilla.  Aioli is a garlic and oil mixture.  A chickpea and an avocado is a chickpea and avocado.  The slight spice of the chilli, the smooth nicely ripe avocado and the remarkably crunchy chick peas led to a rather good dish.  It tasted remarkably fulsome for vegetables. 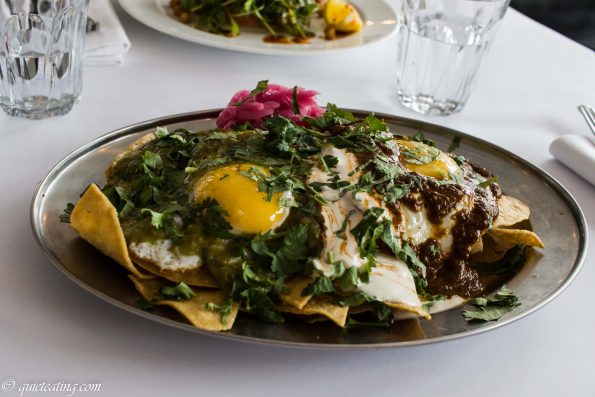 Totopos, red salsa, green salsa, sour cream, lime pickled red onions, coriander, fried eggs.  A new dish on the menu, this was interesting.  Totopos essentially is tortilla chips.  It was a bit of a strange dish with the crunchiness of the chips contrasting with a slightly too tart taste of the sour cream.  I wouldn’t go as far as to say that this dish was a lemon but it wasn’t really for me. 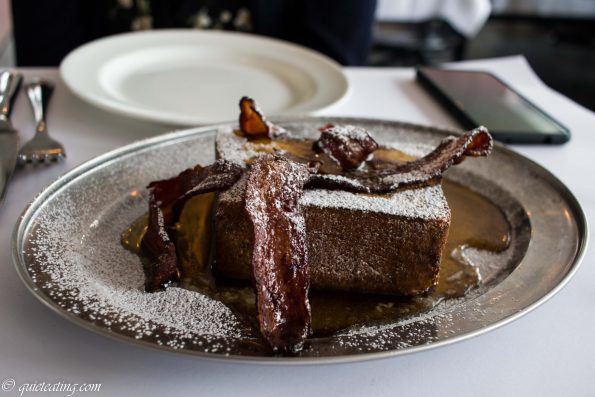 French toast with bacon, maple syrup.  The French toast was carefully seared on the outside.  The bacon crisp and less fatty than expected.  With the maple syrup it was alright, if not as adventurous as the other two dishes.

Service was crisp and professional and they did something that I have failed to see for a long long time.  They actually had a conversation with me. I’m used to be ignored in most restaurants, even when I try to make a scene.  With special thanks to our waitress, as she sought our in-depth feedback on the new totopos dish, my dining companion very diplomatically said “it was nice”.  I, in my usually less than tactful way, said that it was a bit of a lemon.  I caveated that that is just me.

When the bill appeared a few minutes later, this waitress said that the offending dish had been removed from the bill.  !!!  I guess my big camera intimidated her.  Either that, or unlike most discotheques I have been to, they have good customer service.