Having left Wing Wing with my hopes fluttering off into the ether, my dining companion and I thought that it might be prudent to try somewhere else.  The hope would be that this new experience would expunge our memories of Wanting Wanting, sorry, Wing Wing, from our minds.  So in our frantic search for something to banish the sour taste from our minds, we thought that it would be best to go try exactly the same thing somewhere else.  The hope was that we could find better KFC (Korean fried chicken) on this happy sunny day to offset our previous trauma.

So we ended up in this interestingly named restaurant, On the Dak.  Although, it wasn’t hard to improve on Winge Winge, sorry, Wing Wing. 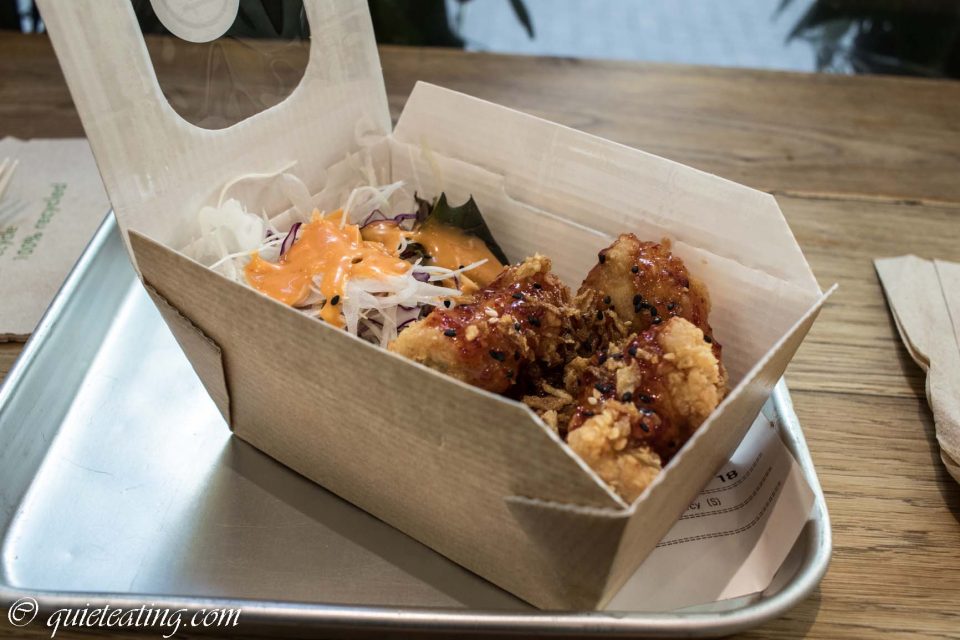 Seoul spicy. Although it was billed with exactly the same description as Wing Wing, this was something different.  It resurrected my faith that chicken could actually taste good, something that had been put in doubt just half an hour before.  Boneless chicken pieces, crispy and succulent and tender, these were a delight.  It was like eating chicken thighs without the messiness of the bone.  Instead, it seemed like all the annoyances of chicken were removed, leaving only the good stuff.

What an exciting day!  It has been a while since I had one of those.  So experiencing the depth and comparative heights of fried chicken, I could say that life sometimes compresses in that most delightful of ways.  Showing you what is good and otherwise, all in a rather crammed period of time.  So what did I learn today?  Well, reminiscing about the recent past, at least the good followed the bad.  If it was the other way round, the sun would have shone a bit less brightly (a particular concern in dreary London).  I also learnt a bit more about what KFC is supposed to be.  Something that could linger pleasantly on the tongue.  My faith in KFC is restored.  That’s Korean Fried Chicken if you were wondering.