Humour is a dangerous thing.  You may think (as I do sometimes) that you are the funniest man alive.  However, others may think that you are instead just rather awkward.  So, such a theory is slightly dangerous to put into practice as although laughter is sometimes elicited at your antics (or lack thereof), it might be at your jokes.  Or at you.  Although in an encouragement for people to try, even if things do not turn out as planned, failure is not generally seen as a crippling defect.  Instead it might be seen as a personality quirk that makes you, you.

Yet when it is applied to business, humour can be the difference between a riotous full house and a more glacial reception.  In any case, this is my usual long-winded way of saying that I didn’t find Wing Wing worth a laugh, well not in a complimentary way.  I had been lured by strenuous implications that this was the best fried chicken in London.  With such thoughts in mind, although I was greeted by the sign below  when I arrived, I still stepped in the door. 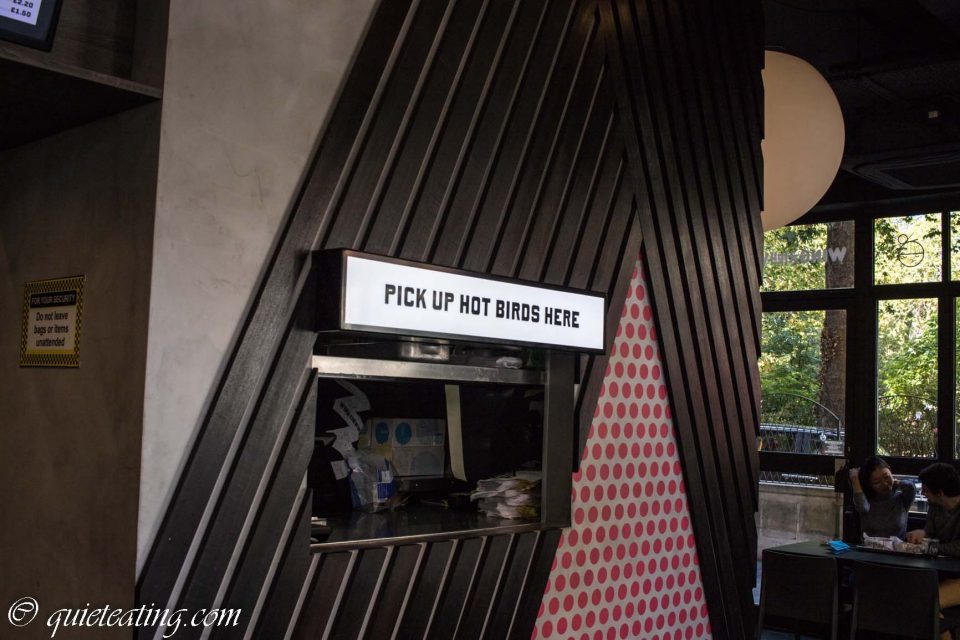 Double meanings being as they are, I dashed in.  Hot birds, here I come.

That is, if I could lift my feet to make it in.  The problem was, that in common with other oily places I have known, I found myself gaining more than expected traction on the floor.  What was worse, was that the further I stepped inside, like the fly on the spider’s web, the stickier things got.

In any case, having fought against the floor to make it to the counter, I placed my request, exchanged monetary compensation, then tried to find a free seat without ending up on the floor. 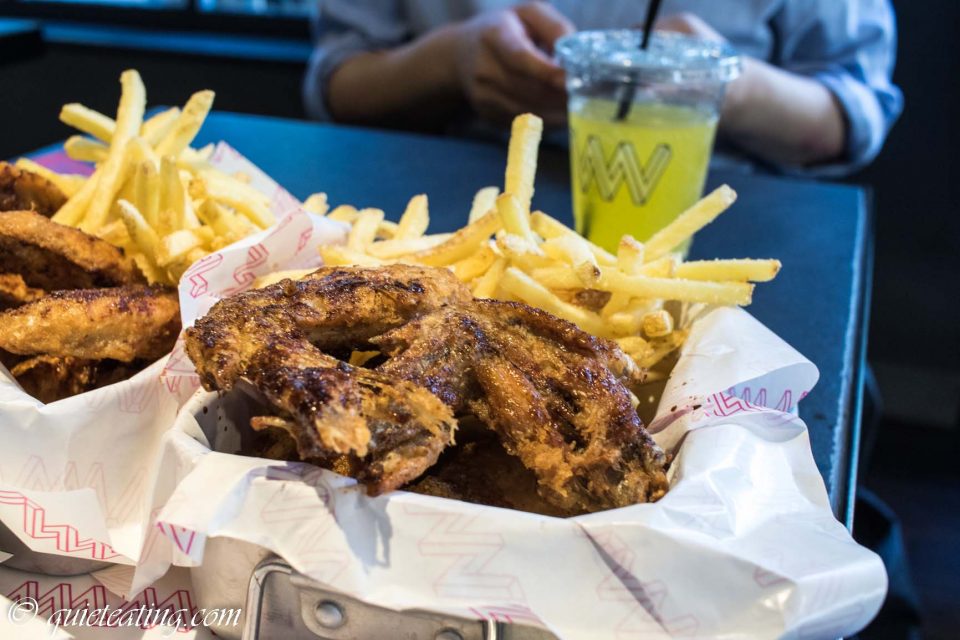 Soy garlic wings.  These tasted like, deep fried wings.  I couldn’t really tell the difference between this and the other flavour we ordered. 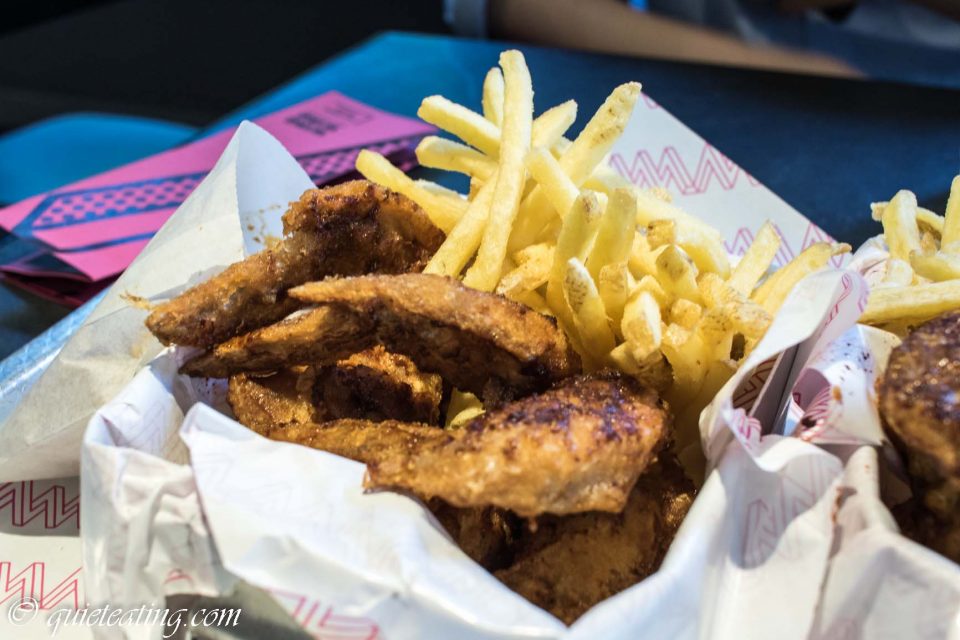 Seoul spicy wings.  These didn’t really seem to have any real extra heat as compared to what had come before.  The taste of both was sadly utterly average.  As my dining companion, a self-confessed lover of fried chicken remarked, this was KFC (Korean Fried Chicken) at double the price of KFC (Kentucky Fried Chicken).  Sadly, the taste did not follow this multiplier.

It also failed on the quantity front as well.  The menu promised 6 wings.  I counted 3.  Apparently cutting wings into two means you double the number of servings you get.  Sounds somewhat similar to the UK budget.

Lest I be accused of overlooking the best part, here are my comments on the fries.  One was billed as skinny fries, the other seaweed fries.  They both tasted like something you could get out of McDonalds.  Their form and substance suggested that they had been extruded from a frozen bag, ready to be served up to diners expecting more.  Although, perhaps it was only me who expected this last part. 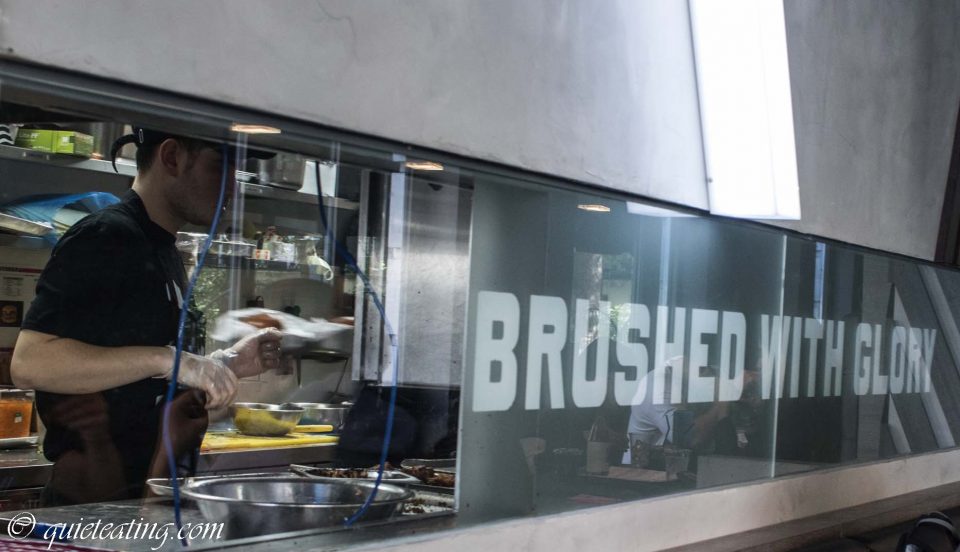 Humour is a dangerous thing.  It can boost your popularity or alternatively make you the laughing stock.  Think of people who insist that everything is great.  Very great.  Great great great.  Or perhaps others who say everything is perfect.  Sometimes, remarks that are so far from the truth can be amusing in an unintended way.

In this case, I guess I should thank them for providing a chance for much mirth.  Not during but after the event.  In particular, the above sign, given particular prominence was an ironic twist.  “Brushed with glory”.  Well, it was definitely brushed with something. Just not something I would describe so superlatively.  Should have gone to KFC.

Lunch (wings, fries and a drink) was GBP8.