How important is ambience to you?

Will you refuse to enter a dingy and poorly lit eatery?  Or instead will you insist that it looks like you can eat off the floor?  (I won’t make you prove that.)  Instead, perhaps, do you think that a little bit of dirt adds to the flavour?  Alternatively, are you afraid of catching something, especially when the toilets are somewhere you enter whilst holding your breath?

What about if your chair vibrated every 10 seconds?  Would that put you off?

The last part, that my seat seemed to shake rather severely every time someone walked by, played through my mind at Le Bab.  In perhaps a nod to their success, foot traffic was so high that it sadly became almost unbearable to me.  I did not enjoy the free roller coaster ride while waiting and eating my dinner.  Makes me worry that things might come to an unpleasant, sticky end.

However, here I will persevere and ignore petty annoyances to give people something interesting to read. 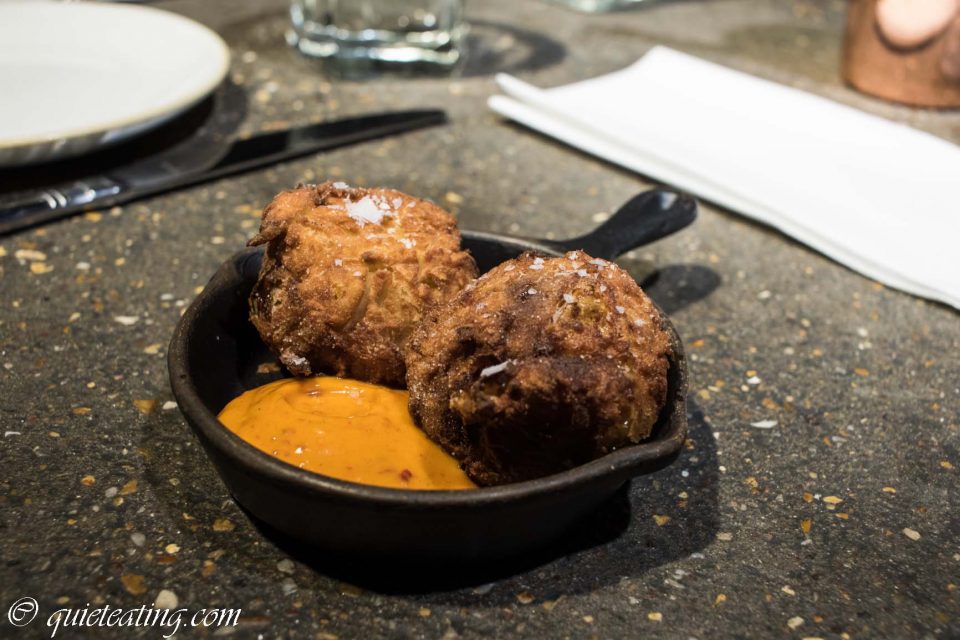 Le Bab Bhajis, braised lamb shoulder, beef shin and onion bhajis with smoked chilli mayo.  As our waiter promised us, this was the best dish on the menu.  As I replied, if it wasn’t, I would personally blame him.  Thankfully, unlike what most people promise these days, this was not overblown hyperbole.  Crispy exterior, succulent and meaty interior, delightful sauce, I could eat these all day but if I did, I would be twice the man I am.  Moving swiftly on. 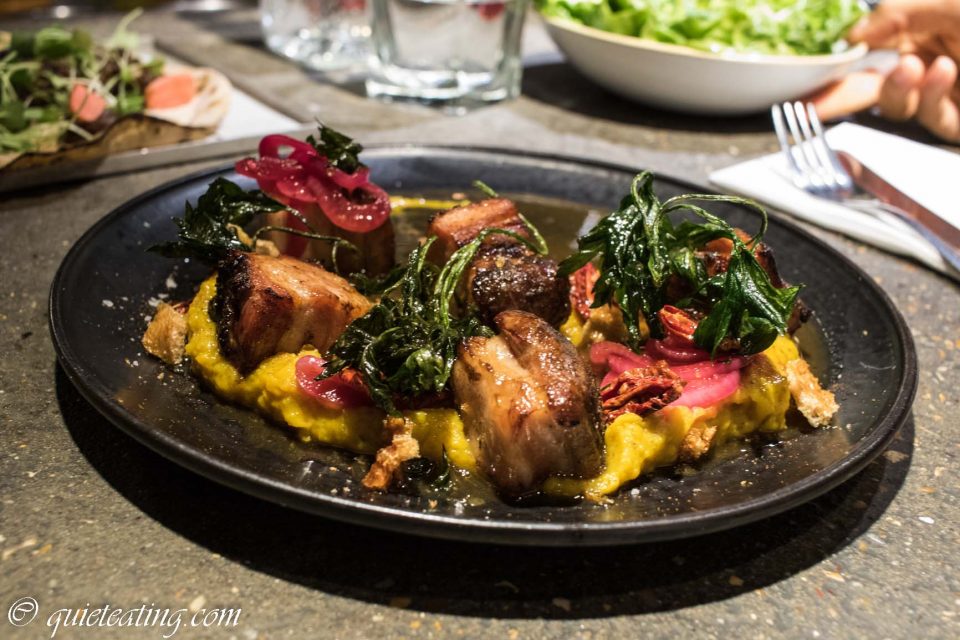 Pork belly shish, turmeric mash, beetroot onions, air dried tomatoes, crackling and gravy.  My first though, is what is an air dried tomato?  The corollary is whether other tomatoes which are not so described are dried by way of hair dryer?  Putting such unnecessary commentary aside, this was quite good.  The pork was moist (if it wasn’t I would be exceedingly worried) and delightfully charred but it was the turmeric mash which stole the show.  Buttery but with a hint of exotic spice, this was a great accompaniment to the pork, vegetables and even the air dried tomatoes. 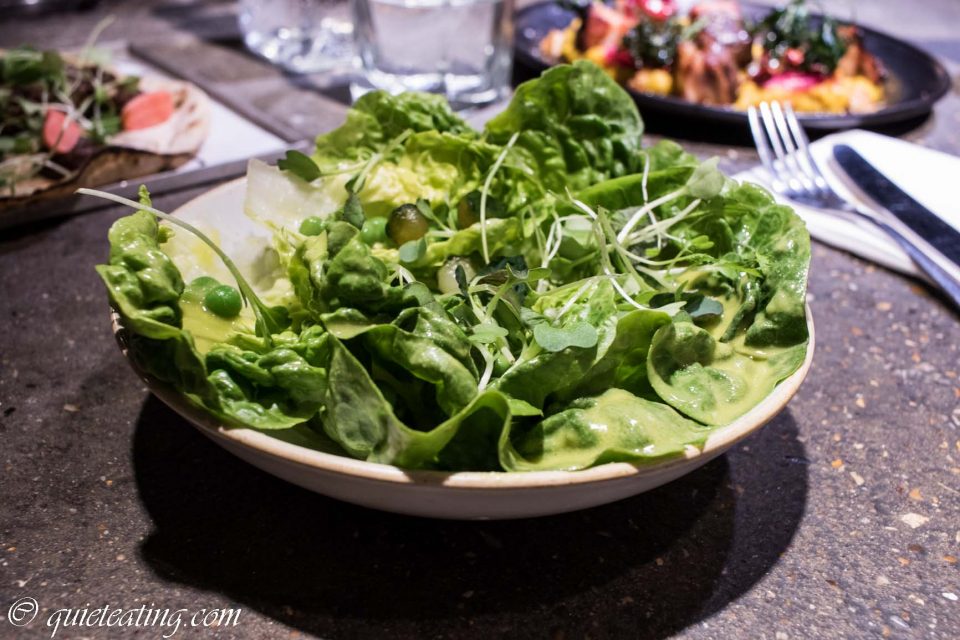 Baby Gem and Pea Salad, baby gem, Fernet Branca infused cucumber, pea and mint dressing.  Ok if not something particularly awe inspiring.  I would try something else next time to let the kitchen showcase its skills. 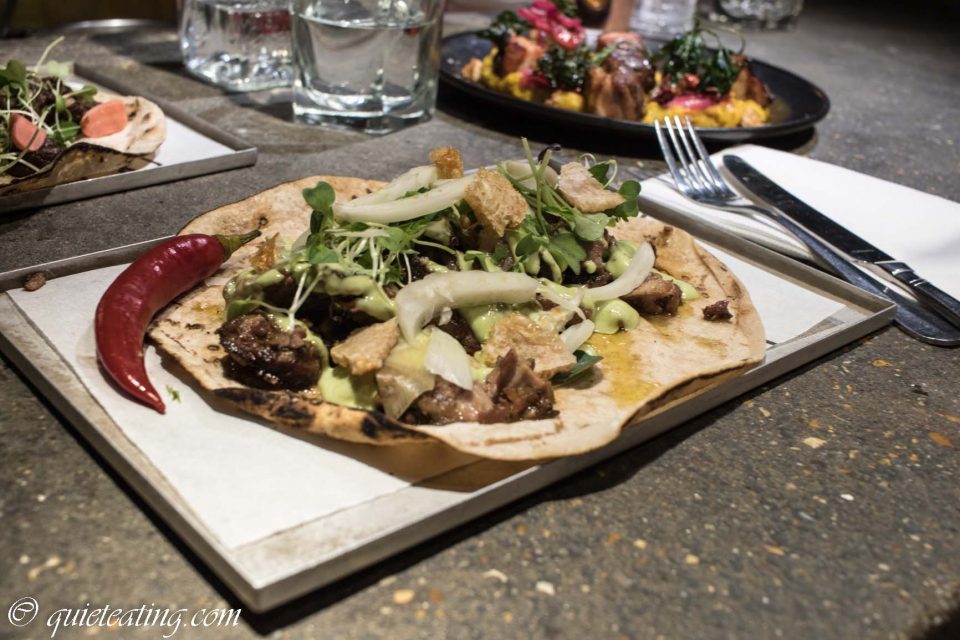 Pork Shawarma Kebab, pickled fennel, crackling and zhoug mayo.  The best dish of the day.  Succulent.  Although, perhaps the metal trays aren’t the best way to serve the flat bread as it requires a bit of sawing.  So much so, that when you have paper to soak up the oils, said tree based products become a bit soft and pliable.  Then when you try to cut the meat and bread into bite sized pieces, it is rather easy to end up with more fibre than you were intending. 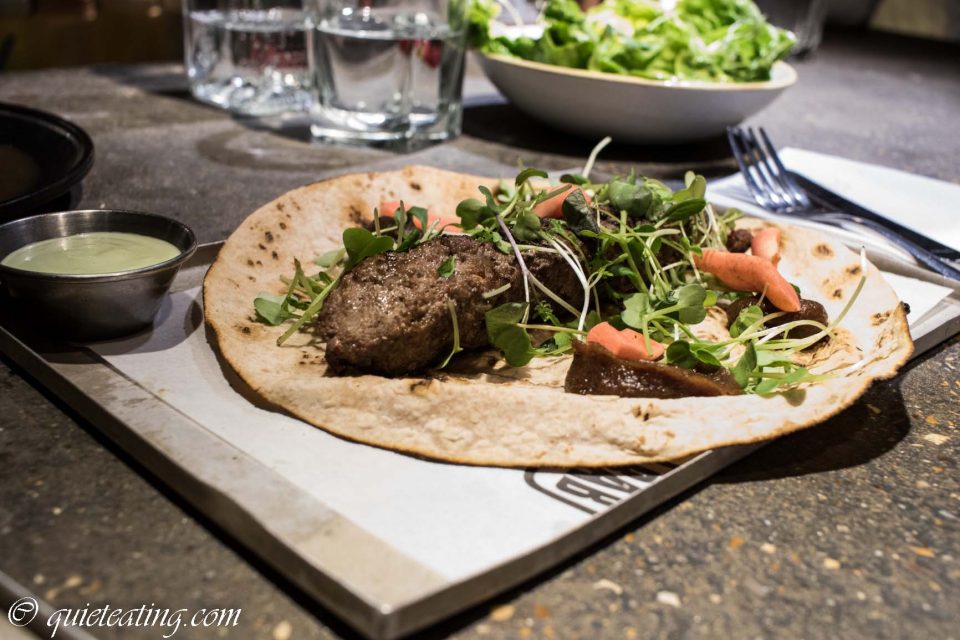 Yorkshire Lamb Adana, pea yogurt, date puree, pickled breakfast radish and Cornish greens.  Rather dry, this wasn’t really for me.  Although the lamb adana was enjoyable, it was somewhat marred by its lack of moisture which contributed to an unpleasant dryness.

Even though things would have been much better in slightly more spacious seating and if I did not constantly have to worry that I would fall through the floor, this was a good meal.  Although, if that had happened, that would have the benefit of adding another notch to my exciting foodie life.  I would be able to say that when I took a bite, the ground fell away.  Now, that would be something worth writing about.

Dinner (all of the above for 2 people) was GBP25 per person excluding drinks and service.