In this pell-mell life, there are many shortcuts that are taken to make life easier.  Like if other people like it, it must be good.

Think of those long lines outside buildings that others mindlessly join.

Those clothes you just have to have because everyone has them too.

That food that you just have to try because of raving and then particular annoying insistence.

The alternative of not following the siren call of the crowd is you might be lonely.  Then again, as others tell me (and I agree), it isn’t generally a problem for me.  I often (at least) appear to not care.  So when randomly walking around one day, I felt a hankering for some ramen.  Lucky for me, I then passed somewhere which in writing seemed to offer that.  The internet crowd had been mobbing this eatery with mercilessly good reviews. 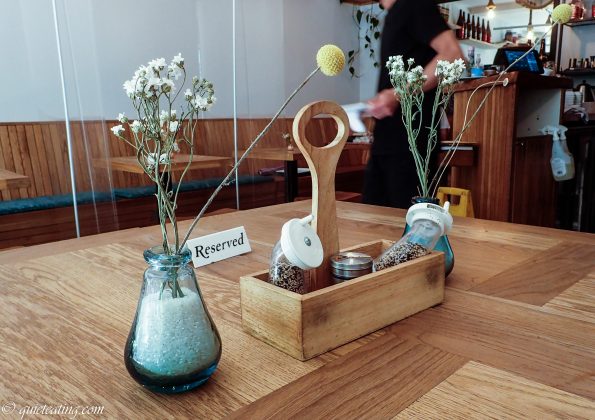 On first entrance, this view seemed to be justified as this restaurant had reserved markers on almost every table. Yet as the meal moved on, on a public holiday, we and the lone diner were all that were around in a restaurant with a capacity for 20.  Unfortunately, that was the benefit of hindsight. 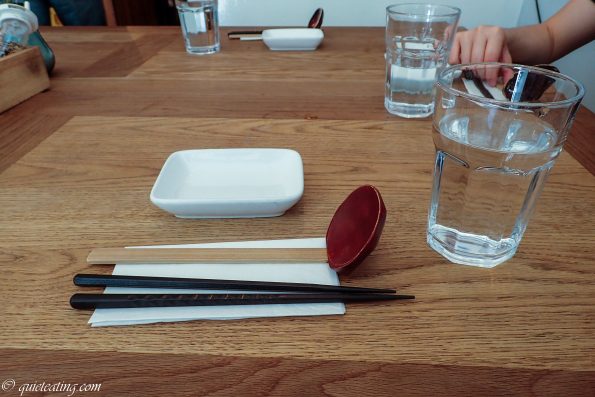 They seemed rather excited to see us.  Tap water being provided without having to ask.  Ramen spoon there to tempt you right at the start. 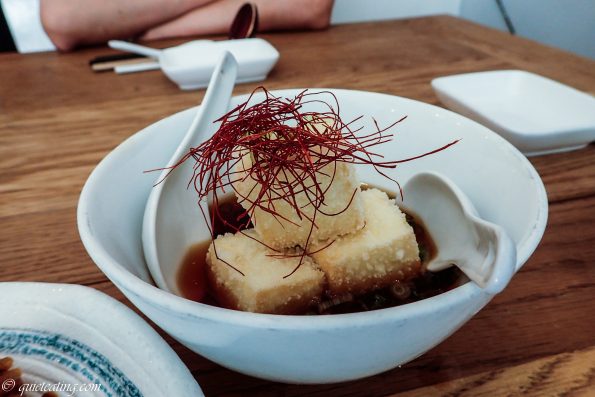 Agedashi tofu, deep fried tofu pieces & dashi dipping sauce.  It looked pretty, especially with the chilli threads.  Even if the chilli threads didn’t taste of much.  The same could be said of the dashi broth.  And the tofu.

If you bread something tasteless in something tasteless and add tasteless sauce, it doesn’t take a genius to deduce that you might end up with something lacking much of anything.  Although in these bleak days with restaurants closing left, right and centre, I tried hard to restrain myself as I should be kind.  So I kept such caustic remarks to myself. 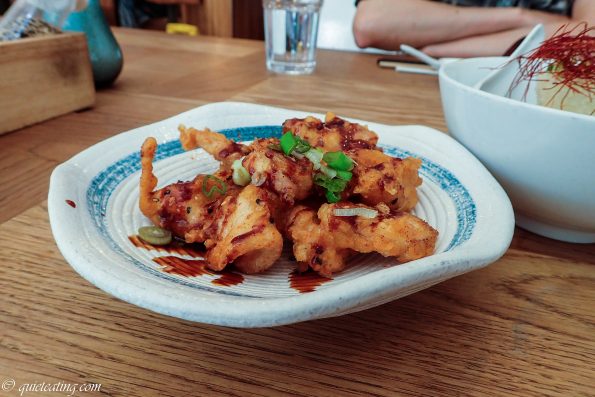 KFC, spicy, sweet and sour Korean fried chicken.  This tasted like fried breaded chicken breast with overzealous use of paprika.  It lacked depth of flavour and tasted two dimensional (even if that isn’t technically possible but you get my point).  Although at least it had more taste then the previous dish. 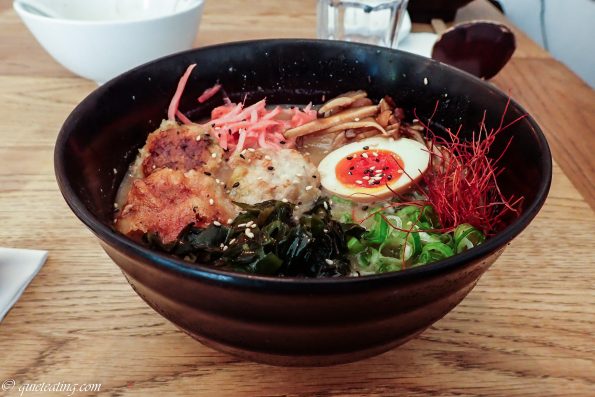 Miso ramen with naked pork, miso mushroom broth with shiitake, wakame, spring onion, pickled ginger, seaweed butter, chilli threads, naked pork gyoza and ramen noodles.  Apparently, naked pork gyozas are the the next big thing.  This strange name I would hazard a guess is to jazz up the fact that what they actually mean is that they have just fried the filling of the gyoza and put in the soup.  That in itself isn’t so great a sin (the use of semantics to make things sound better, I know I am particularly guilty of that) but more that even if they hadn’t bothered to put in its skin, they had not fried things well that well as it wasn’t fried that well.

The mishmash of ingredients confused the taste, the noodles and me.  The broth was warm but seemed to lack distinctiveness.  The seaweed tasted like the mushroom which tasted like the pickled ginger.  The pork was slightly undercooked.  The chilli threads were colourful but rather insipid.  Only the egg was flavourful but it was too small to bring things up.  The noodles were rather surprisingly alright but must have been thinking why they had been placed among such compatriots.

Looking on the bright side of life, this was a relatively inexpensive lesson that in my exuberance that restaurants are now opening up, that I should still exercise discretion.  Even though the hordes might extol the virtues of particular establishments, that is no substitute for careful due diligence.  Many unpleasant things in my life could have been avoided if I just stopped and thought a bit more carefully.  Although, this could have been so much worse.

Lunch (a starter and main) was GBP17 excluding drinks and service.