I seem to be in one of those minimalism phases.  After my pleasant visit to the DIY bakery at Scandi Kitchen, I had to try another example of an austere life.  Just off busy Regent’s Street, with a utilitarian name like Nordic Bakery (descriptive, it is), is a great place to take a break from being bowled over by tourists.  When we arrived, it was rather well inhabited.  From the rather international crowd currently in attendance, it seems that the message of Brexit and pound weakness has been blaring loudly over the tourist channels.  Good time to plan a visit to the United Kingdom.  Not so good for the current inhabitants.  However, I digress.

Here, those from outside of the country are more than welcome.  Unlike some other places where I was looked up and down with disdain.  Or perhaps I am too sensitive as maybe it was just because I wasn’t hip enough for the establishment.  The rather atypical treats on display stressed that this was not your usual English cafe.  Instead of scones, creamy cakes and muffins, you were presented with cinnamon buns, tarts and bakes.  So delectable were the treats that the particular staff member featured below was at a lost for words.  Or perhaps I should say spoilt for choice. 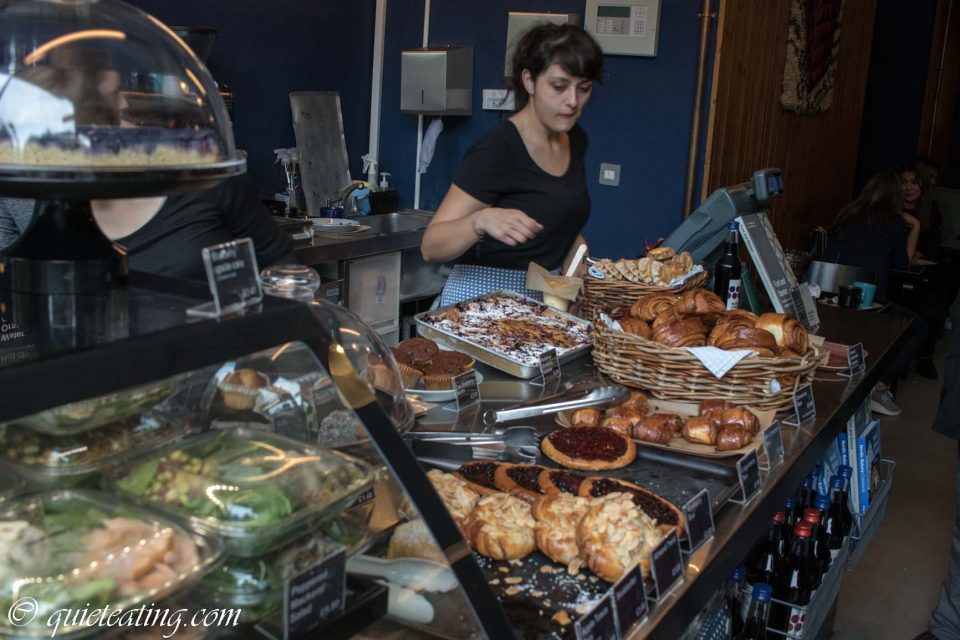 The baked counter with all the temptations waiting.  Things were so appetising that even the staff pictured above was pursuing the treats with pursed lips.  Which I can understand, hence why I do not work in the food preparation industry, it would make me twice the man I now am.  Moving on from discussion of my mental fortitude, let’s see below for how things tasted. 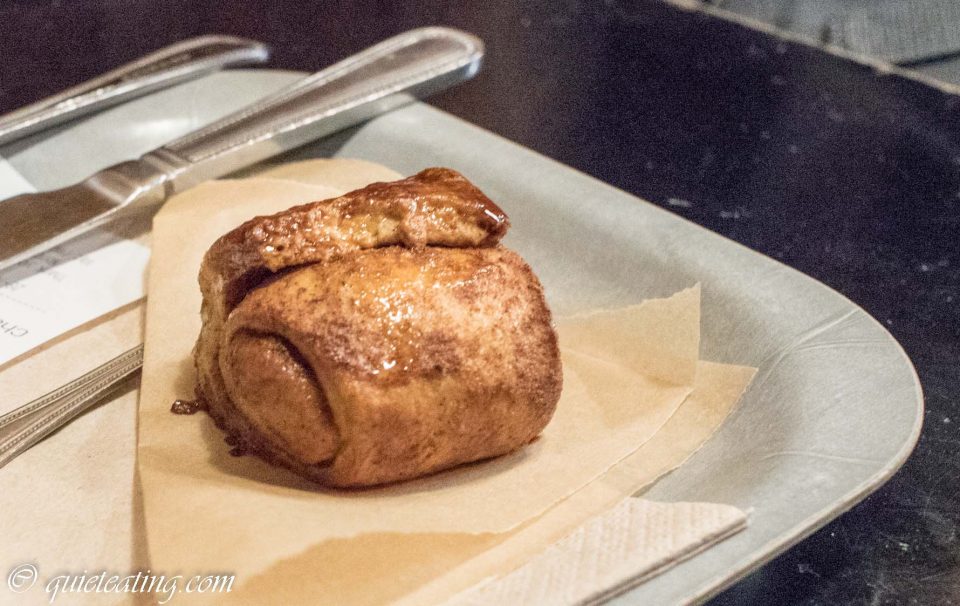 Mini cinnamon bun.  Firm outside, moist inside with delectable cinnamon within.  A great treat, although probably not as much to my tastes as Ole & Steen’s social.  I prefer things a bit softer.  The picture here may also be deceiving, this was puny in side to its larger cousin (photo not included) whose gargantuan size dwarfed its little cousin.  I would think that six of the small guys could fit in the bigger one. 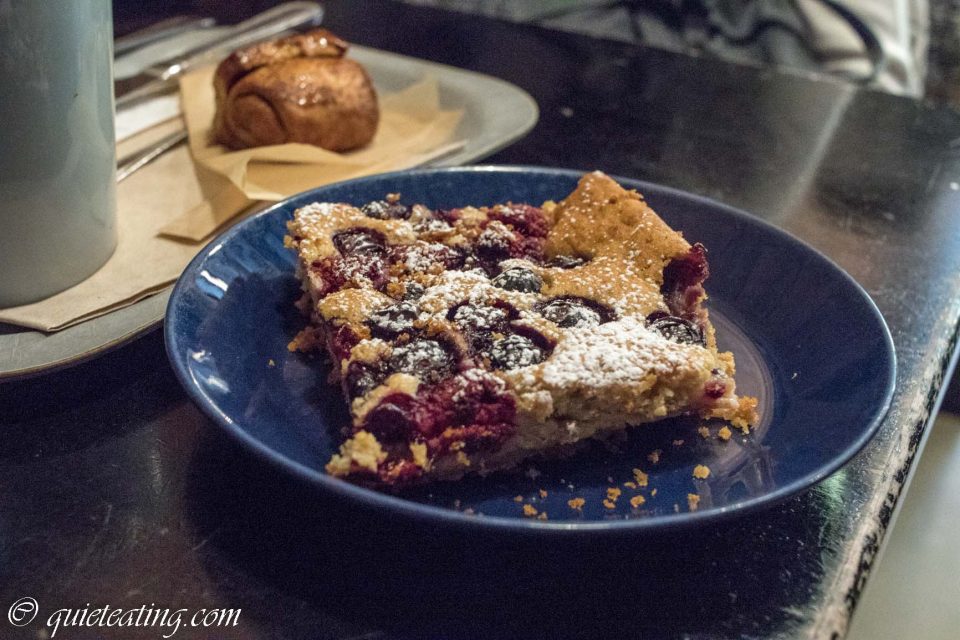 Raspberry and blueberry oatbake.  As my fellow diner pointed out, this isn’t hard to make.  Yet, in its simplicity, it is still something done well.  Tart raspberries, sweet blueberries, firm base, squishy top, a collection of sensations to be savoured. 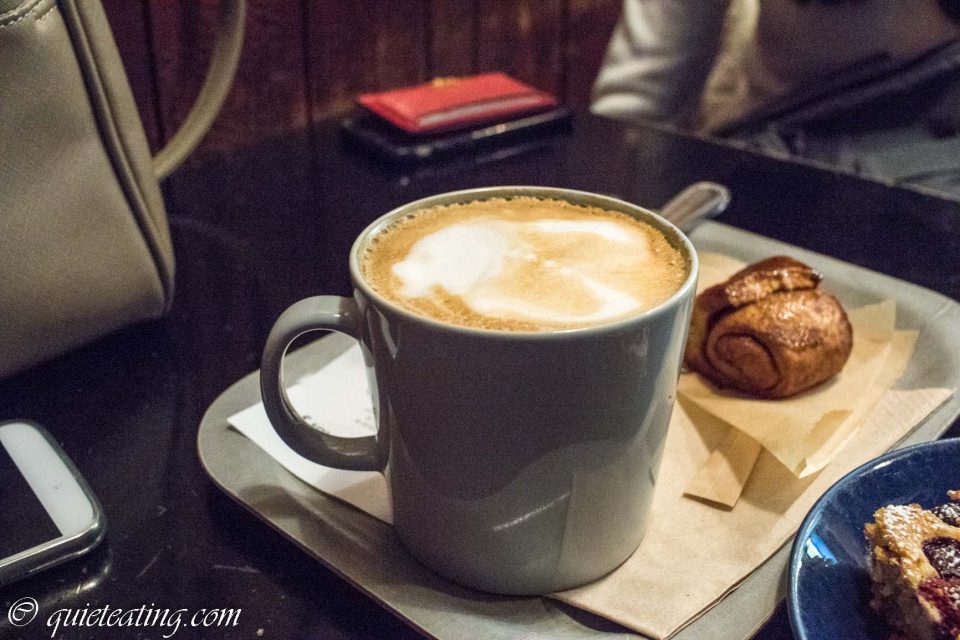 Latte.  Decent, if nothing special.  I found it a bit too milky subduing the coffee taste.  While I usually like frothy things, in this case I prefer something with a stronger coffee taste.  Or perhaps I am slowly becoming a bit of a coffee connoisseur, expensive hobby that that may be.

Sitting back to enjoy some treats in a pleasantly buzzing atmosphere, life was good.  The baked bun was not bad, the bake excellent, the coffee merely a little above average though.  So although it is a convenient enough place to be if you are near the lower half of Regent’s Street and hankering for a break, this is a place that should be on your list.  I do wonder when DIY cars might make an appearance in London.  Now that would be interesting.

Coffee and a cake was GBP5 excluding service.