There is much to be said about the humble sandwich.

Legend (or Google) tells me that it came about because the Earl of Sandwich wanted something that was convenient to eat.  Something that millions of office workers around the world can emphasize with.  He sounds like the original precursor of the harried officer worker today, mindless chowing down on whatever is easily at hand.

Yet even if it is convenient, it doesn’t mean that it has to be bad.  That’s where Morty and Bob’s comes in. 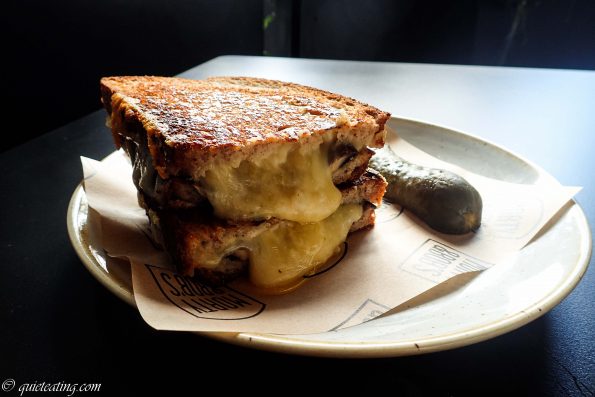 Roast mushroom & truffle.  However, convenience does not mean that things are not good.  The top was crisp, the cheese inside was oozing, the truffle infused mushrooms were delightfully meaty.  With the tart gherkin on the side, this was a sandwich worthy of the Earl. 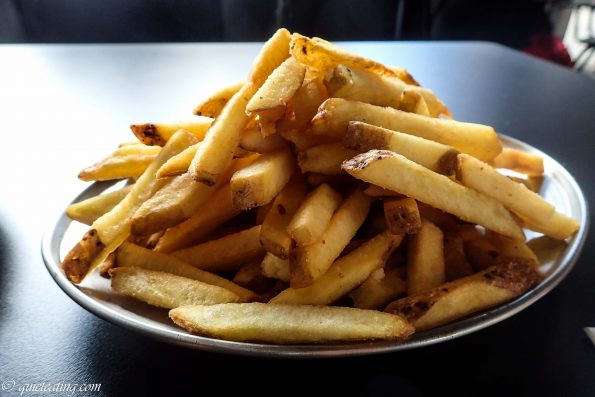 Hand cut fries.  The generous helping of fries completed the meal admirably.  These are not to be confused with the reconstituted potato of MacDonalds and like.  These are real potatoes as the bite and structural integrity of the chips was on avid display.  They had a pleasing bite to them rather than the mash potato consistency of reassembled fries of chain – as it seems that when you break down things, the remade isn’t as good as the original.  If you put Humpty Dumpty back together, he isn’t the same.

It is perhaps fitting that this humble sandwich joint is around the corner from the London Google campus.  As if those particular officer workers ever come out of their office with its indoor slide and food and coffee on demand, there is something good on offer, which suits their requirements, just around the corner.

A toasty and fries was GBP11.50 excluding drinks and service.