I thought it would be interesting to visit a restaurant headed by a celebrity chef.  Been a while since I’ve been in one.

Mere is the residence of chef Monica Galetti, of Master Chef the Professionals fame. In Master Chef, she rains a quite brutal critique on the participants.  So I had high expectations at her establishment.

I know that expectation and waiting can sometimes enhance the joy when the gift/food comes but when things cross that invisible line of joyful expectation to annoyed waiting, things can go downhill quite fast.  The small little stone at the start can soon become a rather more hefty boulder at the bottom.

This is my long winded way of saying that we were left waiting for a rather long long time. 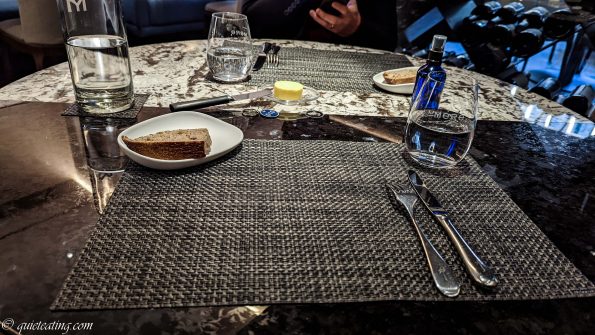 There was an attempt of distraction provided by the bread.  However, it lacked in both quality and quantity.  The bread in the corner was sadly rather boring being a rather boring wholewheat slice which lacked bounce.  Being an annoying armchair critic here, most of my homemade breads taste better.

To make matters worse (or remove any possible excuses), I can’t pretend that I got the wrong end of the bread stick as there was no choice with the bread here.  So I can hazard a guess that the bread is all consistently bad.  The single offering was thrust upon us in a take it or leave it gesture.

I did eat it all but that was because I was hungry and an attempt to avoid my stomach acid chewing a new floor in my tummy as it took over 30 minutes for the first course to appear. 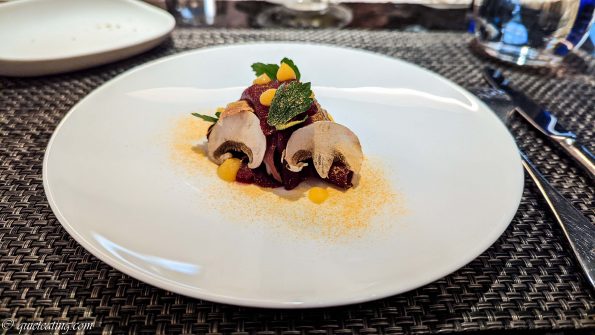 Beetroot, mixed spiced duck ham, mandarin gel, mushrooms.  Carefully constructed, it was a pretty sight to behold.  It was an interesting amalgamation of flavour as the sweetness of the beetroot and the heavy meaty flavour of the duck provided an interesting counterpart.  Perhaps a little too heavy a beetroot taste for me though.  That purple fruit/vegetable was never one of my favourites so perhaps it would have been better without it, then again there is no pleasing everyone and I was not in the best of moods at this point. 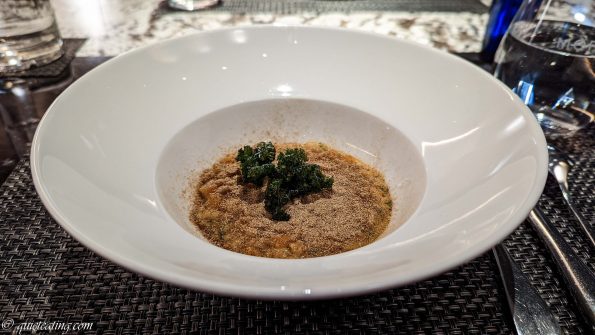 Spelt, butternut squash, celeriac, creme fresche, cep powder, kale.  This was rather good as it almost seemed like risotto except with more texture and earthy flavour of the smelt.  Probably the best dish of the day.  Only problem is that this arrived 30 minutes after the last, which was frankly a bit distressing that the kitchen continued to suffer from this malaise. 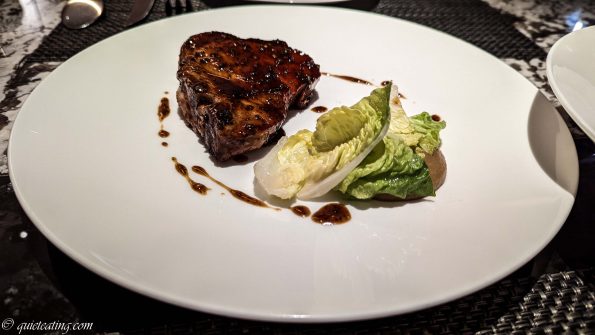 Pork T-bone, cornichon parsley, shallots & capers, baby gem lettuce shallot puree.  It was dry.  Something which I would have thought is something a bit harder to achieve with a fatty cut and bone-in cut of piggy.  I thought that the shallot puree was chestnut at first but upon checking the menu realised that my tastebuds are failing me.  It was shallot puree, in which case it was very nicely done.  Couldn’t really save the rest of the dish though. 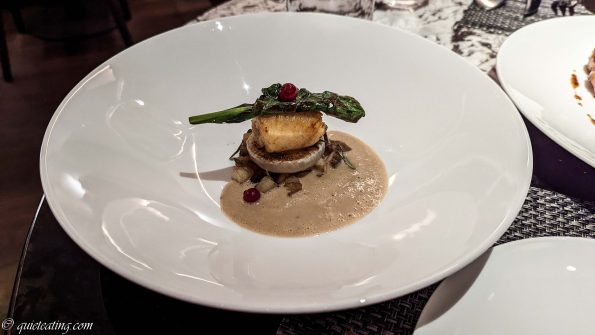 Skate, Tokyo turnip, Jerusalem artichoke, sea purslane, chestnuts veloute.  Excellent.  This showed the flair of the kitchen, which I suspect has propelled Mere into the spotlight.  In which case, best keep all other dishes (and the service) outside such targeted light.  The skate was slightly overcooked but being a more oily cut, this did not dry things out.  The turnip, artichoke and veloute base was excellent and a succulent combination with the skate cut.

Sadly the meal had to stop there as after 90 minutes, the finish line was not just out of reach but out of sight.  Even if the food was all fixed to taste like the last dish, something needs to be done about the service.  Not that it wasn’t there but rather than 30 minutes per course is not cutting it a bit fine but taking the Micky.  I wonder what would have happened if this restaurant appeared on Masterchef the professionals.

It would have been an interesting episode at least.