I am in shock.

No.  This isn’t about the food but rather more recent events.  I will not comment on the should and should nots, hows and whys but just remind people that life is sometimes a Very Serious Game.  You don’t always get to re-roll the dice when you get a result you don’t want.

Such life changing decisions run from international body status to what to eat for lunch.  I will not cast any aspersions on which I think is more worth of careful thought.  Personally, I agonize over both types of decisions.

So this is how we ended up at Mazi.  Catching up with a couple who have recently had a young baby, we searched extensively for a locale that would accommodate precocious children and the accompanying parents.  Which is how we ended up in a quiet outdoor back garden in Notting Hill gate.  I admit to feeling a bit of deja vu here as it seemed as I had stepped into another favourite location of the ladies who lunch.  Lots of babies around here too. 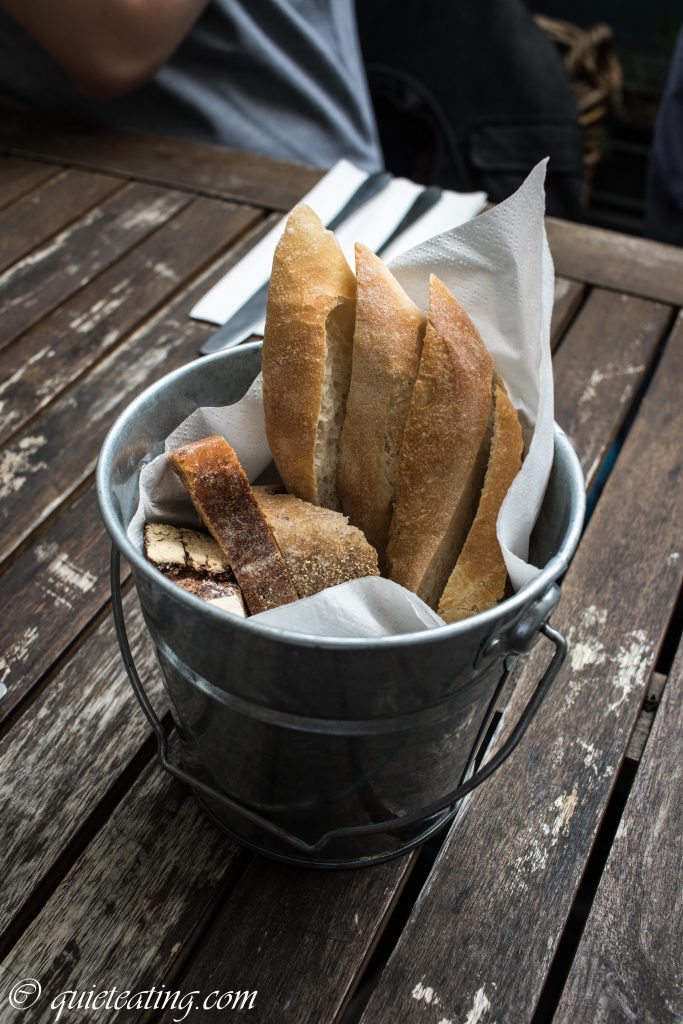 House bread.  French white, brown seeded and some others.  Nothing to be excited about. 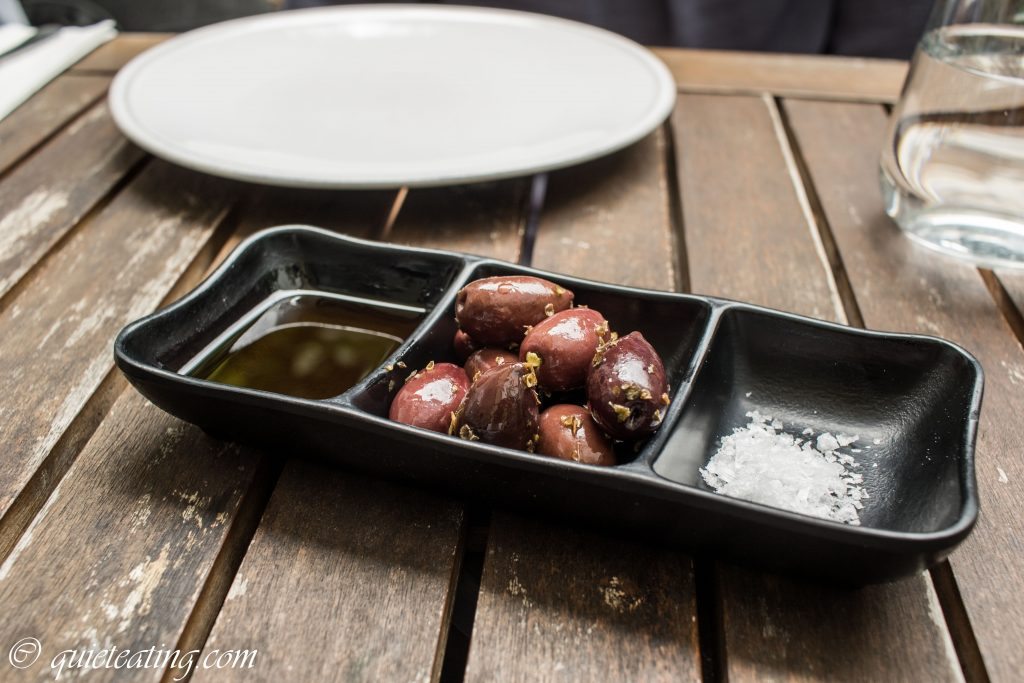 Olive oil, olives and salt.  With some diet focused condiments.  No butter here.  No no, that would never do.  Must not impact the figure which had recently been through so much trauma. 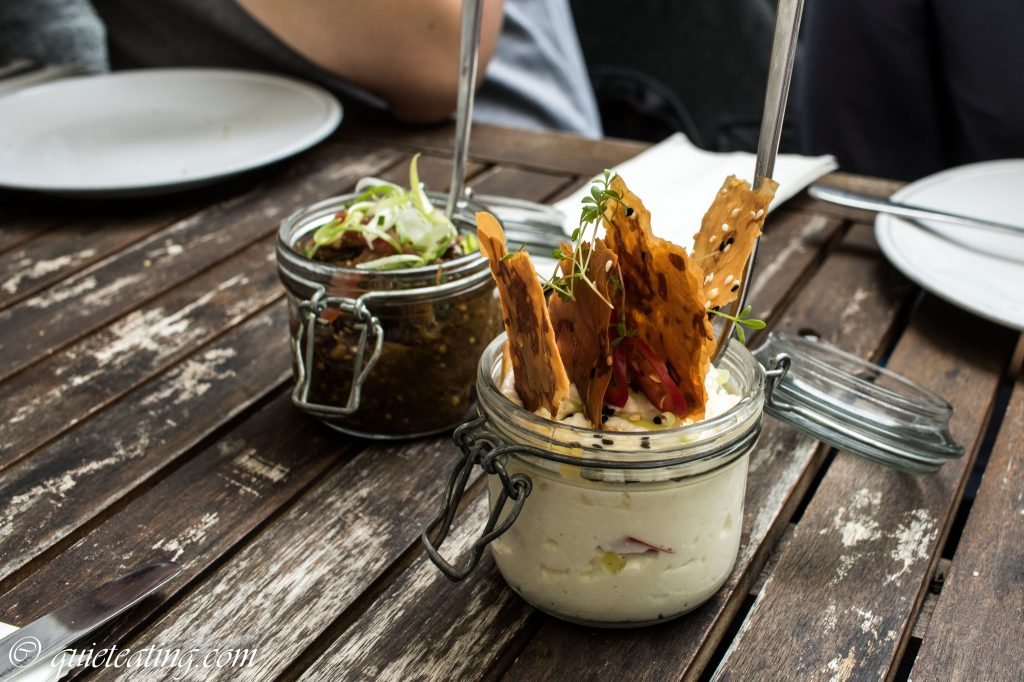 Spicy Tiropita, broken filo pastry, leeks and chillies.  Creamy and surprisingly heavy, this was decent.  It was also billed on the menu as “jars”.  I thought they were just being creative with the use of language, kind of like me.  I found that they were being literal, not the way I usually talk.  Yes friends – I literally don’t think you are that deficient, short sighted or simple.  After all, you know much more about the consequences of Brexit than me.  But that is all water under the bridge or should I say water in the channel.  Let’s leave that to lie and enjoy lunch. 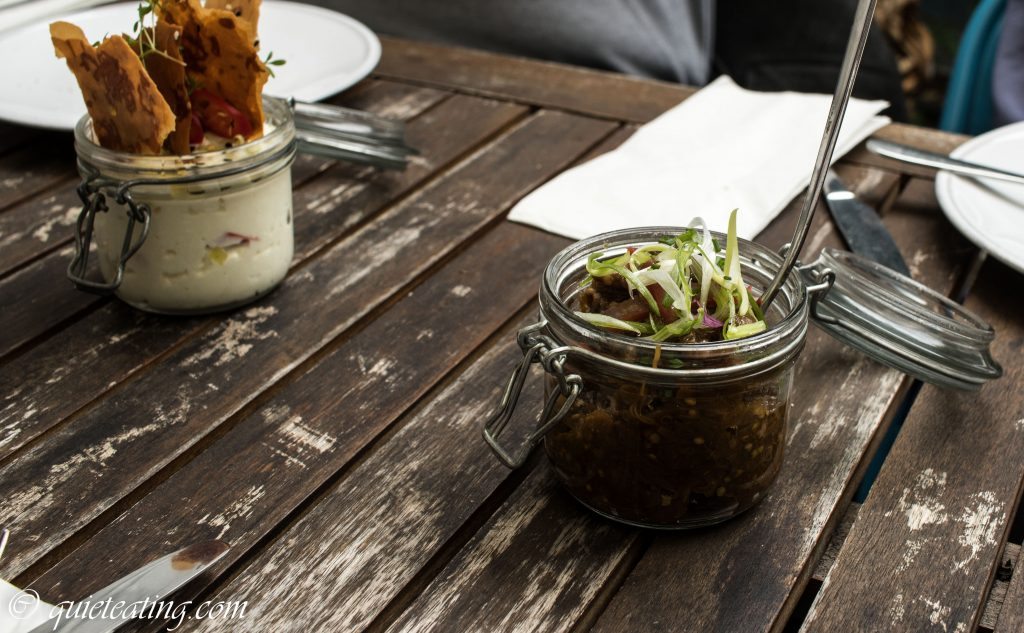 Grilled Aubergine with soy and thyme honey.  With a delightful texture and a meaty vegetable taste, this was not bad.  I had hopes that this was what things could have been.  I mean the meal rather than the state of the EU. 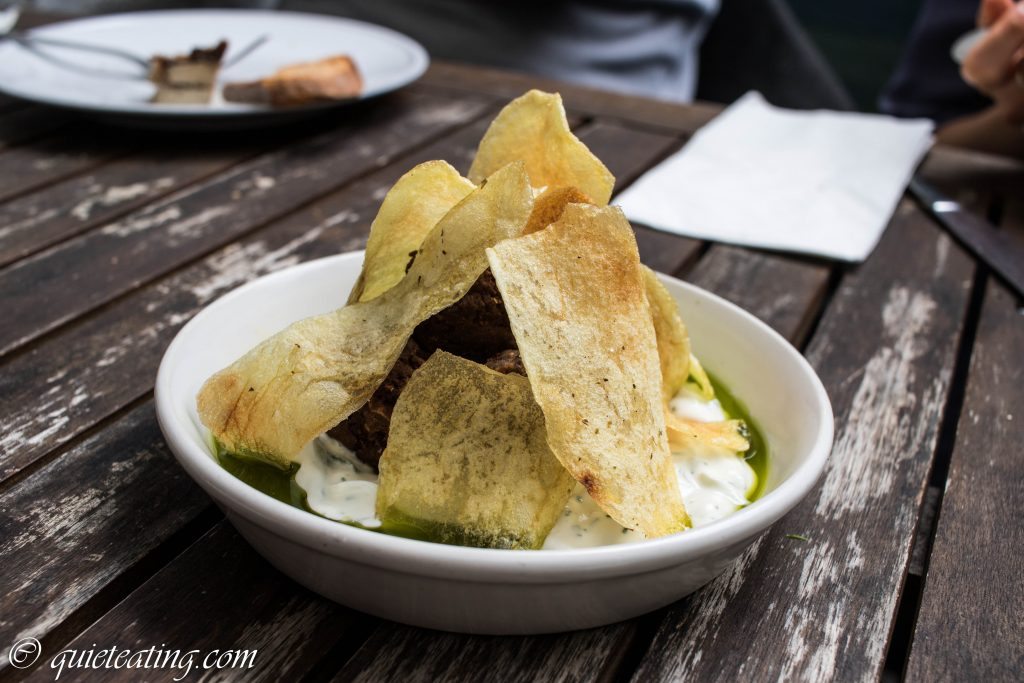 Grandmama’s Meatballs, handmade crisps.  The meatballs were ok, although they suffered from overzealous cooking.  It seems that Grandmama might have left the stove on for too long.  She also could have done with a larger dose of compassion.  The five rather minuscule balls were overlaid by crisps and then doused with pesto and yogurt.  Mediocre at best, rather pitiful in the alternative.  Hopefully, unlike the choice of the new British leader. 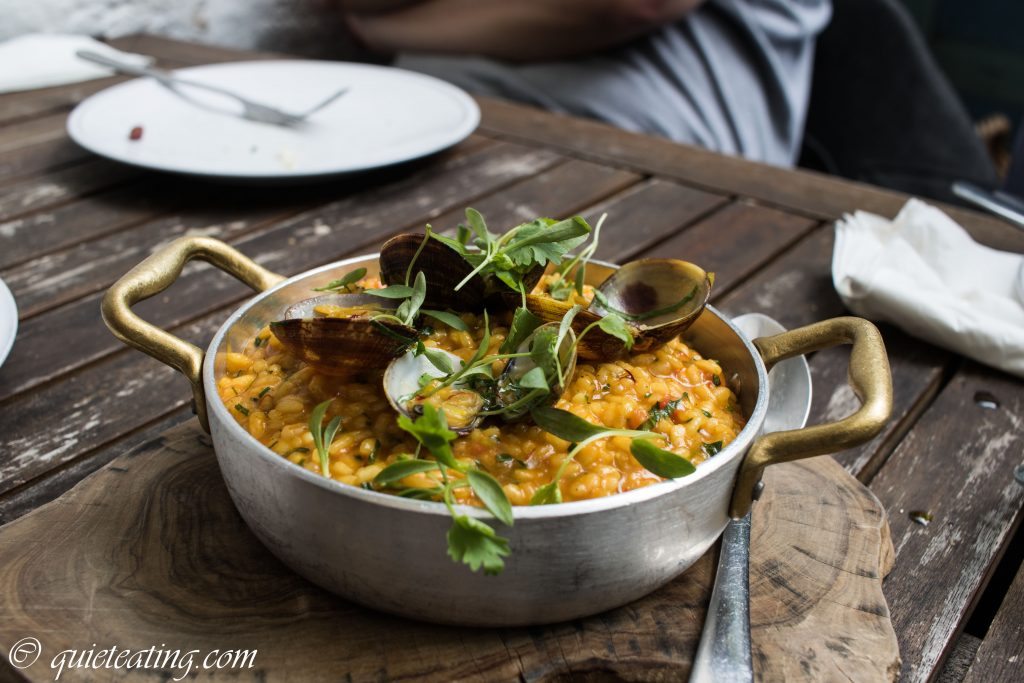 Clam and Prawn Risotto, roasted tomatoes, lemon and saffron.  Here was a dish to provide some much needed joy.  The risotto was cooked carefully so you could feel each individual grain yet the rice had been deeply infused with the aromatic and deeply satisfying flavour of saffron.  This was almost enough to make up for the sins of the past. 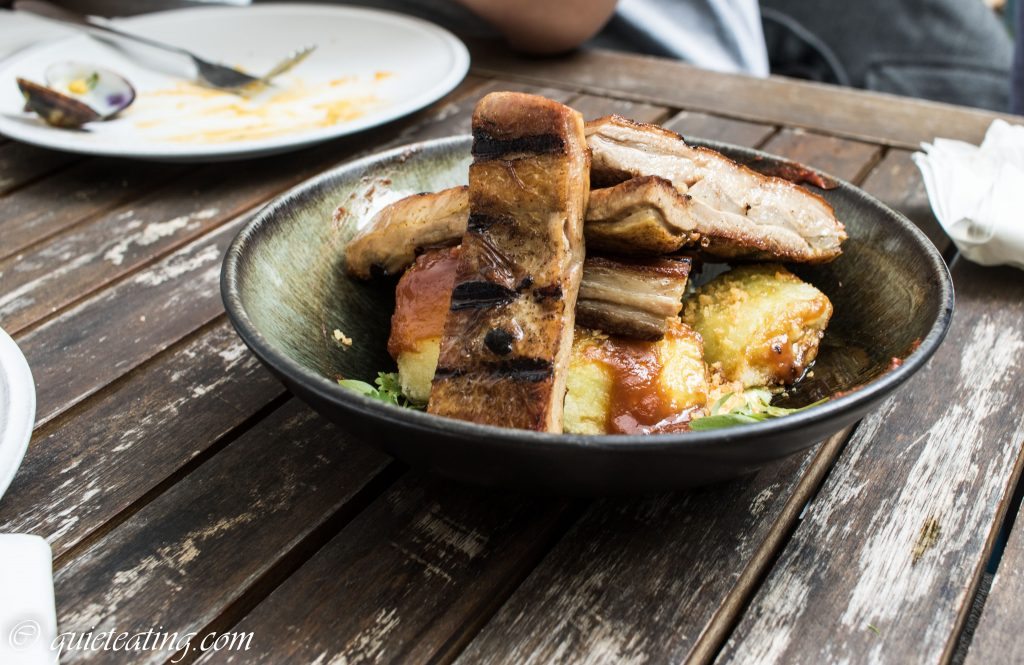 Crispy Lamb Belly, miso aubergine, chickpea and tahini paste.  The lamb wasn’t crispy.  Yet on all other accounts it was a success.  The succulent layers of lamb belly with eggplant and peas was an interesting and satisfying dish. Looks like those “immigrants” don’t bring only bad things with them.  Not if they bring more things like this. 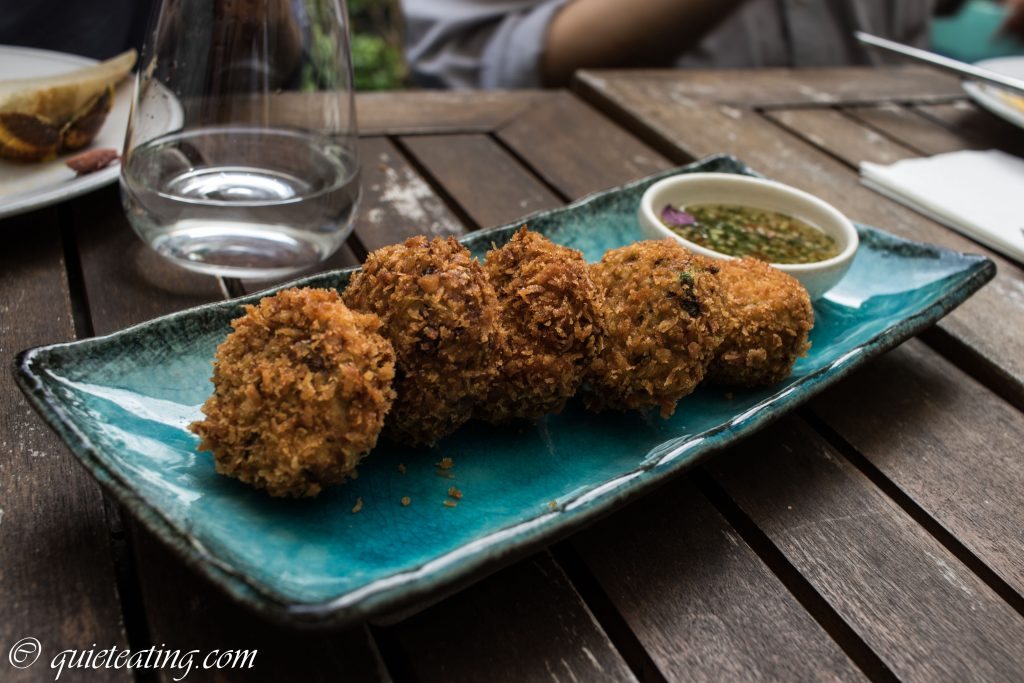 Courgette Cakes, cucumber and mint dip.  Although not really an inspired dish, these were done with care.  The moist courgette interiors were offset by an exterior full of crunch.  Now we will just have to see if the UK is like this in its negotiations with the EU about its future or lack thereof in the Eurozone. 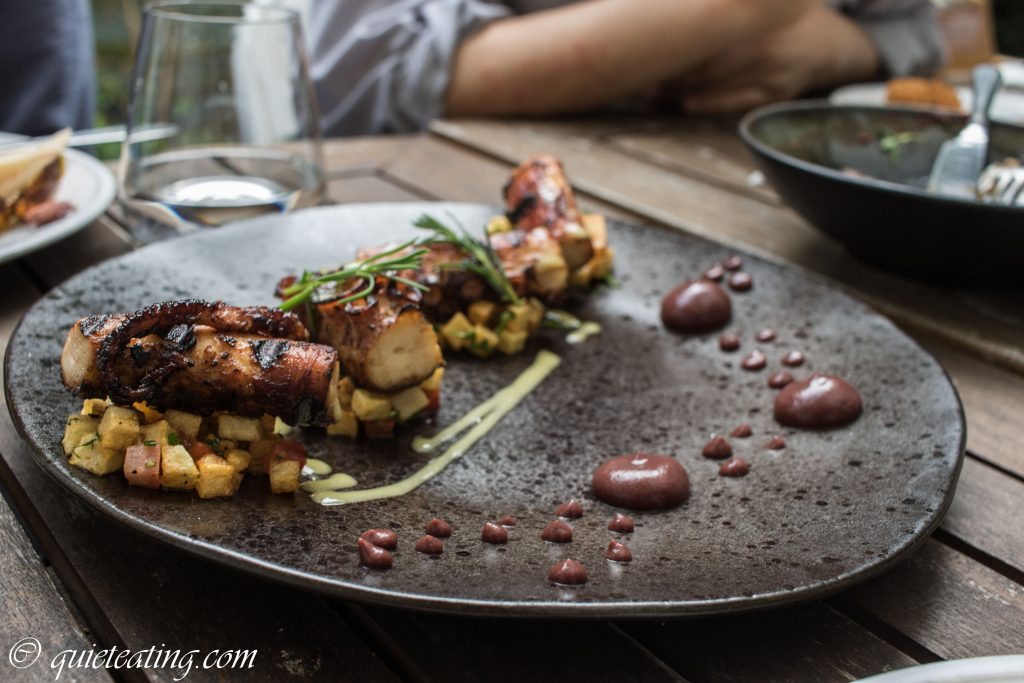 Grilled Octopus, garden herb potato salad, olive tapenade.  Looks great.  Tasted much worse.  The octopus was sadly rubbery and overcooked.  It had so much potential as it had been carefully placed on to heaps of painstakingly created potato cubes.  Almost reminds me of the possible end of the grand European experiment.  Greatness undermined by things seemingly so small and insignificant. 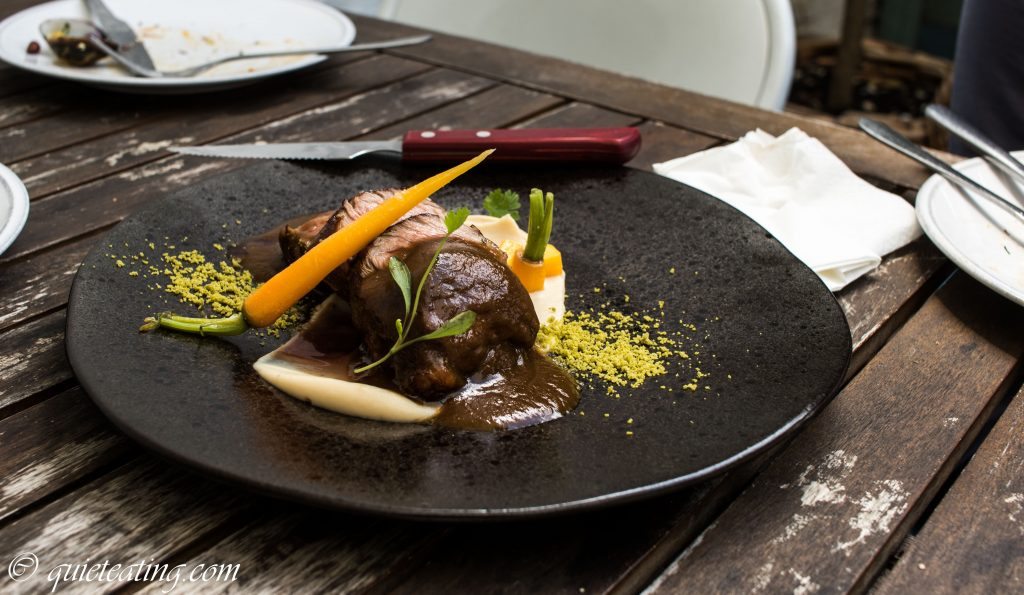 Lamb Rump Sofrito, baby carrots and celeriac purée.  The lamb was obviously of high import, the seasoning and accompaniment acceptable but the price a bit extortionate.  At almost double the price of the aforementioned lamb dish, we expected great things.  We were rewarded with a dish which sadly seemed to end the meal on a low note.  The baby carrots and celeriac were not enough to lift up this sadly underwhelming dish.  Looked great but disappointed once tasted.  We will have to see if the UK’s decision will follow the same.

In an affluent district such as Notting Hill Gate, the ambience did not disappoint.  Rarely have I have been surrounded by so much female company.  With many babies being passed around the neighboring table and so many immaculately dressed ladies, I think I might have accidentally stepped on to some type of movie set.  With such care taken by the attendees of this meal, it makes the food, rather overpriced, underseasoned and overzealously cooked, even more disappointing.  I am not saying here that the food was below average but rather that it was only disappointingly slightly above.  Here, we unfortunately did not get what we paid for.  I make no allusions to the recent political situation in the UK of course, but if you are in need of a little cheering up, this is not where you should go.