Kurobuta.  Black pig in Japanese.  A particular breed which I loved to chomp on when I was resident in the Land of the Rising Sun.

So I admit to being a bit excited that I would maybe taste a glimpse of sunlight while in dreary London.

To enjoy this treat, we journeyed into the depths of deep, dark and scary Chelsea.

Kurobuta, we heard was a fantastic Japanese izakaya (pub) serving sharing plates.  All in vogue in London it seems.  I guess it makes it easier on the kitchen as they don’t have to watch the timing for dishes. 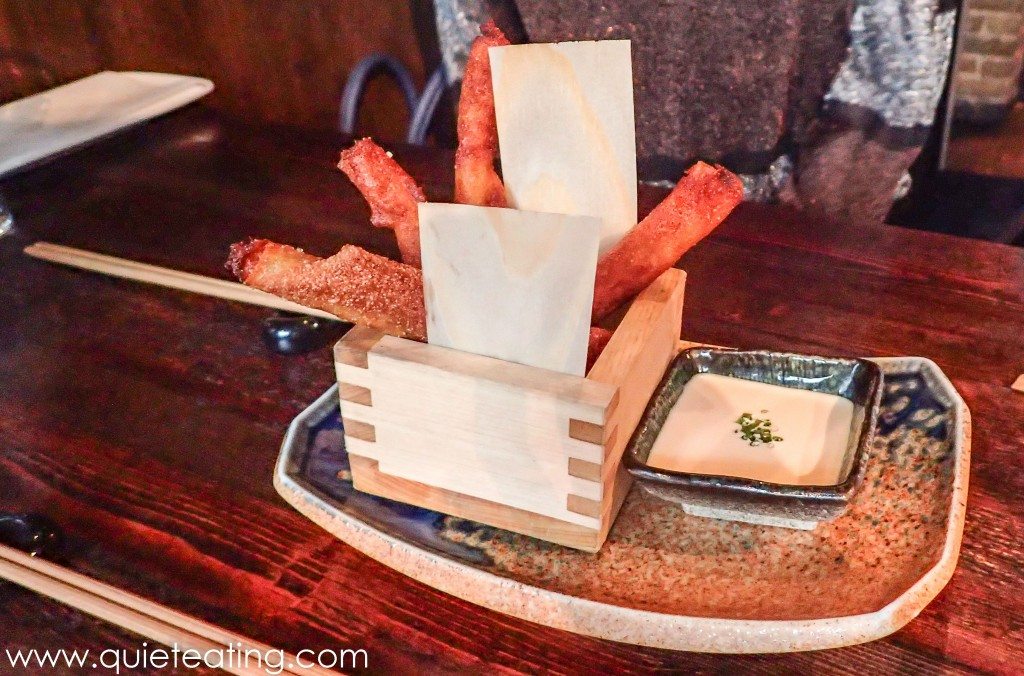 Jerusalem artichoke chopsticks with truffle ponzu sauce.  Interesting, although this kind of tasted like fried pastry sheets to me. 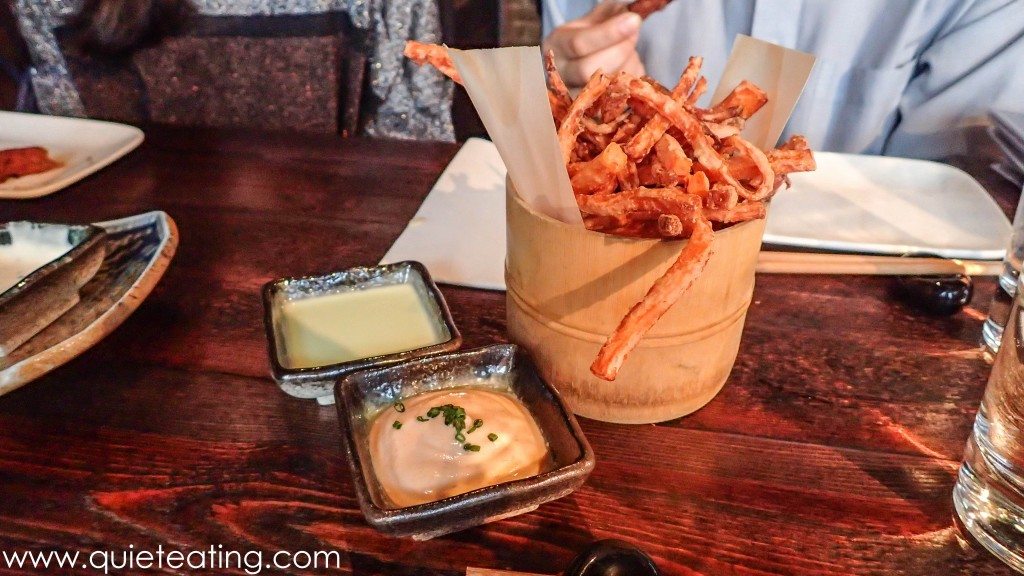 Sweet potato and soba ko fries with sauces.  I had thought that these fries would be a bit too sweet for a savory dish.  However, I was pleasantly surprised as these were crunchy, juicy and tasty in a savory way.  The sun seemed to be rising a bit. 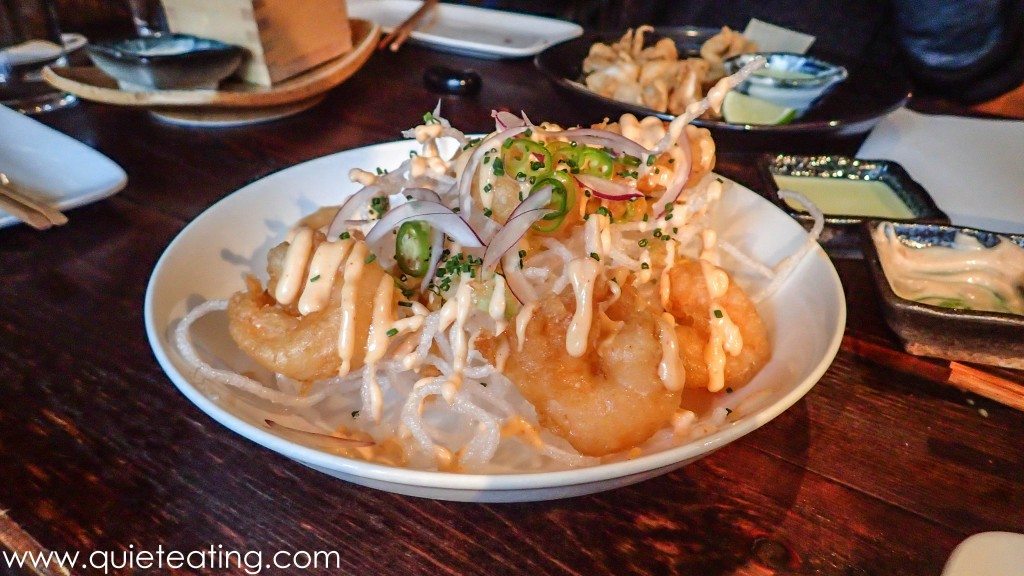 Baby shrimp tempura with kimchee and kimchee mayo dips.  These were ok but seemed a bit heavy on the oil.  We felt that these were taking a bit of shine away from the experience so far. 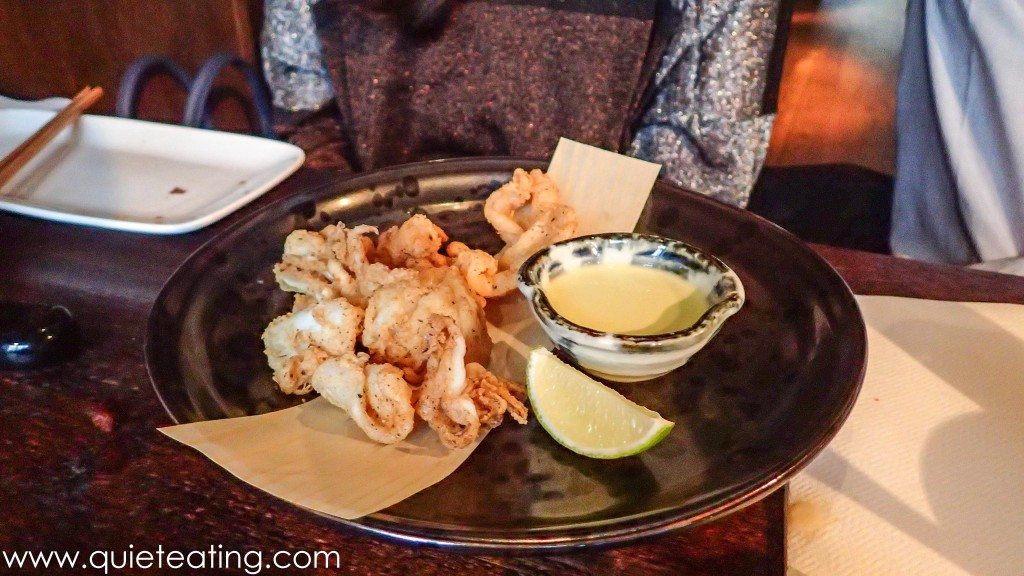 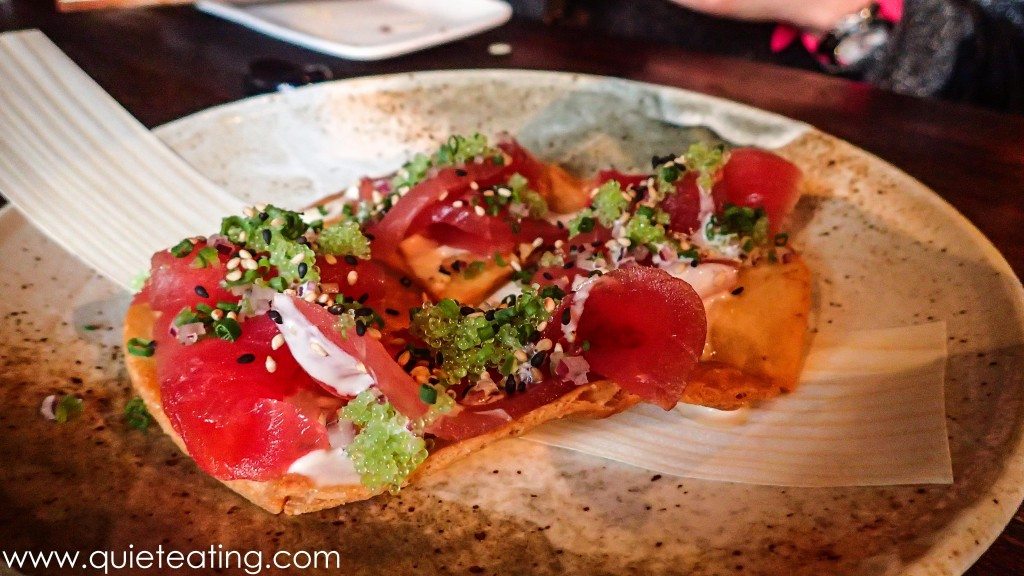 Tuna sashimi pizza with wasabi tobiko.  A pizza, how exciting!  I didn’t know you had these in Japan.  It was, kind of boring.  Not bad, but boring.  It could easily have been named sashimi on crackers…

Spicy tuna munchies with tempura crunchies.  These were nothing special. It felt a little like the restaurant was trying a bit too hard to come up with new exciting and experimental food. 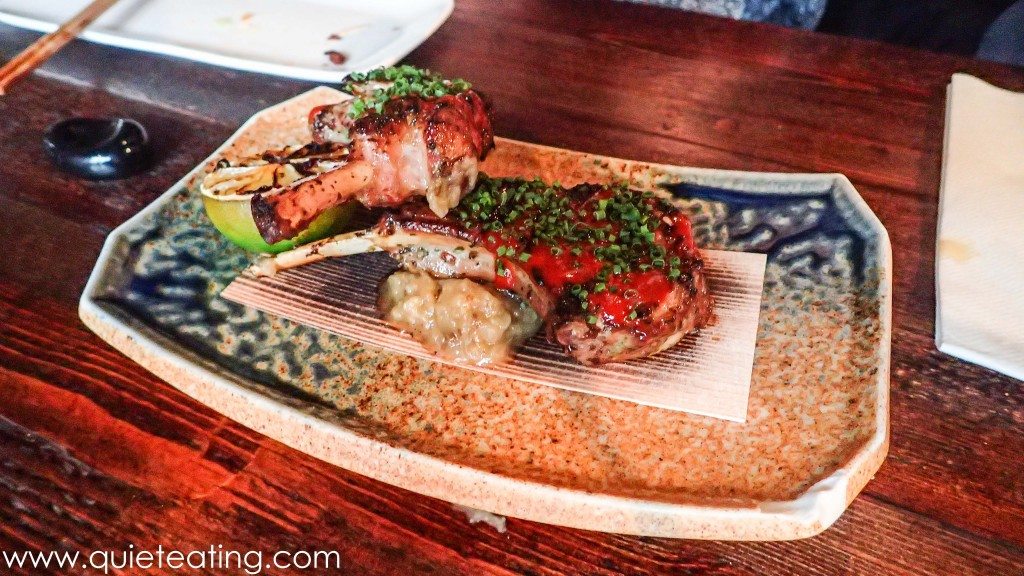 Smoked lamb with smokey nasu and spicy miso.  These were a bit lifeless.  Not that you would usually expect lamb chops to be alive and kicking.  Probably something else to worry about if that was the case. 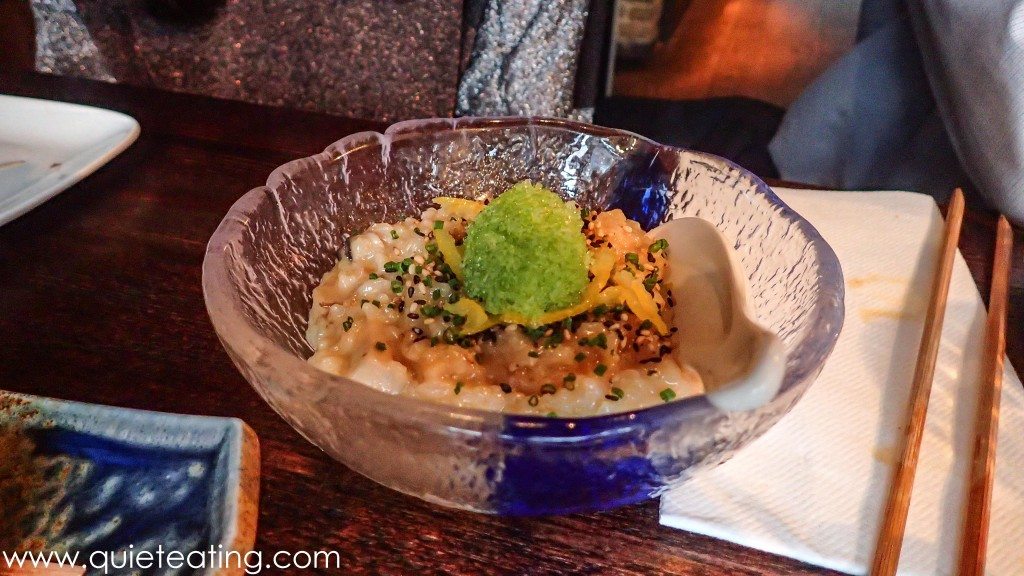 Hikikomi gohan, rice hot pot with mushrooms and wasabi tobiko.  This was a great little surprise.  I usually express my apprehension when restaurants attempting to masquerade as some variant of Japanese expert attempt to serve rice.  Especially daring in this case as there was no meat to distract diners from whether the rice on its own was carefully done.  Although in this case, they had me fooled.

It was at this point that we had one of the most amusing conversations I can remember with a waiter.  When we asked for a certain dish, the response was “urhh…  I think you should reconsider.”

Naturally we asked why.  The response was “the chef who prepares the dish has his off days”.

To which we responded why was that?  The response “let’s just say that I wouldn’t eat it.”

Ok, you’ve convinced us with your honesty. 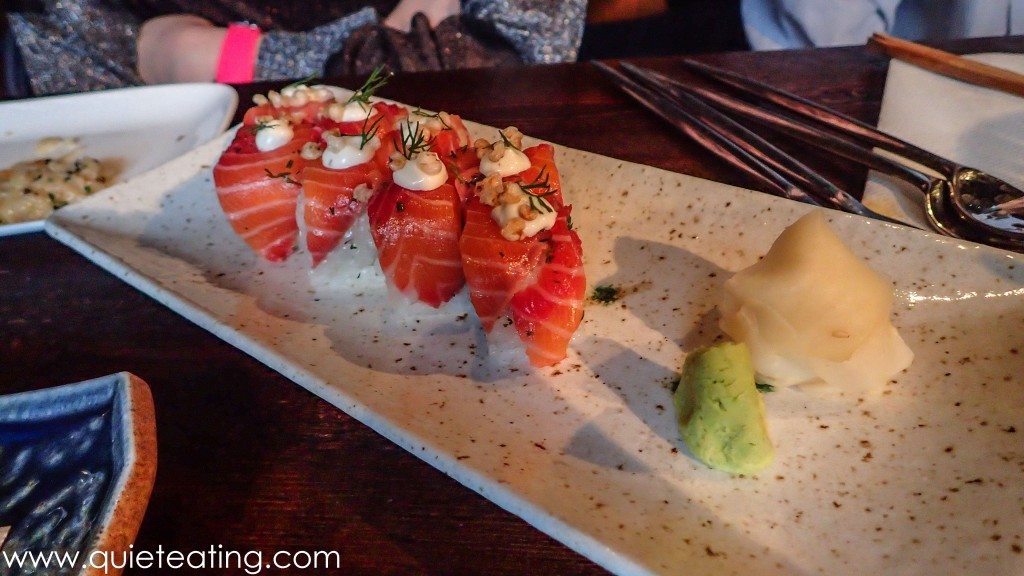 Salmon gravadlax and avocado maki with dill mayo.  As you maybe can see by the photo, this was where the sun was setting.  Tastes a little better than Itsu. 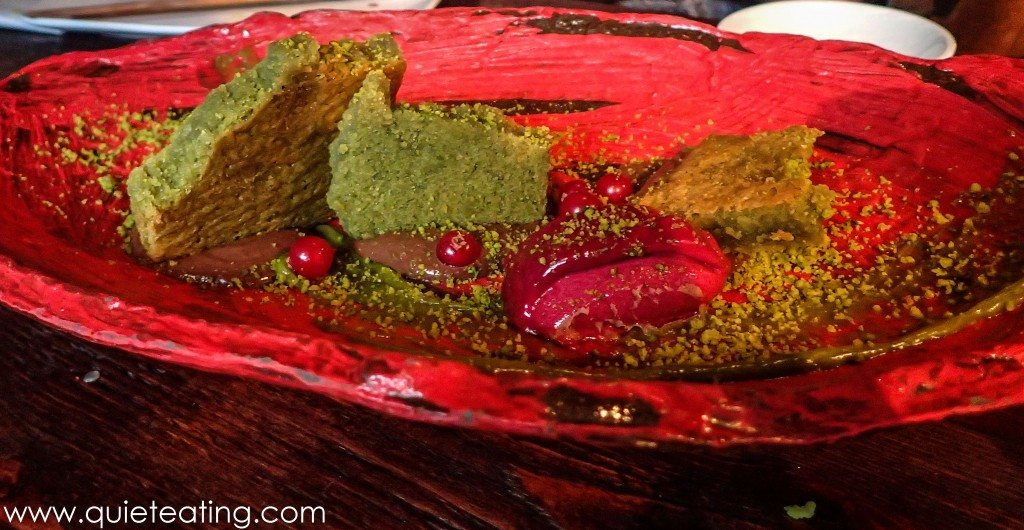 Pistachio cake, chocolate mousse, blackcurrant sorbet and redcurrants.  An interesting mix of flavors with sugary, tart and fluffiness all wrapped into one.  Although the strong sour taste bestowed by the blackcurrant sorbet seemed a bit too much for me.

The black pig was an oily experience with surprisingly honest staff.  There were highs and lows, although the light seemed to more often sit above the horizon.  Although I must applaud the surprising honesty of the staff, which managed to avoid too many pitfalls in the food.  An above average experience.