To paraphrase something I have often heard, I dream of ramen.  In  short, I am a little obsessed by noodles.  Just noodles, you say?  Why, what’s so special about noodles? Aside from the ramen craze sweeping the English capital at the moment, I think it is a reversion back to basics.  Ramen is actually seen in Japan as fast food, similar I say to British fish and chips.  Although in the case of good ramen, it’s not so easy as just emptying the packet of MSG into a pot of boiling water.  Creating real stock requires much toil and labour.

Apparently at the best places, the ramen broth is constantly boiling in the back and is  constantly topped up with new ingredients.  The years’ of constant boiling create that lovely umami flavour which would greet me like a familiar hand shake every time I returned to my favourite ramen joints.

Having been to Kanada-Ya several times, I thought it was high time that it had a review. 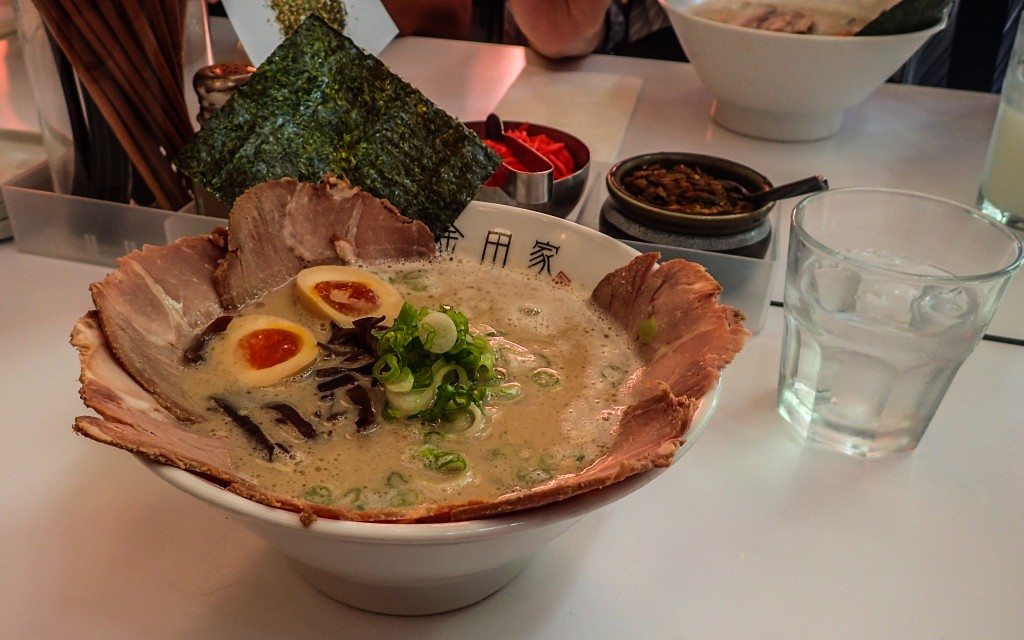 The steaming bowl of ramen.

Interestingly, Kanada-Ya is the first place in London that offers you the ability to choose noodle hardness.  This is a standard question in Japan when you sit down at a ramen shop.  How hard would you like your noodles?  Here, the same as Japan, you get to choose between very hard, hard, regular and soft.  I do love hard and very hard, which I would describe to a Western audience as al dente.  To complete the stock and noodles, the standard bowl of ramen comes with spring onions (葱), cha shu (ちゃしゅ),  seaweed (海苔) and bamboo shoots (筍).  This time I opted for extra cha shu and egg to re-live my dreams of ramen.  In another Japanese touch, you can also ask for additional noodles to top up the bowl if you want (替え玉).  I skipped on this as I was busy drinking all the soup.

The tonkotsu (豚骨) was rich and creamy. Managing to somehow avoid being too thick or watery, it was instead in the happy medium.  The accompaniments were also very welcome, pickled ginger and freshly ground sesame seeds.  I think that this last touch was what transported me back to my heady days in Tokyo slurping down delicious ramen with all the extra trimmings.  Through my time at Kanada-Ya, I almost thought I was back in Tokyo.  It was a bit of a rude awakening after living in my dream when I stepped out back into dreary London and right onto some gum on the pavement. People would be shot for leaving something like that behind in Tokyo.

Kanada-Ya is dangerous.  Very dangerous as it makes me reminisce of my days in Tokyo and my resulting neglect of my surroundings led to a sticky unwelcome surprise.  I think I have found what should be at the forefront of my line up to be my go to ramen joint in London.  Until next time (御馳走様でした)!

This bowl of ramen was GBP 15.5 with all the toppings excluding drinks and service.