I know that some people seem to (mistakenly) have the view of me as being only interested in pretentious food.  While I do enjoy fine dining, that doesn’t stop me from venturing into other environments in search of quiet eating.  After all, in Japan, some of the best ramen I had was in run down little shacks.  So in search of good food I allowed myself to be persuaded by my friends to venture into deep dark Bermondsey in search of food.  Jose.  Down Bermondsey Street we braved the dark tunnel under the railway tracks in search of food.  I did think at the start that this seemed like the entry to a pig’s sty, a dark and long tunnel.  Which was apt, as we were to spend quite a while in piggy heaven.  Well actually, I imagine that is inaccurate because in the pork chop afterlife, I imagine that pork would be a banned substance. 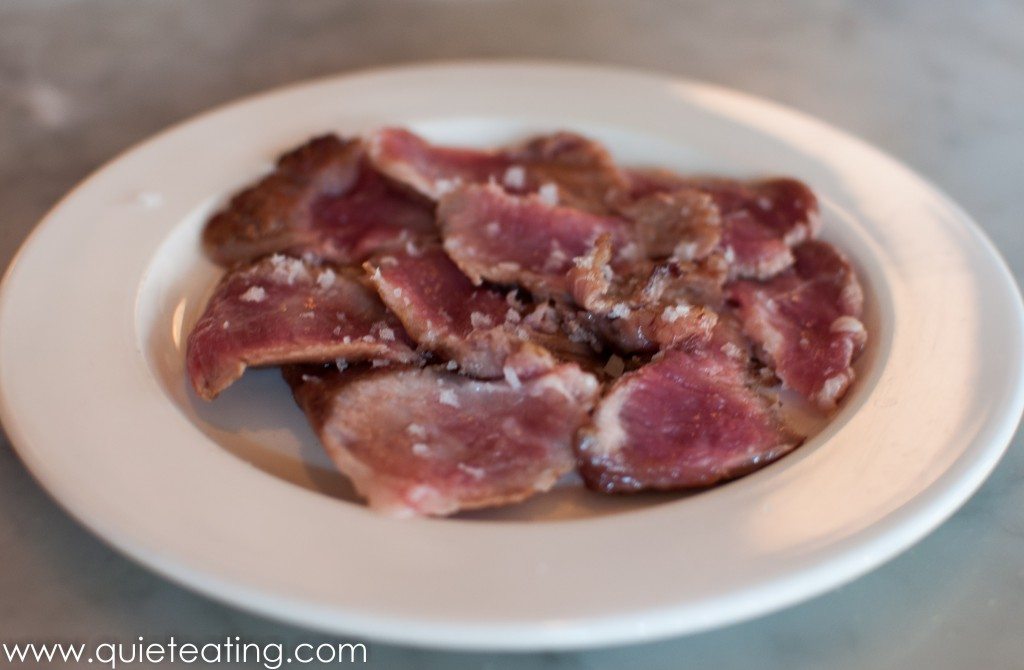 Jose serves tapas, so lots of little dishes for sharing.  Similar to dim sum in a way.  First up, pork fillet lightly salted and just very lightly cooked.  A very pleasant lighter porky taste as compared to the jamon.  I actually think I preferred this lighter taste to the cured hams. 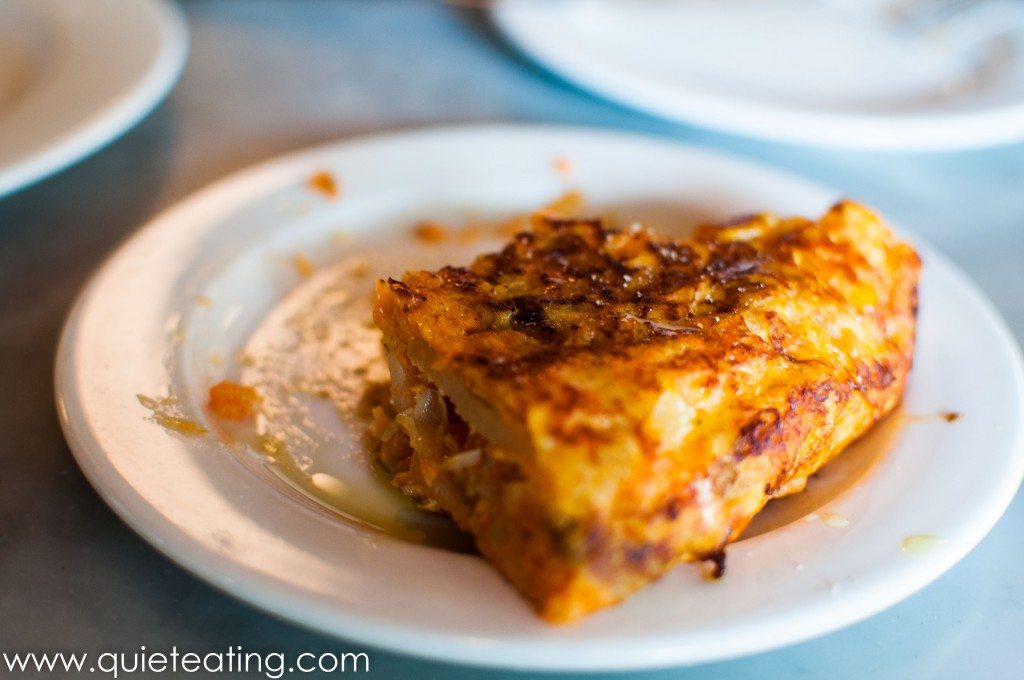 Tortilla.  Well cooked with who would have guessed it, a pork filling!  Which was well complemented by the egg. 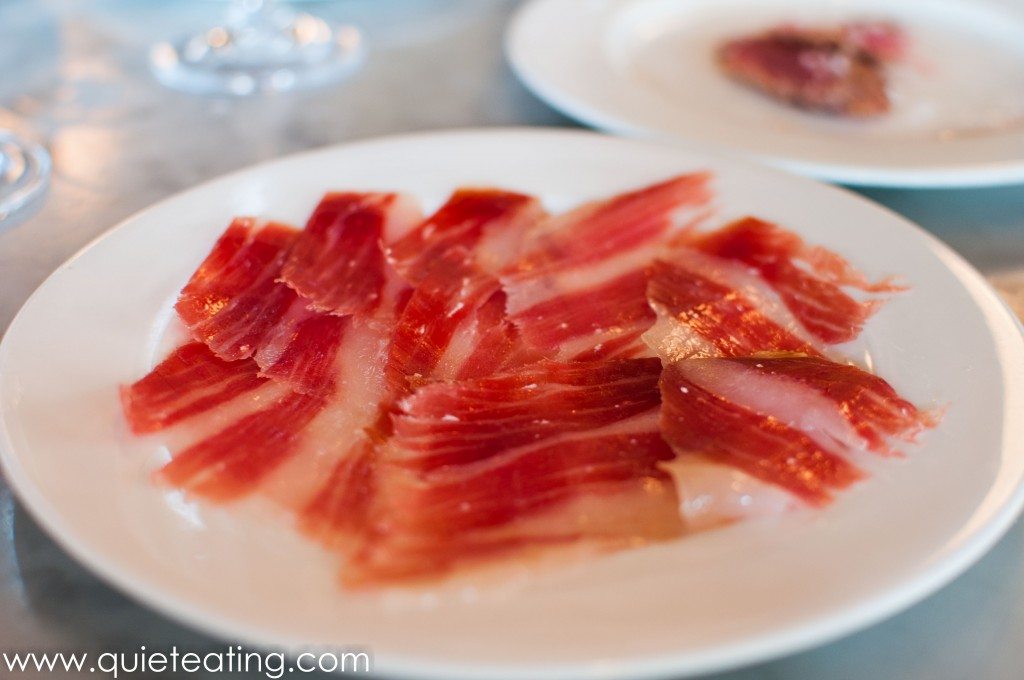 Now for the main dish itself, jamon.  Surprisingly, I actually found that its taste was fairly light compared to other jamon I have had.  So it was slightly disappointing for me.  Missing that strong porky taste I was used to. 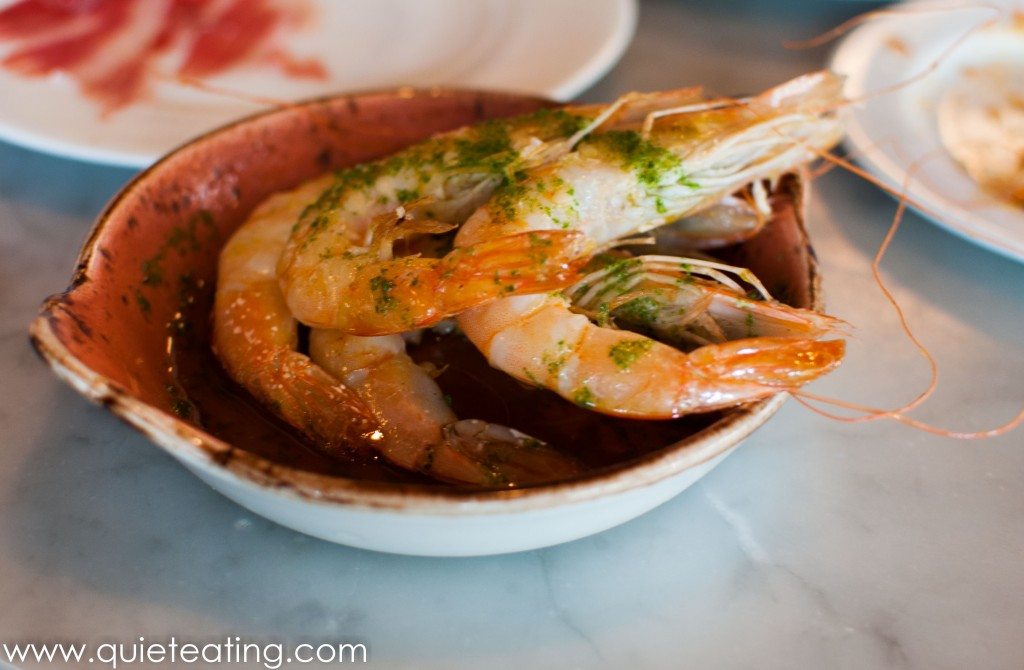 Prawns with pesto.  I did enjoy this and when we were all done, we were all so sad that we had to order another. 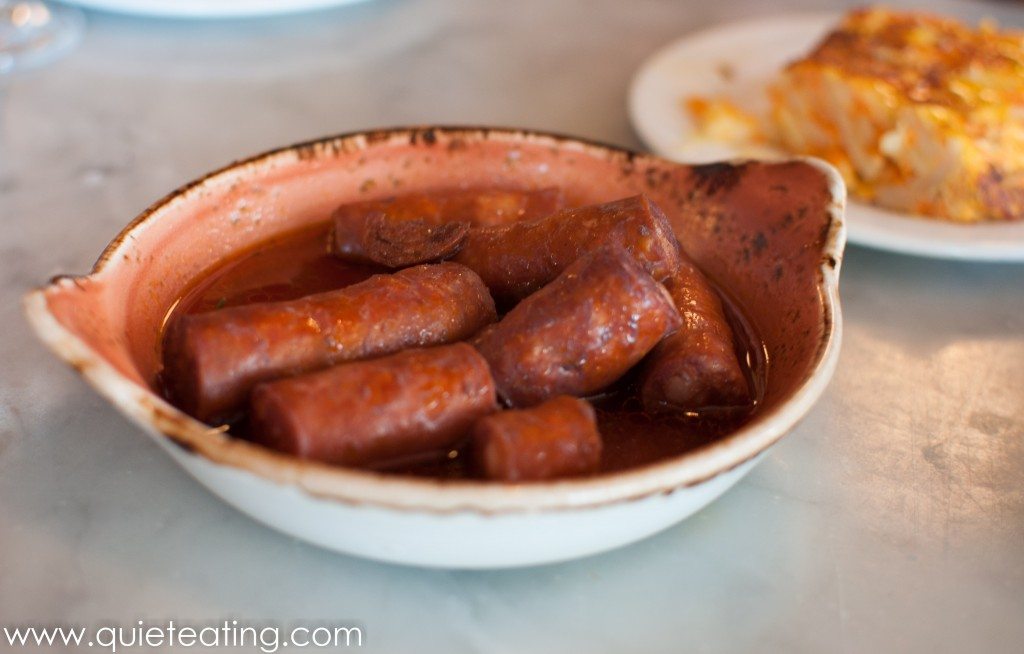 Chorizo.  Pork in another guise.  Stuffed and cooked into a sausage.  Disappointingly it seemed to be missing a small small element, a strong taste of pig! 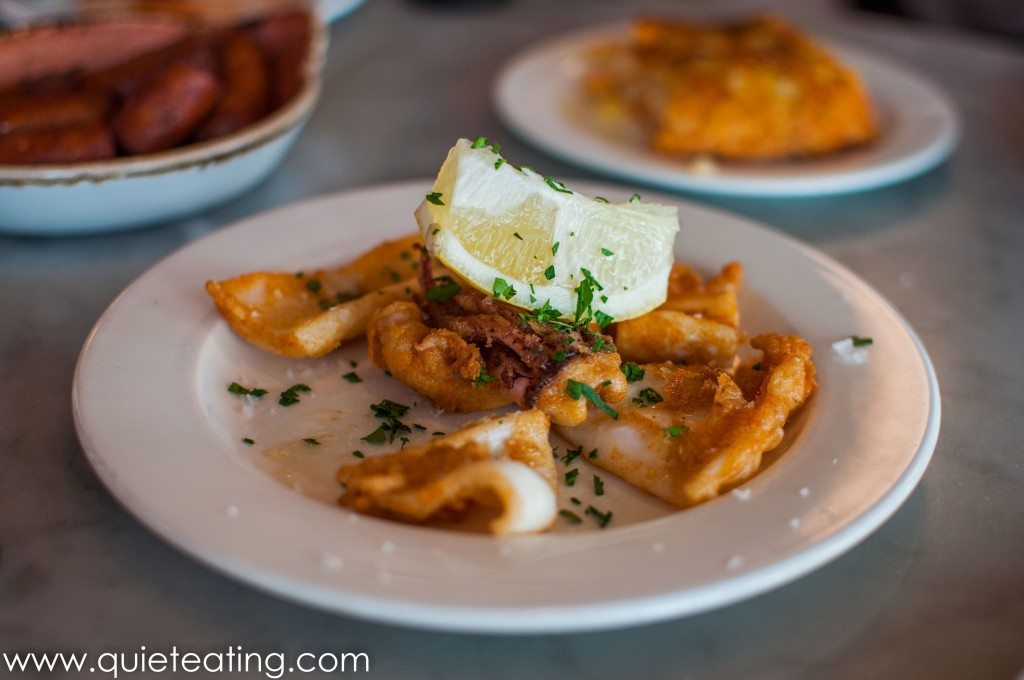 Fried calamari.  Crispy and fresh avoiding the rubberiness when it is overcooked, as it is done in other places I have been. 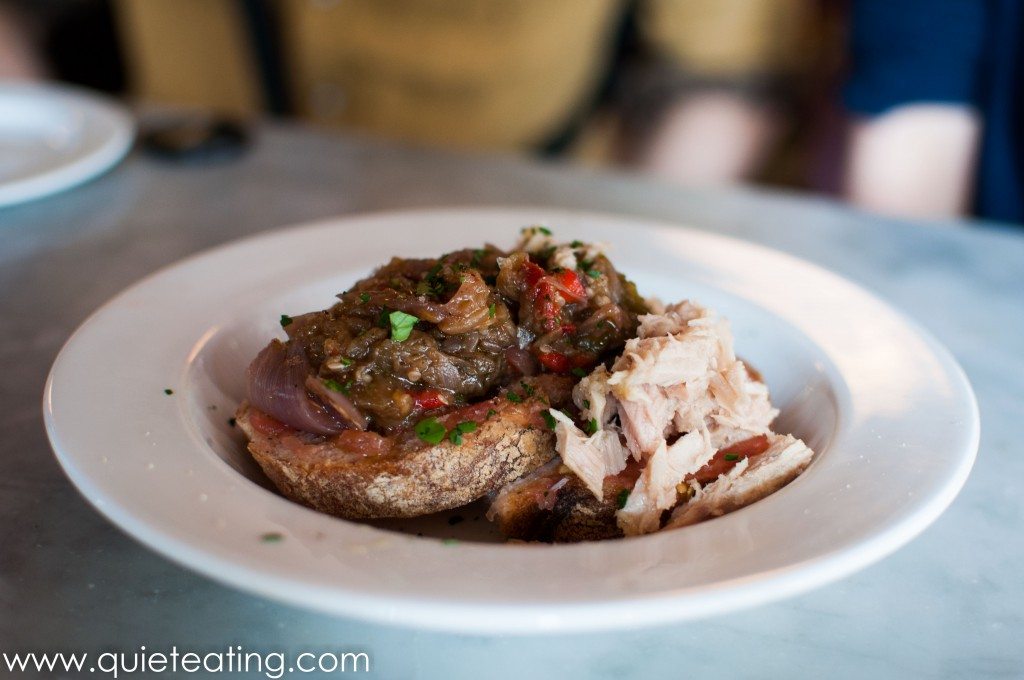 Tuna and eggplant on bread.  I found the tuna to be a bit a plain but found the eggplant to make up for the blandness of the tuna. 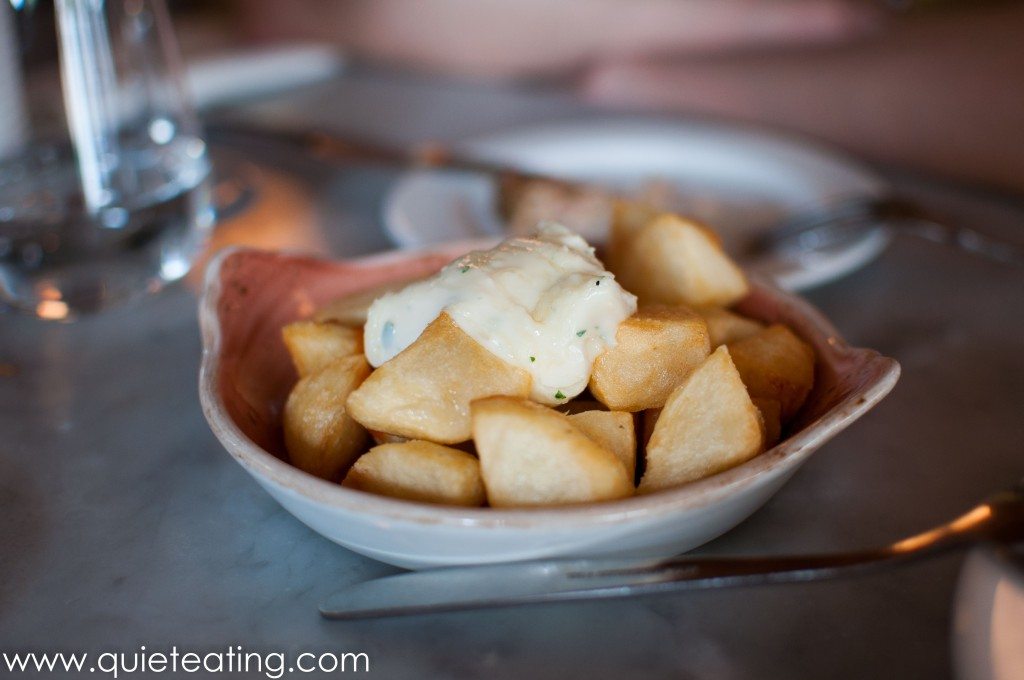 Fried potatoes.  The star dish of the day.  Lightly fried and served with a mayonnaise-like sauce with chives. I found this dish in particular to be very satisfying.  Maybe they imported the potatoes from Spain?  I don’t remember British spuds being so good. 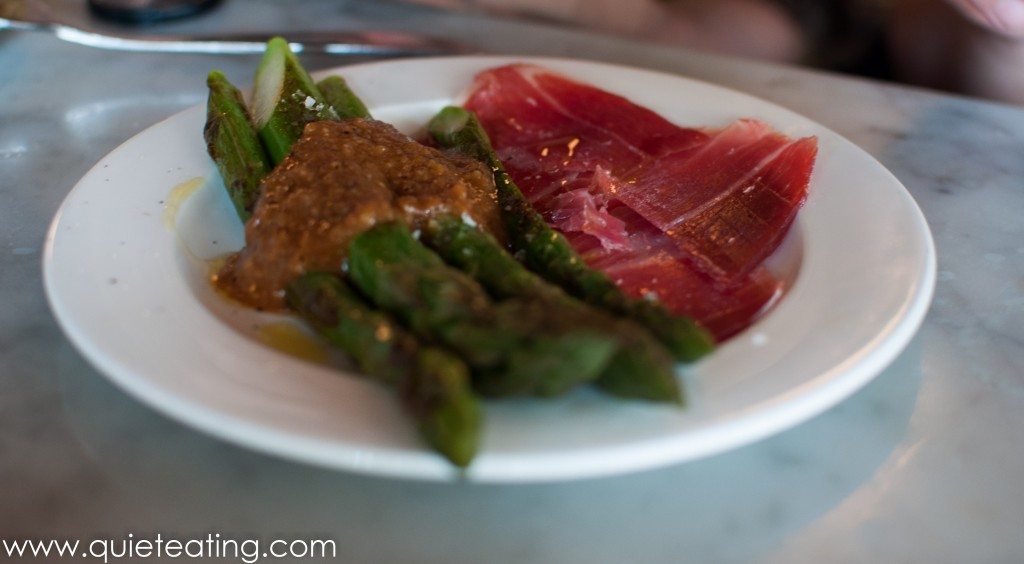 Asparagus and jamon.  I did enjoy the asparagus but found the jamon rather ordinary in keeping with the other pork dishes. 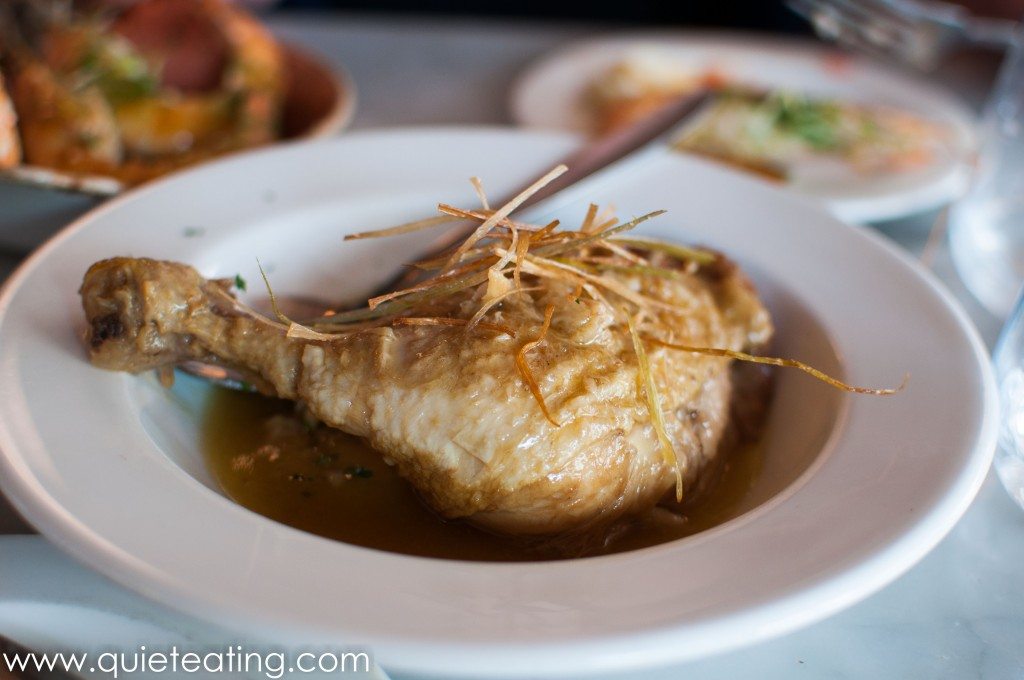 Chicken.  Nicely cooked so the meat fell of the bone in a light sauce (sorry I was unable to identify this) it was again a bit bland, at least to me. 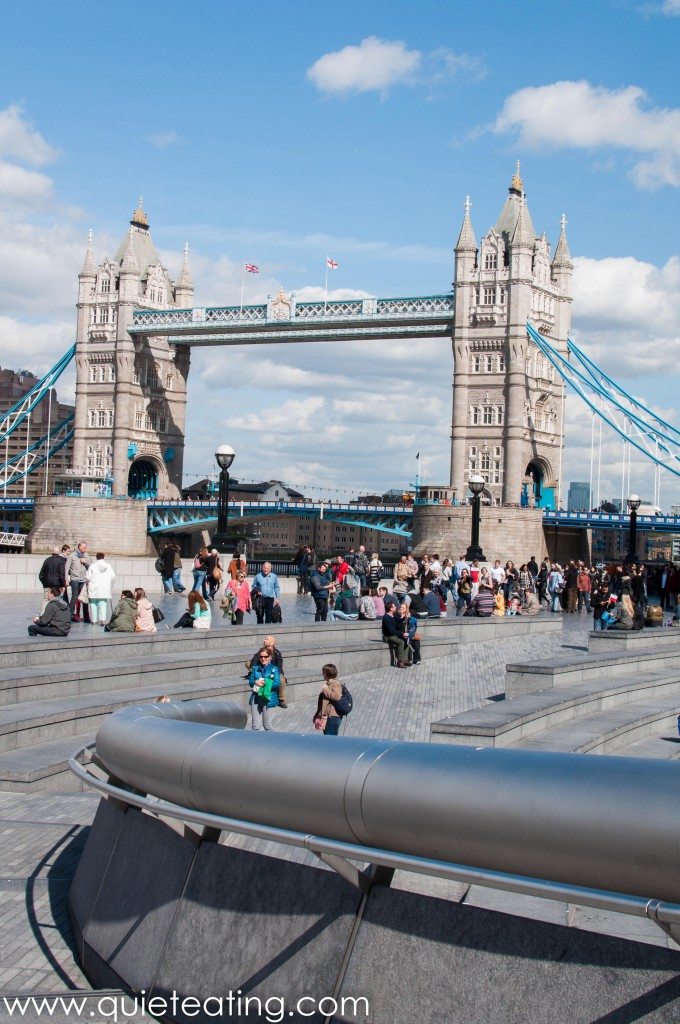 After lunch we then headed over to nearby Tower Bridge to reflect on lunch.  Well at least this is what I pretended to do.  Jose was an enjoyable experience but not something that I would think about repeating.  There is just too much to eat in London to justify a re-visit to a slightly better than average restaurant.  Although I had preconceptions of enjoying fine pork dishes, in particular the jamon, these were to prove a little bit too bland for my tastes.  Instead, I found the seafood and interestingly in particular, the potato to be outstanding.  Maybe worth a visit just to try.