I admit to being very curious about Michelin starred Chinese food.  Hailing from that region of the world myself, I had always thought that this type of cuisine did not lend itself to the white table cloth and individually prepared dishes of the usual starred cuisine.  This doesn’t mean that it doesn’t exist though as in London, there are four such starred Chinese eateries. Yauatcha, Hakkasan, Kai and HKK.  I have yet to try any until today.  So naturally with the weightier price tag which a star grants I would be looking for something special and different to distinguish itself from my favourite Chinese restaurant, Gold mine.

So this is how I ended up at HKK.  To satisfy my curiosity.  Hopefully curiosity won’t kill the cat in this case.

As this is a Chinese restaurant, I will have to content myself with talking about the setting instead of the bread.  Although I thought that a Chinese restaurant wouldn’t serve bread, I did entertain hopes of a mantou, or Chinese steamed bread.  No such luck in this case. 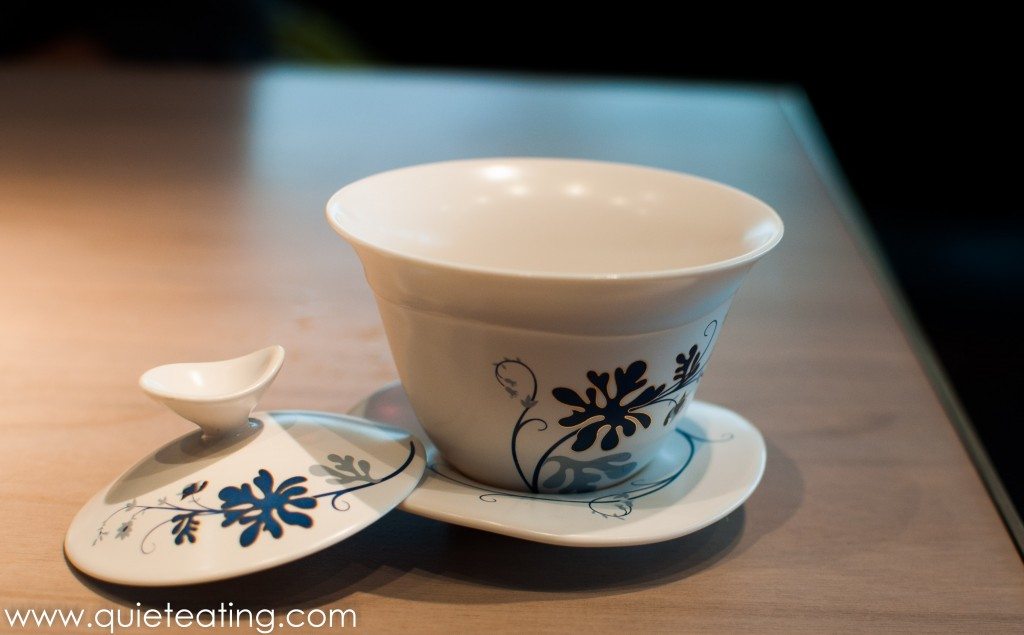 So, in a break to our usual programming, I will skip talking about the bread and instead focus on the cups.  I admit to being impressed by this tea cup.  I do love a nice bit of China being a bit of a collector myself.  I applaud their taste in crockery.  Although at this stage, I did try to have a tentative bite at my cup to check that it wasn’t an elaborately disguised piece of bread. 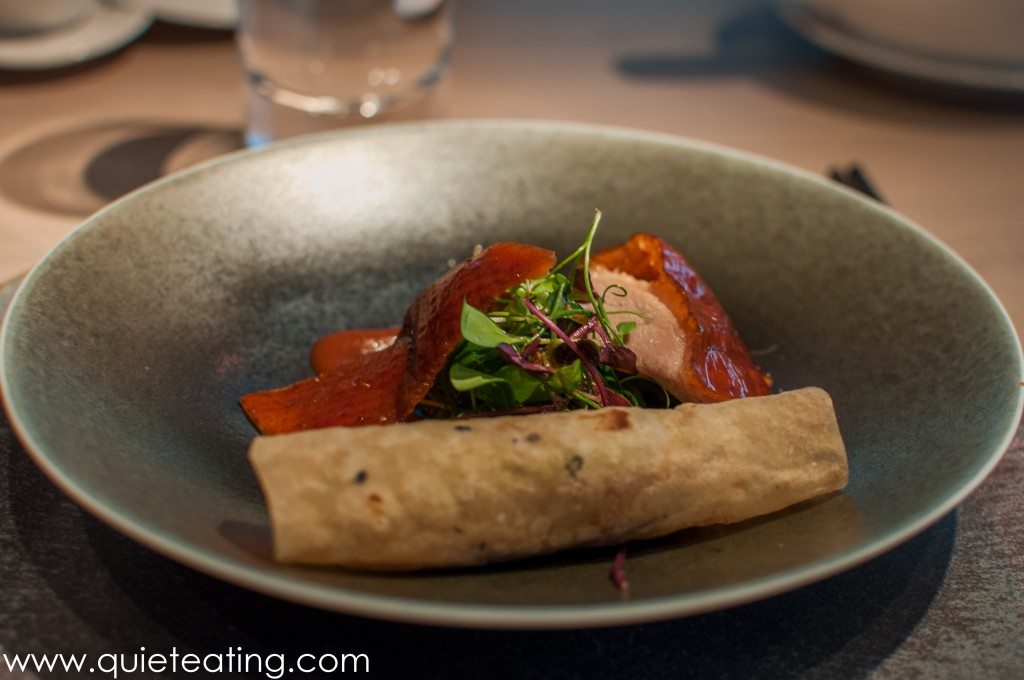 Before I could explore the taste of the cup, the starter, an artfully arranged Peking duck, arrived.  To explain, Peking duck is duck which is roasted in a way to deliver crispy skin.  As I understand it is by literally making a fat duck.  Pumping the poultry with air so that the skin attains a crispy succulent texture.  It is then served wrapped up in a small pancake.  In this case, it was pre-rolled for us (can’t have your guests getting their hands dirty in fine dining!) which is a bit different from my usual messier (although fun) method of preparing my food.  When I usually eat this, I tend to get my hands oily and build my own wrap just the way I like it.  Although I was robbed of my greasy fun, this more sanitary arrangement made it easier to keep the oil off my camera.  That has to score some points, which combined with the taste led me to expect good things from the rest of the meal. 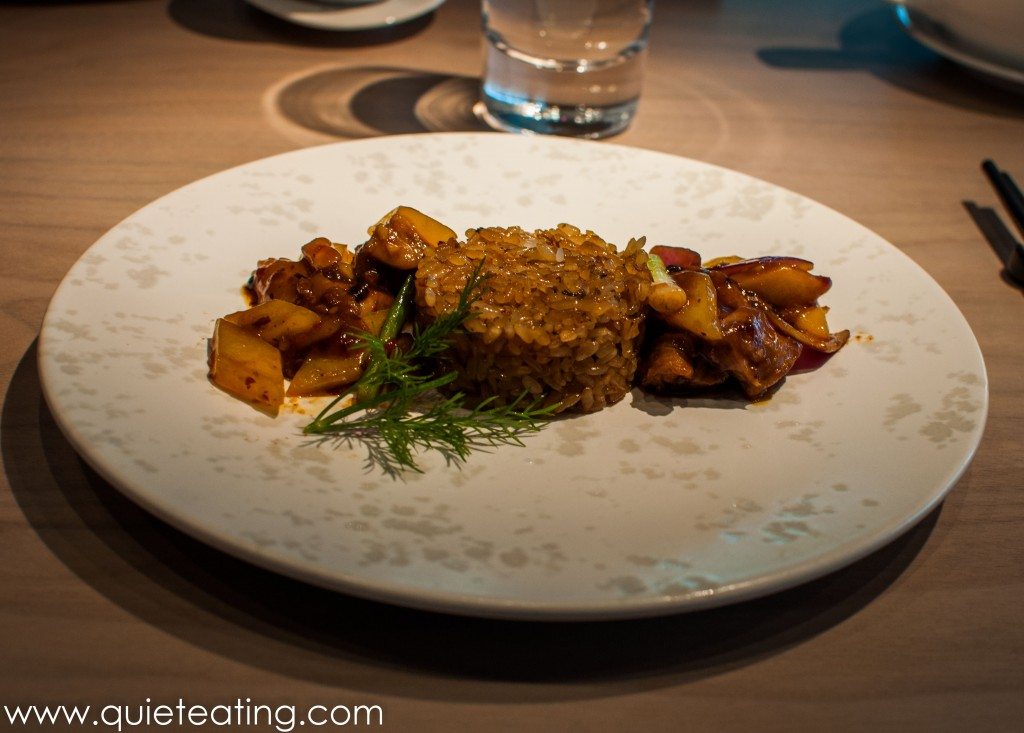 Along came the main, duck in black bean sauce with glutinous rice.  The presentation was again excellent and I have to compliment the chef on the rice, with each grain “standing up” and maintaining its structural integrity despite a glazing of sweet sauce.   I cannot fault the taste but the issue I found was that it left me expecting more.  I briefly entertained thoughts of pulling my best impersonation of Oliver Twist and asking for some more.  Although at this point, I found the absence of bread particularly noticeable but as I was with some guests I had just met several minutes before, I decided that I would try not to weird them out. 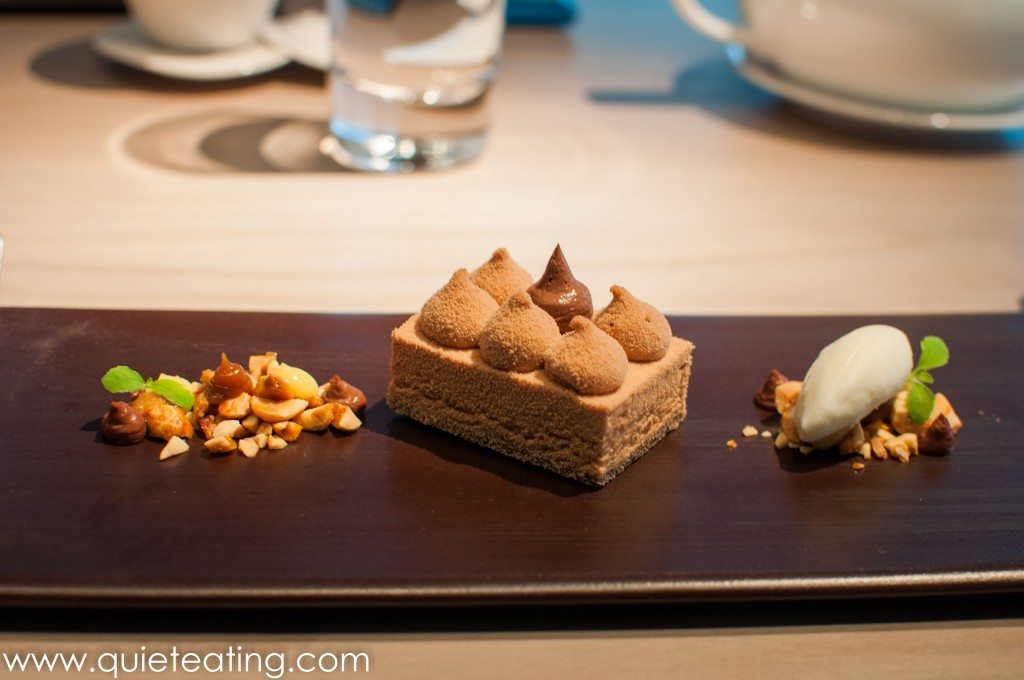 Peanut parfait with lime milk.  A well done dish, I particularly enjoyed the parfait.  It achieved the pleasing consistency of being just firm enough to hold its shape and soft enough to dissolve in your mouth.  Although I searched high and low, I found it difficult to find any link to Chinese cuisine in this dish.  I guess this is where the fusion comes in.

HKK was an enjoyable encounter although perhaps better suited to those with small appetites.  There was nothing wrong with the food, indeed I would say that it is slightly above average compared to other similar fancier Chinese restaurants.  However, I find it difficult to justify its significantly higher price for food which is very familiar to me.  Maybe better suited to a Caucasian audience.

Lunch (3 courses) was GBP35 including jasmine tea and a non-alcoholic drink, but excluding service.