So on one of the coldest days of the year so far, we decided to go to a prosperous restaurant to warm our tummies and wallets.  As you may know, Chinese people are very superstitious and place great import on good omens. 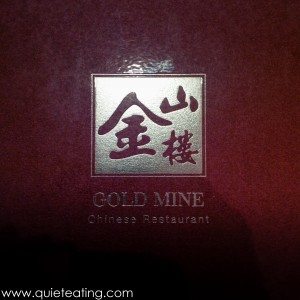 Although the name of the place is Gold Mine, we did not manage to fill ourselves with the usual riches associated with the name (ie gold, money) but instead managed to gorge ourselves on more savory delights.

I blame the cold weather for the demise of my camera which I had carted on the arduous journey from home just to take photos for my blog entry.  When I proudly took it out to use, I was dismayed to find that the battery seemed to have been drained, much to the amusement of my fellow diners.  Even though I was sure that I had checked it before.  Hardly an auspicious start to the meal.  All the photos are taken with my dinky camera phone.  You’ll have to make do, sorry! 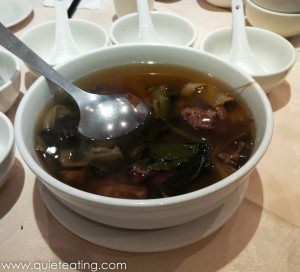 Due to a bit of sweet talking, by one of our party who was a regular at the restaurant, we managed to secure some complimentary soup to start off the meal. Pork-based with Chinese vegetables.  A nice light and warming start to the meal.

But as my stomach was soon to declare in a loud rumbling, it was not happy with aforementioned taster and required something more substantial to sate it. 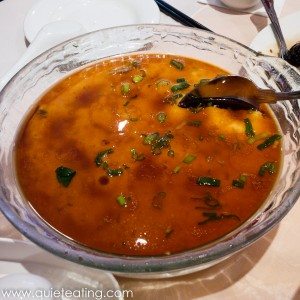 Three colour steamed egg.  Salted duck egg, century egg and normal egg.  Well suited to the restaurant, and if you have watched (or read) Lord of the Rings, you know that the answer to Gollum’s riddle of “a box without hinges, key or lid, yet golden treasures inside is hid” is, you guessed it, an egg!  Surely something in keeping with the theme of Gold Mine.  Light and tasty.  An excellent source of protein! 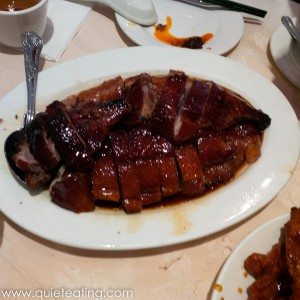 To complement this dish, was the duck who laid the egg.  Mummy was very tasty too.  Although, probably wisely putting on a substantial layer of fat in preparation for the English winter.  A signature dish of Goldmine, this duck was succulent and bursting with flavour.  Although, as one of my fellow diners remarked, had the added bit of excitement of Russian roulette.  Although in this case, we were not playing with a loaded revolver with 5 blanks and 1 live round, the “live rounds” in this case, were the unfortunate pieces of duck which consisted of skin and fat.  Not my cup of tea.  The “good pieces” lived up to the usual standard of providing a meaty punch to the meal. 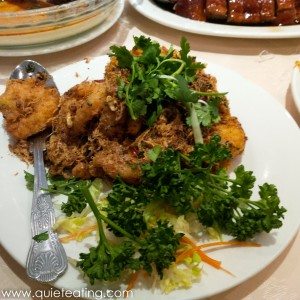 Cereal prawns.  I never managed to understand why it was given such an ” interesting” name.  I had often tried to look high and low to identify any cornflakes in said dish.  Apparently what you are not supposed to do is dip the prawns in your morning porridge and fry it.  That would make for an interesting, but fatal result (at least to your cooking reputation, if not to your person).  The best way to understand cereal prawns to those uninitiated to the intricacies of Singapore cuisine (where the dish originated) is breadcrumb coated prawns.  Now, that should be easy enough to understand in the land of fish and chips, where you can smear almost anything in breadcrumbs and deep fry it to create a new dish.  Although, I could have done without the deep fried mars bar.  Enough fat there to lead to an instant coronary.

These cereal prawns proved to be light and crunchy.  No mean feat in soggy London.  Luckily it wasn’t raining today. 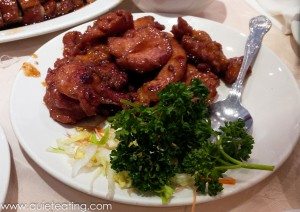 Honey pork chops.  The mixture of the sweetness and meatiness in this dish provided an interesting, but pleasant counterpoint.  It was quickly devoured by my fellow diners, so I had to take advantage of their momentary distraction to help “deal”  with the cereal prawns. 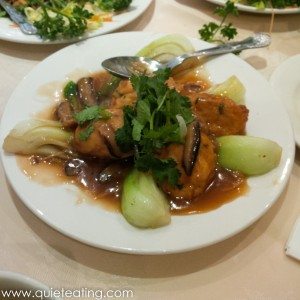 Stuffed tofu with seafood (‘Pi pa tofu’).  The sole concession to vegetables.  Look at the greenery!  And those yellow parcels are tofu stuffed with minced seafood.  Decent but unfortunately not up to their usual standard.  It seemed a bit bland today.

All of the above was washed down by plain, but good, white rice and jasmine tea.

If you have a yearning for simple and good Cantonese food, a visit to Bayswater cannot miss the mark.  Although the ambience is similar to many Chinese restaurants found in London, a bit cramped and noisy, the food is uncomplicated and homely.  The price is also very reasonable.  The meal came up to less than £15 a head.  As my go to restaurant for Cantonese home cooking, I would unreservedly recommend it, even though it sometimes has its off days for some dishes, the “sifting” in the Gold Mine arguably just adds to the charm.  Just don’t bring your pet dog, you know what they say about Chinese people and their dogs, you might find Fido was part of the stew.

In case you are wondering, I am Chinese too so think I am entitled to make that joke!

Dinner (many courses) was about GBP15 excluding drinks and service.

2 thoughts on “Gold Mine”