There seems to be a multitude of options if you have a hankering for a burger in London.  There is Honest Burger, Bleecker Burger, Patty & Bun, Burger & Lobster, Five Guys and of course McDonalds.  Sorry, I meant Shake Shack.  As with this generation of YOLO (you only live once) citizens, it seems that they need to try just about everything.

Which isn’t a bad thing.  It helps to create some spice to life.  Sometimes you get good, sometimes you get bad and sometimes you get the mediocre middle.  Perspective is everything.  So this is how one day when I was enjoying another burger, the other diner remarked that they knew a place which was the best in London.  Naturally, I was all ears.  Wouldn’t want to miss out on that chance.

The name of this secret slice of heaven is Haché.  Now, there are many branches of Haché around London but it seemed only fitting that I visit one located in trendy, hipster Shoreditch.  Generally things might taste better in their natural element.  Hipsters would of course have their burgers done to snazzy perfection.  Well, even if it wasn’t, it would look the part. 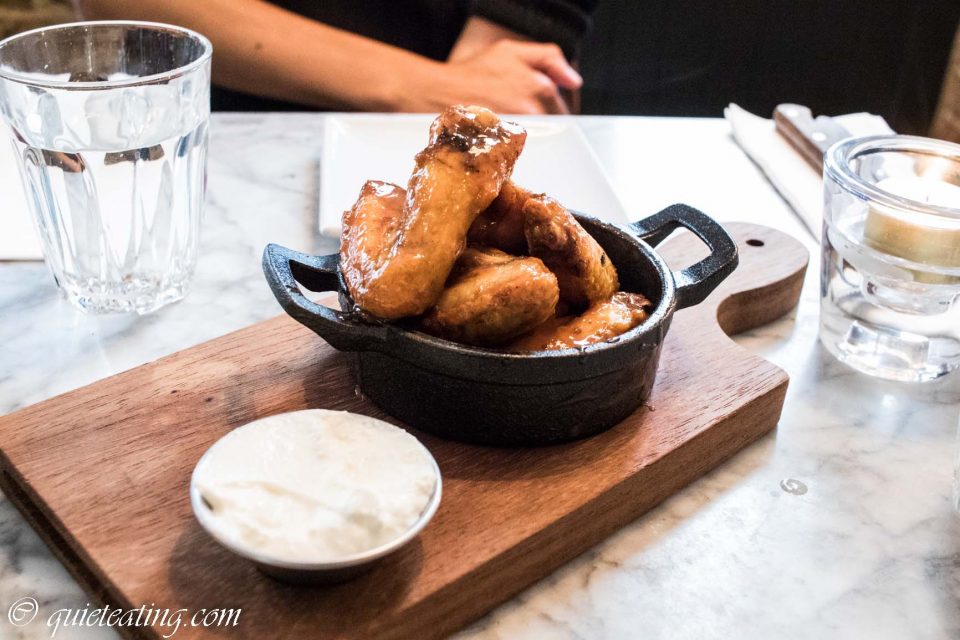 Creole chicken wings, dipped in a hot Cayenne sauce with sour cream.  Served on a befittingly trendy board, in a cast iron pot, they looked like they were trying too hard.  Actually, they need not have done themselves up so much as the test was all in the tasting.  Which they passed with flying colours.  The sour cream and Creole wings combined to make something much greater than its parts, a great wing.  Not something I had been expecting at a burger place.  I guess it compensated somewhat for what was to follow. 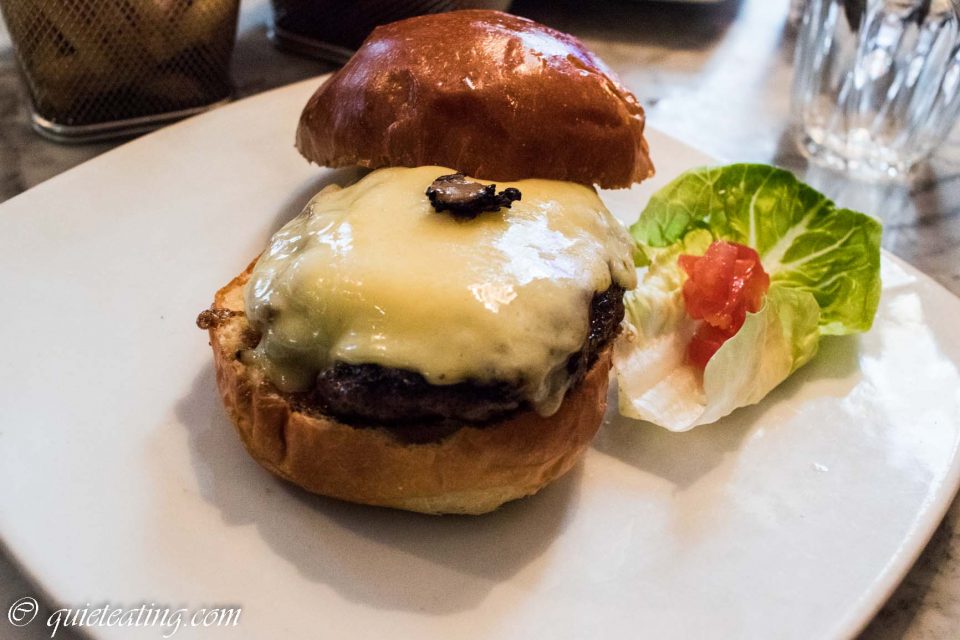 Steak truffle, topped with truffle shavings, truffle aioli, caramelized onions and Gruyere cheese.  Although, I am normally a suspicious man, this time my hunger for truffles got the best of me.  Perhaps haunted by dreams of the ephemeral truffle from Kitchen Table, I was suckered by words of this delicacy.  Mislead by the magical mushroom, I had to pretend that I wasn’t eating a dry, overdone and disappointing meat patty.  Even with the cheese trying to set things right, it was too little, too late. It couldn’t distract from the truffle slops lathered over the beef mince.  A poor show. 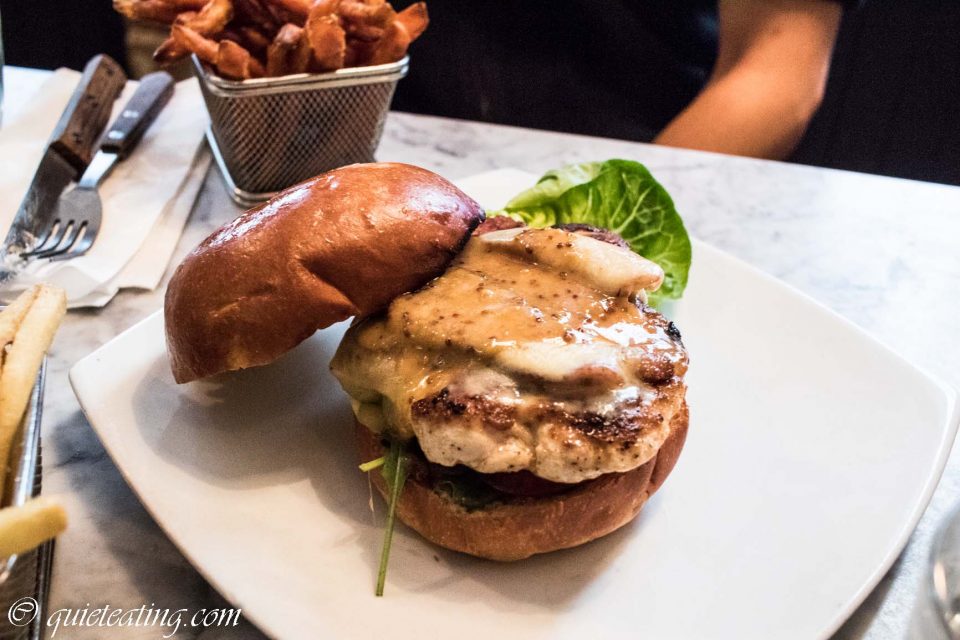 Honey mustard chicken, smoked bacon and melted mature Cheddar cheese, topped with Haché honey-mustard sauce.  At least this was not posing as an impostor dish.  The chicken was as I expected, rather bland leaving the bacon and mustard to try and better this lack.  Unfortunately, success eluded them as together they didn’t really succeed but they should be awarded an “A” for effort.  Try as they might, they were not enough to overcome the dry and bland chicken breast. 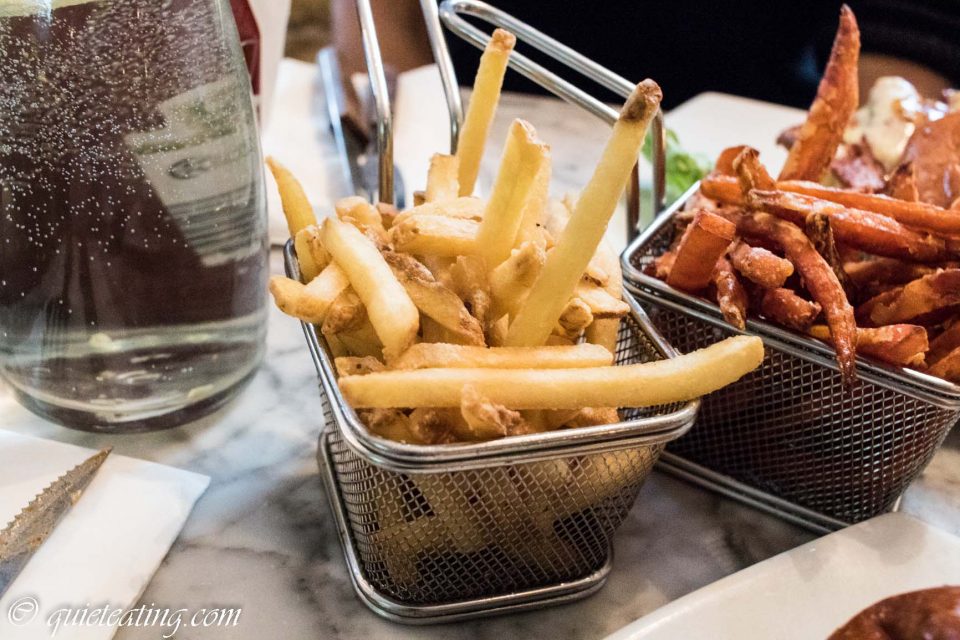 Haché frites.  I have no idea why these were not called what they are.  Po-ta-to fries.  Probably an attempt to distract from the fact that they were rather ordinary.  Although there are worse things to call your fries, like home made, hand chipped and my personal favourite – authentic – then have them turn out rather lackluster. 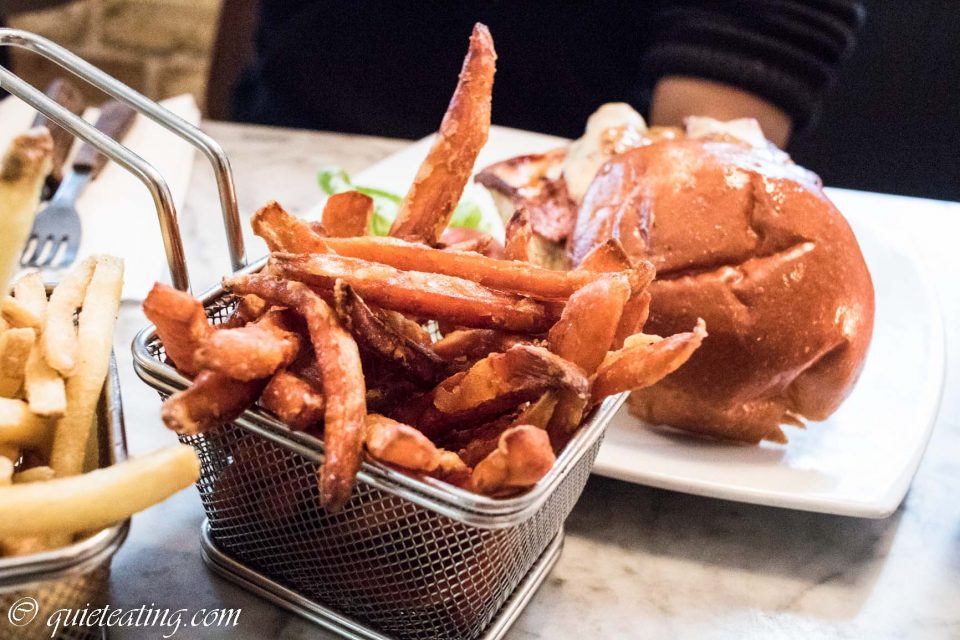 Sweet potato frites.  Something a bit different here.  With a more full flavour that ordinary fries, these were not bad.  Compared to its brother, it was outstanding.  Such are the benefits of relativism.

I had heard many good things about Haché, especially how the burgers were simply to die for.  Much like politicians’ manifestos, the menu promised much, delivered little.  So even in these days of fast food dressed up nicely, there are some things which cannot be disguised.  Add a couple of extra exotic sounding garnishes, branded plates and shiny utensils and they can charge multiples of the more visionary entries into this market.  Or so that is how I think McDonalds was viewed several decades ago.  Yet, they seemed to have made a small miscalculation.  A chimp dressed up in a suit isn’t a human – or should I say a rather ordinary beef patty dressed in exotic sounding toppings is still sadly mundane.  However, trying to look on things in a more optimistic light, at least the wings were good.

Dinner (burger and fries) was GBP17 excluding drinks and service.