Peruvian restaurants in London have been increasing in number in recent times – and now cover the whole range from pretty high end stuff like Coya to the cheap and cheerful Emanuel near Elephant and Castle. Now, a restaurant serving food from neighbouring Ecuador has made its way to London and it seemed a good idea to check it out given the success of its Peruvian neighbours.

Tostado bills itself as ‘an intimate little Ecuadorian ceviche and soup bar’ – and cosy it is indeed, with about 20 seats in a pretty small rustic wood-effect room. And they have also squeezed a bar into there.

With that description, logically, we tried both a soup and a ceviche – it seemed like a sensible idea at any rate… 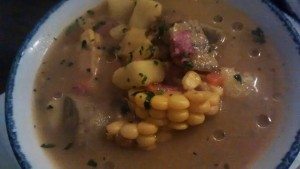 Sancocho Soup with Beef, Corn, Yuca and Plantain @£5.50
On a winter’s night, the soup was warm and comforting with chunky vegetables and a flavourful stock – just the right thing after stepping out of the cold, wet weather. 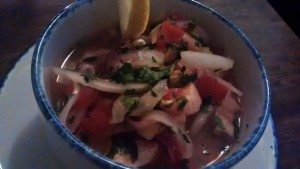 Salmon ceviche in pepper sauce, citrus and onions @£9
The ceviche – touted as ‘THE Ecuadorian hangover cure’ – (although we have yet to try it in that context yet) – was served in a citrus marinade with toasted corn kernels (the ‘tostado’ of the restaurant’s name). It was actually quite lemony (more so than some of the other versions in London) but pretty decent nonetheless, with the toasted corn adding crunch to the dish. 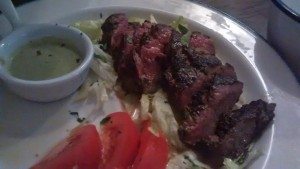 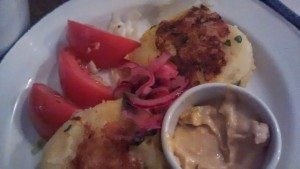 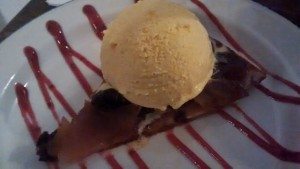 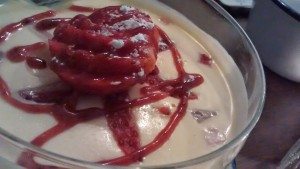 Pineapple flan
To finish, we had an apple tart and pineapple flan @5.50 each – neither of which were on the menu – both of which were surprisingly among the high points of the evening. They were simple and hit the spot quite well.

Overall, the food in Tostado most reminded us of someone’s (very good) home cooking (the owner’s 90 year old mum’s recipes going by the website promo). It definitely makes a welcome addition to the food scene in central London, expanding the number of South American countries represented among restaurants here.