Naming your restaurant after a type of building was an interesting choice.  It could result in restaurants named skyscraper.  Fat, concrete block with windows.  Or perhaps, German Gymnasium.

My impression of German food is that is it is straightforward, to the point, hearty and unpretentious.  I was not to be disappointed on three of the four elements. 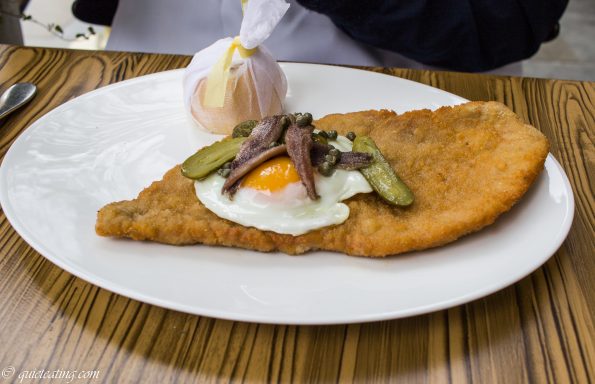 Holstein Schnitzel, veal, fried egg, gherkin, capers & anchovies.  It was not bad but then again not that amazing.  It tasted like a breaded piece of meat.  Nothing particularly exciting.  Simplicity is to be valued when the underlying ingredients can speak for themselves.  Yet, sometimes you need a little bit of transformation to make the food better.  I think that this dish could benefit from some of the latter as this seemed straightforward in a pedestrian kind of way. 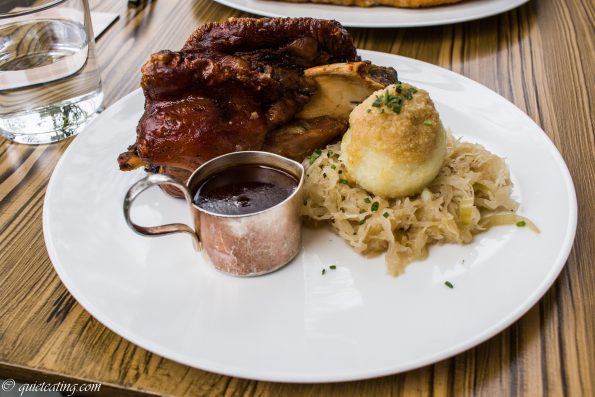 Bayrische Schweinshaze, cured & grilled giant pork knuckle, Sauerkraut, potato dumpling, beer jus.  The potato dumpling was interesting.  I thought it was mashed potato in a ball at first but upon biting in, it had a very interesting bouncing texture.  Rather good kind of like eating a springier (and younger) version of mashed potato.  The sauerkraut was rather mild but a good counterpoint to the strong taste of the knuckle.  The knuckle was meaty, nicely tender and moist yet with crisp top with deep porky goodness.  The beer provided a great compliment to the already fulsome tasting pork.

This was a nice meal out but strangely, service was not up to stereotypical German efficient standards that I would expect from the name of the restaurant.  Instead, it required several abortive attempts to get some attention.  So maybe the owner of this gym instead of encouraging the staff to hit the gymnasium, track and field should be emphasized more.  Hopefully that might lead to speedier service.