As eating out is almost my raison d’etre and when that is taken away an entirely foreseeable issue arises.  No, I don’t swell up as a balloon as I gorge on McDonalds in some misguided teenage rebellion (I would have more class than that, would find something more elaborate to be my poison).  Instead, I become bored.  When I become bored, to alleviate said condition, I sometimes do strange things.  Examples from my past include:

That time I thought it would be fun to see what coal ice cream tasted like.  Won’t be doing that again.

A further sample could be that time I thought it would be fun to ski around in a Picachu onsee.  It was fine until I fell, then I got to experience what a wet and cold pokemon would feel like.

Or perhaps it could be when I decide to venture into a kitchen as a cook rather than a critic.  Some “friends” would insinuate that I should not be providing commentary on culinary arts until I was able to demonstrate my own skills in the arena.  I counter that argument by expanding on how far I go beyond the arm chair critic.  Namely, on occasion, I try (although not always sucessfully).  The only problem is, it is sometimes hard to summon up the requisite motivation at times when I can just hop around the corner for a bite to eat instead of slaving away in the kitchen.

So, perhaps there is a silver lining to the lock down.  I would be motivated (by lack of alternatives) to cook more.  Even better, my food would be judged on appearance rather than taste.  I thought that such superficial judgement calls were similar to meeting people for the first time.  Those snazzy glasses look dashing!  The watch looks sparkly.  The beard looks well groomed.  However, on a closer look, the rumbled jacket doesn’t look that good.  The dirty trainers look kind of bad.  Most of all, pregnancy in a man is not appealing.

So relieved from the requirement to have my food subject to the threat of tasting, I thought to start off small.  Other’s people’s judgement would have to rest solely on how things looked.  Everyone would have to trust me as to how it tasted.  Not to be too ambitious, I thought to start from the end of the meal and slowly work my way up.  The inspiration that lead me to create the below was fairly straight forward.  I had a 1kg tub of peanut butter and was thinking of ways to exhaust it.  Although there are many things that you can make out of peanut butter, I thought to start with the least complicated (and hopefully the most forgiving of error), the humble brownie. 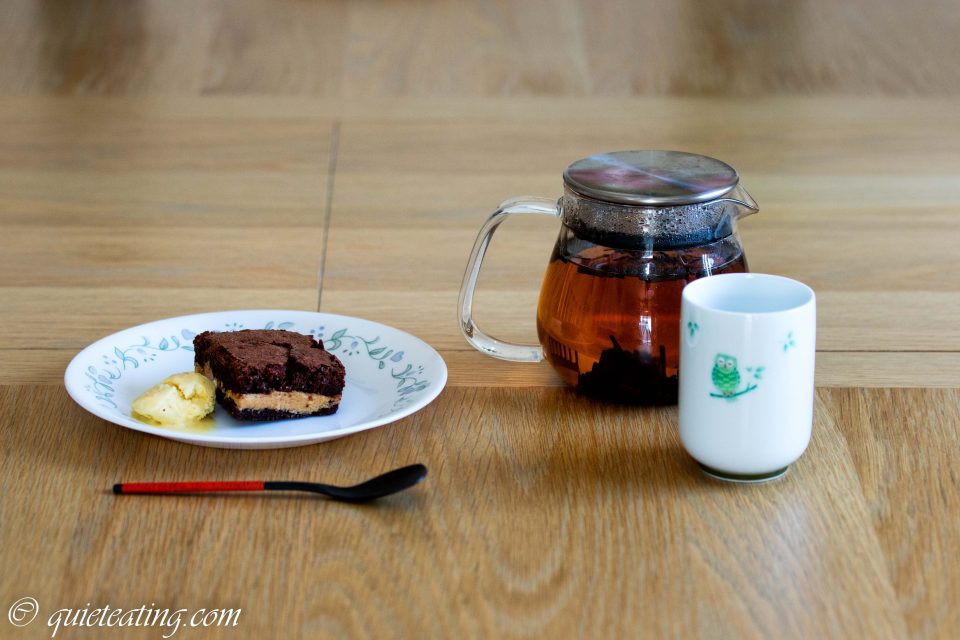 The slightly bitter chocolate crust and cake layer highlighted the sticky sweetness of the peanut butter filling.  Yet the adventure did not end there.  What made the journey in the mouth even more interesting was each spoonful was a bit like playing the lottery – whether you would get a chunk of peanut to elevate the pleasure.  The creamy and smooth ice cream only served to highlight the contrasting sweet, salty, bitter and nutty brownie.  With so many flavours in one, perhaps I should have dressed up my sweet treat in a super hero costume.

On the right, smooth hoji tea direct from Japan.  Hoji cha is a tea which is roasted much longer than green tea and has a strong smoky earthy taste.  Interesting, it has almost no caffeine content making it great for a later day drink.  The smooth heavier taste complimented the brownie rather well.  It was so good a combination that I thought that maybe I should test this out on the wider public.

Perhaps this is another reason for Boris Johnson to let us out.  If he does, I might even send him a brownie in thanks.

I thought about whether I should rate my meal with a quiet eating score. However, I think that would give rise to too many questions about potential conflicts of interest.  Instead, I will just say it was good and leave it at that.