Following our stay in the New Forest, we then decamped, moving over to the Cotswolds.  I thought that we might try a BnB with an attached (and attractive) restaurant.  Better to rest our weary legs after a long day hiking.  Our chosen venue was the Stump.

No, that is not a reference to someone’s height but I would guess the remains of a tree.  At least, that’s what I think the (young as I was informed) owners were aiming for. 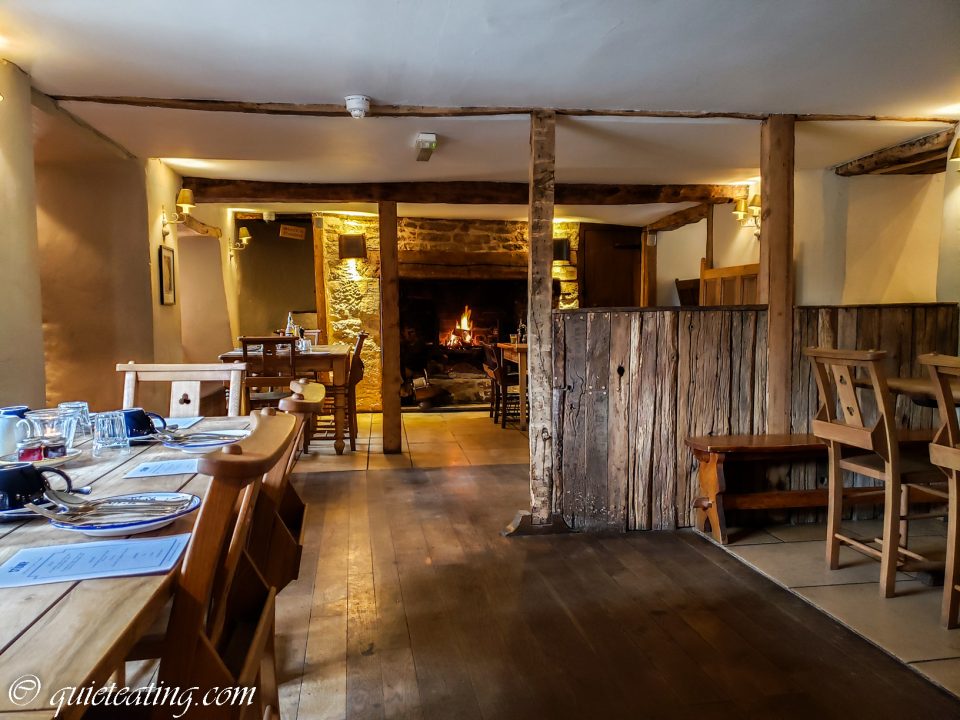 As I was told proudly by one of the waiters, it has only been open for less than a year,  and was a very new establishment. The crackling wood fire in the corner helped to project a rustic and aged atmosphere.  Not shown here were the very comfortable rooms that you could while away the night in.  Yet in order to have a good night”s sleep, I needed a full belly, so this was dinner. 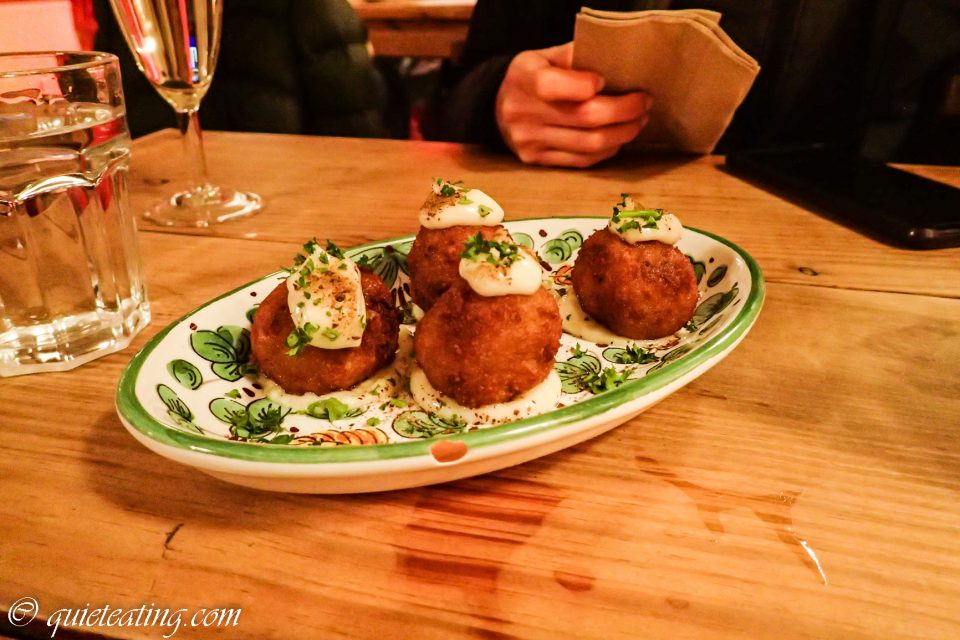 Wild mushroom croquettes with truffle aioli.  A crunchy exterior, great truffle aioli on the side and deliciously meaty mushroom inside.  Excellent. 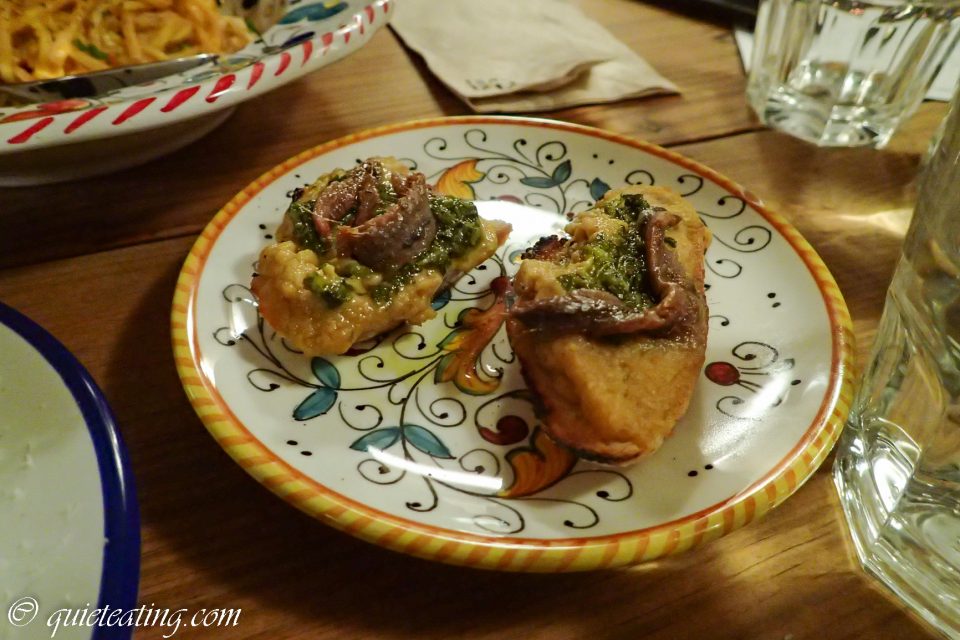 White bean crostini with anchovy and salsa verde.  Interesting, with hard but toasted bread, great beans on top and fish topping it off.  Good. 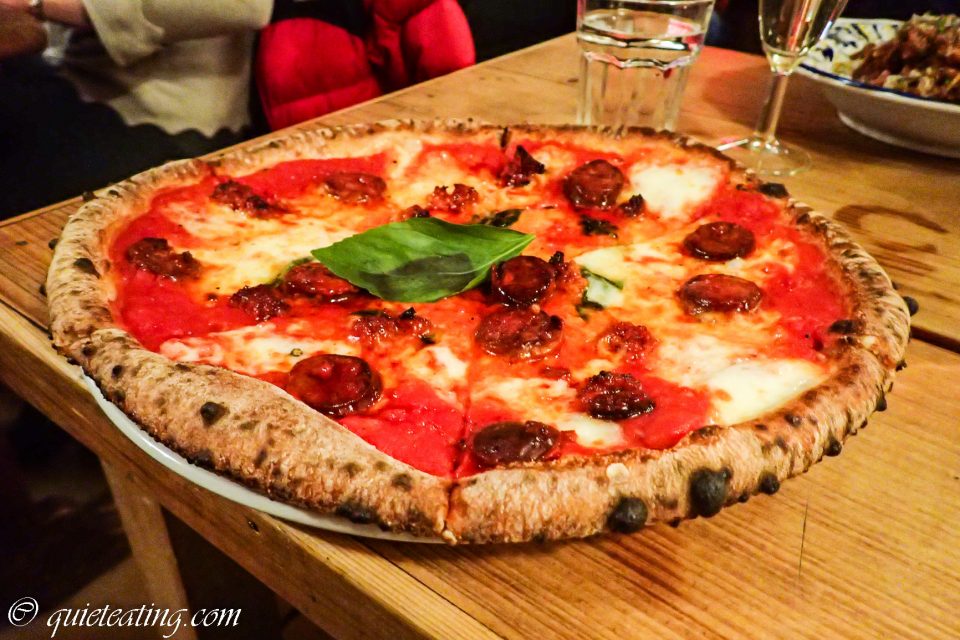 Chorizo and Sobrassada, rosemary honey, tomato and mozzarella.  Not bad, even if I thought the  base was a bit too thin.  This made it a bit of a challenge to get this from plate to mouth and it fell apart.  Although I am all for the recent rush to describe food as “melt in your mouth” when it melts on the plate, that isn’t so good.  Even if you have as big a mouth as me, things can be messy. 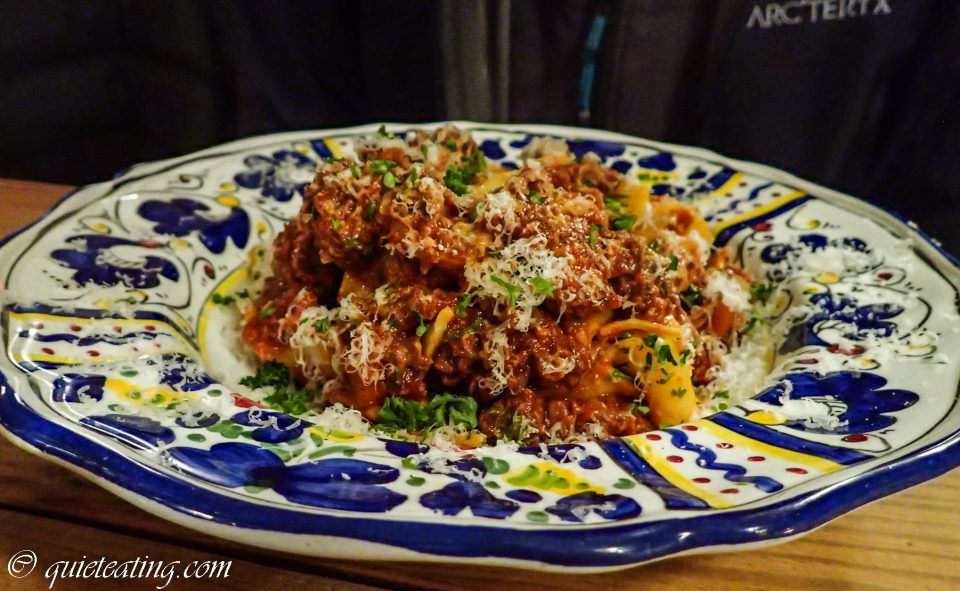 Pappardelle – 8 hour beef shin ragu.  The pasta was rather good.  The beef rich and tasty.  Together, they made something that tasted far better than the otherwise random looking blob above showed. 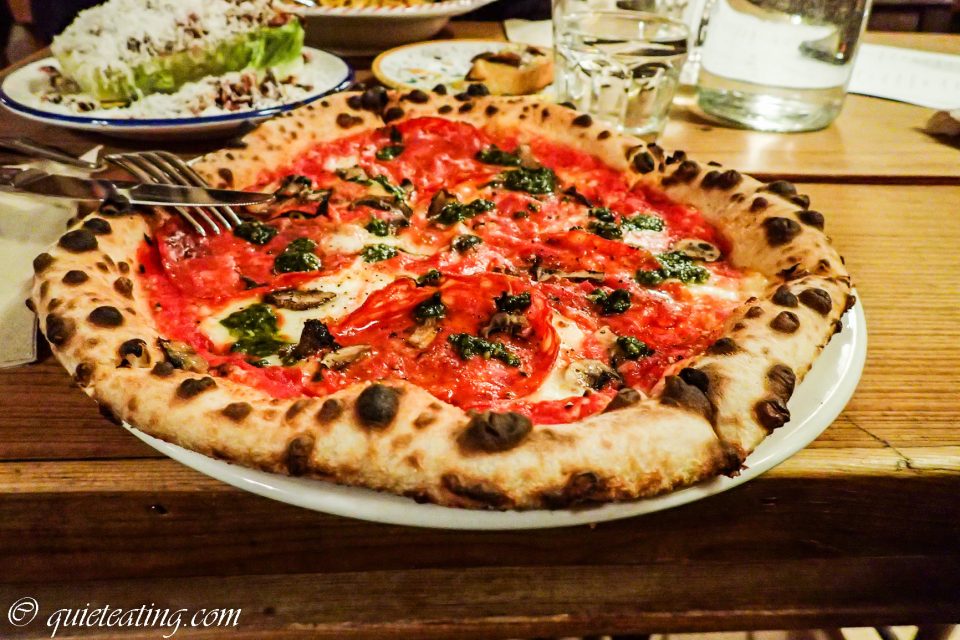 Salami, pesto, chilli flakes, mushrooms, tomato and mozzarella.  Putting to one side the base problem, a spicy pleasant mix on top.  Sadly, tissue paper base isn’t that conducive to dignified eating. 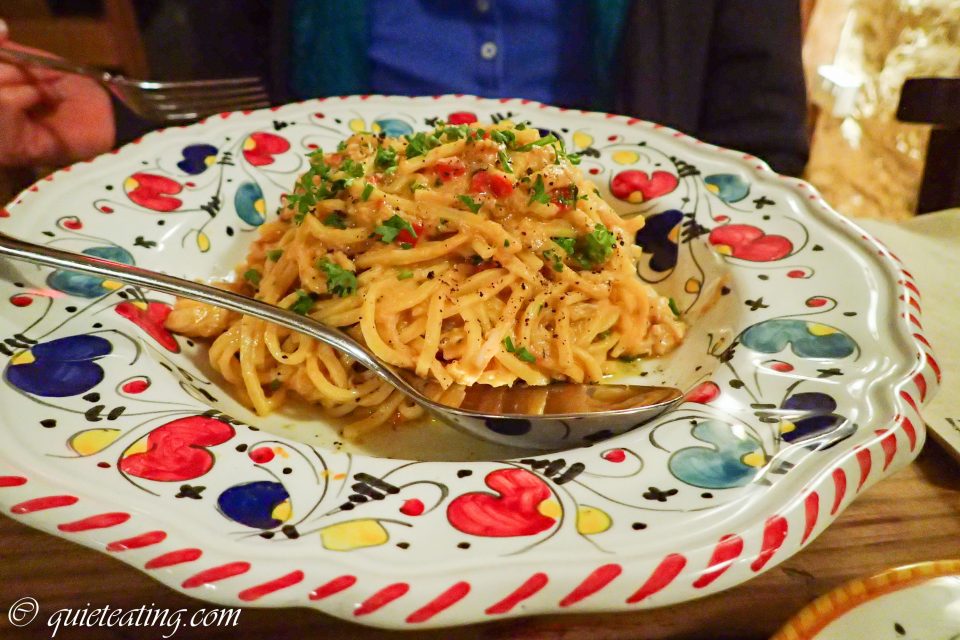 Linguine, Dorset crab meat, parsley, lemon and chilli.  The meaty crab and smooth full linguine was excellent.  A great balance between polished pasta and fulsome sauce.  Although I did find a little surprise here in the guise of a piece of shell but I guess you can’t have everything perfect. 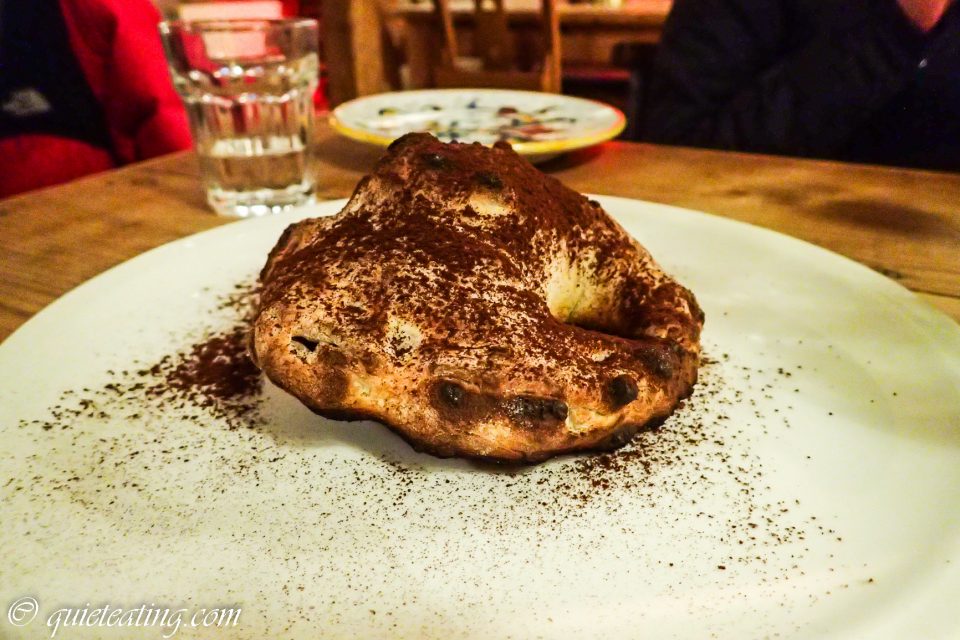 Calzone, mascarpone and Nutella.  This calorie rich dish made me happy as creamy chocolate cheese in a thin casing showed where this thickness of crust shown.  Perhaps we should have gone for calzone for the main courses.

Above was a collection of our two dinners which were rather good.  I heard that they had an outpost in London and based on the show put on above, I think I will need to pay them a visit.

Below was a collection of our two breakfasts. 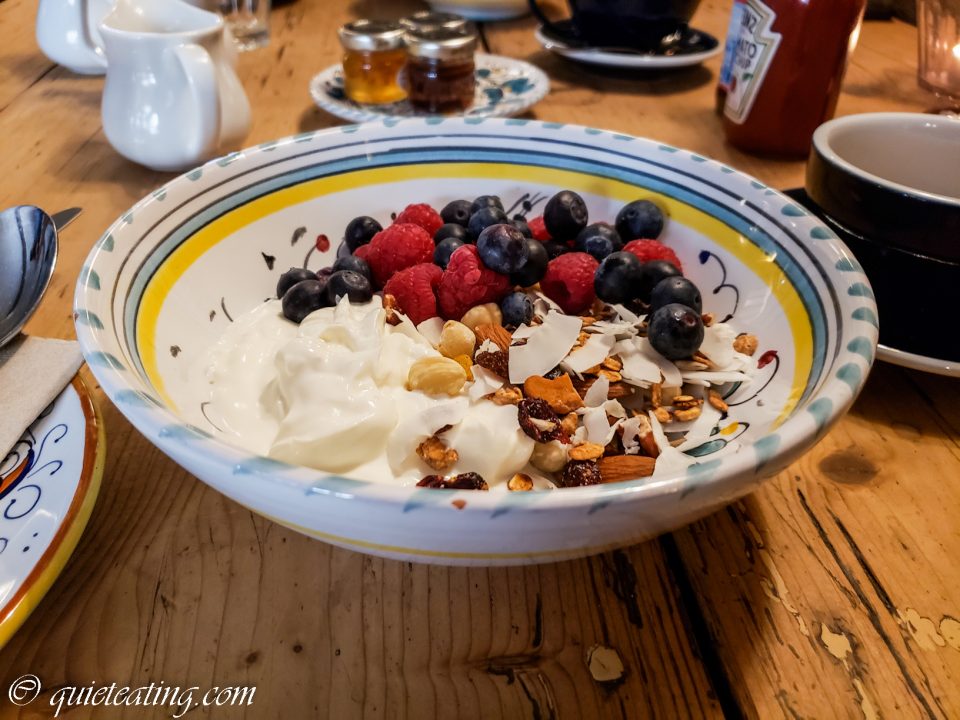 Granola with forest berries and yogurt.  Simple to make, rather pleasant to eat.  Although it felt like there wasn’t the same skill level in the kitchen needed for this. 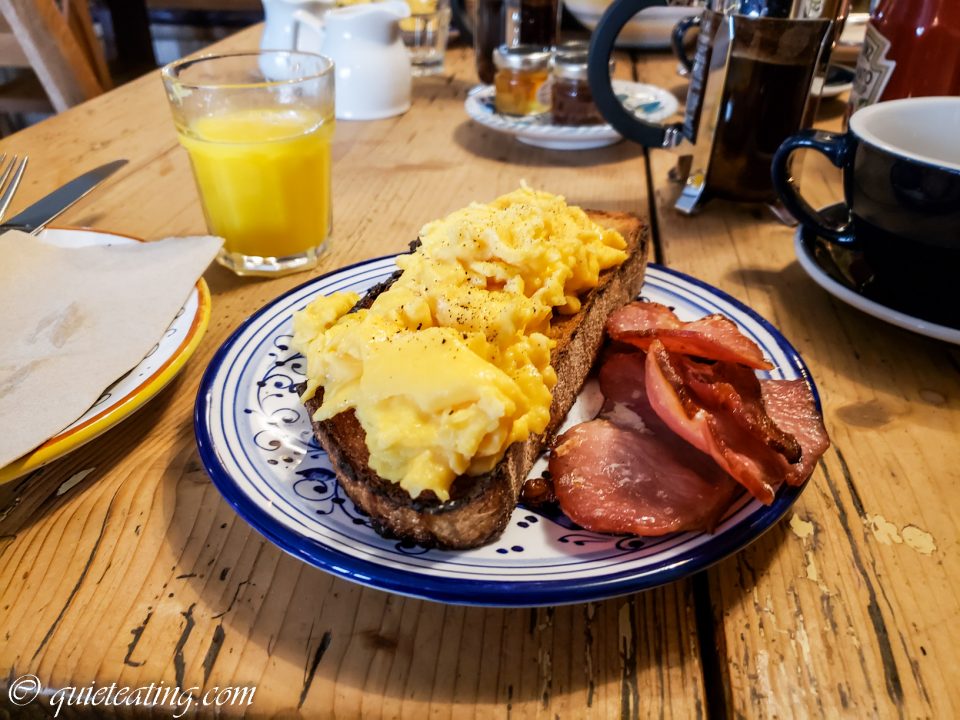 In between our meals we enjoyed some sightseeing.  Such as some lovely country houses. 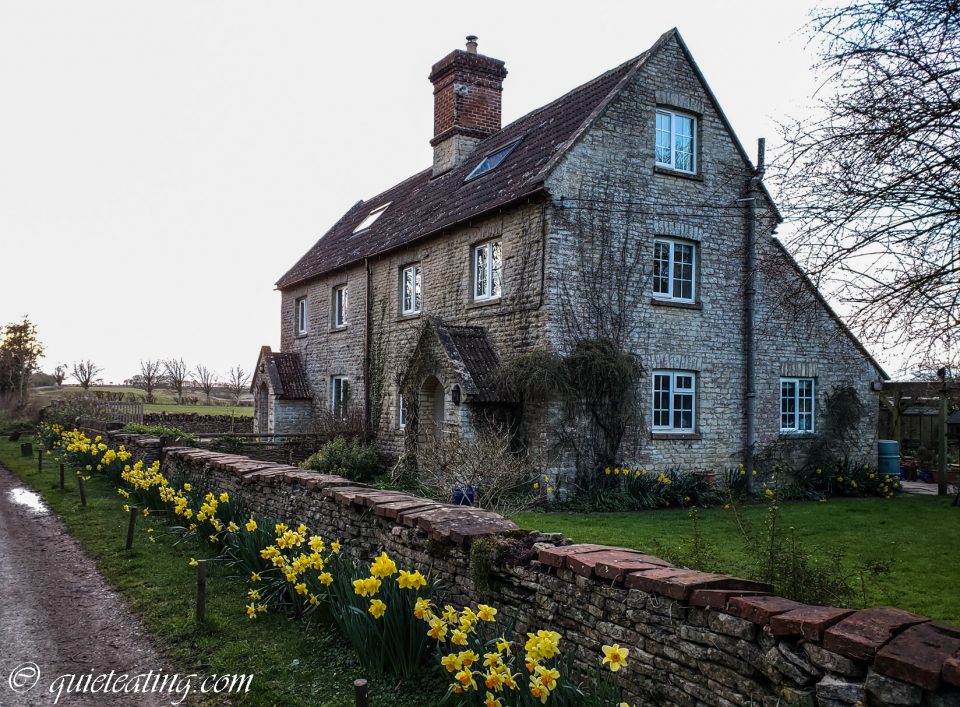 Although hopefully not near the disused train graveyard. 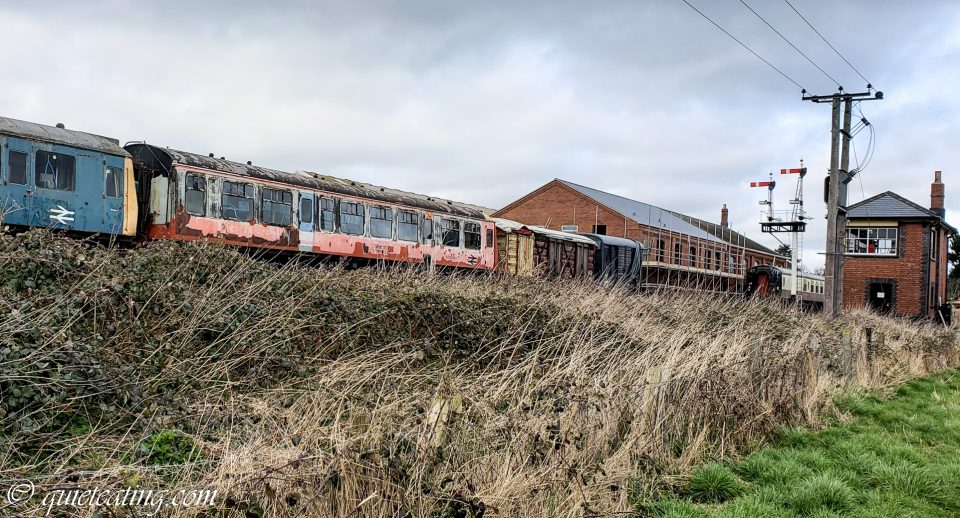 Look at that poor unloved carriage.  Kind of reminded me of the second breakfast I was to have.  I went to sleep dreaming of a decent breakfast.  I was disappointed.  Although my heart yearned for nut and berry granola, we were unhappily told that they just didn’t have any.  I’m talking about the berries here, not breakfast as a whole.  No replacement was offered.  Interesting.

As we waved for the waiter’s attention, we then asked him if they had any fruit instead.  We were told that he would bring it right back.

A grapefruit, an orange and an apple promptly appeared.  In somewhat whole form, so a bit difficult to eat with manners (i.e. without it ending up all over my face, my shirt and the floor.  I am kind of a baby most of the time).

Third time was the charm, as pestering the waiter once again, I asked if they might be so kind as to chop it all up.  Also hoping to avoid the coffee of the previous day, I asked for hot chocolate instead. 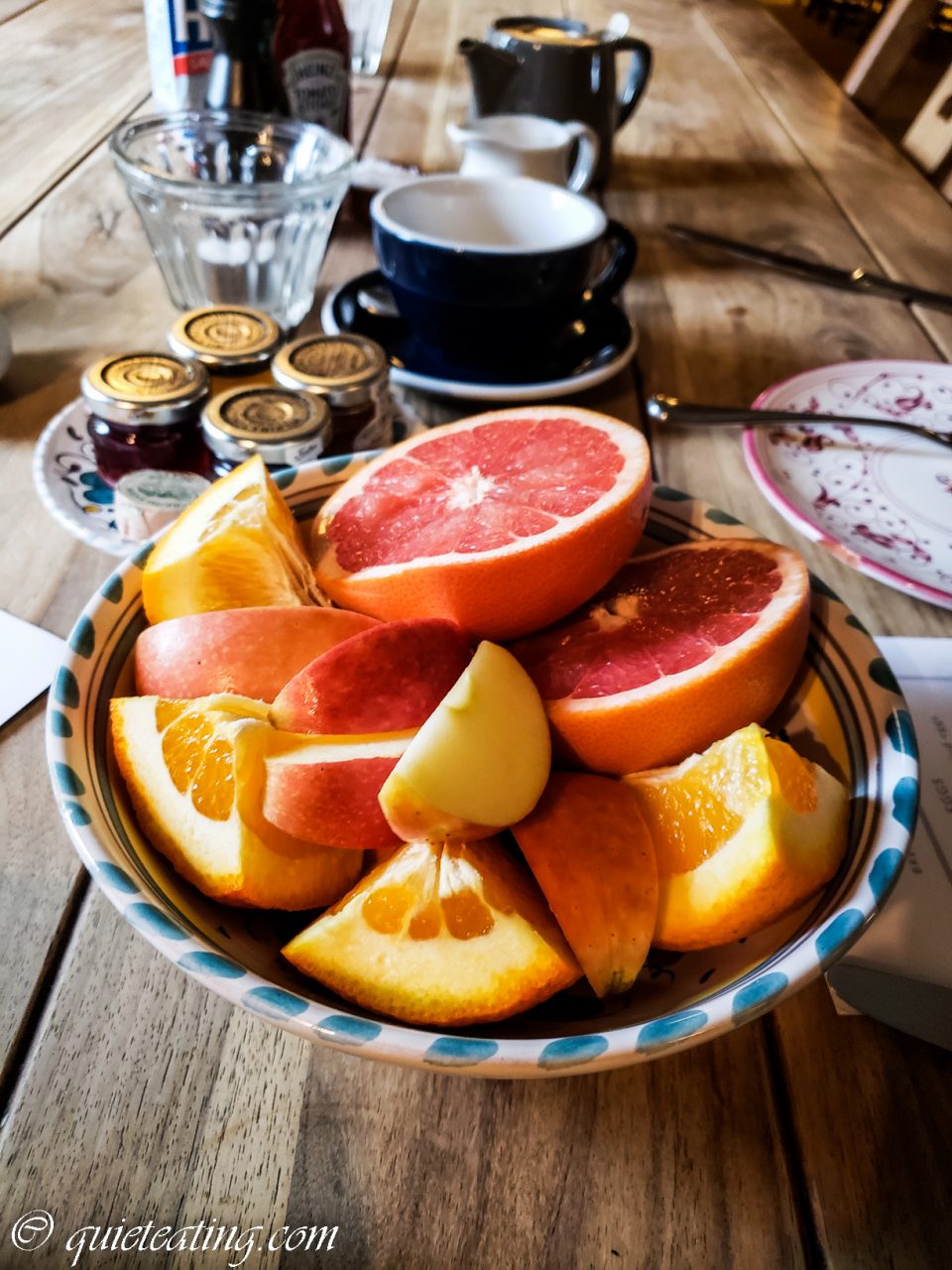 Following my bothering (I can be rather irritating if I put my mind to it), a hastily and roughly hewn bowl of fruit appeared.  I guess I should have suspected this given the level of the morning service.  Would have been nice if the waiters had stopped to think about how they could make the meal better although I did not venture for a fourth inquiry as that might have lead to extra ingredients being added to my food.  Perhaps the service was such because they knew that this was a captive audience.

I would have wished to say that the taste made up for the lack of presentation but unfortunately that was a thumbs down too.

As we left to have a walk around the area, I was perplexed.  It almost seemed like we had gone to two different restaurants given the inexplicable difference in service and fare for lunch and dinner.  Given the great stuff that we had had in the two evenings before, it almost seemed that we had visited two different restaurants (which is entirely possible given my sense of direction).  Then again, perhaps there is a reason for the name for the restaurant.  Just as the Stump could refer to an insult or a landmark, a great kitchen or a more half baked one, perhaps I should take this as a lesson.  The key to a great meal is consistency.  Otherwise that’s where things fall down, or perhaps I should say be wary of the Stump.  If you went looking for it, you might trip and fall on your face.  Then again, a face full of dirt might not actually taste that bad in comparison.