Sometimes I feel an urge to do something.  To clarify this is (usually) not to do something destructive, like the time in my youth when I jumped all over my sand castle which I had spent hours painstakingly building.  If it was time to leave, I would have the joy of demolition.  Neither is it an attempt to partake in a particularly thrilling activity.  I see no reason to bail out of a perfectly hale plane.  Let’s not get me started on those people that jump off objects secured by a giant rubber band. Instead, I am speaking here about the attraction of certain types of food.  In this case, it had been a while since I had had Japanese food so when my friend suggested the same, I was all for it. 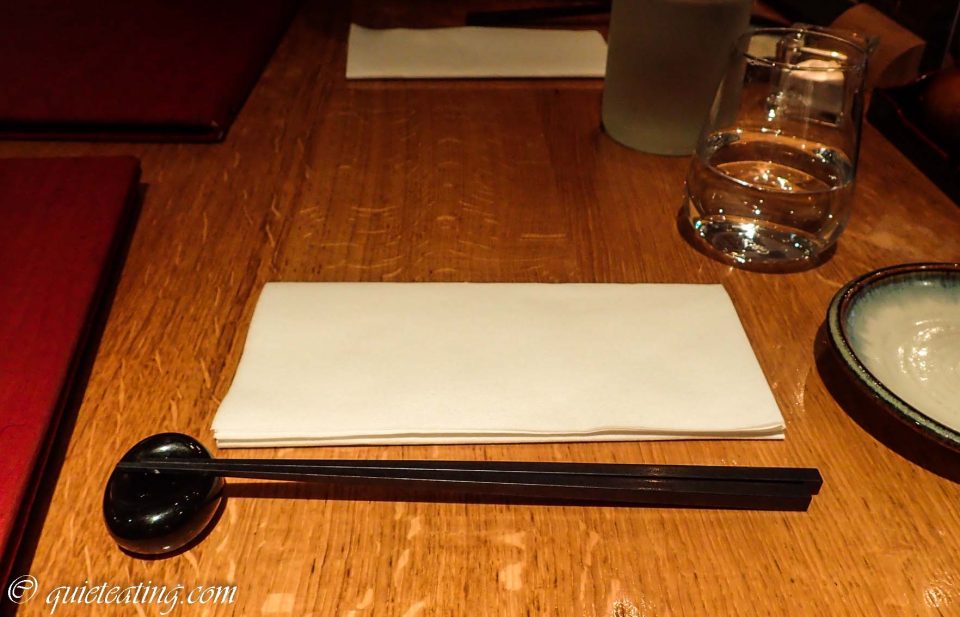 Requesting a place central (Mayfair it is) and at a decent price for an early dinner, this was how we decided on Chisou.  My speculative and pessimistic self was on guard though as I have often been disappointed by Anglo-Japanese collaborations.  They just don’t seem to get it right somehow.  Although, I am probably being unduly harsh here (in my usual way), as years in Japan tend to do that to someone who loves food. 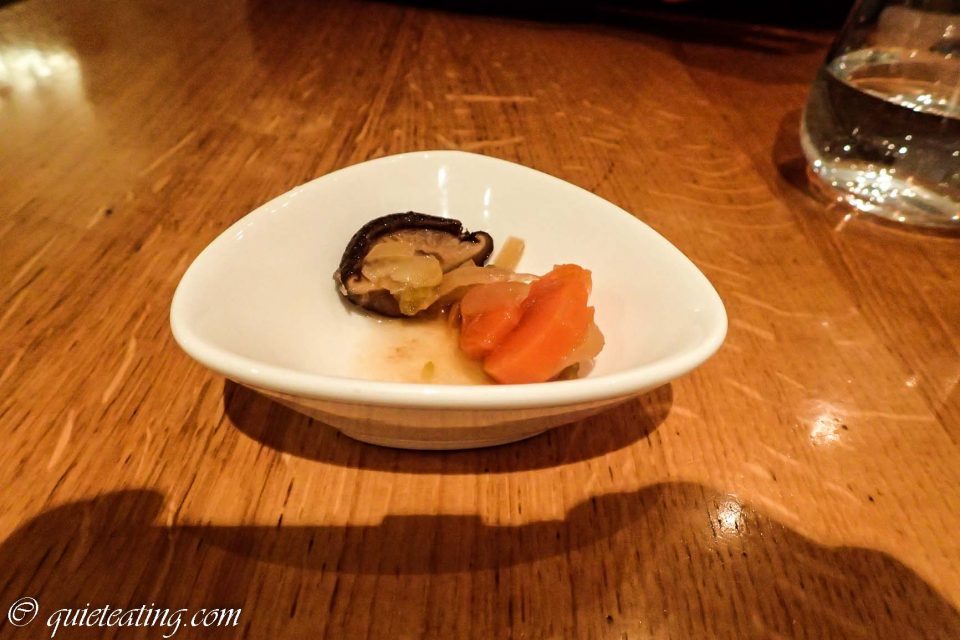 Suimono, mushroom, carrot and potato.  It was a nice touch to be greeted by the typical Japanese amuse bouche which is sadly mostly lacking here in the UK.  In my excitement and ravenous hunger I did an unforgivable thing.  I ate the potato before I could take a photo.  Yet satisfaction was short lived as these were merely decent.  Nothing special. 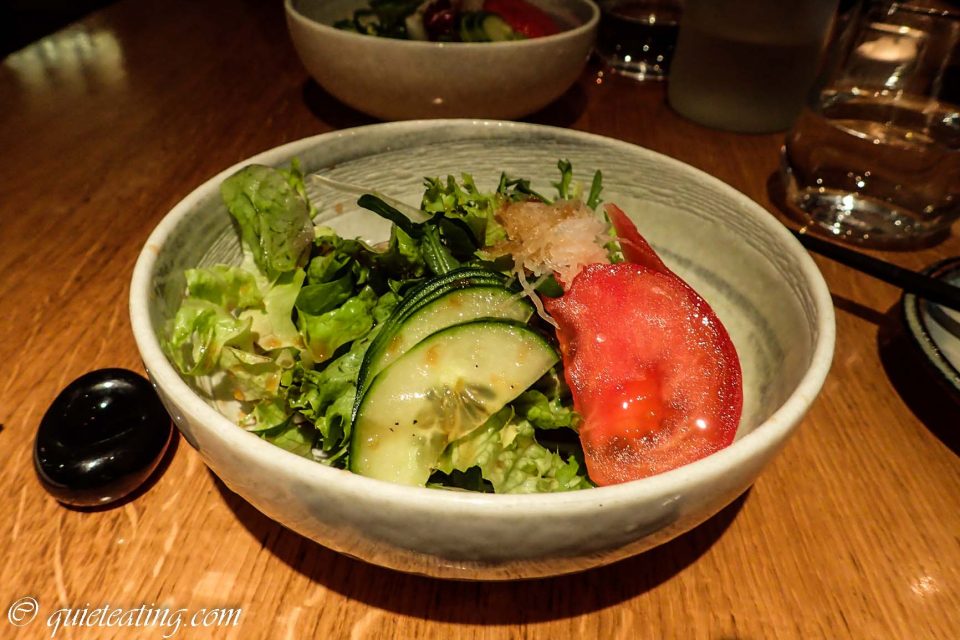 Mixed green leaf salad, tomato, cucumber, lettuce and light Japanese dressing.  Crisp and clean, although if salad is not like this, you probably have bigger things to worry about.  Although salads do not require prodigious skill to make them taste acceptable.  It was ok. 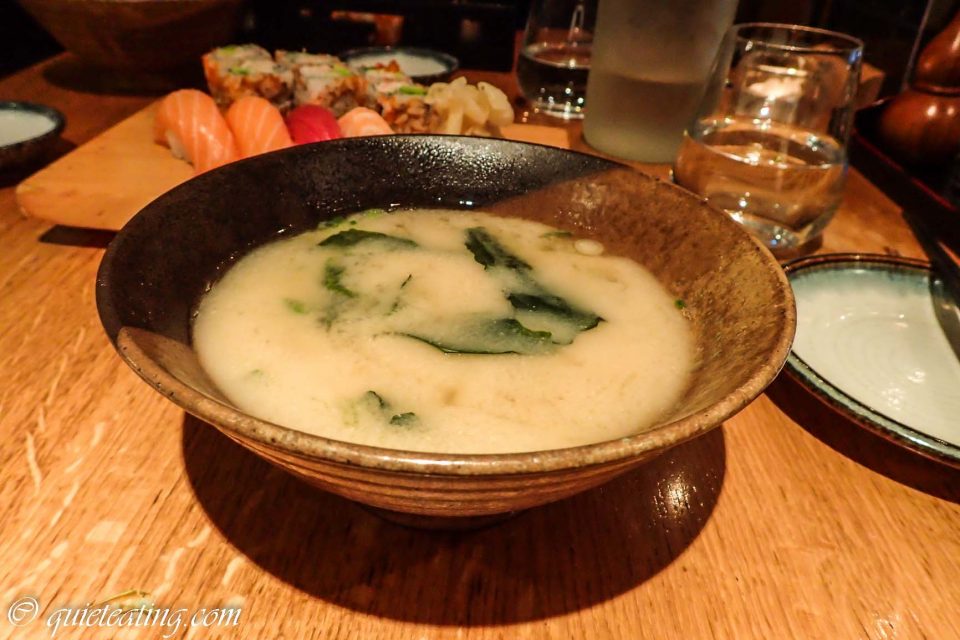 Miso soup.  A rather generous portion, something that I was happy not to finish.  It defeated me not because my stomach has shrunk as I have grown older (although according to my friends, no wiser; instead I seem to be regressing and becoming more stupid) but simply because it just didn’t taste that good.  It just did not taste of much at all. 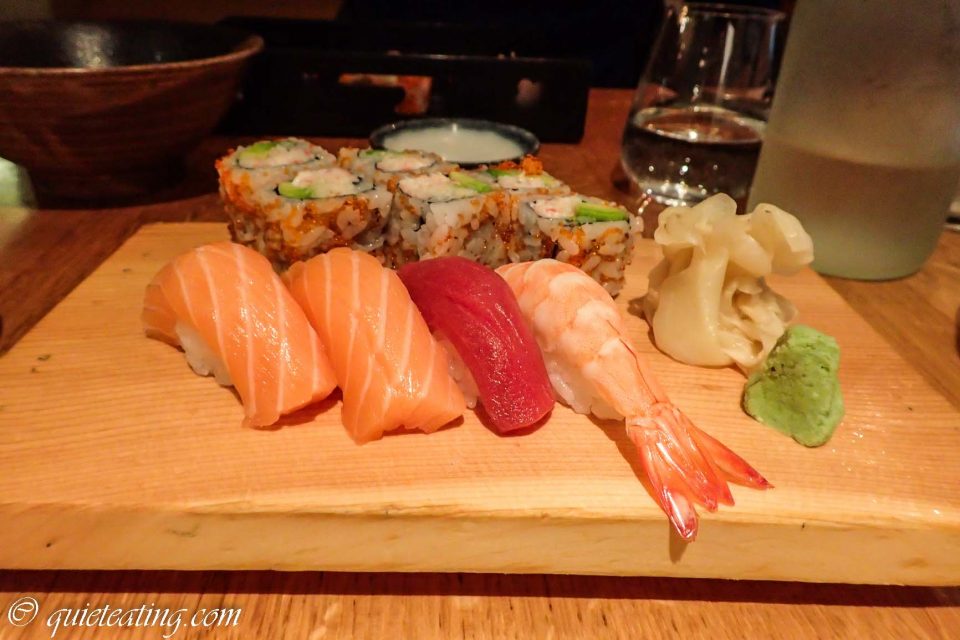 Sushi.  Starting top left going clockwise, unagi maki (avocado, crab, eel, fish roe), ginger, wasabi, prawn, tuna, salmon.  The unagi maki was alright, if the strange mix disguised any clear notes of anything in particular shining through.  The ginger was sadly tasting of nothing, so served only a bulky purpose.  The wasabi was that usual dribble that you can expect in the UK, disguised horseradish it promised excessive heat and pain if too much was added.  The prawn was the opposite of the unagi maki.  A sad tasteless piece of seafood.  The tuna, better with (something) to delight the tongue but that then again the prawn wasn’t hard to best.  The salmon was the best, it was nicely bouncy, tasty and outshone the rest.  Simply because it tasted of something. 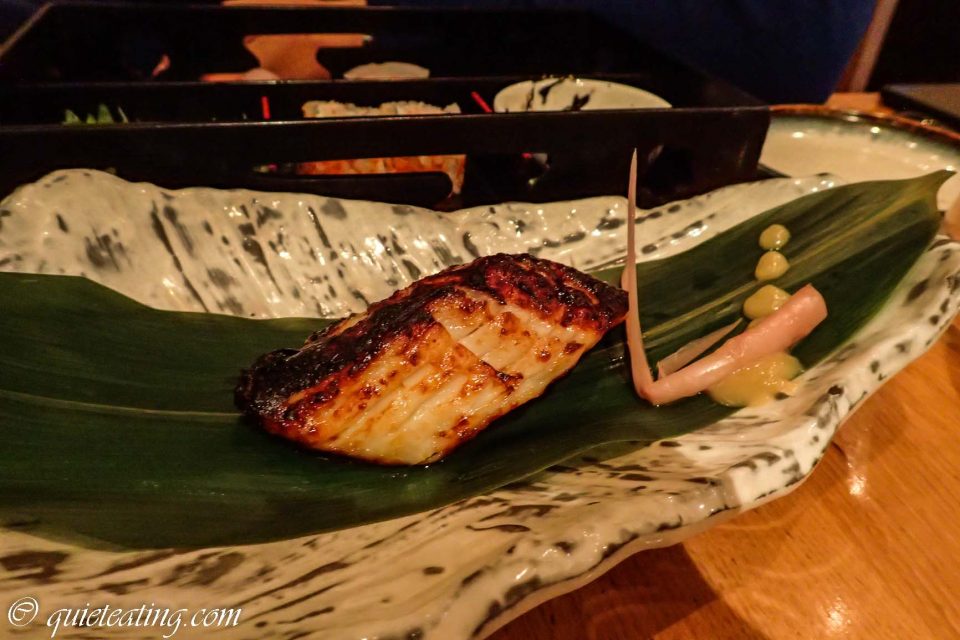 Black miso cod.  This was slightly better than the sushi, if a rather meagre portion.  Flaky and flavourful, it was not bad even in its rather reduced state.  This was part of the black miso cod set, I would have walked away hangry if that was all I had.  Good thing I was greedy and ordered other stuff. 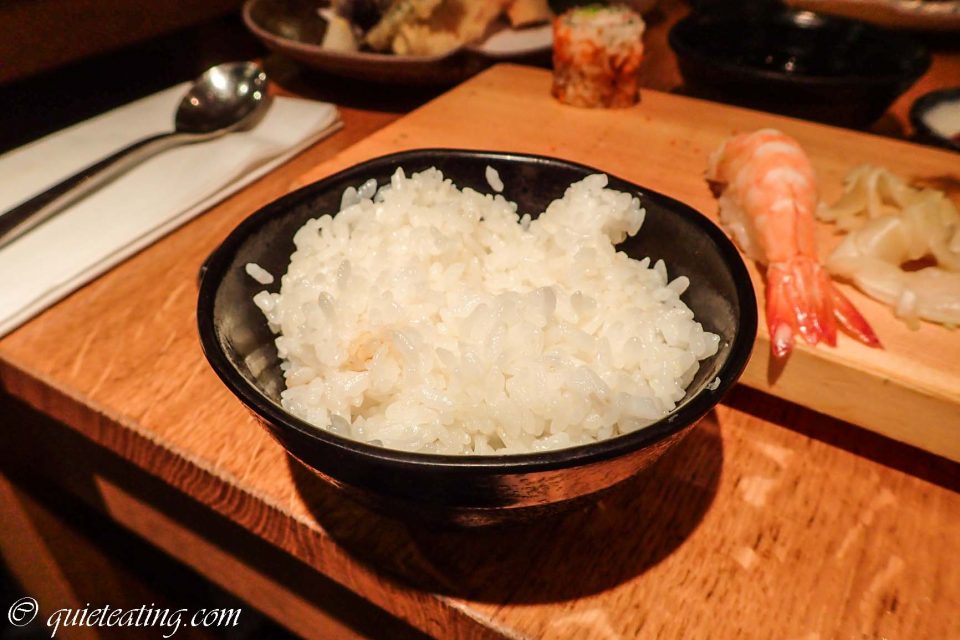 Rice.  Ok, if nothing special.  Perhaps they should take some lessons from Japan where it is seen as imperative that each rice grain stands up by itself.  Almost saluting before they are ingested.  Instead this sad dish was a bit too mushy as it congealed together into a shapeless mash. 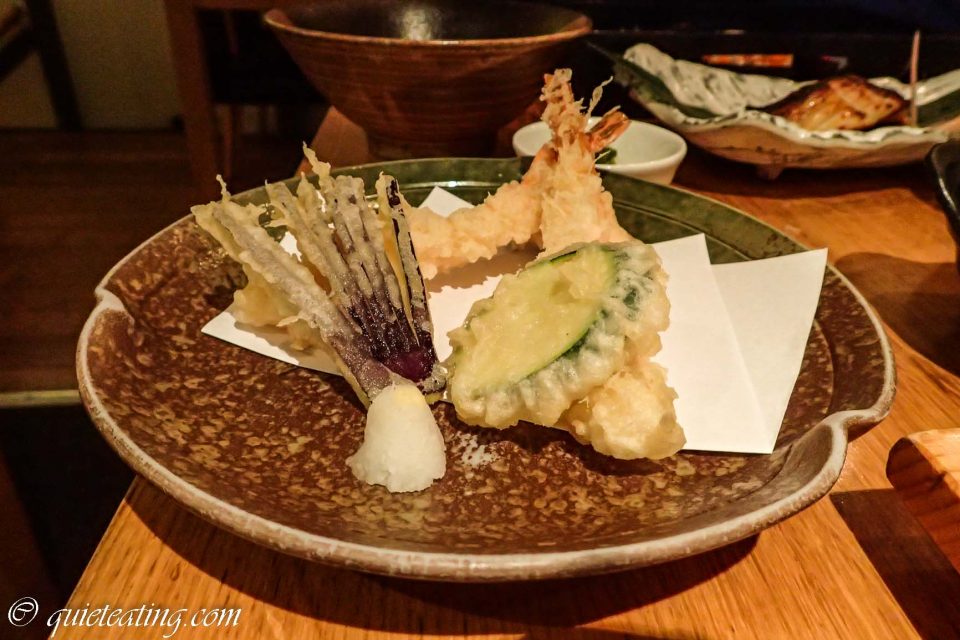 Tempura prawns, egg plant, prawns and salmon.  People seem to think that Japanese food is always healthy.  They say it is all about the sushi and raw food!  Lack of cooking has to make things good for you. When people say this, I am tempted to point to the grass outside and say if that was the case, grazing on the lawn would be the best for them.

Such misconceptions can be corrected when people are introduced to other Japanese foodstuffs.  Tempera, tonkatsu, teppenyaki, various types of furai – such oil-based creations hold a dear place in my heart.  Perhaps I should qualify that statement.  Good examples of the same make me happy.  This was not one.  In my layman opinion, I suspect it was fried in oil that was rather overused or simply wasn’t hot enough as the batter was quite bad.  It was so infused with oil that it tasted like eating oil with a coating of prawn and batter.  Lest you think I am talking rubbish, just take a look at the picture above.  The tempura seems to glisten in oily welcome.  Eat me it pleads, your heart wants me. 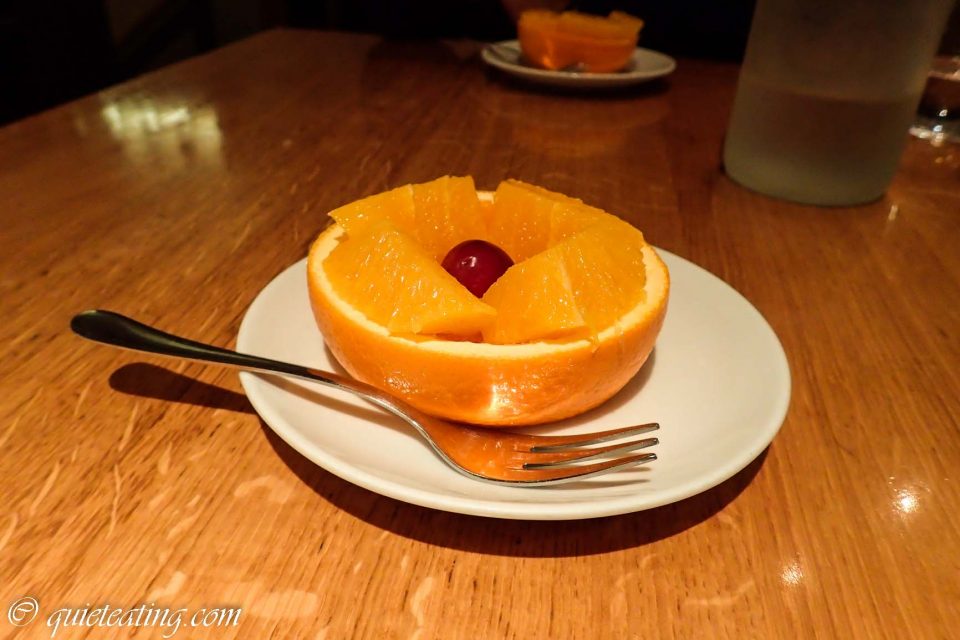 Orange with a grape in the middle.  This was actually good.  Perhaps because it did not require any cooking, merely chopping.  Perhaps an example of simplicity done well, the epitome of Japanese cuisine.