Once there was a dream.  And the dream was kind of weird.

Although dreams often seem to be nonsensical, this particular endeavour seemed to be rather extreme.  It was about how objects on the opposite stratum of the spectrum mix.  History is littered by others that have tried this before resulting in eminent success or disastrous failure.  What would it like be to have bacon and egg ice cream (it worked rather well).  Or it could be something more risque like the Bubba Gump Shrimp Co.  Long may I continue to avoid that.

So why not mix hot dogs, food to be eaten on the run with dubious origins from a dodgy looking stand with champagne, province of the bourgeois.  Such extreme juxtaposition of foodstuffs would be an interesting experiment.  As a lesson of what can go wrong if nothing else.

Yet sometimes experimentation (although not that often in my case) produces something worthwhile. 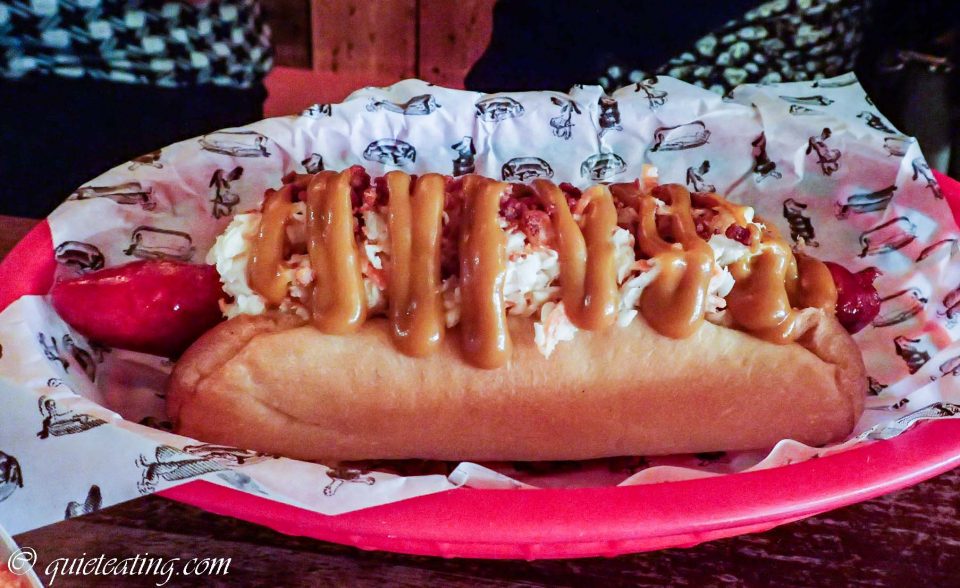 Fourth of July, southern BBQ sauce, coleslaw and crispy bacon.  An interesting hot dog.  Pig and cow, or perhaps I should say bacon and beef sausage, complemented each other well.   Meaty and meaty is always a winner in my eyes.  Coleslaw and BBQ sauce completed the dog which meant that I could say that I had my veggies too.  Yet, of all the elements, it was the BBQ sauce which was the greatest surprise.  With a tangy taste, it evoked thoughts of enjoying fireworks on American Independence Day.  After having this, I did feel a bit like celebrating myself. 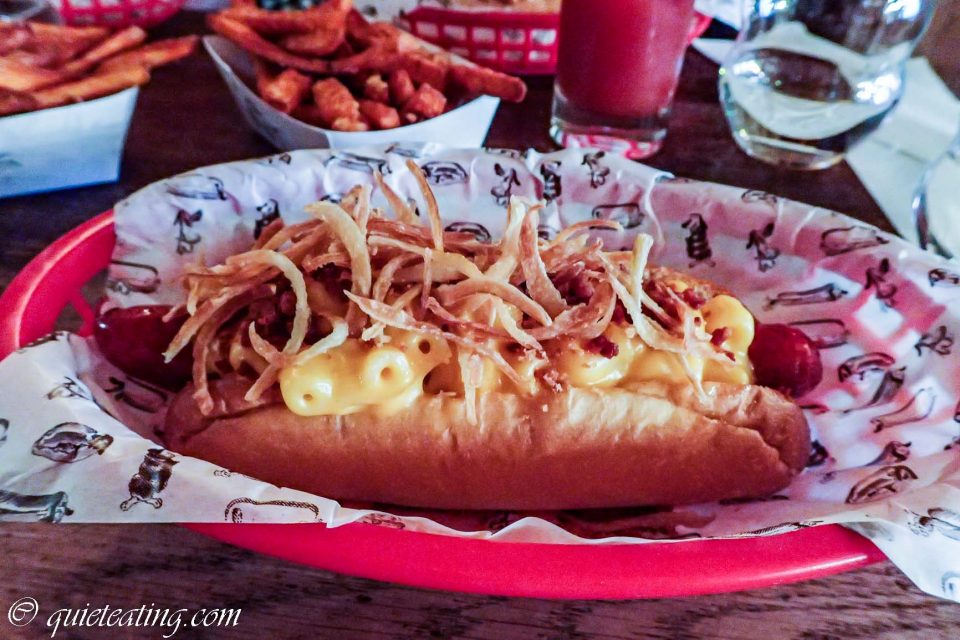 Mac Daddy, macaroni and cheese, crispy onions and bacon bits.  Despite the name, this has nothing to do with McDonalds.  Richly creamy, crunchy crisp onions with bacon bits to finished it off.  This has to rank as the best hot dog I have ever had.  The lushness of the pasta, the crackle of the onions, the depth of the sausage.  It’s richness almost threatened to overpower me.  This was an example of the complete product being far greater than the sum of its constituent parts. 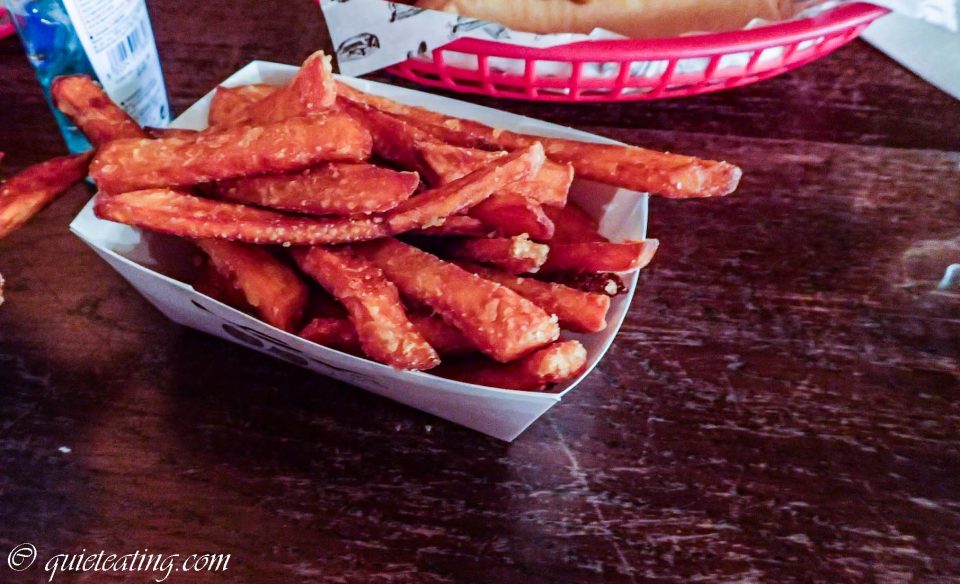 Sweet potato fries.  With a deeper taste than normal fries, these were happily almost oil free.  Well, at least they seemed that way as they lacked the sogginess of other chips I have known.  A pleasant alternative to more mundane potato chips. 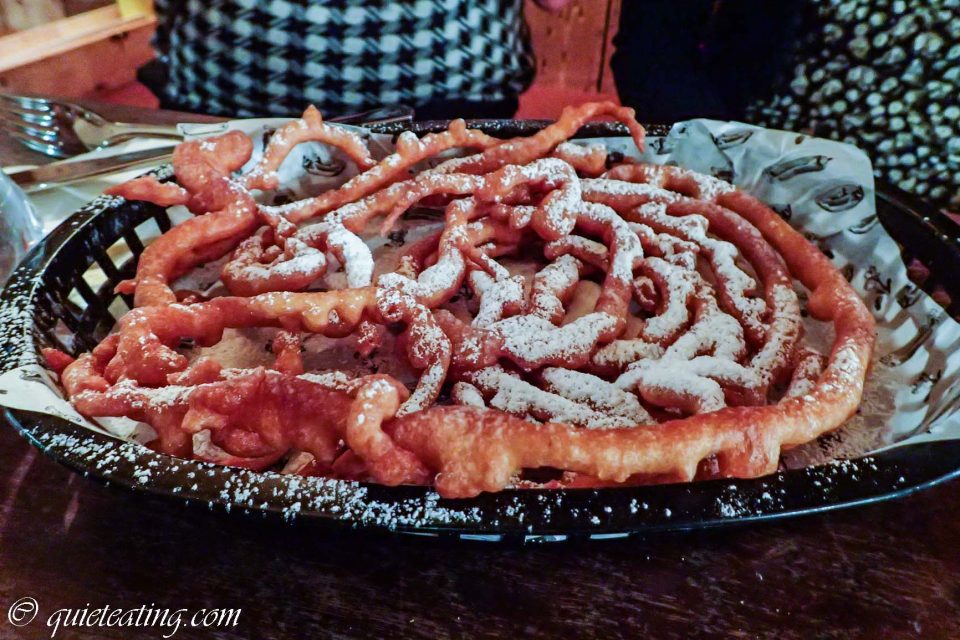 Cake.  Deep fried dough dusted with caster sugar.  It reminded me of doughnuts, just presented in a far more interesting shape.  As I stared at this, I almost thought I could see shapes rattling by.  It transported me back to days in the amusement park where after various thrilling rides, it was deemed safe enough to fill my stomach.  In such cases, the fried dough tasted even better. 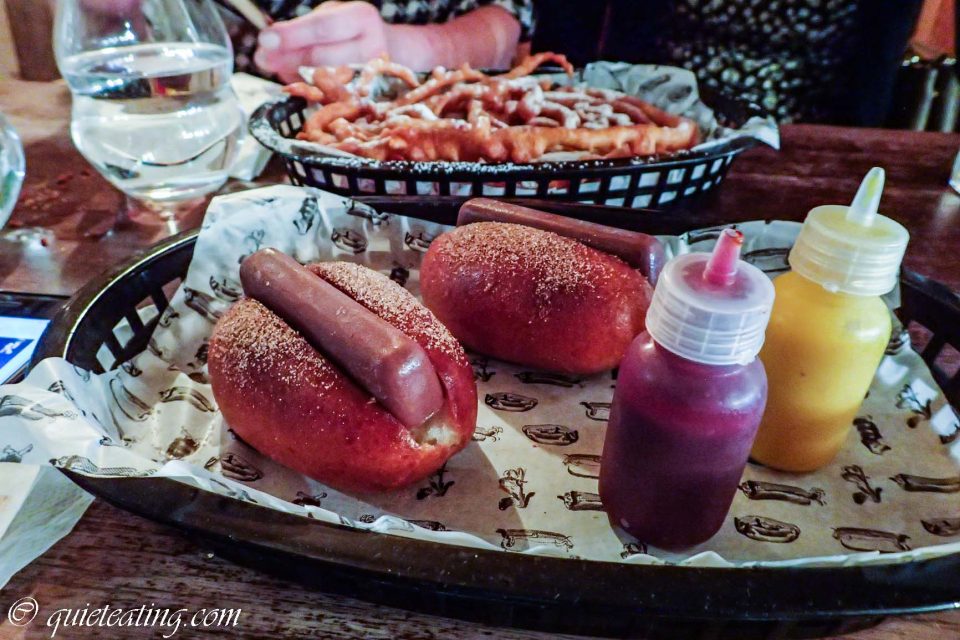 Chocolate hot dog, Jivara chocolate ganache, sweet cinnamon bun, cherry and banana sauce.  I was intrigued.  Who heard of dessert hot dogs?  It looks so much like a savoury treat especially with what looks like a frankfurter.  You would be mistaken.  That is chocolate on a deep fried bun.  With squeeze bottles of sauce to let you individually decorate your dog.  Crunchy bun, sprinkling of cinnamon, chocolate frankfurter with banana and cherry.  This was an interesting and great end to the meal.  It left me with sweet dreams.

This was a very strange place for a person like me to venture to.  On account of the fact that I am a teetotaller.  I always thought that that meant more money for food.  Instead, I have to rely on what my dining companions told me, that the champagne was excellent and at very reasonable prices.  In my defense, this lets me taste the food without any distraction.  So if people regard me in pity as I did not partake in liquid courage; instead, I console myself that with hot dogs like this, who cares about the champagne.

Lunch (a hot dog, a side and a dessert) was GBP20 excluding drinks and service.