Coffee, a nicety to have for some (like me), the nectar of life for others.

I am lucky (or not) in that coffee doesn’t really seem to affect me.  That is until I reach maybe 4 or 5 shots.  Then weird things start to happen.  Seemingly innocuous situations mutate into something rather delusional.  Sometimes it seems that bizarre flights of fantasy take over my mind.  There was the time when I was a little boy when I was convinced that my father could conjure coins out of my ears.  Actually, his fingers were just too fast for me and his powers of distraction rather developed.  In more recent memory there was that time when I thought that I was the best comedian in the world as everyone was laughing at my jokes. Well, actually they were laughing at me. And then there was that time when a reality TV show host became president of the United States.  Now, that would be a terrifying truth… 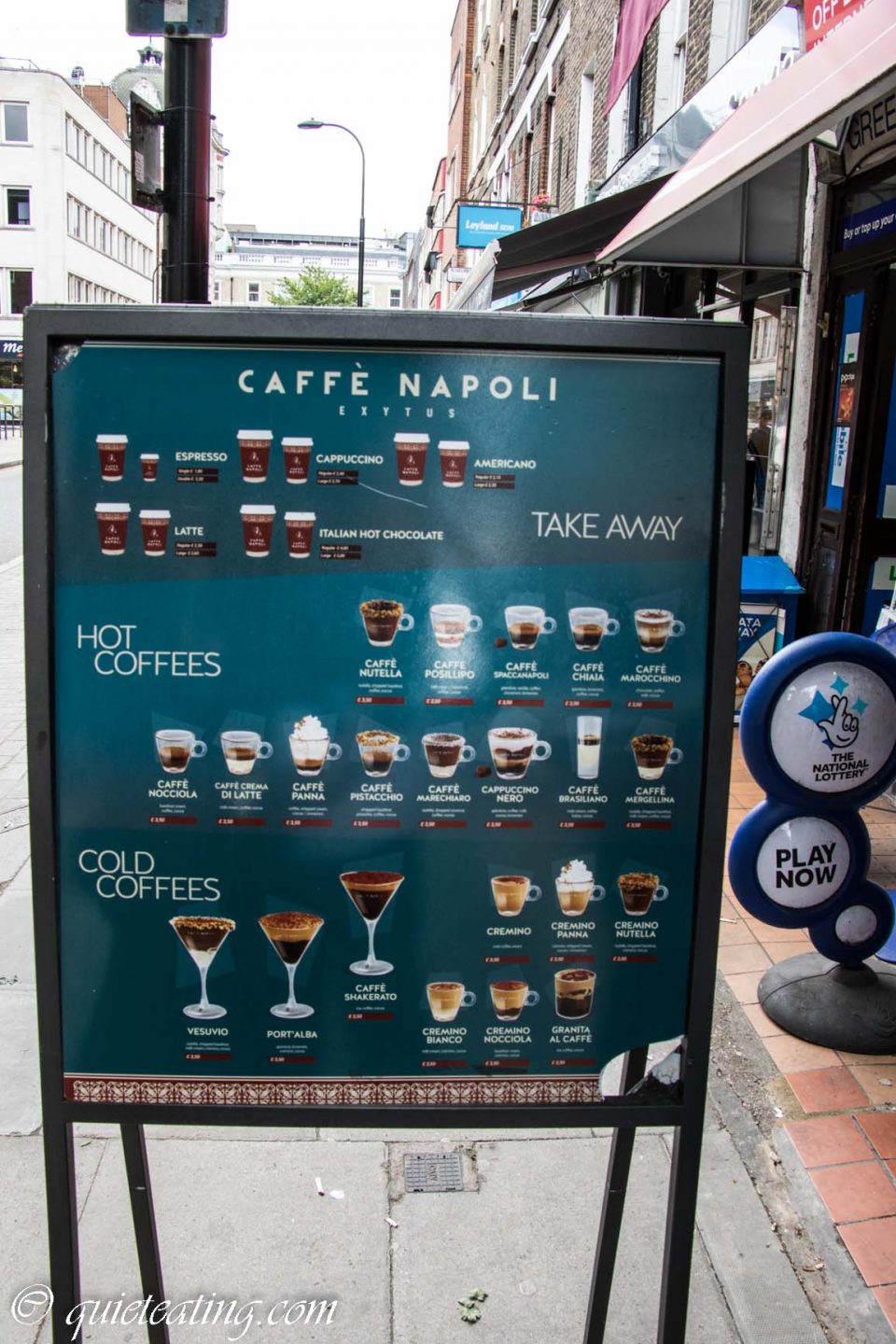 Yet I digress.  As this post is about coffee. So for those of you who feel a bit of a pick-me-up is needed in the day, this sign is more than enough to give some people a flutter. 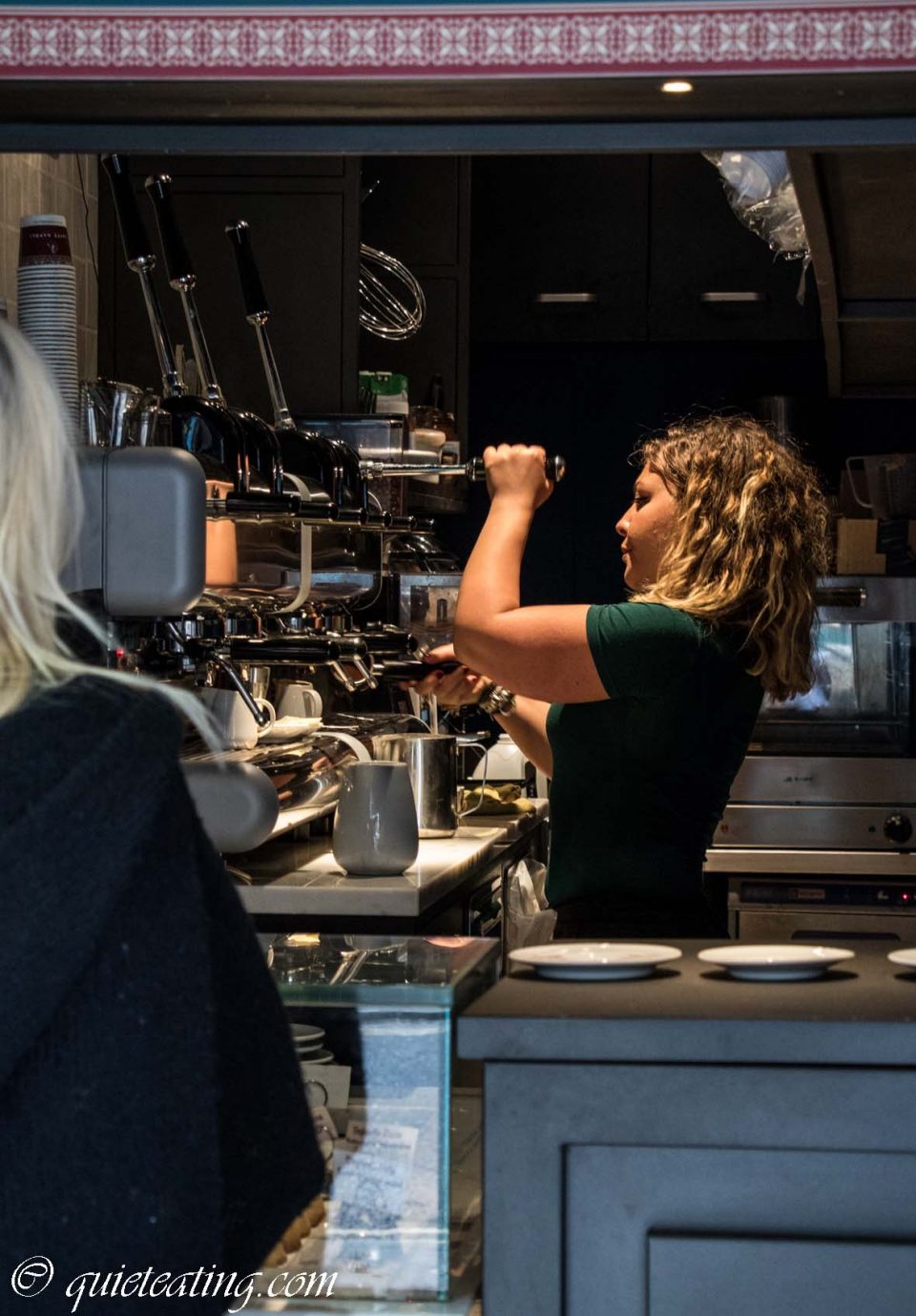 Even more so when you glimpse the particularly professional and shiny work stations behind the counter. 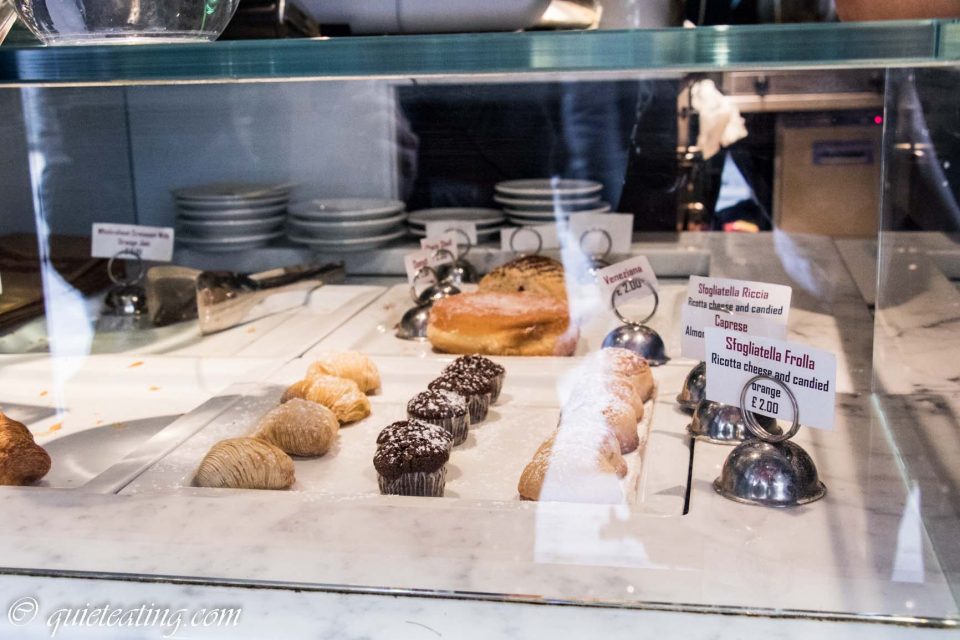 That is of course assuming that you can tear your eyes away from the pastry collection. 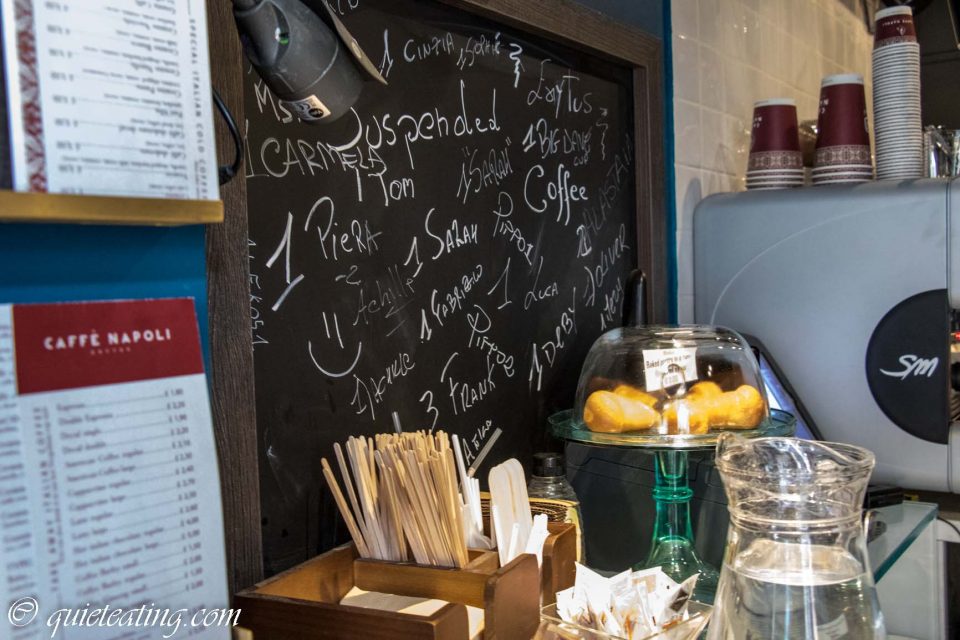 At this Italian coffee shop, I learnt some interesting Italian coffee culture.  The custom in Italy is that at coffee cafes, customers would perhaps decide to pay for two coffees.  One for them and one for the board.  Their name would then adorn the wall in case a citizen down on their luck (i.e. broke) swung by one day and asked nicely for a coffee.  In which case, the additional coffee would be redeemed on their behalf.  A particularly worthwhile custom.  Paying generosity forwards.  Far better than calling other people (and countries) names.  Real life is not about the ratings. 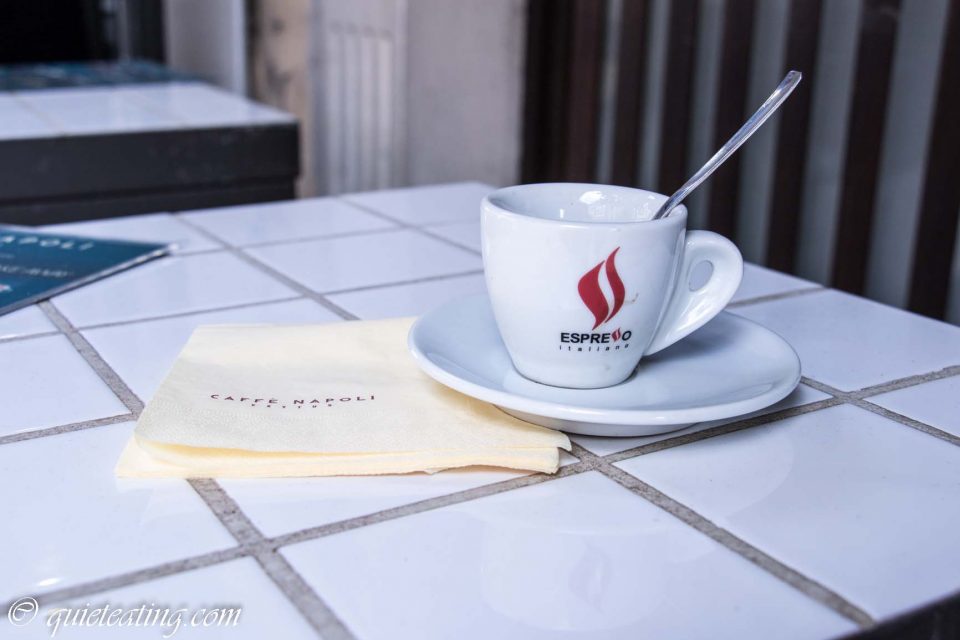 Espresso.  Now this is what we were here to try.  Rather strong, full bodied and deliciously pungent, this was a dream.  A great way to start your day, clearing the smoke that might be in your head after a long day (or night) out. 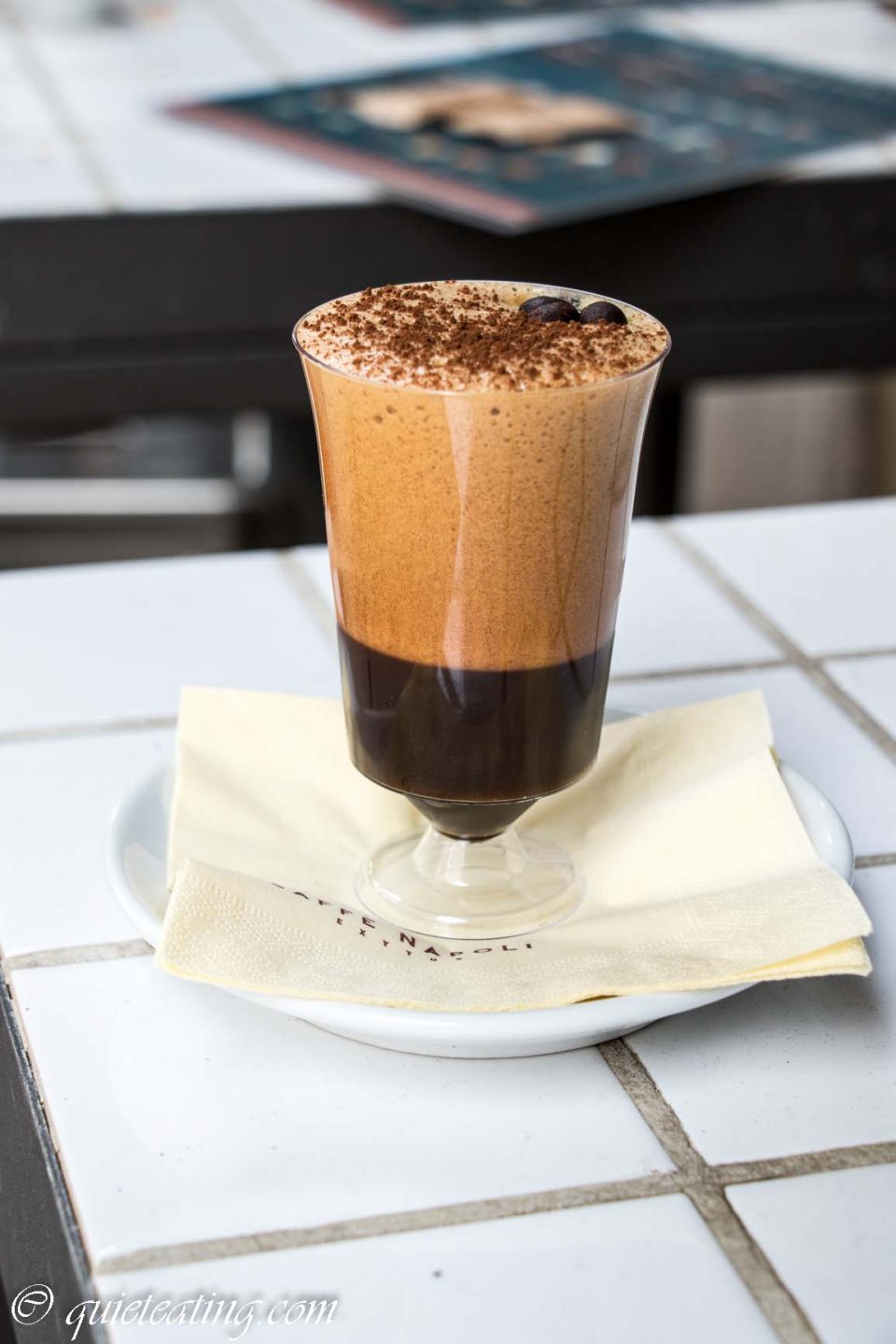 Caffe shakerato, ice, coffee and cocoa. Deliciously cold with deep coffee flavour, good and particularly satisfying. The coffee was exceptionally smooth and without any distracting bitter notes that I often find elsewhere.  This was an excellent refreshing drink. 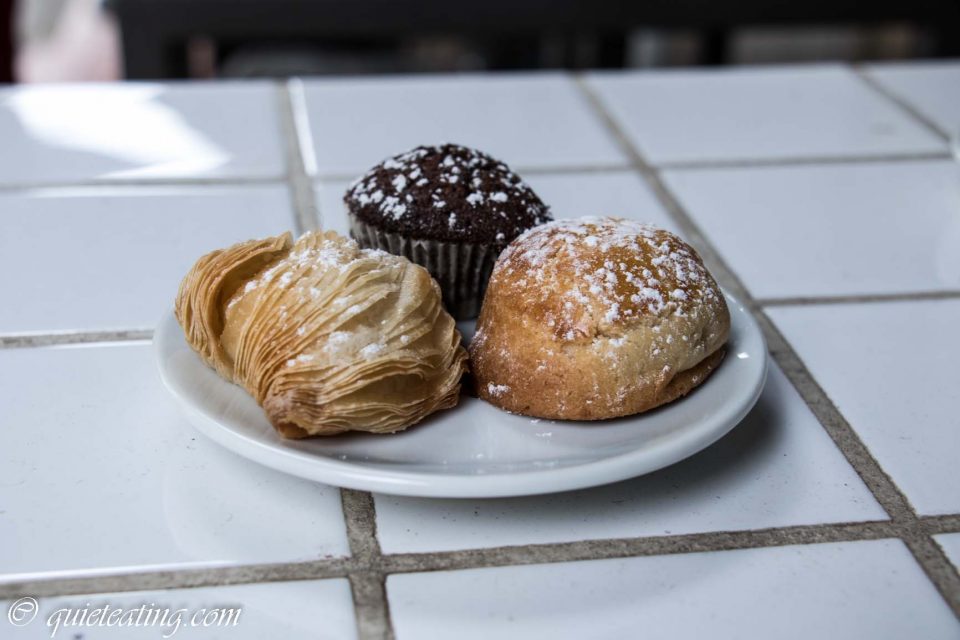 From the top moving clockwise.

Yet it was the pastries that were particularly delectable.  The caprese was moist yet bouncy and with just the right amount of chocolate and sugar.  Not too sweet but just enough to give a little pick up.  The two sfogliatellas were stellar. The frolla was a warm crust hiding meltingly soft cheese with a hint of orange inside.  The riccia was stiff and crunchy pastry sheets hiding a delectable interior.  After having all three of these treats, I do suspect that these may become a roaring success in London. Maybe if pastries like these appeared before the great vote about the European divorce happened, things might have gone another way.  A singular mistake if only to distance yourself from foodstuffs like this. 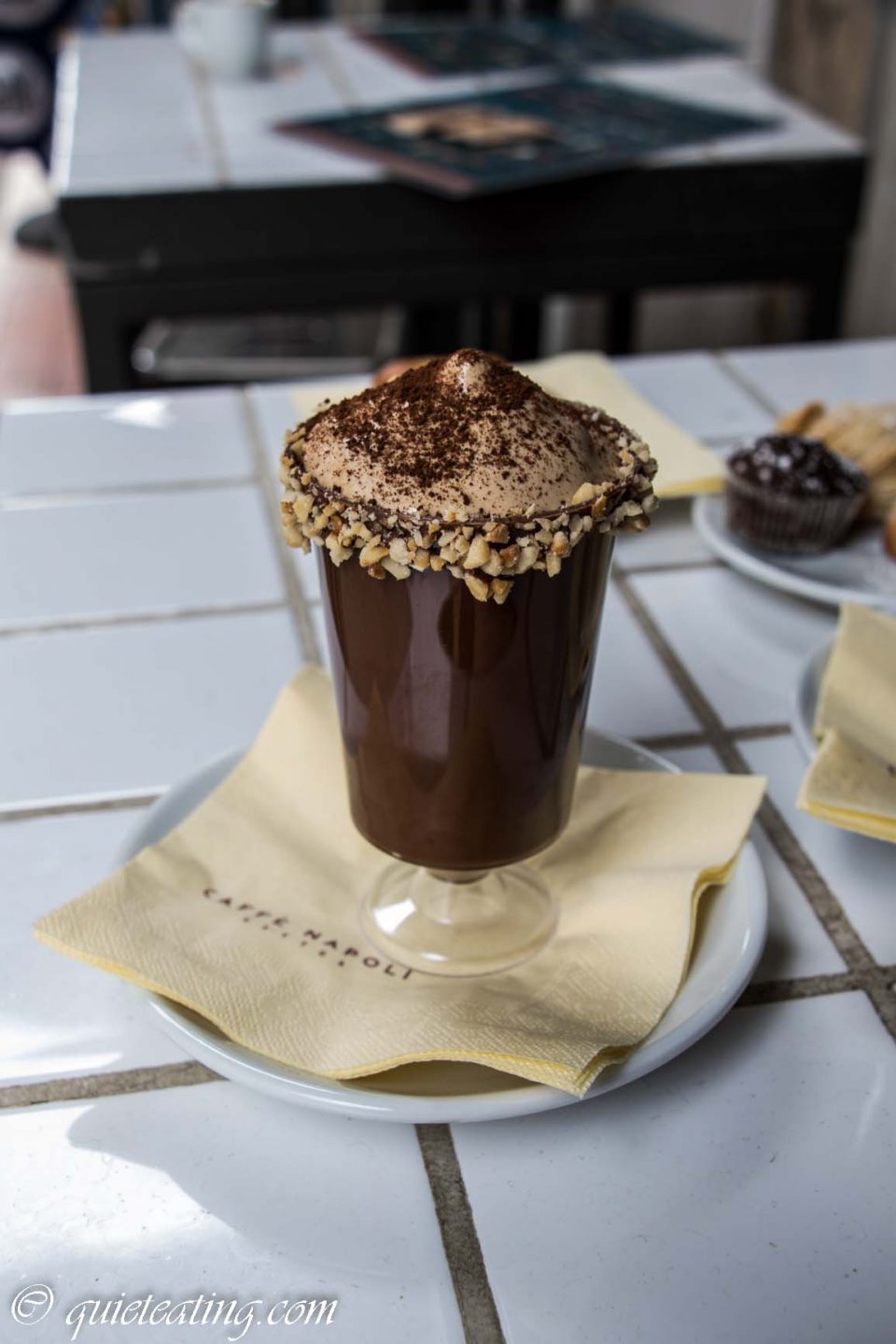 Caffee Nutella, Nutella, chopped hazelnut, coffee and cocoa.  The dark colour of this drink was rather puzzling to me at first. Did this mean that the drink inside was really that bitter?  Was it some different type of coffee they were using?  Or perhaps they just didn’t clean their glasses carefully enough.  Actually, the entire cup is coated with Nutella. And in case that isn’t enough nutty goodness for you, the lip is coated with hazelnuts. The superb mixture of this drink made me an instant convert with a sweet tooth like mine. 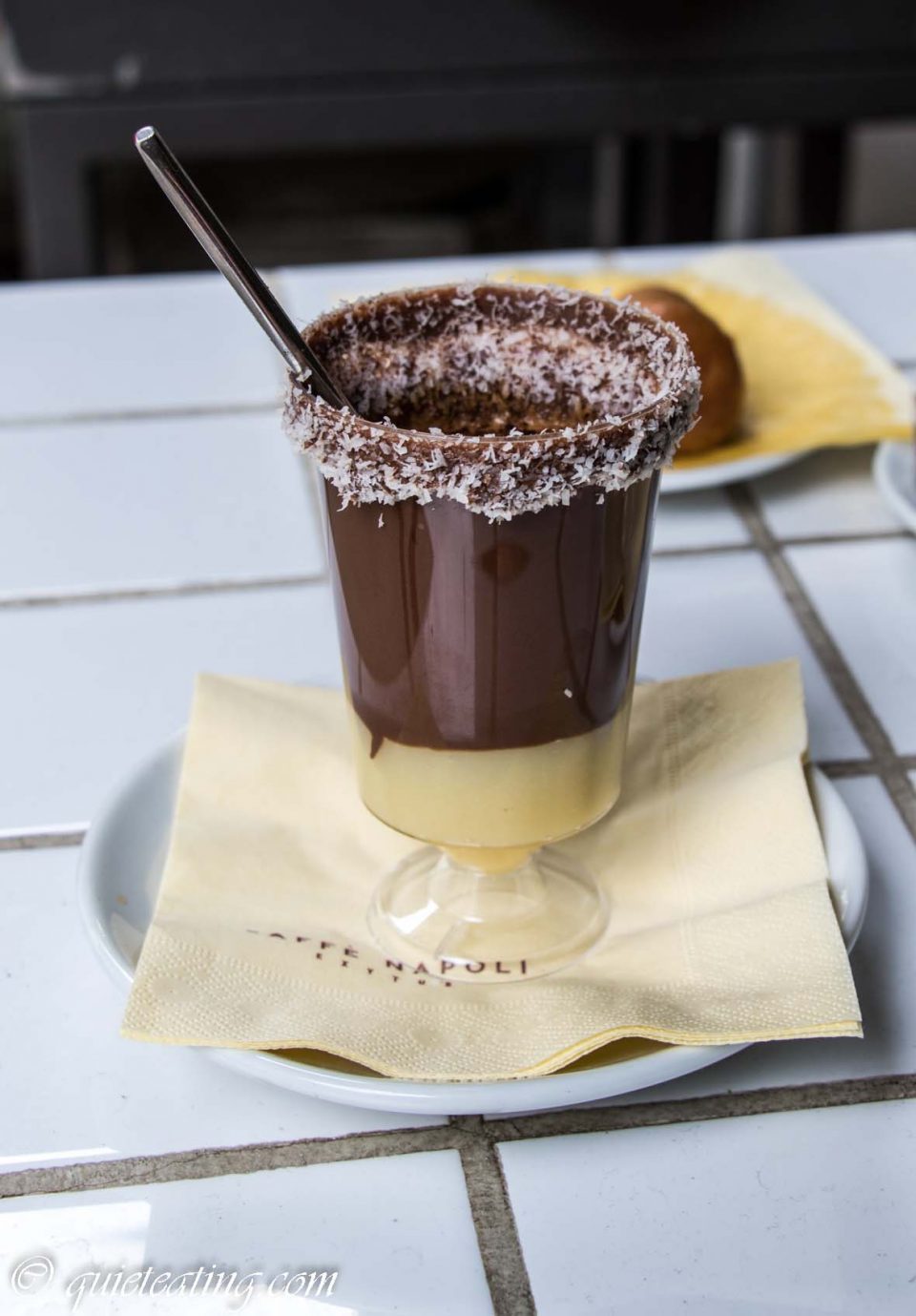 Caffe marechiaro, Nutella, chopped coconut, coffee and cocoa.  A more tropic drink with coconut.  Good for those who do not have a taste for cloying sweetness like me.  The most mellow of all the drinks that we had had this day which only served to highlight the quality of the coffee. 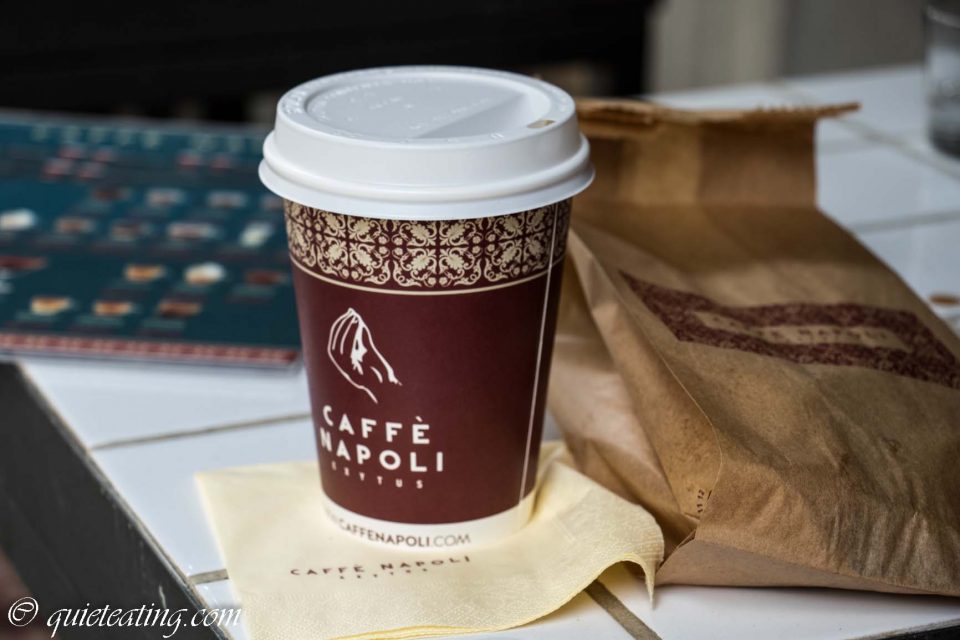 Latte.  A more standard drink at the very end.  But a very non-standard taste.  The taste of the latte, with smooth, milky, deep coffee stands up to some of the best.

This small shop off Goodge Street packs a surprise.  Near to the furniture megastores of Tottenham Court Road lies a place to take a well deserved break if the couches all blur into one.  Then again, it is not without its own own dangers as I was soon to find out.  Given my lack of discipline for superb food and drink, I couldn’t control myself when surrounded by so much good coffee and pastries.  It almost seemed that these exquisite treats were softly calling my name.  Although that might be the effect of having too much caffeine lured in by quality coffee.  And if that’s the case, who am I to say no?  Another coffee please!

We were invited to review.  Coffee and a small pastry estimated at GBP5.