Value for money.  An often touted phrase. It has almost become a pseudonym for cheap and cheerful.  Not that I’m saying that cheap and cheerful is bad by any means.  I know many, many restaurants which are worth more than you pay for them.  If only more of my life could be full of them.  Depending on your mood, the possibilities are endless, even if you aren’t willing to part with much hard earned cash.  You just have to hunt around.

So it is fairly ironic that Franco Manca, a fairly decently priced pizzeria, has now diffused its way over to Canary Wharf, home of overpriced and rather underwhelming food.  It has come to give the sometimes sad and usually gastronomically deprived captive audience in this financial centre, something of an alternative to all the established chains.  By of course, adding yet another chain.

Visiting in the first couple of weeks, I think they have definitely pulled out all the stops for the service.  As for the interaction with the waiting staff, I am tempted to give them  more than my maximum 1/1 for service.  You have to love a restaurant with a bit of humour. 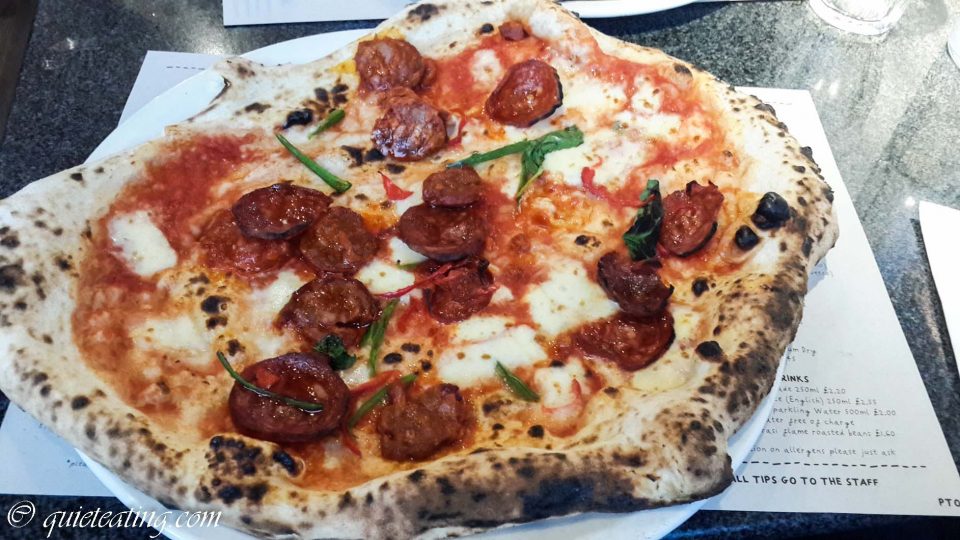 Tomato, chorizo and mozzarella.  All on a sourdough base.  The dough was great, bouncy and tasty, great compared to the uninspired chain dough of Pizza Hut, Carluccios or Pizza Express.  It had so much going for it, with a slight char to set off the accents of airy, smooth pastry. Yet, unfortunately it was the toppings which proved to be rather more sparse.  I was left scrabbling mightily for a bit of taste to add to my base.  The chorizo was full and flavourful but rather meager in portion.  The mozzarella was also more than adequate in taste but rather timid in making an appearance.  I guess they didn’t go light on the tomato base at least. The sad thing is that it could be so much more.

Yet, we all had a good time aided by decent food here, even if it could be more than just above average.  A particular pity when we came to experience the service.  They were clearly pulling out all the stops in the service and maybe that explains a rather unusual encounter as we were about to leave.  When I asked for the bill with the customary air scribbling motion, maybe I should have known that I would get more than expected.  In addition to the bill, I got a colouring paper with crayon. Sarcastic person that I am, I was almost tempted to remark that if I drew a masterpiece, would I get dinner for free? The problem was, I was laughing too much inside to give a witty reply.

So if you are stuck in the area at the end of a particularly torturous financial day, you could do much worse than visit this decently priced establishment with a touch of humour.  If the numbers wheeling around Canary Wharf are a bit too much, maybe you need to learn to appreciate the simple things in life.  Like a pizza, a crayon and a colouring book. You could do much worse than coming here.

Dinner (pizza and a coffee) was GBP 13 excluding service and other drinks.