In a break from our usual programming, I thought it might be interesting to go through a dinner cooked by my friends’ at their house recently.  Apologies for the bad photos but I brought my new camera to the party and then found out that the battery had drained….  Sad face 🙁  So you will have to be entertained instead by my description rather than my usually pretty photos, not that my witty prose isn’t a good enough reason to come read.  Not at all.

Let me introduce my little (or not so little) chicken. 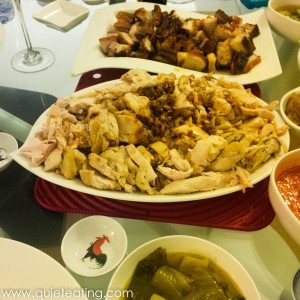 Best eaten with some home made garlic chilli sauce.  It makes me cry sometimes to think about how good this was.  Although I think the cooks cried for another reason, so many many many garlic cloves to peel! 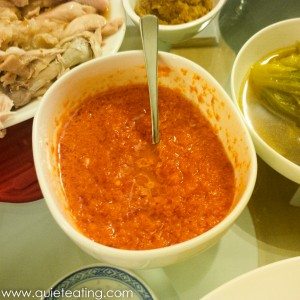 The chicken also produces some delicious soup (see how useful a chicken is and who said that all their produced that was useful was eggs.  Not even golden eggs…).  Chicken based and with yummy Chinese vegetables. 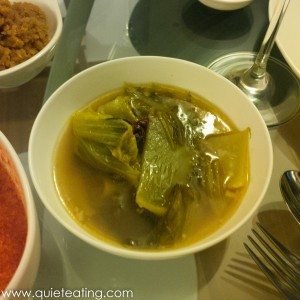 But if chilli sauce isn’t your style (scared of a bit of heat?), you could instead go with some lime.

Or the special garlic and ginger paste. 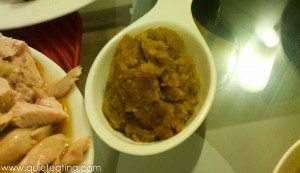 But if you were even more picky, then there was some home made roast crackling pork on the side.  Mhmmm.  My friends really went all out to cater for every need. 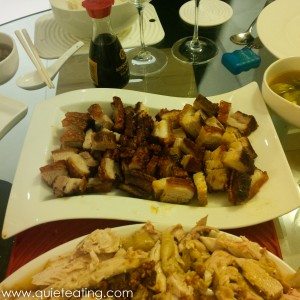 With food like this, I don’t know why these girls aren’t married already.  The lucky guys that might end up getting to know them better will grow in love, all while their stomachs concurrently increase in girth.  Well, at least it would if it were me.  Sometimes, the way to a man’s heart really is through his stomach!  Well, at least where chicken rice is concerned.

A quiet eating 8/10.  Unfortunately, you won’t be able to test the veracity of that statement, as this was a strictly home cooking event.