I usually am apprehensive about visiting hotel restaurants.  They managed to be consistently underwhelming.  After all, the logic seems to be if you have a captive audience for your food, why bother trying to deliver an outstanding product?  Yet, I had heard that the Waterside Inn bucked this trend.  Instead of a hotel with a restaurant bolted on, it was the other way round.  A hotel built around a restaurant so you would come for the food and then maybe consider spending a night in the countryside.

It was also a bit more difficult to get to than the usual.  In the small village of Bray, it required a bit of a hike to get to and navigation of some wilderness.  Adds to the charm being physically so far away from the hustle and bustle of London.  With the name of the restaurant, I initially thought that maybe we would have to take a boat to get there.  Thankfully, an overground route was available as I tend to get rather nauseous on maritime vessels.  Not an ideal situation for eating. 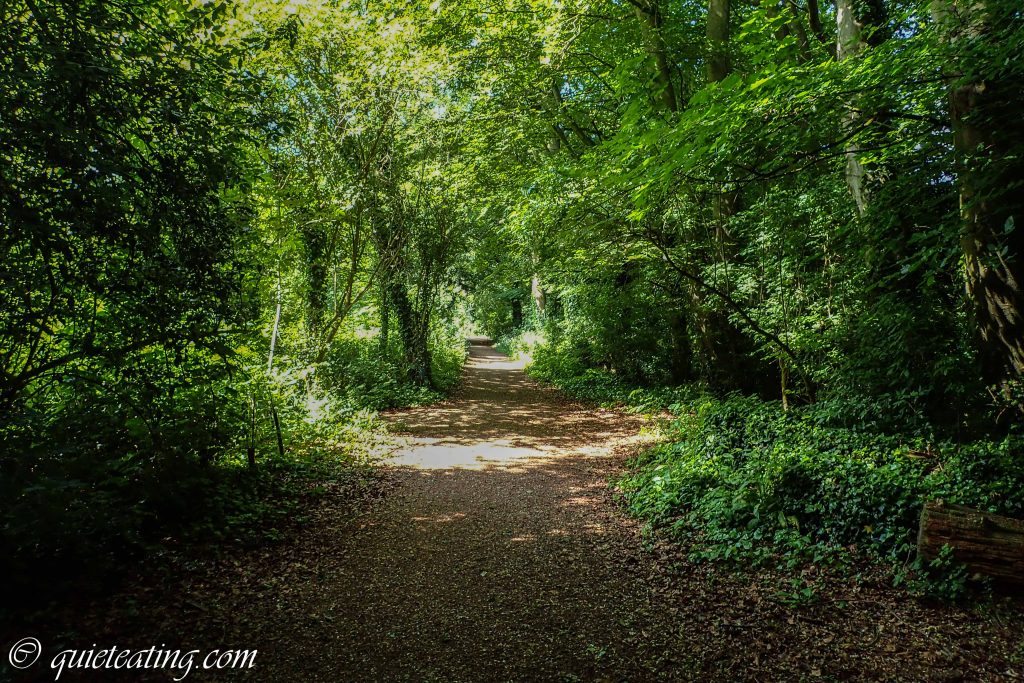 Instead through various country trails, our anticipation was slowly massaged.  I guess anticipation only serves to heighten the experience. 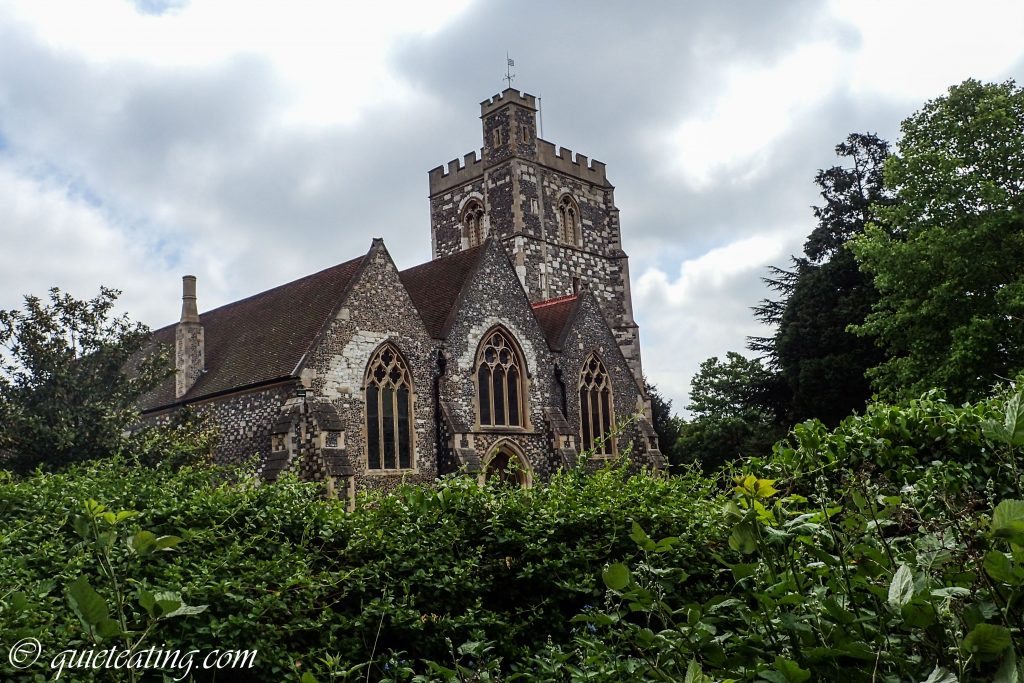 Quaint reminders of country architecture also featured on our journey.  Such as these lonely battlements on a tower.  Just in case of peasant revolt. 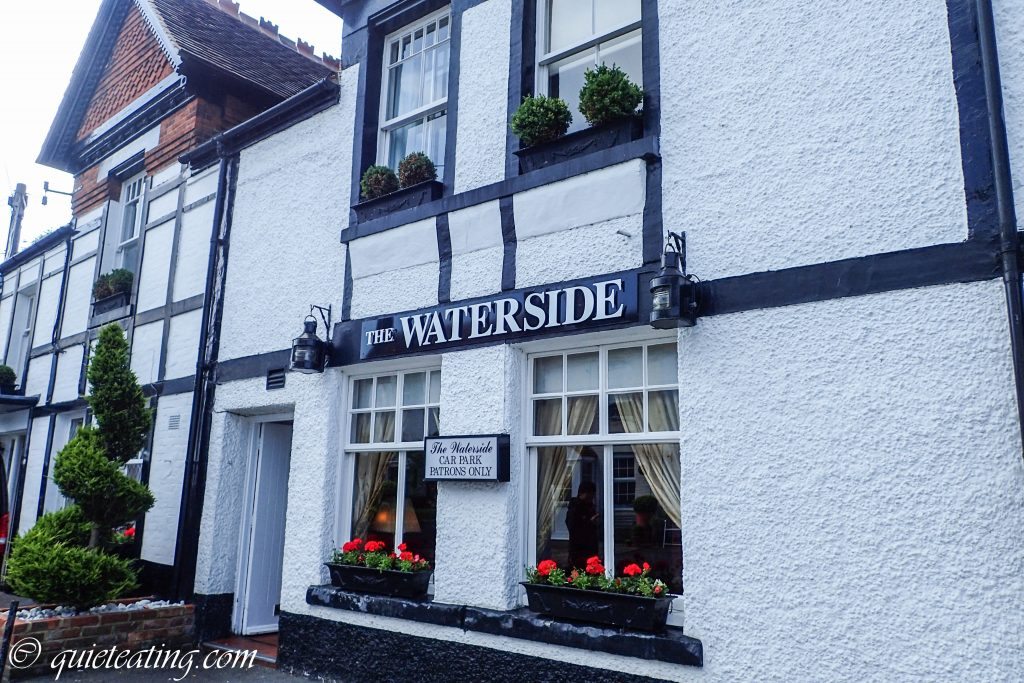 After our arduous journey through the forest (it took 30 mins to walk from the train station), we arrived at the waterside, which was (you guessed it) waterside to a small river where we could watch the rowers swish past. 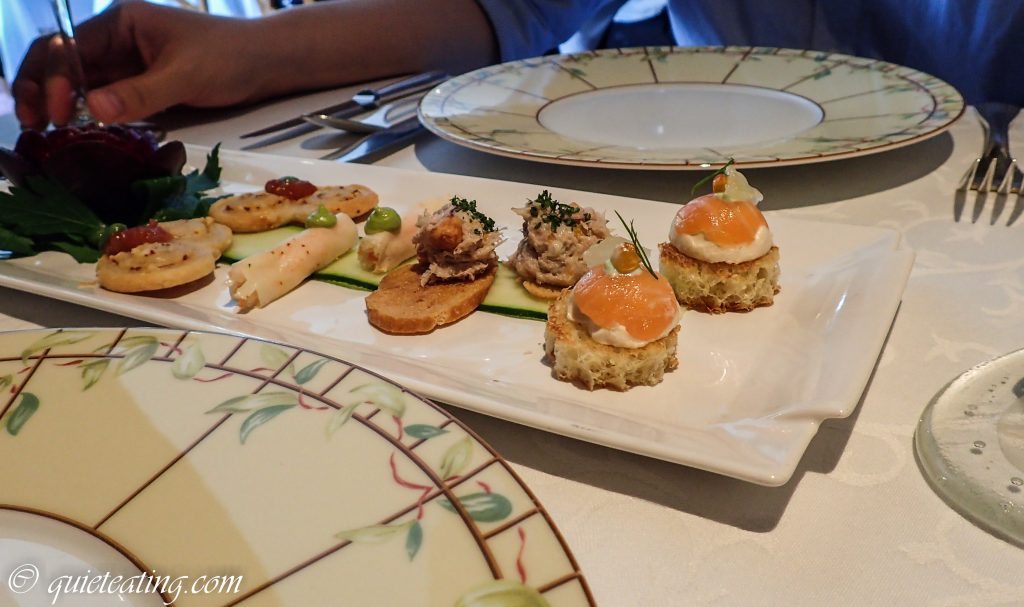 Left to right. Palmier with tomato chutney, spring vegetable spring roll, tuna mayo on crisp crackers and smoked salmon on toasted bread.  These little tidbits were delivered with professional alacrity before the menus.  The way they ought to be, thereby sating our hunger so we could purview the menu with food cravings slightly abated.  The palmier was flaky and tomato infused.  The spring roll was refreshing and crunchy.   The tuna on crackers, creamy and crisp.  The salmon tasted of the sea with a very clean finish. 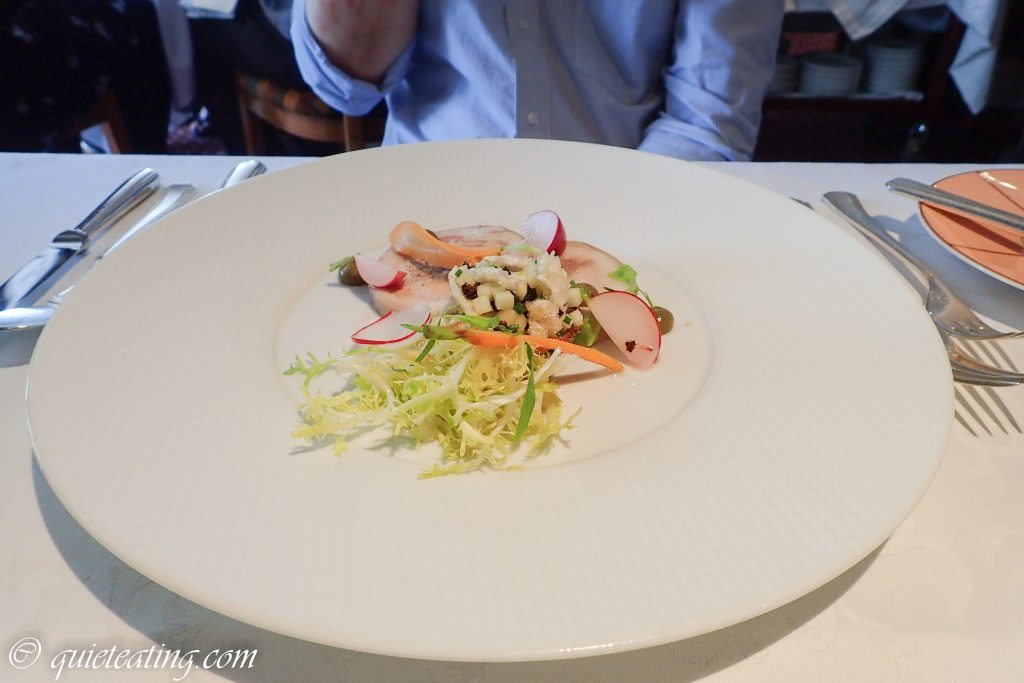 Rolled pig’s head with tarragon, puree of capers and sultanas, pickled spring baby  vegetables.  In typical fashion, we decided to go for completely opposite dishes so we could sample as much as humanely possible.  Delicately flavoured, in this dish we could easily taste the individual notes of the meat and vegetables unimpeded by heavy sauces.  An unexpected introduction to fine French food, which I had previously thought of as customarily swimming more in cream and sauces. 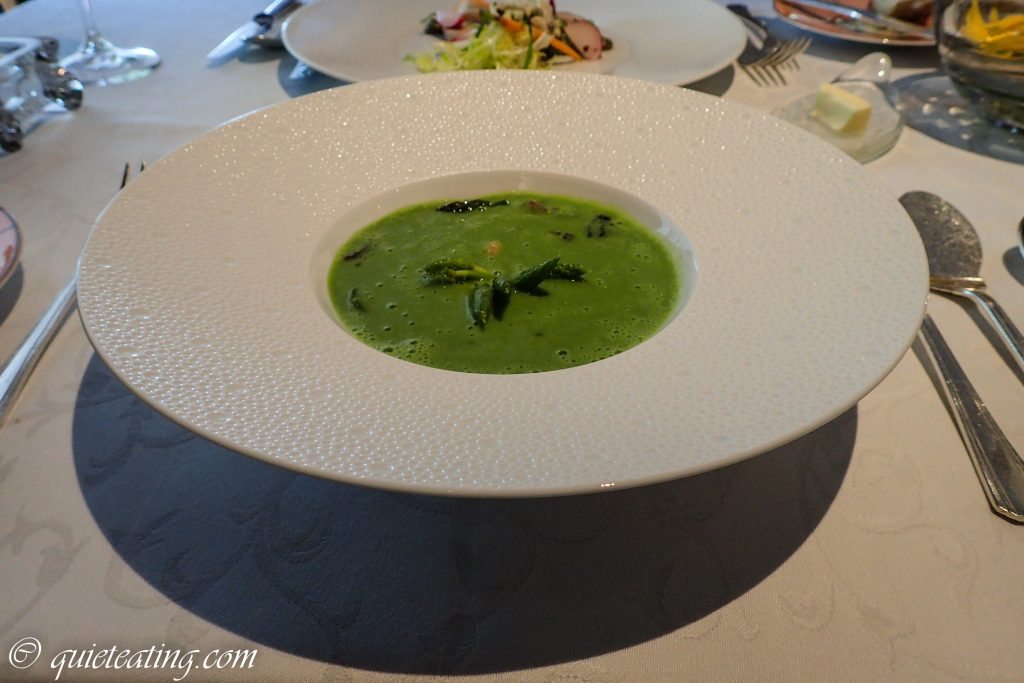 Asparagus soup served with morel mushrooms and tiger prawn.  This appetizer had a more full body with notes of mushrooms and asparagus melding together to complement the excellent prawns.  The prawns were so excellently cooked  and large that I mistakenly took them for some type of baby lobster.  If only all prawns were cooked like this. 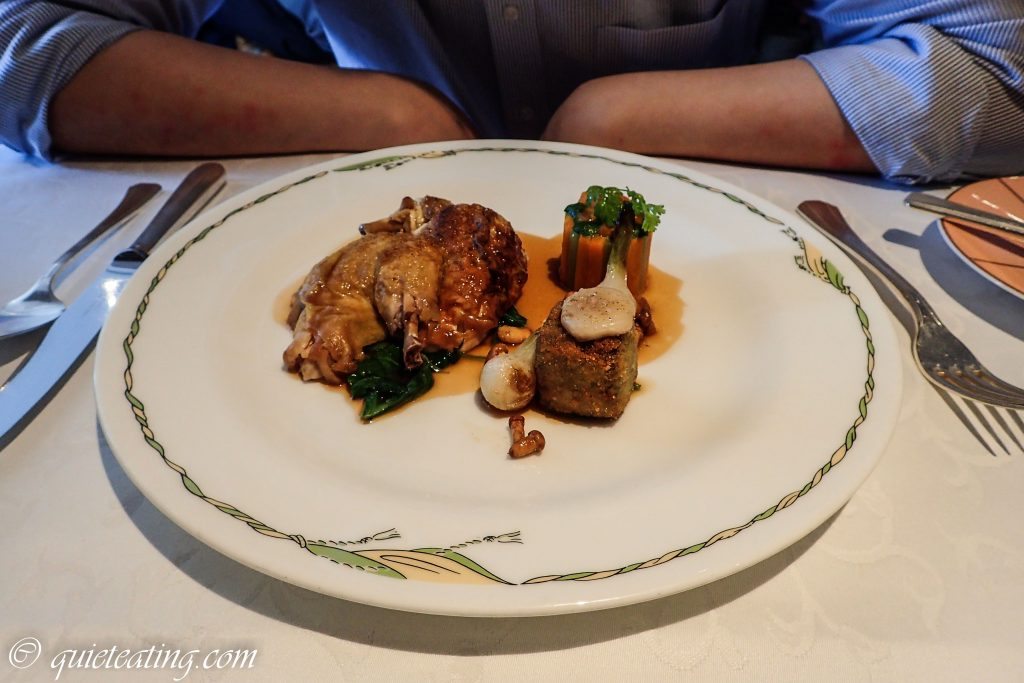 Roasted poussin with herb butter, kromesky fritter of marrow and wild mushrooms, carrot and spinach subric, “vin jaune” flavoured sauce.  Chicken with a carrot tower.  Set out on the dish almost as a work of art, it tasted like eating a masterpiece with flavours balanced just right.  The meatiness of the chicken, the silkiness of the sauce, the clean taste of the vegetables, what more is there to ask of a dish?  Actually, that is a rhetorical question.  I would just ask for more. 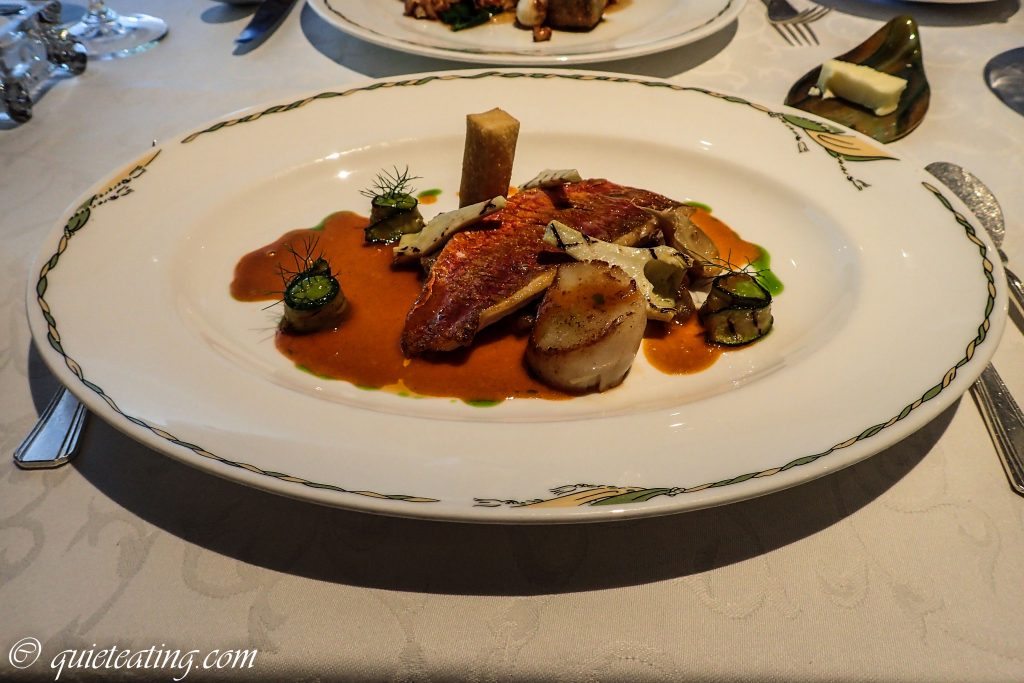 Pan fried red mullet and scallop served on aubergine caviar, grilled vegetables and reduced jus flavoured with sweet piquillo peppers.  The scallop was big, juicy and succulent.  The aubergine caviar and grilled vegetables daintily presented.  All of this only highlighted the mullet.  This is the best cooked fish I had ever had.  Perfectly cooked (I know that word is overused in food blogging but I use it in it’s true meaning here, i.e. something that cannot be bettered) with crispy skin and succulent meaty essence, this is something worth waiting for. 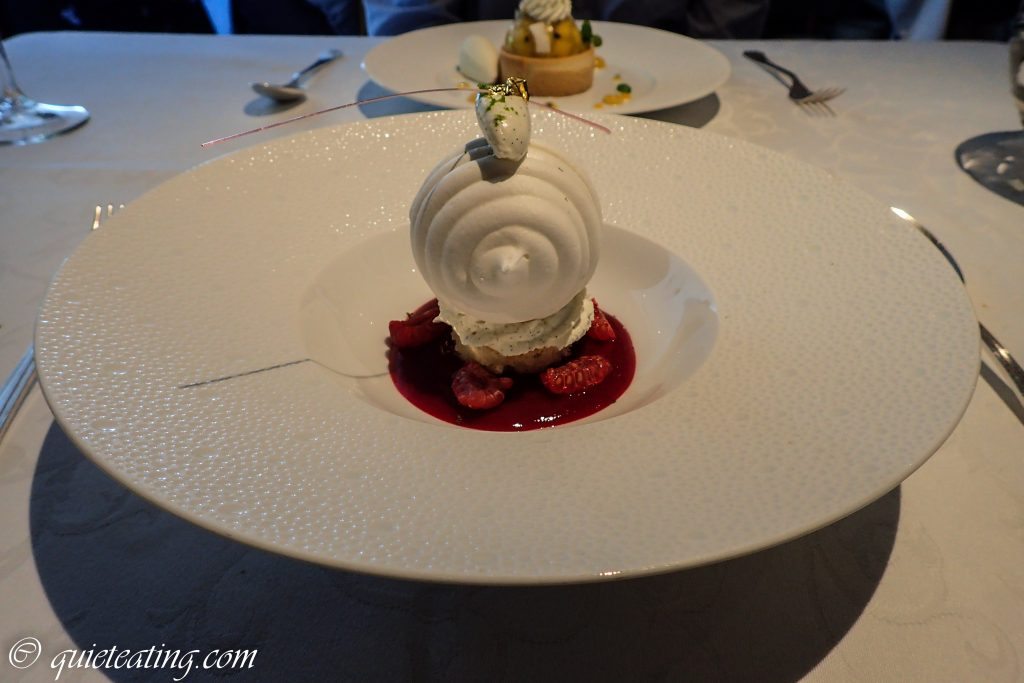 Vacherin dessert with makrut lime flavoured raspberry sorbet and tonka bean scented ice cream.  Inside this shell was emplaced the two different sorbets.  I say emplaced here as I have no idea how they managed to get the sorbet inside without squishing the outside.  Crunchy yet airy, sweet yet tangy, cold yet soothing, this was dessert at its very best. 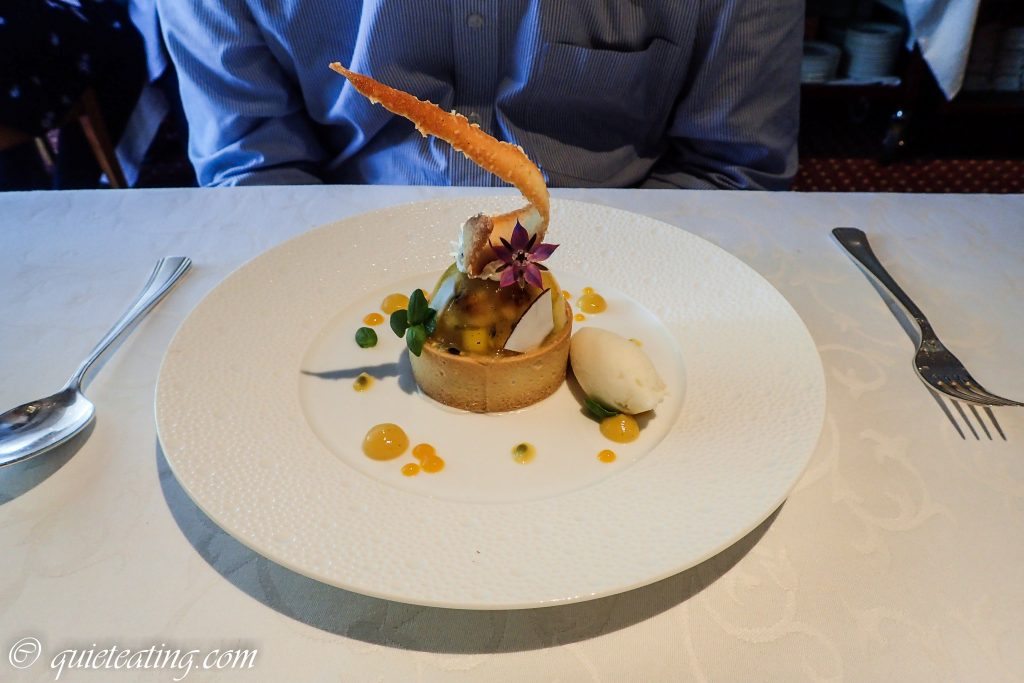 Coconut milk flavoured rice pudding served with shortbread biscuit and a delicate jelly of exotic fruit, pina colada sorbet.  My friend declared that this was the best rice pudding he had ever had.  I was inclined to agree.  With a delicately balanced flavour with tart, sweet, crunchy and downy, just like the other dessert, this was simply extraordinary.

The most welcome surprise was when we were offered the opportunity to relocate to the waterside quay overlooking the river.  Enjoying our delectable collection of petit fours while listening to the ducks quack. 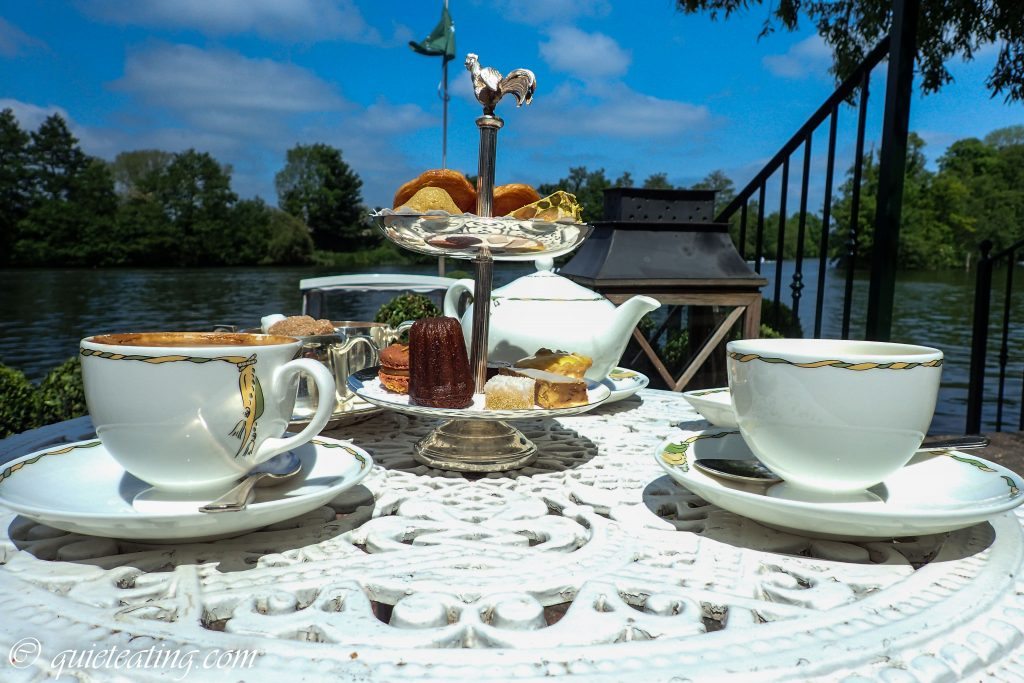 Tea, coffee and petit fours (10!) while sitting next to the river and overlooking a ride.  A very civilized way to end the meal.  Sipping tea, coffee and delicious little treats ranging from miniature rum baba, a macaroon, something resembling turron, raspberry tarts, nougat, a madeleine, another palmier, a two-layer Turkish delight, lemon custard tart, and a chocolate square with Alain Roux’s name on it while watching the ducks frolic in the river.  The little finishers were exactly that.  An exemplary way to end an eye-opening meal.  By the end, I felt like joining the ducks in the water happily coasting through the water. All is right with the world when you eat this well. 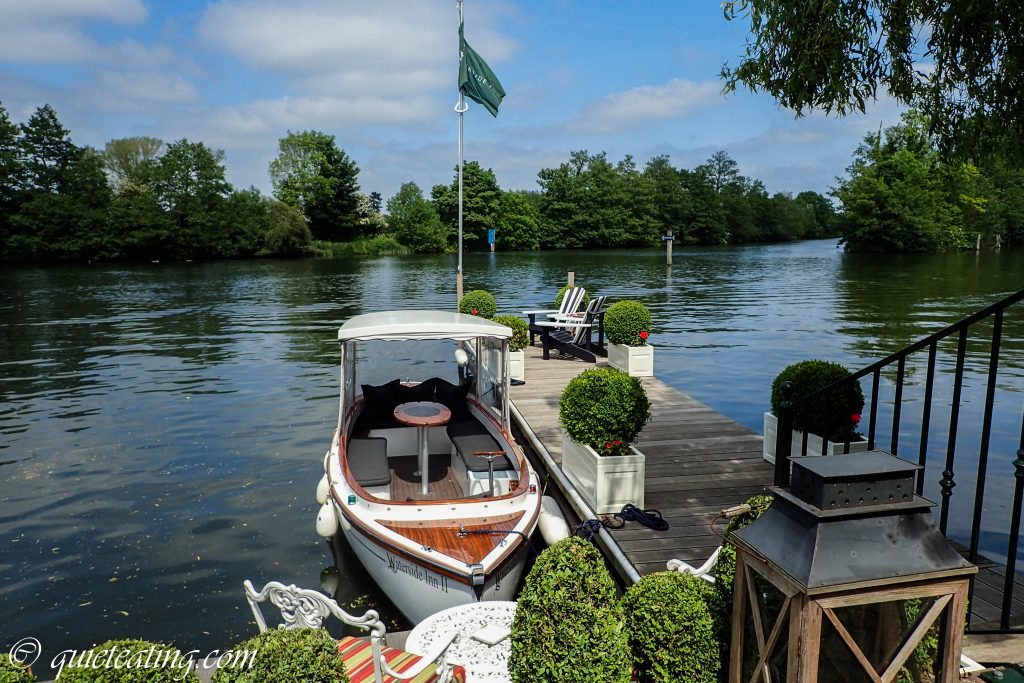 If you want to enjoy the pleasures of the water without wetting your feet there is help at hand.  How about a trip on the Waterside Inn 2 for a superb finish to  an excellent day.  They really do think of everything.

Although I have had more innovative and pleasantly surprising food or more  amusing encounters with the waiting staff, the Waterside Inn wins hands down for supplying the whole package.  With unobtrusive but attentive staff (that supplied a second set of cutlery so we could taste each other’s dishes without a word said), an excellent quality of food in keeping with the pedigree (they are the longest serving holders of a triple star in the UK) and an excellent atmosphere (with the floor to ceiling windows looking out on to the calm waters), I cannot help but feel our journey was jusitifed.  Although, maybe next time we could skip the trek and arrive in style on the Waterside Inn 2.

Lunch (3 courses) was GBP80 including service, coffee or tea but excluding a ride in the boat.