After the rather inept opening of Market Hall Canary Wharf, I needed a bit of persuading to try another indoor food market (collective eating) environment.

Market Hall Canary Wharf marketed itself heavily, yet when I arrived on opening day, they kept me waiting for 30 minutes as they said they were “not ready”.  They then decided to announce that they were not opening for the rest of the day.  Could have told me that at the start.

As a result, I stalked off in a rather irritated mood as I had forgone my divine food at home (curry and rice) as I was lured out with the promise of something better.  Although I should have worn something other than rubber shoes to create more commotion as soft soled shoes aren’t good for stomping away in a huff. 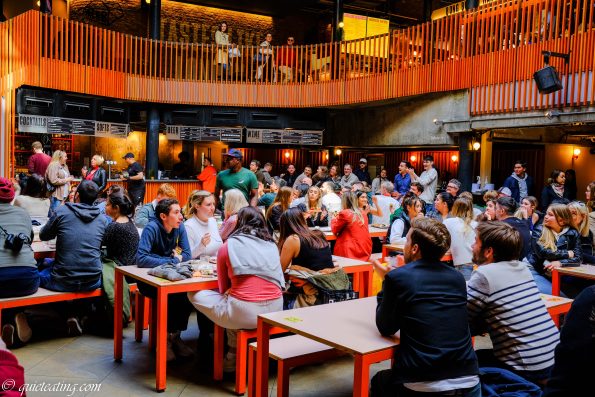 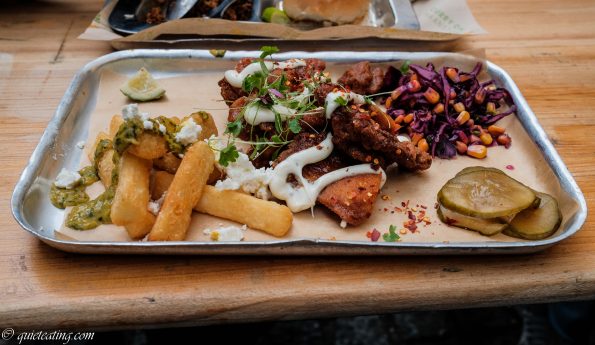 Fried chicken and fries, boneless chicken thighs in a guava glaze with habanero mayo served with yuca fries, charred cornslaw, pickles and cheese – El Pollante.  The pickles and salad were decent.  Meaty and not slathered with too much sauce.  The yuca fries were excellent with a firmer, meatier taste than potato.  The chicken was great.  Crispy, succulent and moreish, I wanted more.  Problem being that I had to wait about 20 minutes for this “fast food”, so even if I was tempted to go another round, if I was hungry, I might faint while waiting. 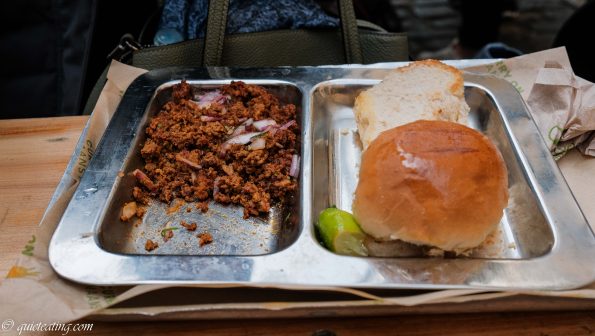 Keema pav, rich minced lamb curry served with warm pav bread from Curryonnaanstop.  Forgivingthesquashedname the less than ideal presentation (looks like a prison tray) belied the rather tasty curry with fresh grilled bread buns.  Although I was skeptical at first as it looked somewhat like a dog’s dinner, especially served on metal plates, the curry had a strong but not unpleasant lamb taste and was not over salted.  The bread, although you may think otherwise from the photos, was lightly toasted and crunchy.

So the two stores I tried today were ones to come back to.  Although in the case of El Pollante maybe not that soon as they fix up their queuing problem. From the number of customers, Seven Dials market could show Market Hall Canary Wharf a thing or two.

As Seven Dials Market offers a myriad of other choices for dining, my previous review being of Bong Bong Minala Kanteen, I have separated out the scores and costs below.

Curryonnaanstop
A quiet eating 7.5/10.
Curry and bread was GBP9 excluding drinks and service.

Individual stores in the market: