I have a bit of a thing for crockery as you might have figured out. 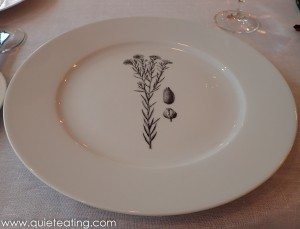 So I couldn’t help but admire the plate setting at the table.  Simply exquisite!

I tend to base my expectations of a restaurant on 1. the plate setting and 2. the bread.  I find that if a restaurant is willing to pay attention to the small things then it is usually a good sign.  Just like shoes (and especially their condition) when on a professional really seem to tell a story. At least, before you get to know them better. After all, would you trust a lawyer whose shoes looked like he got them from a dumpster?  Or for that matter, a cook whose attire was filthy. 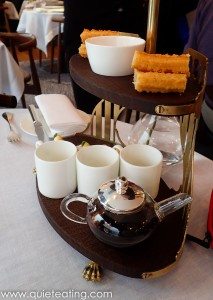 I have to give the restaurant 5 stars for presentation.  These are the amuse bouches.  Nicely arranged like it was a tea service. 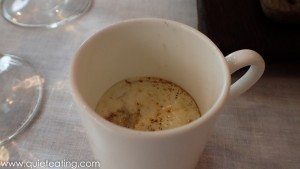 A mushroom steamed custard (I think?) with mushroom soup.  The soup is in that teapot you see above.  Not bad but we all found it a bit too salty.  Not enough to detract from the total experience significnatly. 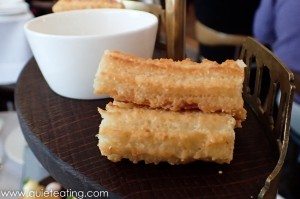 Churros.  I love churros.  What’s not to like about deep fried dough?  But instead of the usual chocolate dipping sauce, you had a truffle paste you could elect to add to these which lent a very strong pleasant truffle taste. 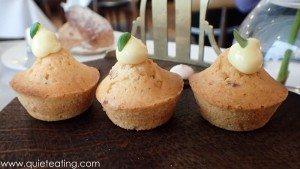 Madeleines with some type of seafood cream on top.  Sorry, I wasn’t (as usual) paying attention when the waiter explained what these were.  I was later to regret this as my fellow diners and myself racked our brains and tongues trying to figure out what these were as they were just so good. 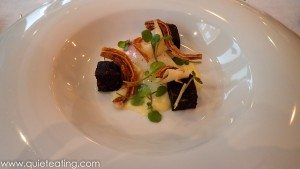 Egg with pig’s ears and black pudding.  I usually avoid black pudding like it has some infectious element because of its often cloying and overpowering aftertaste.  However, the blood pudding, when combined with the delightful crispiness of the pig’s ears, went well. 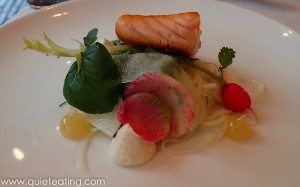 Salmon with kohlrabi and oyster creme fraiche.  The dish first came without the salmon as it was lurking in a nearby box, hidden by the waiter. My fellow diner had such a forlorn look when he saw the salad (he loves meat and seafood) that my other friend almost laughed at him.  Although, luckily with a perhaps unnecessary flourish, the fish arrived in its own separate box.  The star of this show had to be the oyster creme fraiche.  A light but not overpowering taste of the sea. 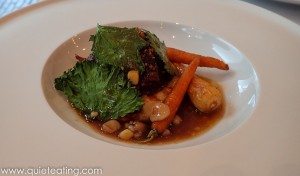 Having finished with the starters, it was time for the main courses.  Ox cheek with parsnips, turnip tops and potato mash.  The ox cheek was perfectly cooked, achieving that flaky consistency like well cooked salmon with the full meatiness of an ox.  The turnip tops were an inspired choice to add some colour to this dish. 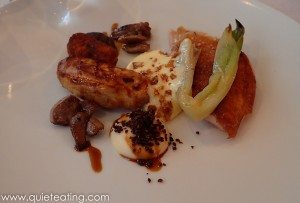 Guinea fowl with baked celeriac and onions.  I went instead for the guinea fowl.  On the reasoning that I don’t often engage in consumption of fowl.  A more exotic meat for me.  I had my doubts about whether this might be too dry but I need not have worried.   I did really love the mushrooms and the celeriac as they provided a pleasing counterpart to the avian taste of the fowl. 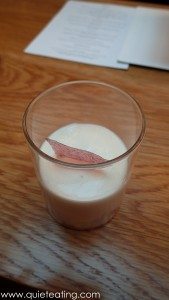 Muscadine grape jelly with foam.  A little pre-dessert surprise!  I do love surprises in my food.  I thought that the foam, as foams are, was full of air.  Too much I think in this case as it seemed like swallowing gas.  The jelly on the bottom though was rich and creamy. 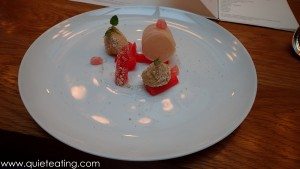 Rhubarb wrapped ginger beer granita and white chocolate mousse.  Now, I usually hate rhubarb.  I think I can pinpoint this to an incident when I was younger and I had to bite on to rhubarb flavoured jelly to create a mold of my teeth at the dentist.  I then promptly threw up.  The rhubarb, although not leading to any unfortunate side effects this time, just wasn’t really to my taste.  But I think that may just be me.  The white chocolate mousse on the other hand was delightful. 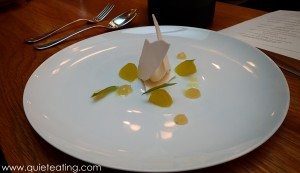 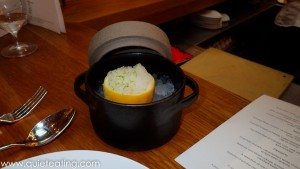 With shiso sorbet .  An interesting clean taste but again I prefer creamier desserts, so not really for me.  Good thing it was my fellow diner (otherwise known sometimes as the garbage cleaner) who had this dish.  A picky garbage cleaner though, as he will turn his nose up at things that he doesn’t like or which are not cooked well.  So given the speed which he devoured this, it must have been good. 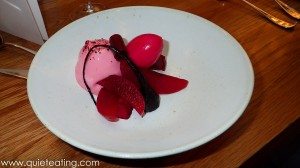 Beetroot and blood orange sorbet with candied apple and beetroot.  I must congratulate Pollen Street Social here.  They had the two things on the set lunch dessert (the apple parfait was on the a la carte menu) which I detest.  As you guessed, beetroot is the second.  Again, although it was undoubtedly good, I just didn’t have the stomach to really taste this. 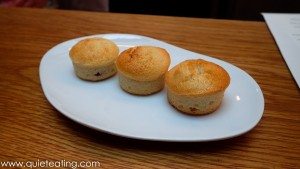 Off to the petit fours.  Madeleines.  As delightful as the amuse bouche versions except sweet now rather than savoury. 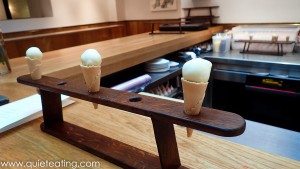 Ice cream!  In this cone, is hidden some jam.  Which went well with the white chocolate coated ice cream.  I was tempted to pick up one of these balls and lob it at my fellow diners.  But that would mean that I wouldn’t get to eat it and it would be a shame to waste such a special dessert, even with my vaguely psychopathic tendencies. 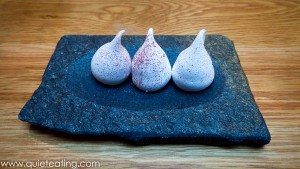 Last up, some marshmallow-like items. Sorry, I am sure that they have a proper name but given my sometime anti-social behavior I must have missed it when the waiter extolled its virtues.  A pleasant light end to the meal.

A pleasing lunch with lots of little extras and surprises.  Pollen Street Social lived up to my premonitions, although maybe there I had the bread to help me.  I was most impressed with the innovative amuse bouches and petit fours, less so with the dessert, although in all fairness, maybe that is because of my personal tastes.  In the end, although it was one of the pricier one Michelin star restaurants I visited, I felt that it was interesting enough to merit a return.