Brunch seems to be a pivotal part of the weekend ritual.  To a brunch heathen like me, it seemed nonsensical that its absence bespoke a critical defect in humanity. Seemingly excessive inebriation, bodily harm or extreme extrusion of liquids were not justifiable reasons to miss it. It seems to have attained almost quasi-religious status among the millennial generation.

I understood that it is a time to kick back, enjoy avocado green juice, bottomless alcoholic beverages and heady pancakes.  Although the older generation might scoff at their wanton use of available funds on seeming frivolities, I think there is something (being of a not old generation myself) else going on.  When you seemingly have a lower standard of living than the ones that went before, you need something to cheer yourself up.  Perhaps brunch can fill this void and bring a bit of affordable luxury to life.  At least that’s what I tell myself when I pass by elegant front porches, stealing glimpses into grand dining rooms and mooning over expensive cars parked on the road.  A hazard which is particularly pronounced in West Hampstead.

With such surroundings, my expectation was that there would be good food to be found here.  This is how we found ourselves in a Korean/western fusion restaurant just off the high street. 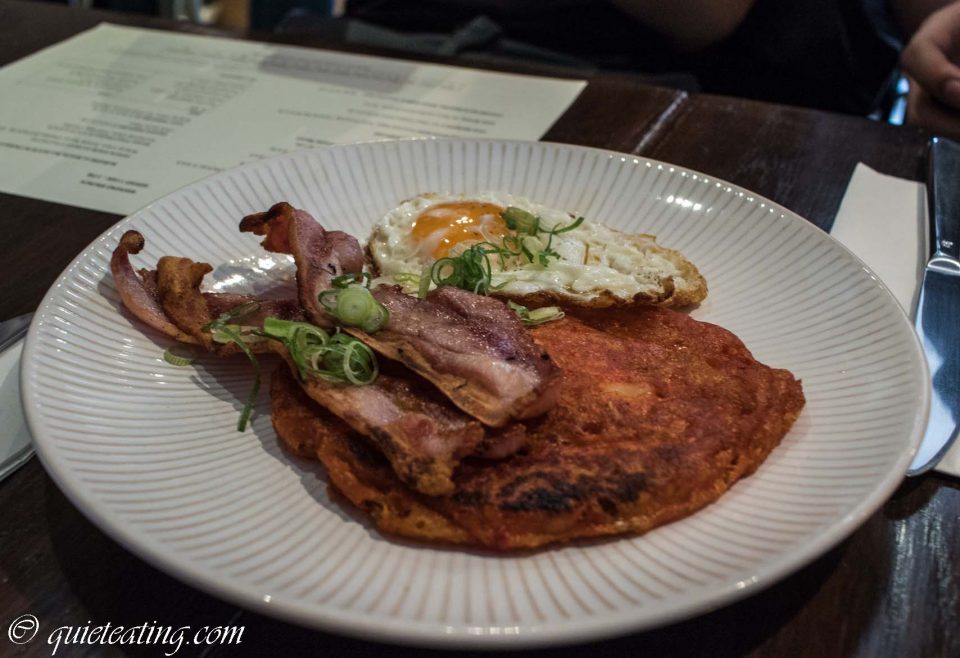 Kimchi-Jeon, Fried egg, Bacon.  An excellent combination with the salty and tasty Korean pancake with bacon and egg on the side was inspired.  I quickly stuffed this into my face and then wondered greedily if there was more. 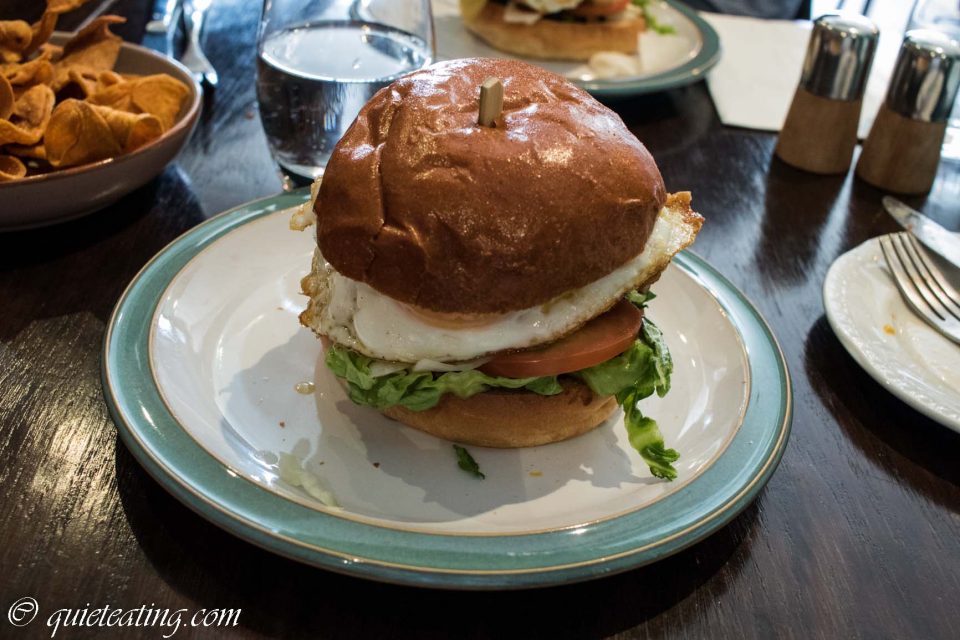 Korean Fried Chicken Burger, Gochujang Sesame Sauce, Fried Egg.  I am a sucker for KFC (Korean Fried Chicken, not Kentucky Fried Chicken, although I love the latter too).  Placed as a patty in a burger was an interesting decision.  The chicken was juicy, moist (no chicken breast here) and carefully coated in a spicy and tangy Gochujang sauce with egg on top.  A good dish, although if the chicken was available just by itself, I would have easily gorged myself on a bucket of just that. 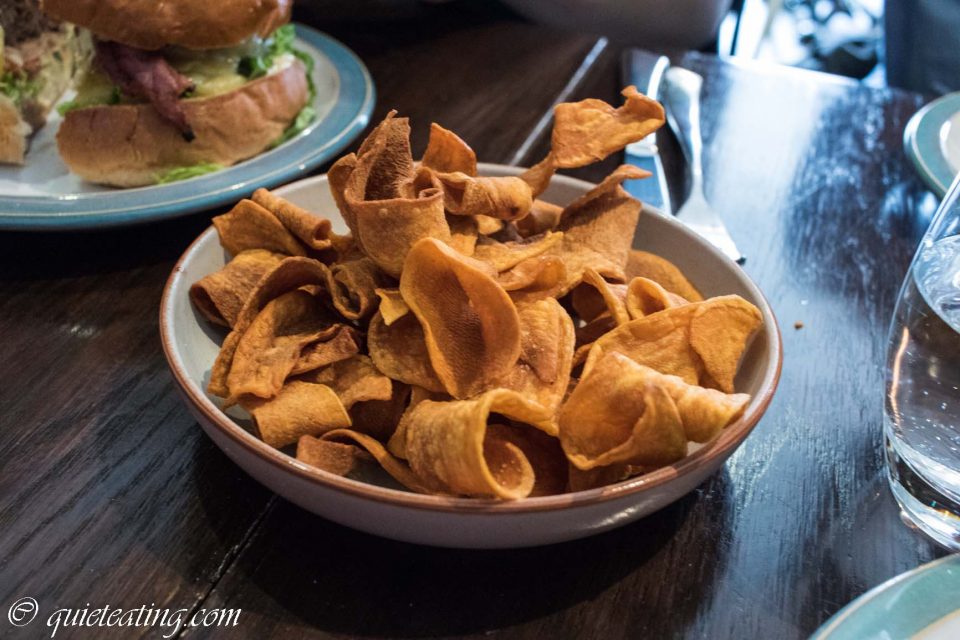 Sweet Potato Crisps.  Unfortunately, there was some disappointment in store.  As much as I like potato chips, if they come from the bag (which they tasted like) and you charge a pretty penny for these (ok, £2.50 wasn’t that bad), I would hope that they go through some type of taste or texture enhancing process.  Sadly, these just tasted like they had come out of a packet. 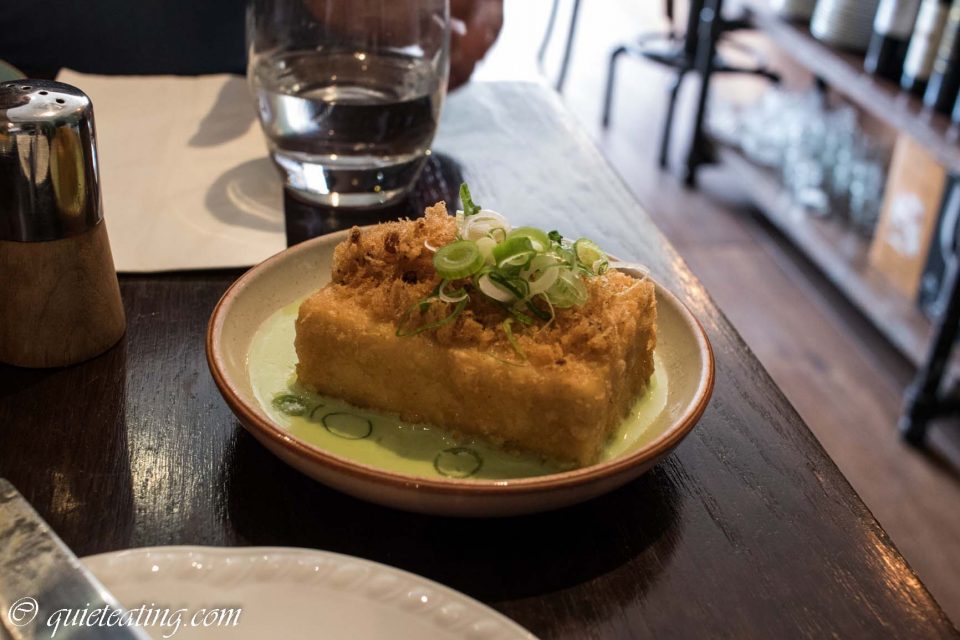 Tofu Tempura, Green Chilli Sauce.  The tempura batter was great, the sauce delicious, the tofu a bit plain and lacking in firmness as it fell apart.  Could have done with some more stiffening by way of the batter.  Would have tasted better too.  Then again, the same could be said of some leaders of the free world.

Brunch can make most things better.  Sometimes, it even makes the nonsensical games being played by politicians (even when things blow up in their faces) seem less terrible.  Especially, when such a morning meal includes the guilty pleasure of pancakes with kimchi.  Even if some of the other dishes could do with a bit of a tweak to bring this meal further, it was fair cop for the area.  Then same can’t be said when you are playing Russian roulette with the fate of a country.