Children say the most interesting things.  That was my thought as I overheard, from my vantage point a metre or so up, a conversation between two little girls.  There is something endearing about their lack of propriety and awareness.

They were ogling fish in a fish pond at a friend’s place while everyone else was enjoying a BBQ.  The fish were calmly swimming back and forth while above their heads a serious 5 year old discussion was occurring.  They discussed their own experience of fish, how they looked hungry. How in times gone by, they had their own, especially a blue one. How that one was oh so pretty.
So much so that they couldn’t deny it anything.  With its rigid open mouthed fish stare, it constantly seemed to beseech them for food.  So in their kindness they decided to feed it when the parents weren’t looking.  But after a handful it did not seem like its hunger had abated.  So they fed it again.  Again, there was no change.  So they gave it some more.  After a few rounds of this, it rotated to an unnatural orientation.  As one of these young ladies authoritatively explained to me now that she noted I was eavesdropping, “we fed it too much and it died”.
When the fish owner noticed their interest in his fishes, he kindly offered to grab them some food so they could feed the fish. However when he was warned by another adult of the history of these two girls, he thought to temper his offer.  Perhaps just a little then.
This story is not as random as you might otherwise think as my visit the very next day was to a body of water with a nice cafe on the side. 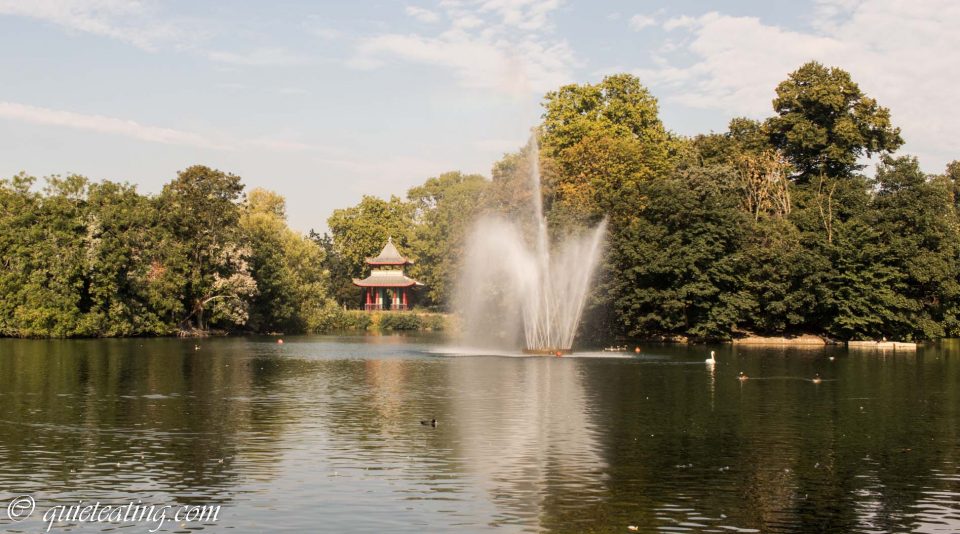 Victoria Park.  Complete with random oriental pagoda behind the fountain and the idly paddling swans.  A very peaceful place to start the day. 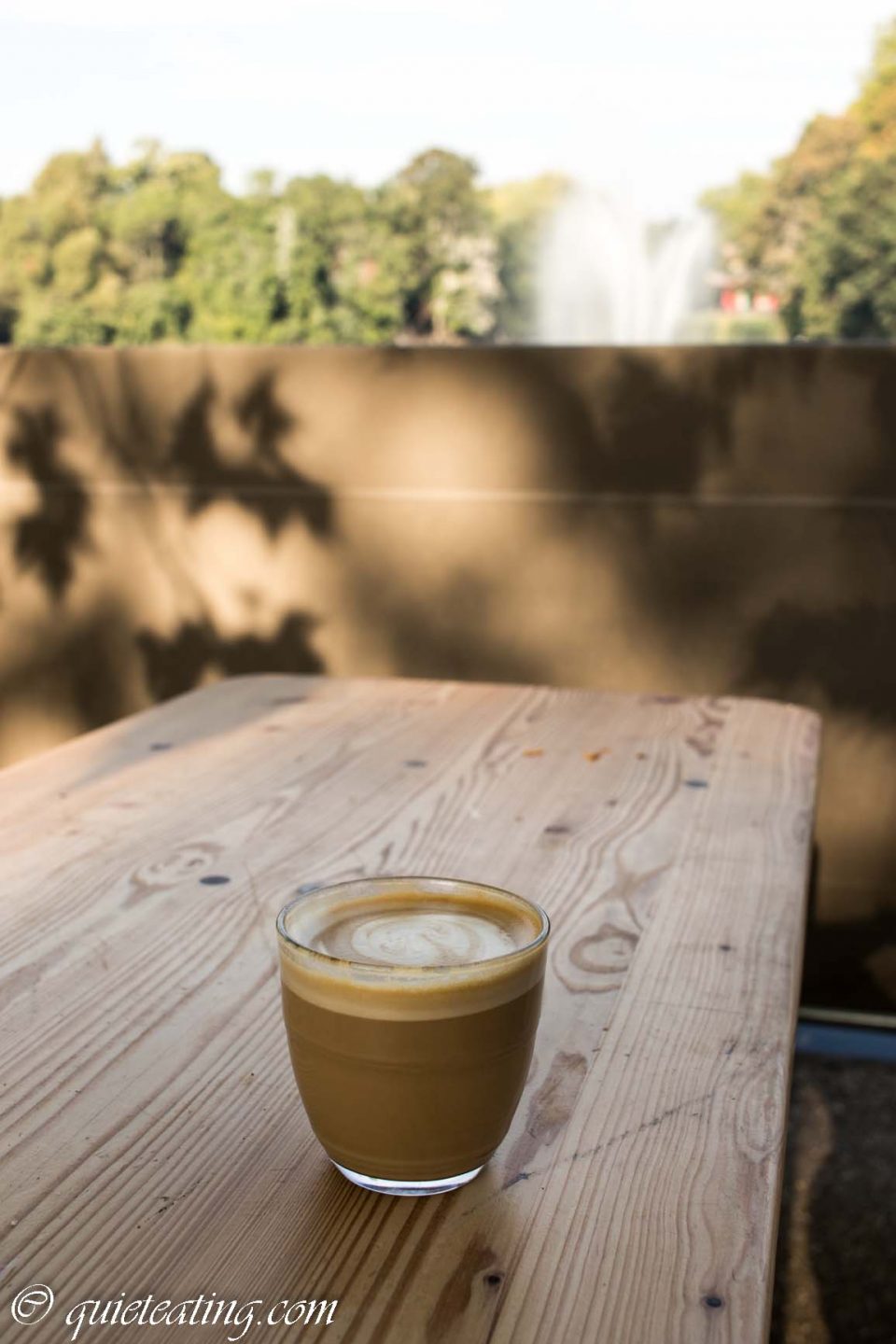 Latte.  In a small happy cup, this was pleasant.  It was clear that the staff were careful to avoid the unforgivable sin of burning their coffees like many chains I have had the misfortune of trying.  Sitting down with coffee overlooking the lake, I can think of few better ways to spend an early Sunday morning. 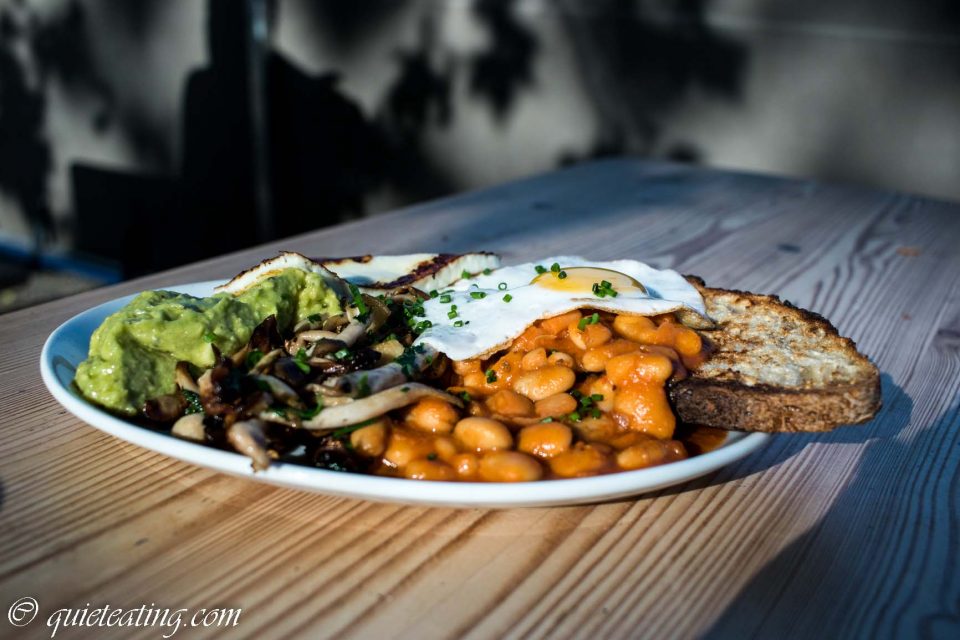 Veggie, avocado, home cooked beans, mushrooms, fried egg, halloumi and toast.  This was rather good.  The avocados were smooth and ripe, the mushrooms gently fried and seasoned, the butter beans complimented by gentle tomato sauce, the egg alright, the halloumi good and the bread excellent.  Altogether, this was a rather good vegetarian breakfast.  So having finished my eating, I returned to my book.  Unfortunately this was not to be for long.
There was one issue which detracted from the enjoyment.  The long communal benches were all set up perpendicular to the lake to maximise seating space.  However, a consequence of the efficient packing placement was that the tables (and more critically) the benches all encourage movement towards the water.  That is, they were all at an angle, so although I would have loved to sit here for longer, the cramp I was developing to stay level encouraged me to leave.  Then again, maybe this tilt is to encourage people to inadvertently feed the fishes.  In which case, maybe I should introduce the cafe owners to two little girls.
A quiet eating 8/10.
Breakfast (1 course) was GBP 10 excluding drinks and service.
Pavilion Cafe
Victoria Park, Old Ford Rd,
London E9 7DE