The good thing about being young is that things are only just starting.  There is so much more to come.

When I first started cooking, in desperate need of nourishment (I was a smaller man then), I was a rather ineffectual cook.  Luckily, my new British roommate was in possession of a particularly stoic personality and was happy to eat anything that I produced.  If I burned the chicken and said that was to bring out a hint of carbon, he would be great at pretending he believed me.  When I accidentally added a bit too much chilli to my dish and his eyes watered when he ate, he commended my authenticity.  When I set fire to the chair and it looked like a bomb had gone off in our kitchen and he kindly helped to mop/fix it all up, he said it would be great to get some fresh air and go to the local takeaway.

I explain this story not because this was to be a bad meal but to establish my credentials as many people complain that I don’t seem to understand contrast and perspective.  So what is high end Thai food like?  That’s where Patara steps in.  It starts with the drinks. 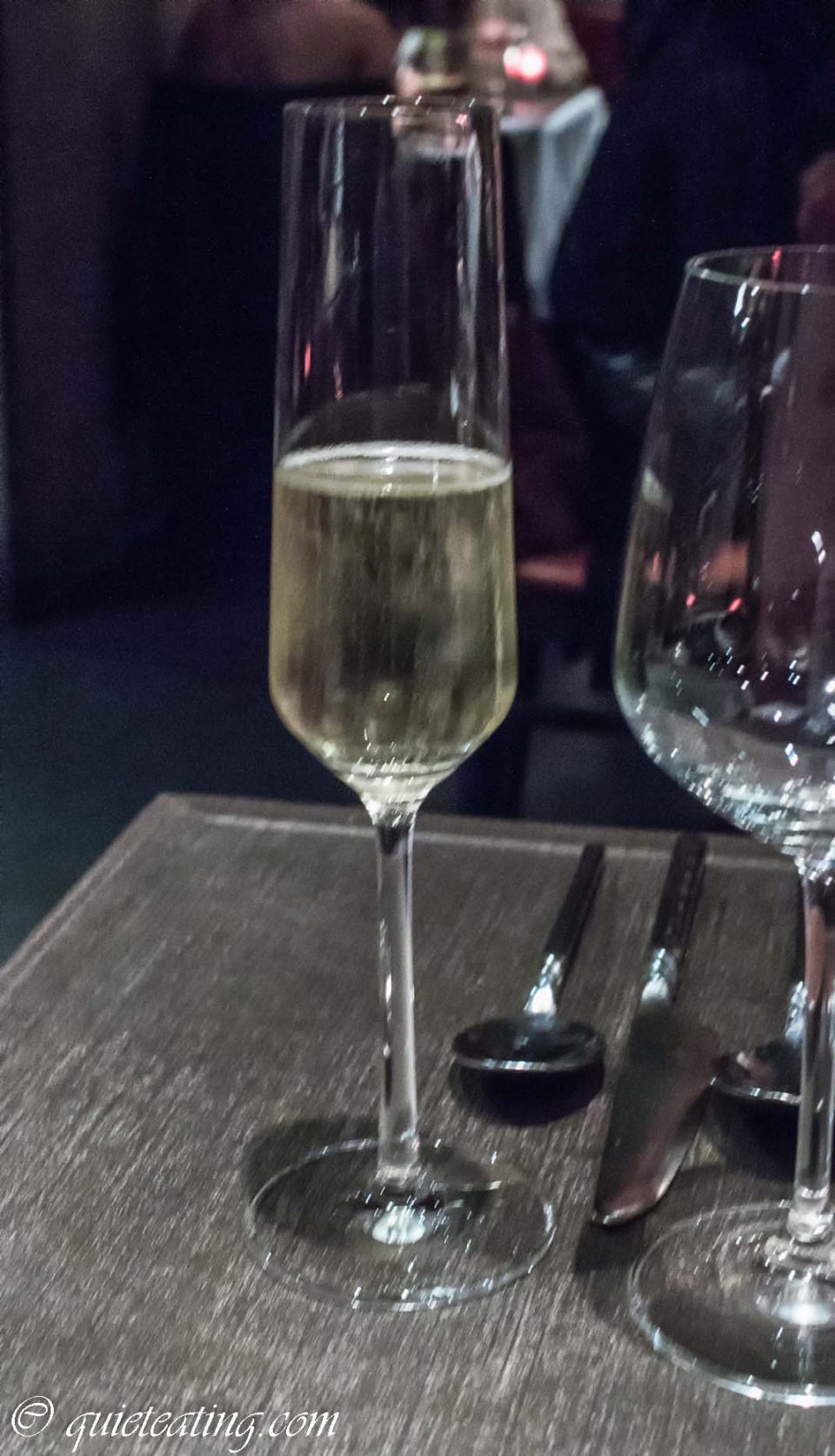 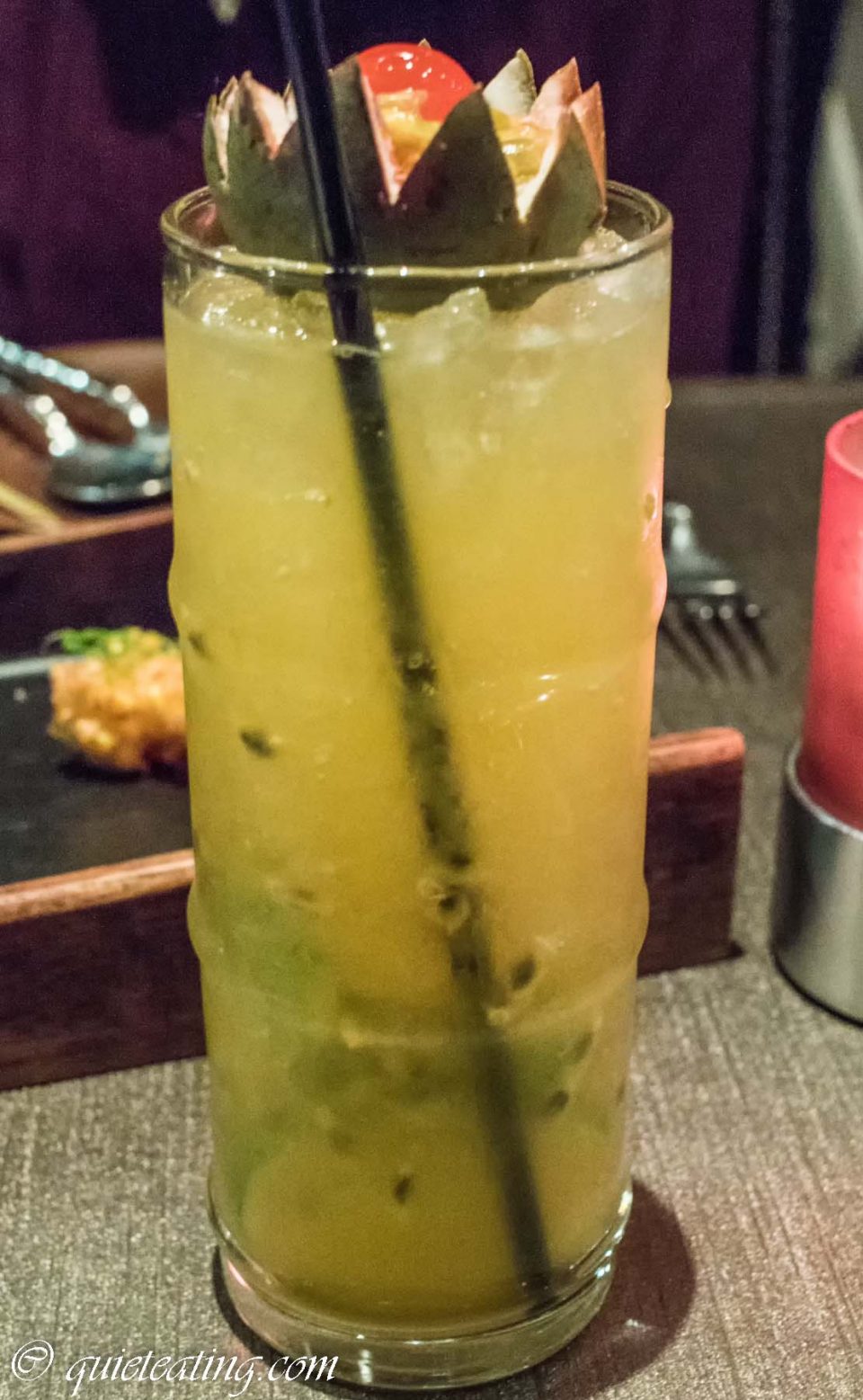 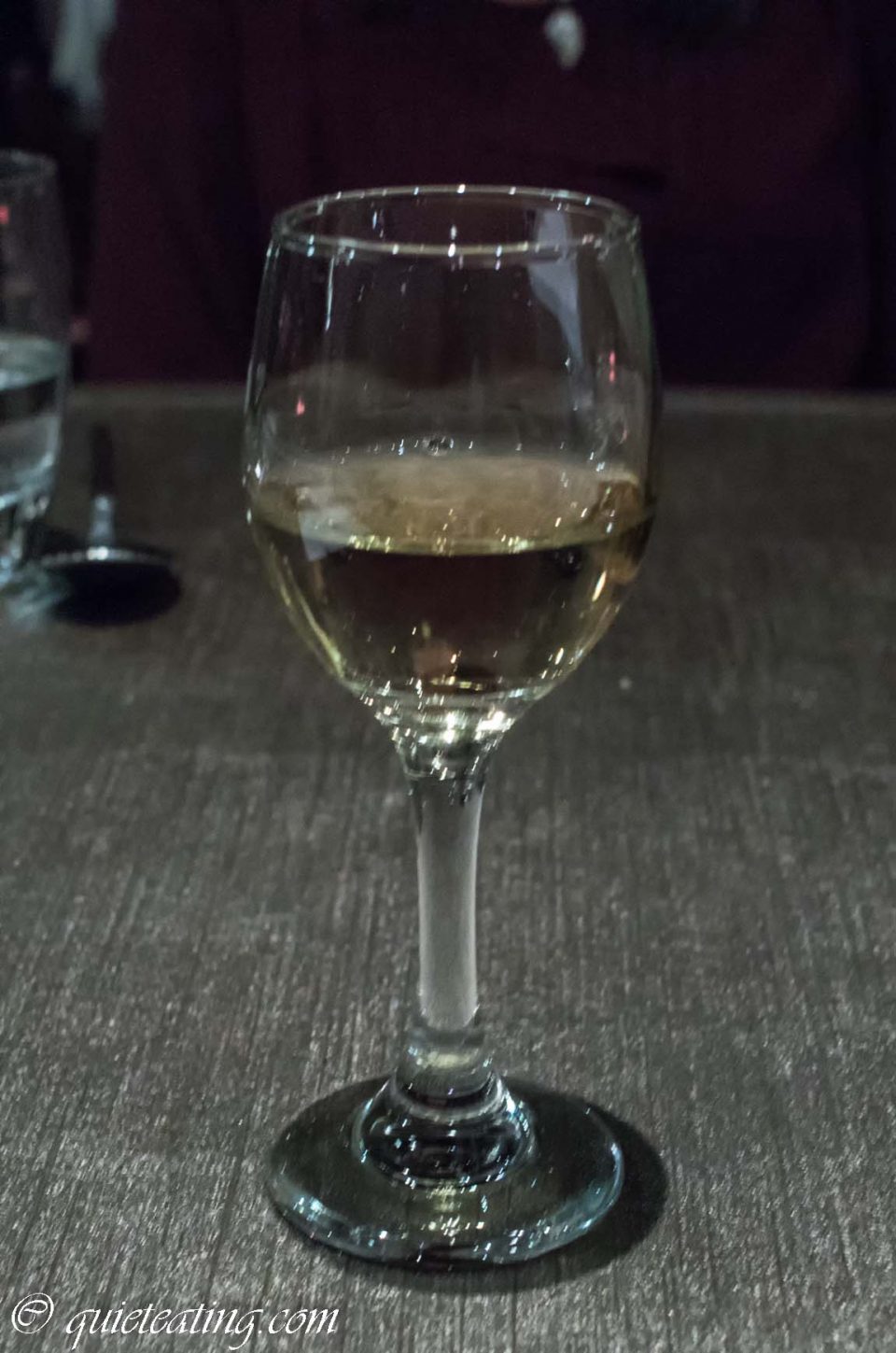 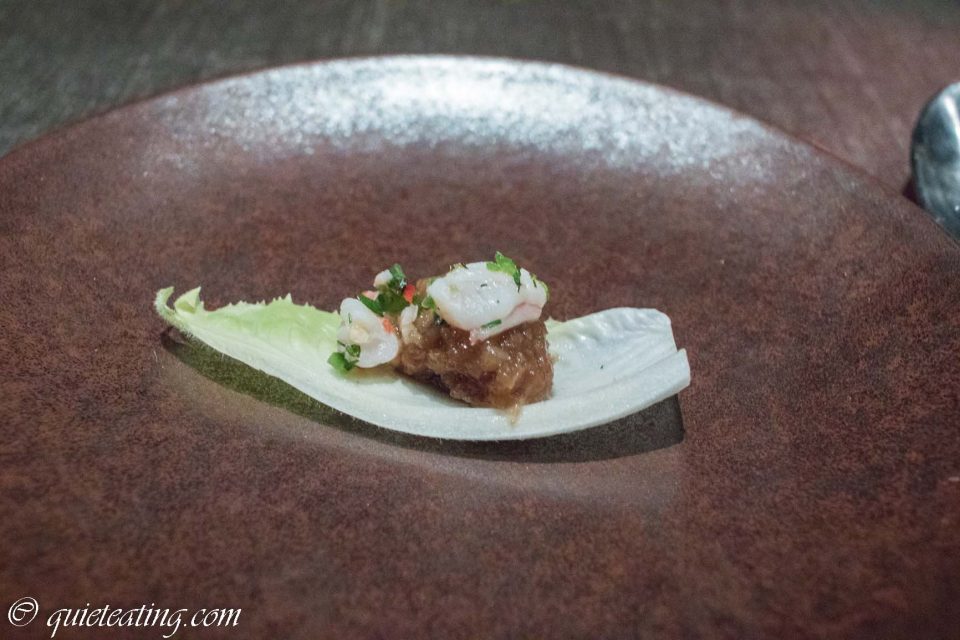 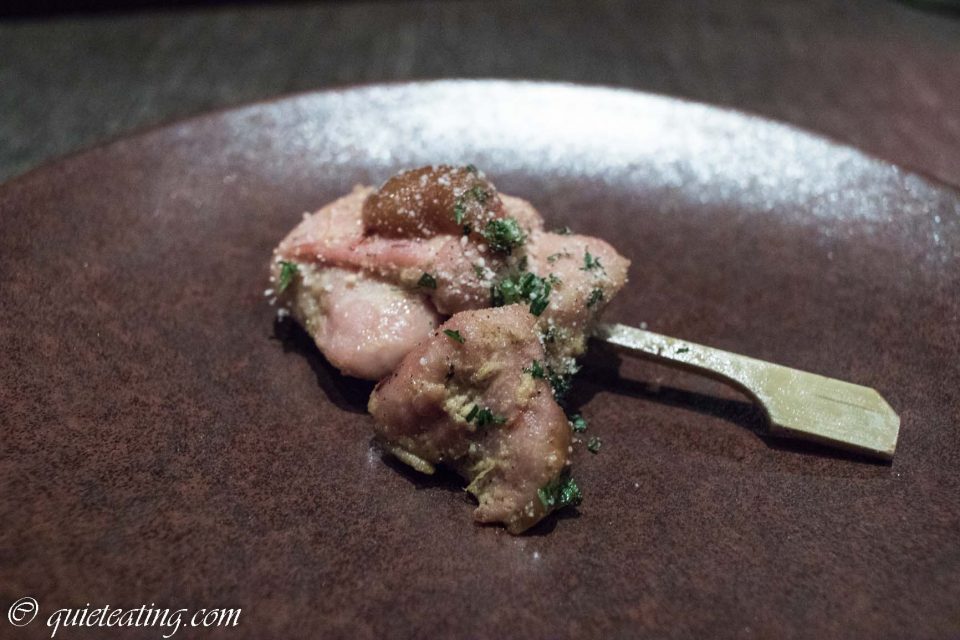 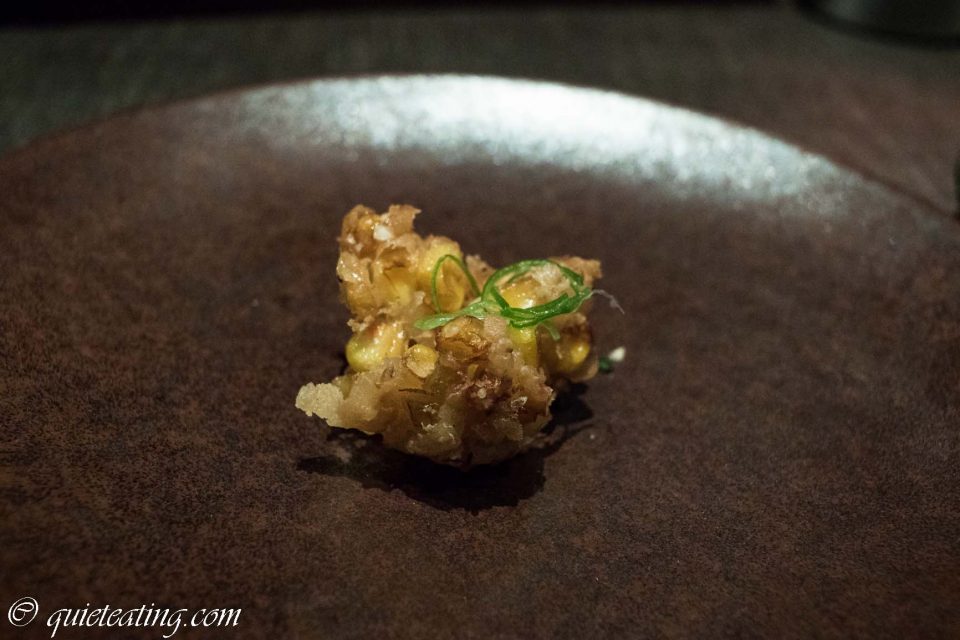 Caramelised prawn with cashew nut on endive leaves, grilled chicken with tamarind gel sauce and Thai popcorn cake with sweet chilli sauce. Amuse bouche of prawn on endives was an interesting mixture, clean and umami mixing together.  The popcorn cake, fried goodness with vegetables, a favourite of myself.  Yet it was the chicken which was great.  A little skewer of carefully prepared meat, it seemed to have been doused in some flavour enhancing tamarind gel which was particularly good when combined with its tenderness.  It was so tender that I wondered if the chicken had been subject to a Kobe-like treatment of daily massages. 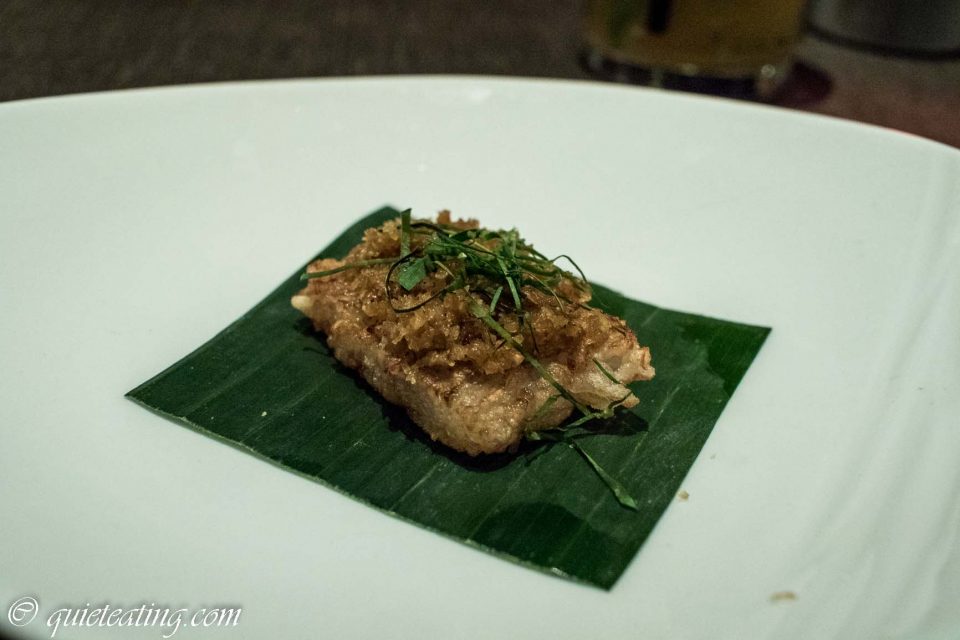 Coconut sticky rice and dried shrimp.  The rice had been prepared to take on the consistency of a wafer, the shrimp resting on top.  Crunchy and savoury, a nice bite.  Although if I have to be overly critical, I thought that there was a bit too much use of dried shrimp given what had gone before. 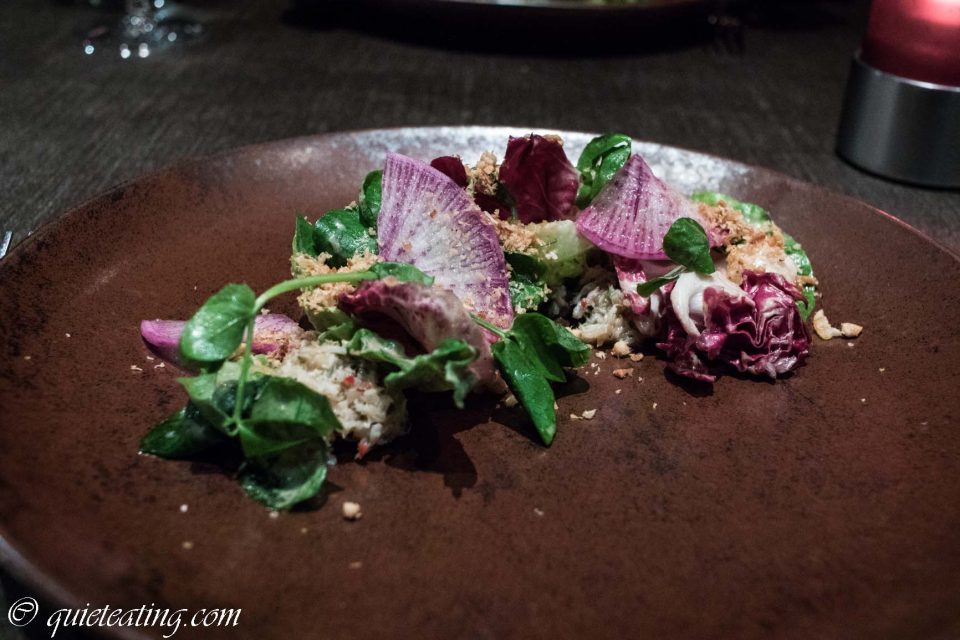 Thai royal style salad with blue swimmer crab.  A very pretty presentation belying a rather ordinary taste.  It wasn’t bad, just that it wasn’t that extraordinary.  May be something to give a miss if you had a choice. 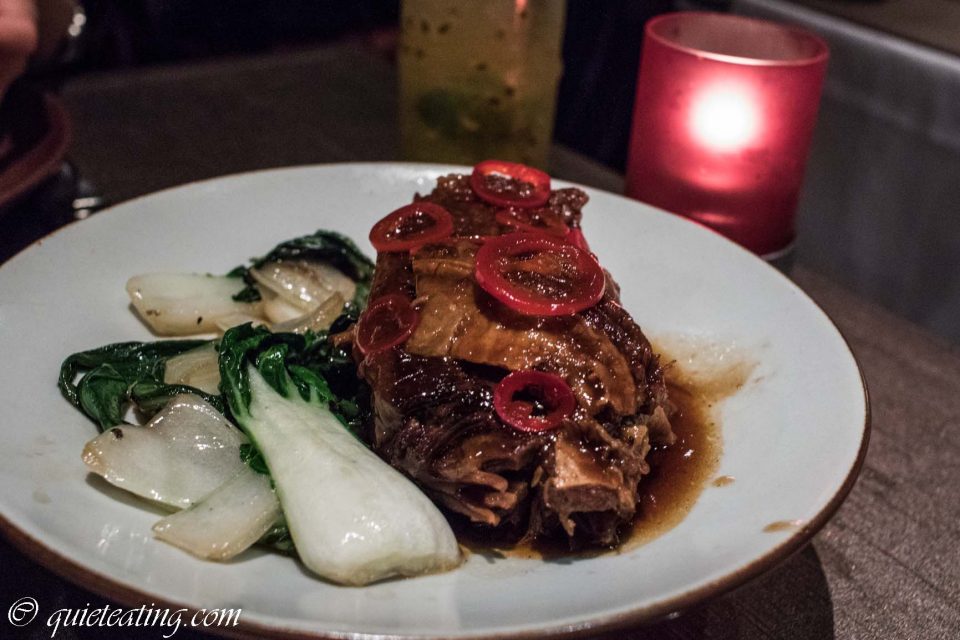 Beef short rib “Hong Style” with pickled chillies.  Delicious and tasty.   With firm but not mushy consistency (that’s what I am tempted to say about short and succinct speeches sometimes) and deep flavour, this was the preferred of the two mains.  With a side of plain bak choi to set off the richness of the beef, this was good.  However, I was slightly disappointed as it seemed to lack heat despite the display of copious amount of chilli bringing my hopes up. 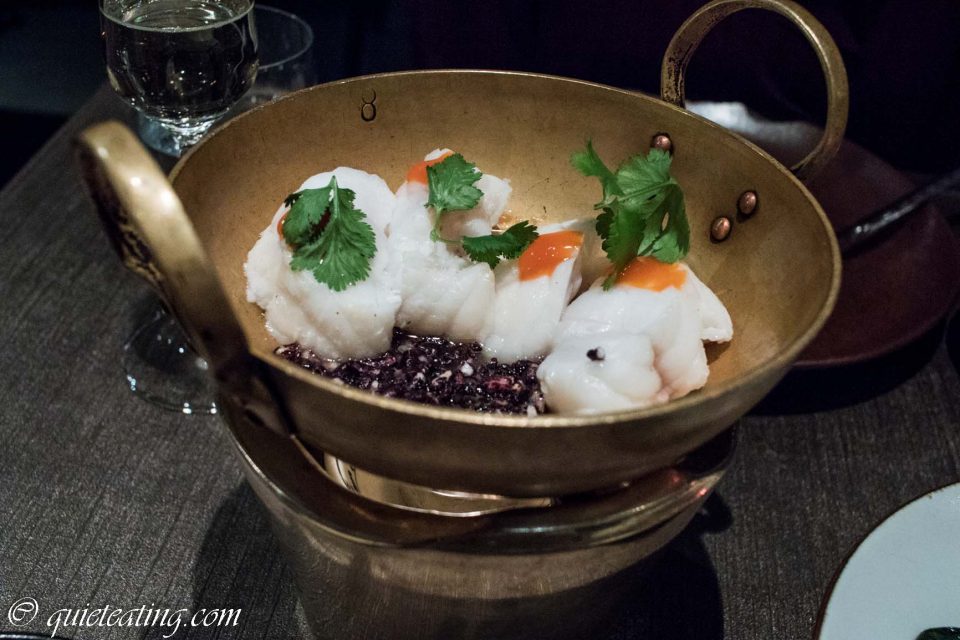 Poached monk fish “Khao Tam” with coriander root broth and soy bean sauce.  A light flavour in contrast with the short rib.  I think here is an example that I should have eaten things the other way around as perhaps it would have been better if I had not eaten the beef first.  Its delicate flavour was not bad although mostly lost on me in the heat of the moment. 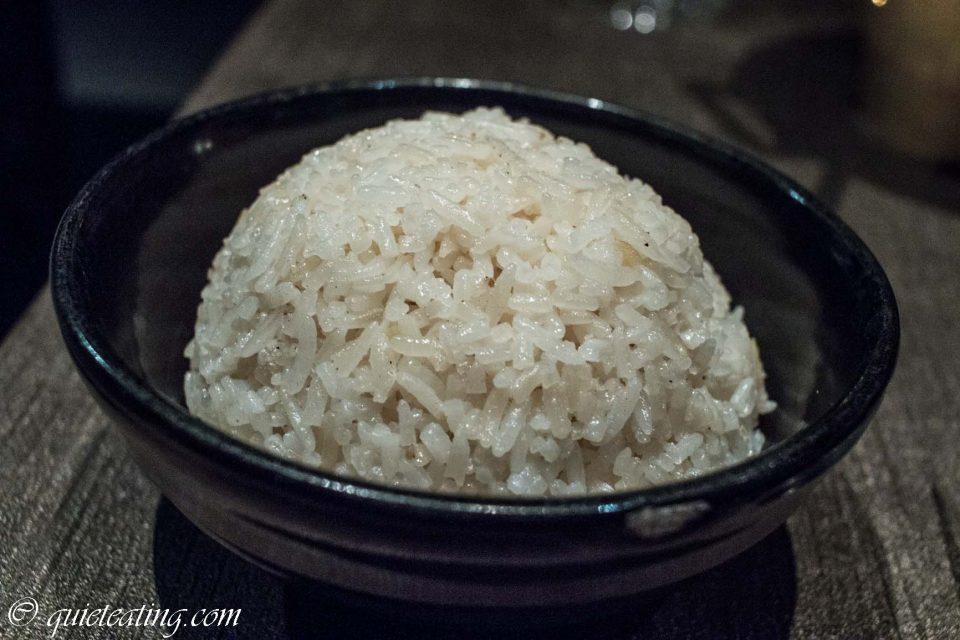 Jasmine rice.  I know that some people may note with exasperation my obsession with grains.  Rice and bread are very important to me, a good introduction with either/both is a promising sign of a good meal.  In which case, Patara certainly is a safe bet as the rice was nicely firm with a hint of coconut.  It bounced along happily in my mouth. 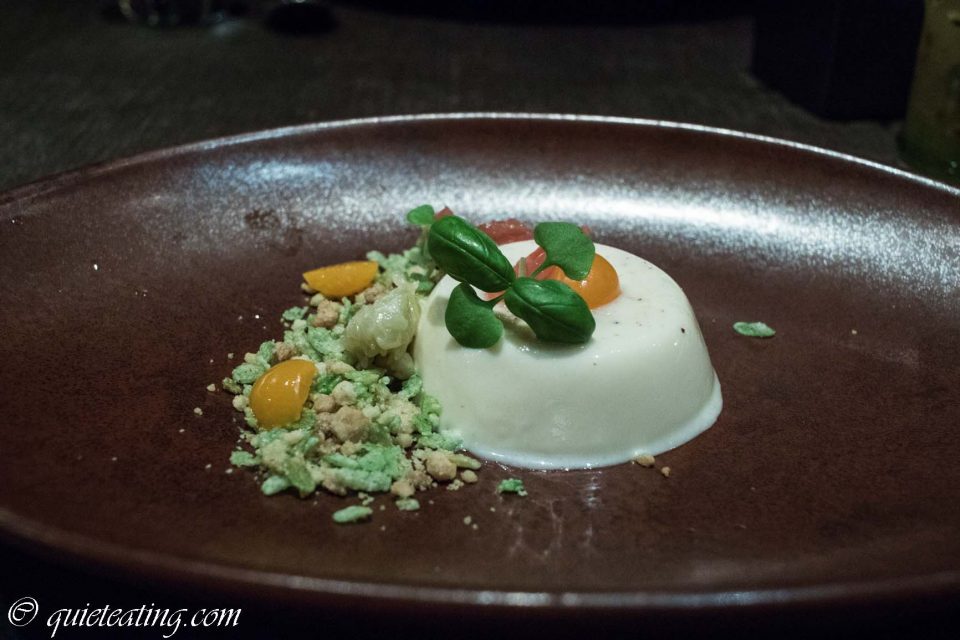 Lemongrass and toasted panna cotta ricotta.  What a pretty concoction you might exclaim.  If anything, it tasted better than it looked.  Smooth panna cotta offset with crunchy grains on the side, it felt like they saved the best for last.  A great combination of texture and taste. 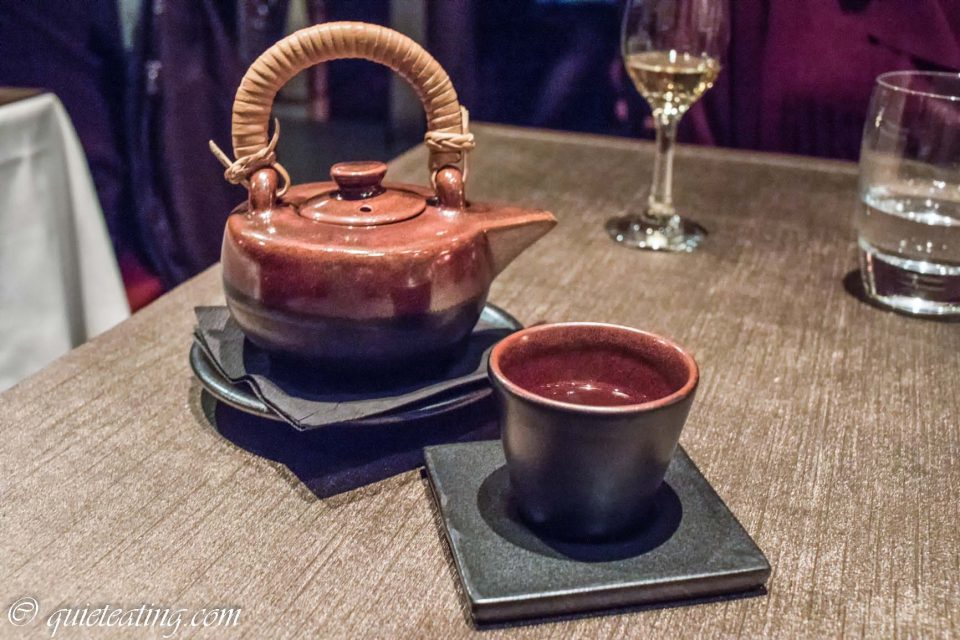 Lemongrass tea.  Providing a gentler palate cleanser than mint tea, in a handsome teapot and cup.  A great way to make sure that you left the meal feeling refreshed and full of energy.

At the end of the meal, as I gazed around, I was swept away into memories of my past as it summoned up a great comparison with how I used to eat.  In my younger cooking days, food would be consumed with slightly scorched walls, bent cutlery and dodgy chairs.  Now, I was in a freshly scented room, with mood lightning and cultural wall decor.  As I would often advise my friends, it is best to have your dining companions in a good mood if you want them to be particularly receptive of your cooking.  On that element, Patara has it all done pat.

We were invited to review.  Estimated cost is GBP65 excluding drinks and service.