I do wonder how restaurants come up with their names.  Some seem to make oblique reference to their chef proprietor.  Others make innuendo to the type of food that they serve.  Yet others make allusion to their location.  Some, a combination of these all.  Guess which way New Street Grill goes. 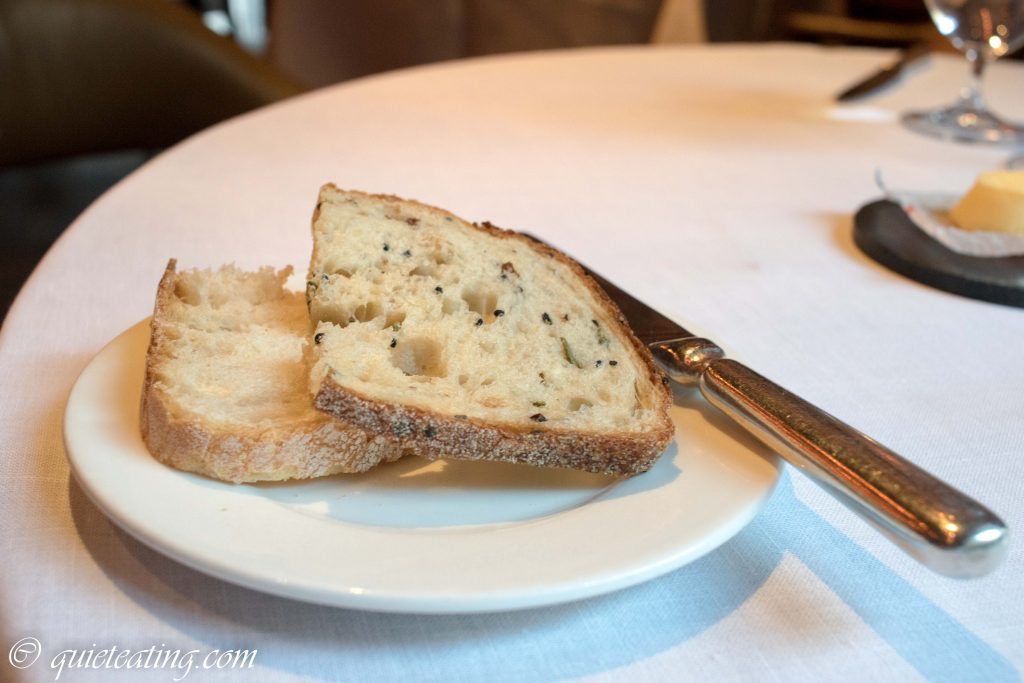 Sourdough and seeded bread.  Looked great, tasted a bit more normal.  I found the bread to be a bit drier than I prefer but then that’s me.  As one of the attributes often bestowed on me is Mr Picky.  I seem to pick up a lot of Mr titles. 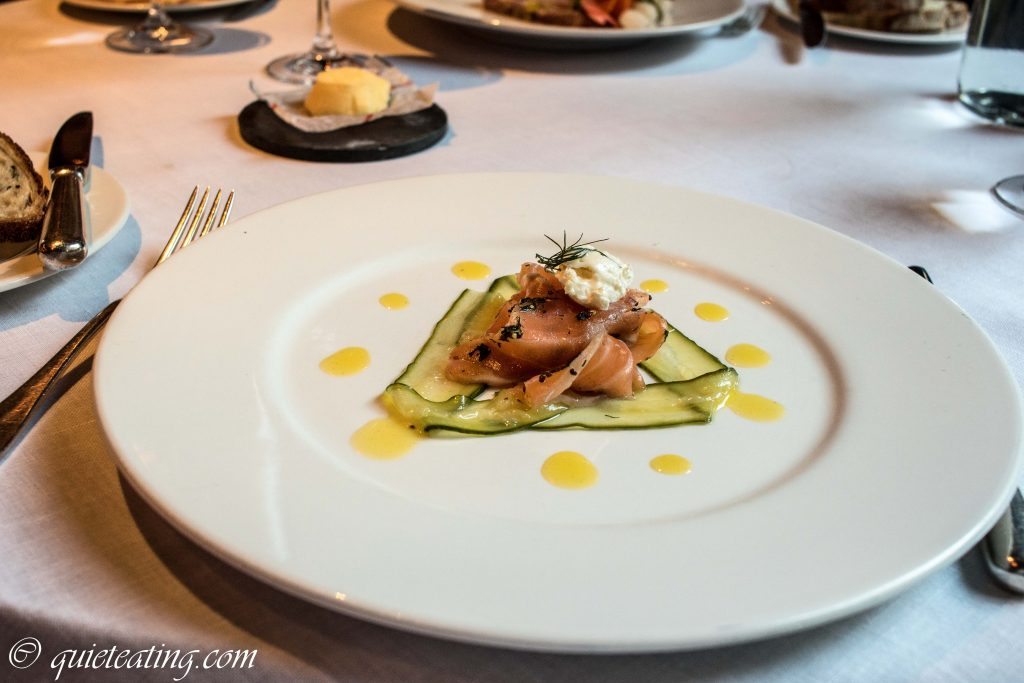 Cured Loch Duart salmon, dill cucumber and horseradish cream.  Nicely presented and selected, this dish was good.  The salmon avoided the curse of other cured salmon I had tried before.  Excessive saltiness.  With the horseradish and cucumber, I enjoyed this cleaner than expected taste.  I could have happily eaten this for the rest of the meal but that would be doing the rest of the food a disservice. 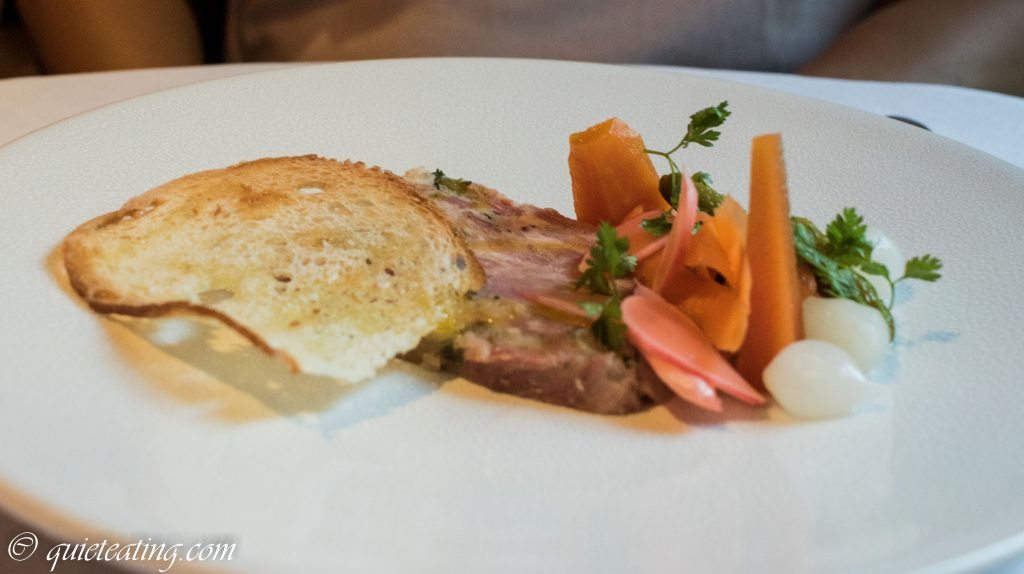 Pressed ham hock and parsley terrine with pickled vegetables and sourdough.  I have always wondered how you make pressed foods.  Is it a case of sitting on the pig for long hours?  Or perhaps dropping a lead ball on them?  Regardless of the method of creation, this smashed flat hock was tasty and a bit flat.  Flat in a good way as again they had managed to avoid excessively seasoning the dish with too much salt.  Again, another grievous sin that I have often experienced. 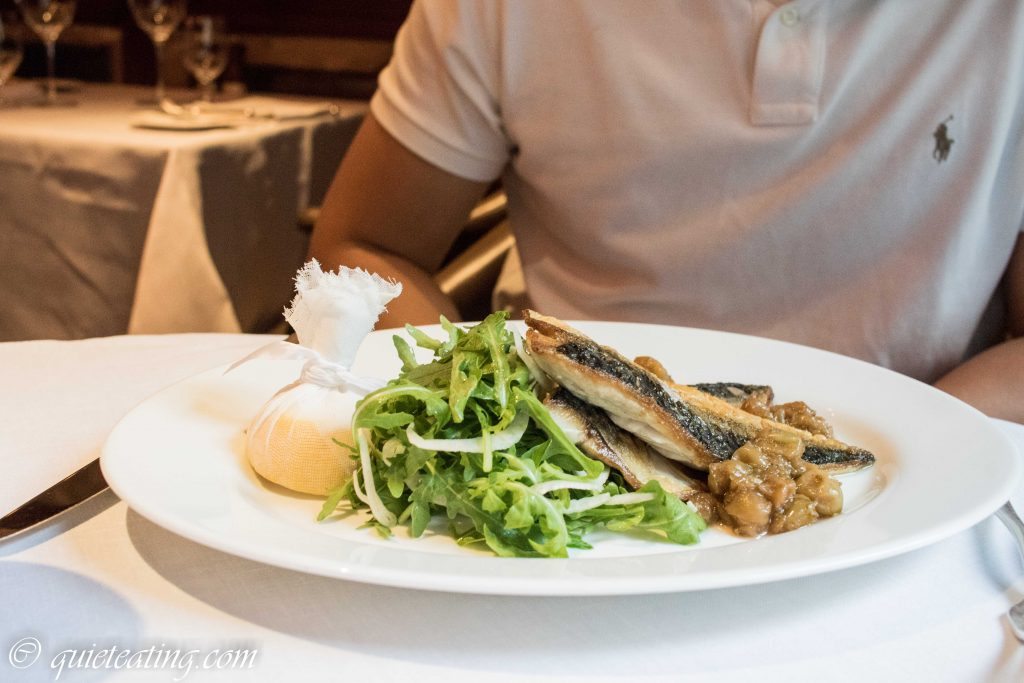 Grilled mackerel fillets, rocket and fennel and gooseberry compote.  The fish was ok, the salad was salad.  This unfortunately was the weaker of the two mains that we had.  The fish felt a bit underseasoned.  Then again, I admit that I have a hearty dislike of mackerel of the smoked variety.  Although this was served in a different manner, my lack of interest in this dish may be simply due to my prejudices. 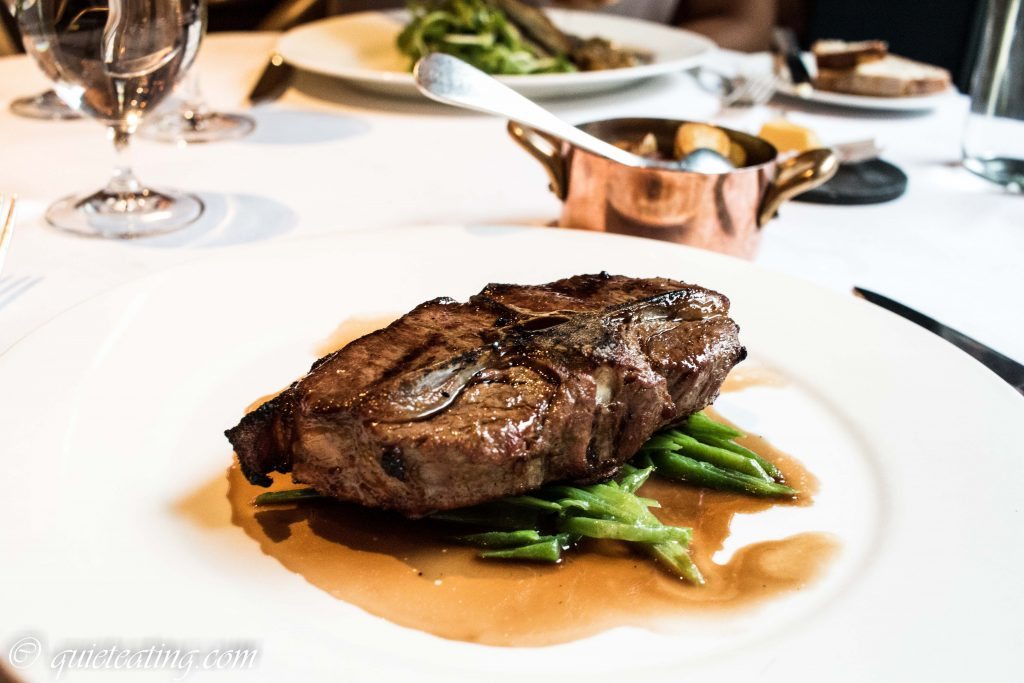 Josper grilled Barnsley chop, runner beans.  A slab of meat was much more to my liking.  Especially given my lack of meat in my recent post.  Carefully cooked medium rare, the meat was soft, moist and full of flavour.  This was definitely something to try again.  When I was writing this post, I also came across an interesting typo I made.  “Funner beans”.  Indeed.  The beans were ok but not that fun especially when considering the meat on offer.  The beans paled in comparison to the chop. 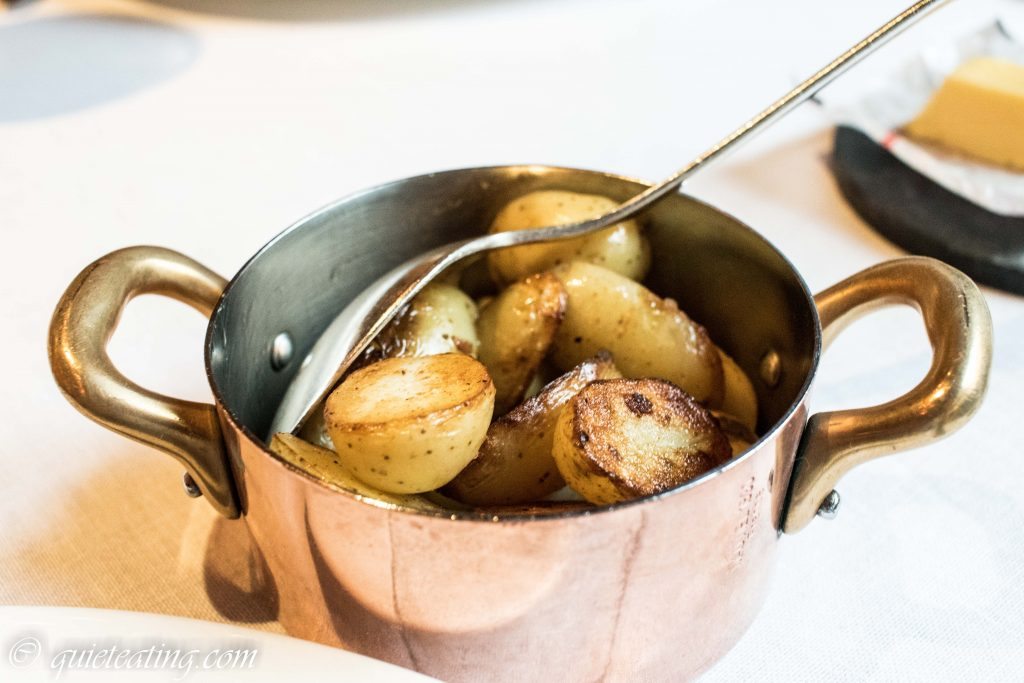 Saute potatoes.  Prettily presented, these unfortunately tasted if they could have done with a bit more saute.  Flame and carbon were missing (probably as they are meant to be) but the potatoes just tasted quite bland.  Almost as if they had just been boiled and then quickly seared. Or perhaps that is just my fussiness.  I do like the carbon flavour sometimes, just not excessively so. 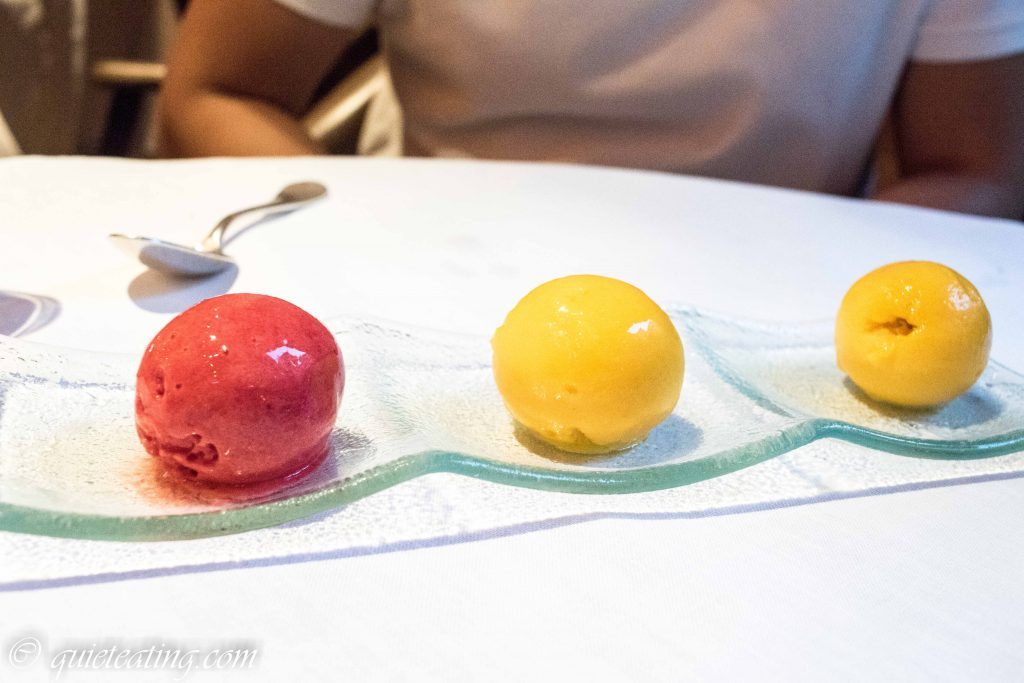 Raspberry and mango sorbet.  Little balls of fun, the sorbet was fruity, clean and a good way to end. 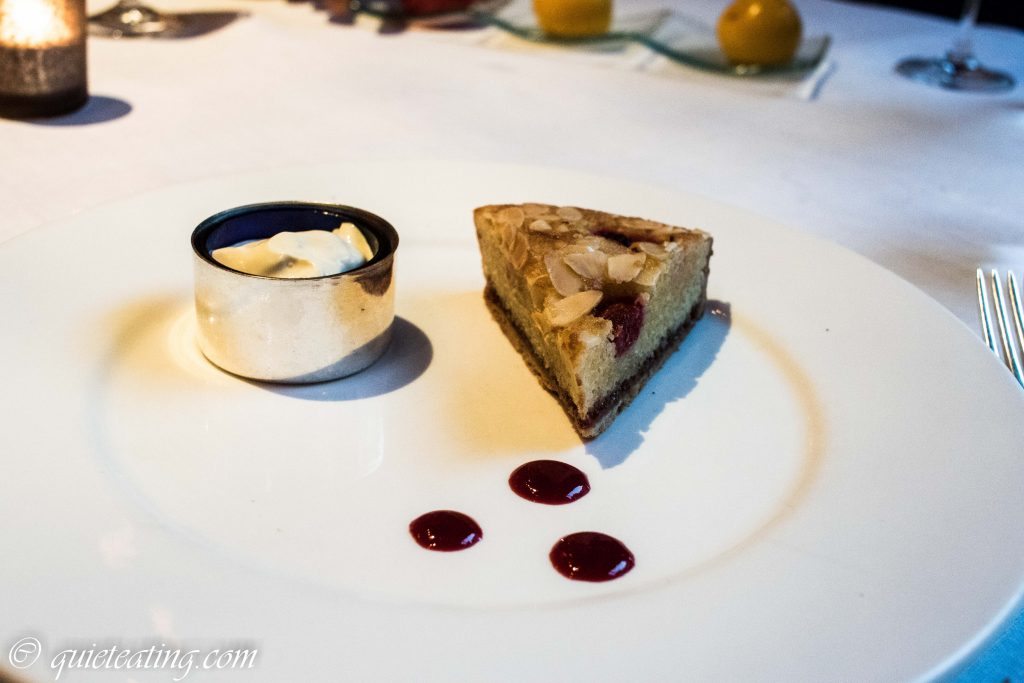 Almond and raspberry frangipan tart with Cornish clotted cream.  Another frangipan you think.  Actually, you would be right.  Although, it is the best frangipan I’ve had in recent memory.  The tart was airy with a crunchy base, sprinkled with a nutty almond top, perfect with clotted cream and jam.  I would come back here just for this.

Great quiet ambience, attentive service and great value.  If you happen to be around the City without a place to go, this place should be on your list.  Great for a good meal that won’t break the bank.  Fitting given the British bastion is only a stone’s throw away.  Given the dive of the pound, I think there might be some people wanting to put a rock through its windows.  Instead, why don’t they sit down at the New Street Grill and enjoy some good food, I know it calmed me down.

Dinner (3 courses) was GBP25 including a beverage of choice but excluding service.