What store do you put in titles?

Do you think that having a “Sir” added to the front of a name makes a person worthy of recognition or instead denotes someone with a lot of money to throw around?  Alternatively, what about those that are bestowed titles by lineage or marriage?  Does that detract somewhat?  Or perhaps do you think it is just more honest if people buy their honours, money for honours scandal aside.

I was recently reminded of the amount of effort that goes into celebrity gossip these days.  Just step into any newsagent and purview the magazine rack.  It seemed that the majority are about someone’s broken toenail, some super skinny absolutely guaranteed stupendous slimming diet and my personal favourite, something that is absolutely to die for.  On that last account, it might not be in that magazine readership’s interest to take that literally.  Loyalty to the written word would in this case shrink readership permanently.

However, (most) of the time, titles are there for a reason.  To recognise a particularly charitable act, sporting honours or prodigious contribution to their field.  In which case La Dame de Pic has nothing to worry about from little me.  After all, I’m just an annoying blogger. 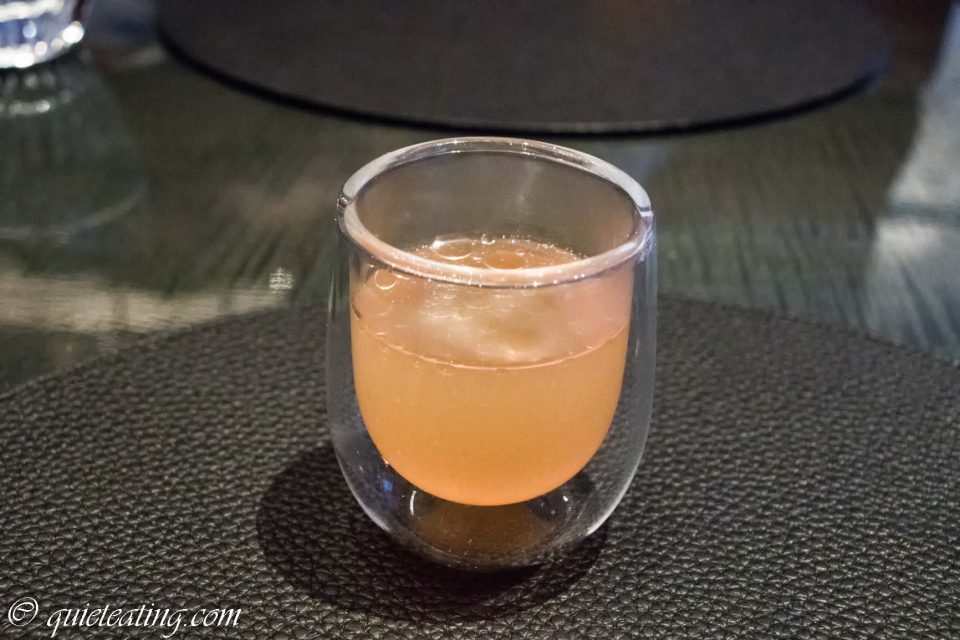 Yuzu, dashi and langoustine water.  Sitting just across from the Tower of London, at that landmark of modernity (where house arrest seemed to be invented), I should have known that the start would be something interesting.  A light, savoury soup as an amuse bouche.  Fascinating.  Savoury yet without a lingering aftertaste, it whooshed by, perhaps a bit too fast. 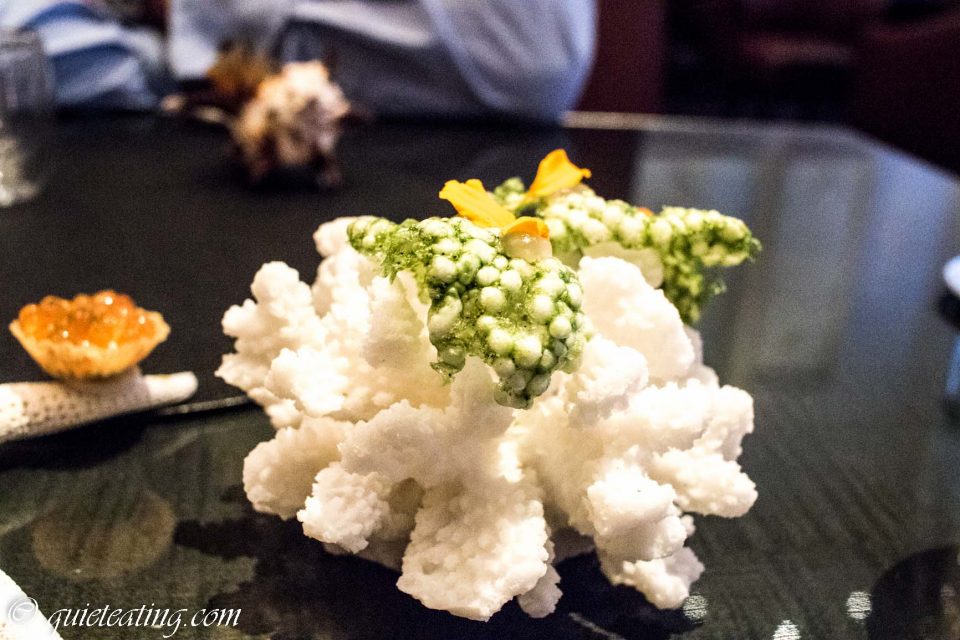 Plankton crisp.  Crispy and somewhat insubstantial.  Interesting interplay of crunchy, flavourful and in-substantive.  Alright but just remember not to take a bite of the placing.  If you did, that might require a visit to the dentist. 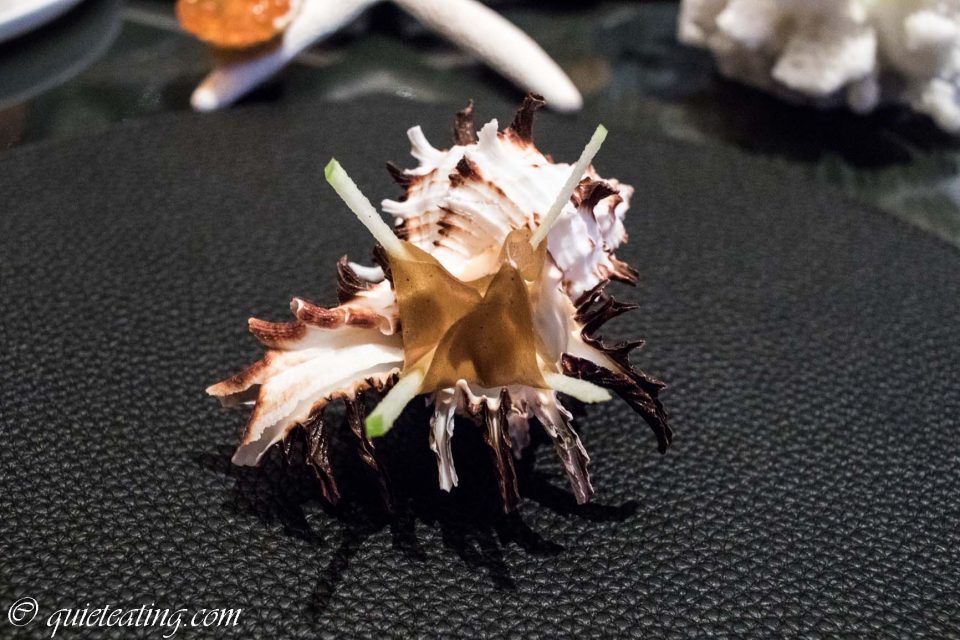 Cep parcel.  A delicate mushroom package, second only to the mushroom ice cream I had in Sketch long ago, it was paradoxically substantive with almost ethereal pasta case.  Excellent. 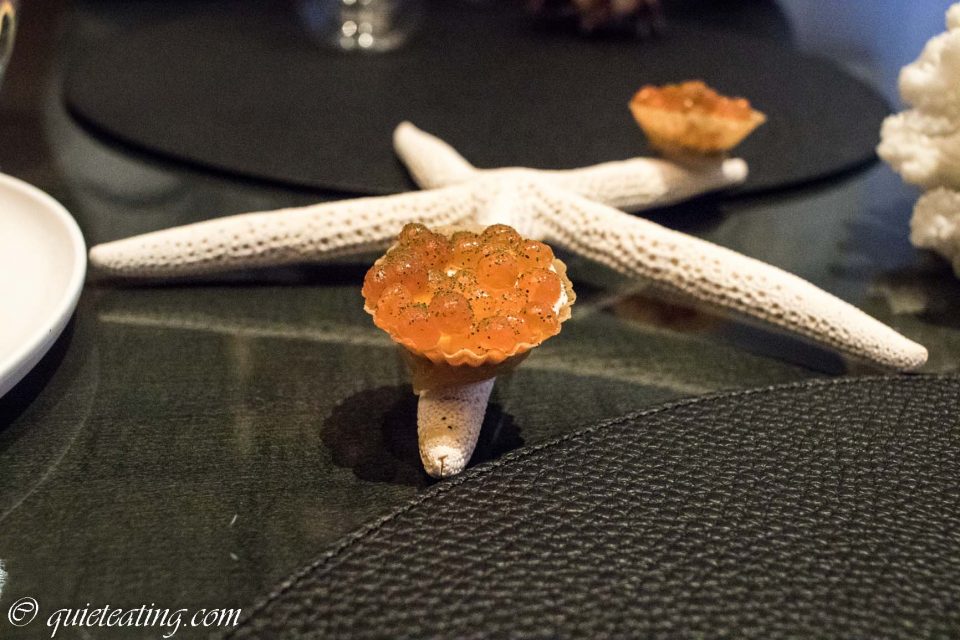 Salmon roe tartlet.  Creamy and full bodied, I particularly enjoyed the presentation, almost as if the sea was personally offering its bounty to me. 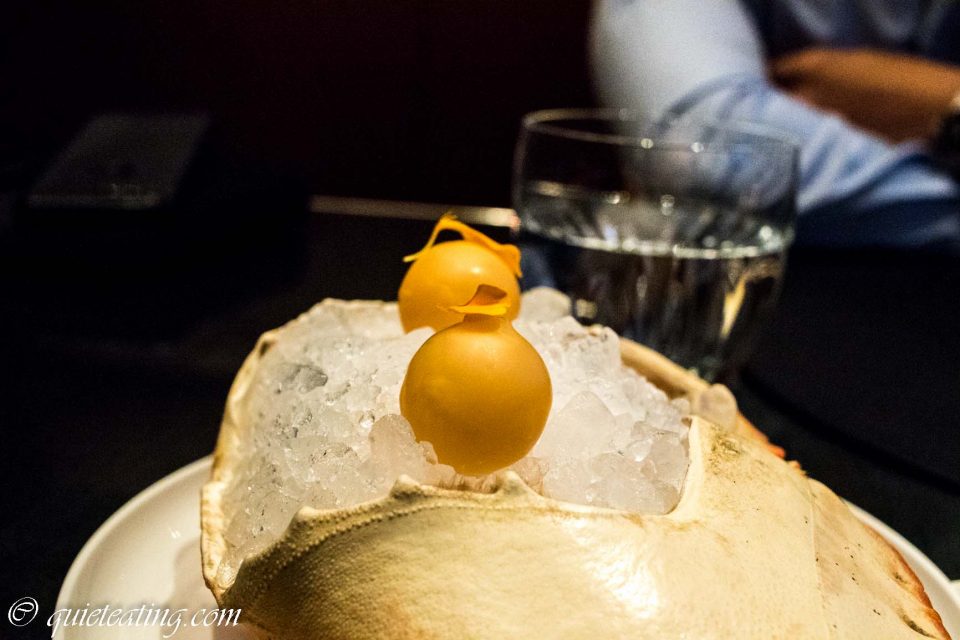 Gin ball.  Weird.  That is according to my companion as I did not partake, it being full of alcohol and all, was unusual.  Not unpleasant, just something different. 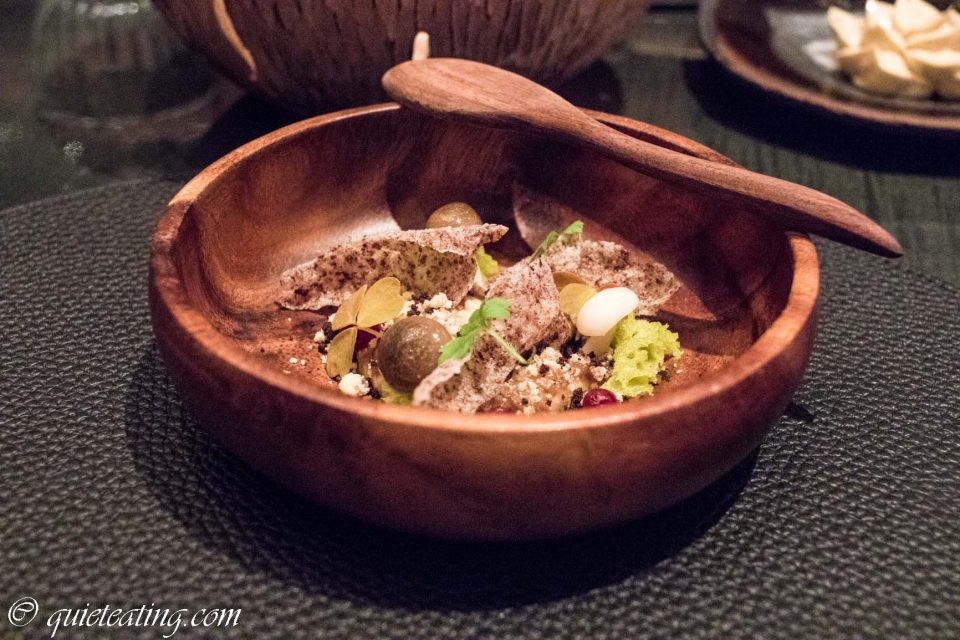 Ceps, quinoa crisps and berries.  Standing back for a second here, this was the past and present combined.  Rustic yet modern wooden bowl and spoon, mushrooms with that epitome of modern healthy eating, quinoa (and in a crisp!) finished off with mushrooms.  Great. 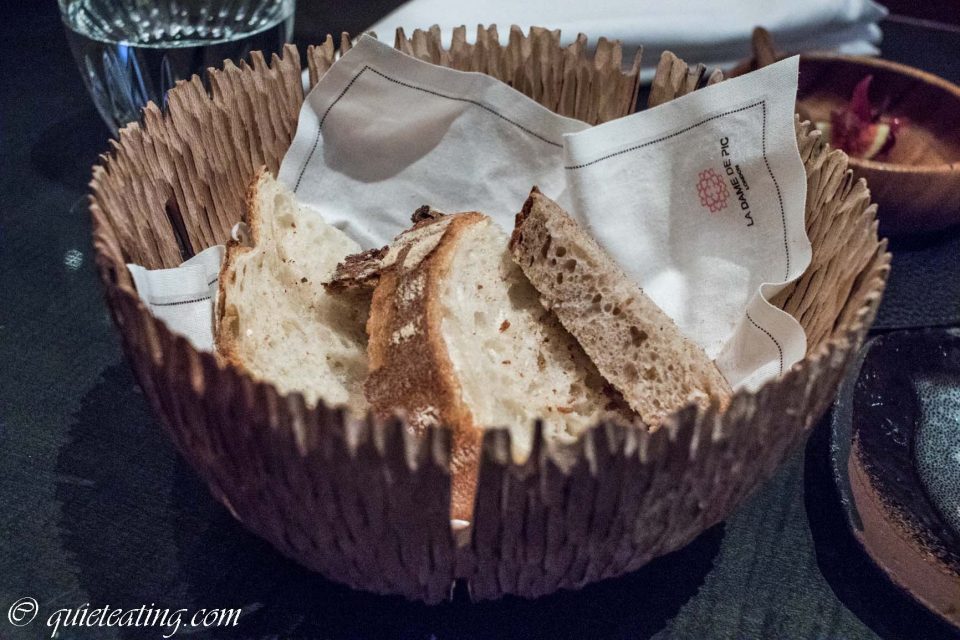 Bread.  Decent if a bit too plain for my liking, didn’t really have an oomph. 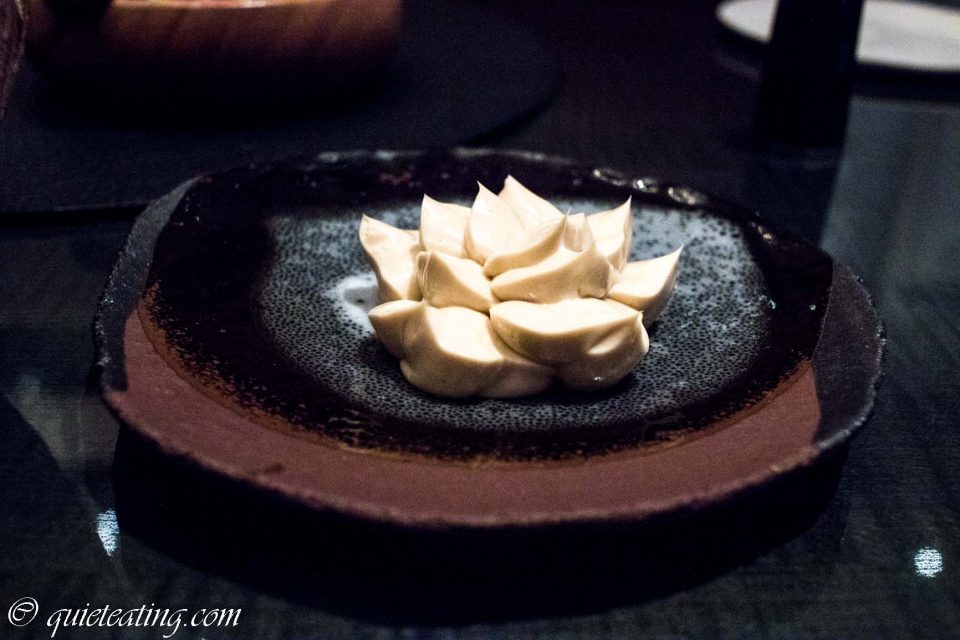 Butter.  Although that was easily fixed with presentation of particularly artisan butter.  Smooth, creamy yet not too overpowering. 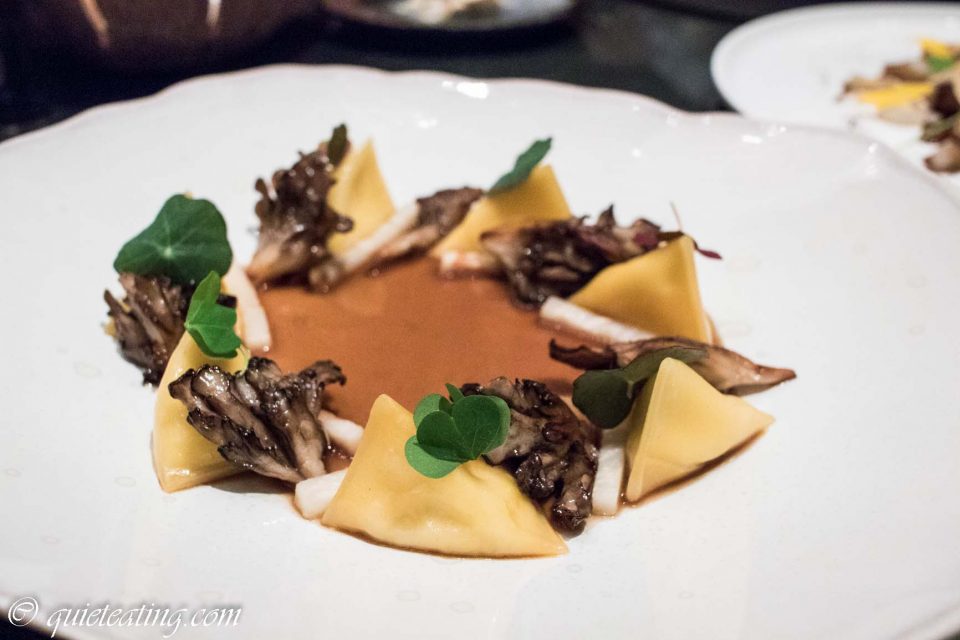 Berlingots, pasta parcels with Gruyère and Vacherin cheese, seasonal wild mushrooms, woodruff, barley and roasted hazelnut consommé.  This has to stand out as the best dish of the entire meal, there were so many things going on at once, each of which would in itself be worthy of much verbiage.  Yet altogether, things were even better.  Cheese, wheat, mushroom, nuts, everything that would make me happy.  When their powers were combined, I almost felt like I had attained a higher plane of existence.  At least for a brief moment. 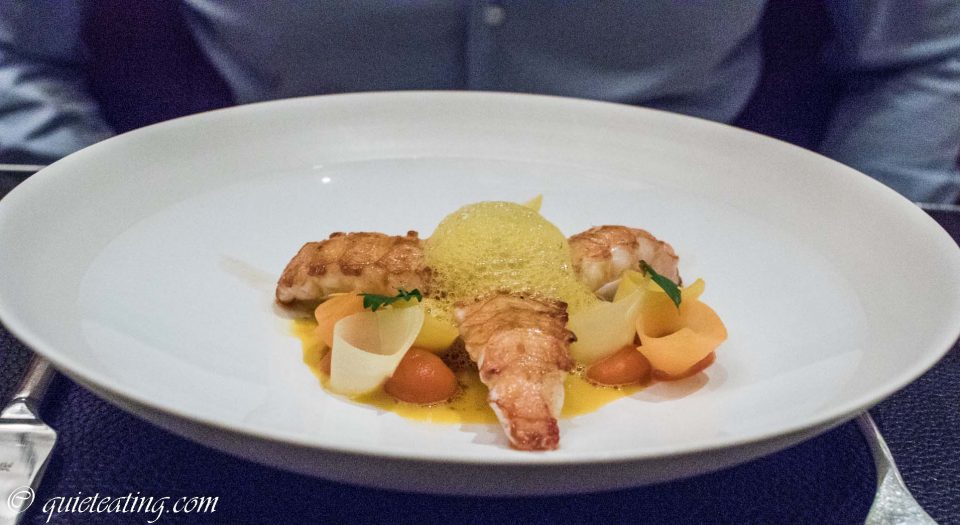 Scottish langoustine, seared in shellfish butter with heirloom carrots, bouillon infused with pine tree buds and geranium.  Delicately cooked and deliciousness combined, this managed to achieve the difficult line between over and undercooking which many chefs are wont to smear.  Another excellent dish. 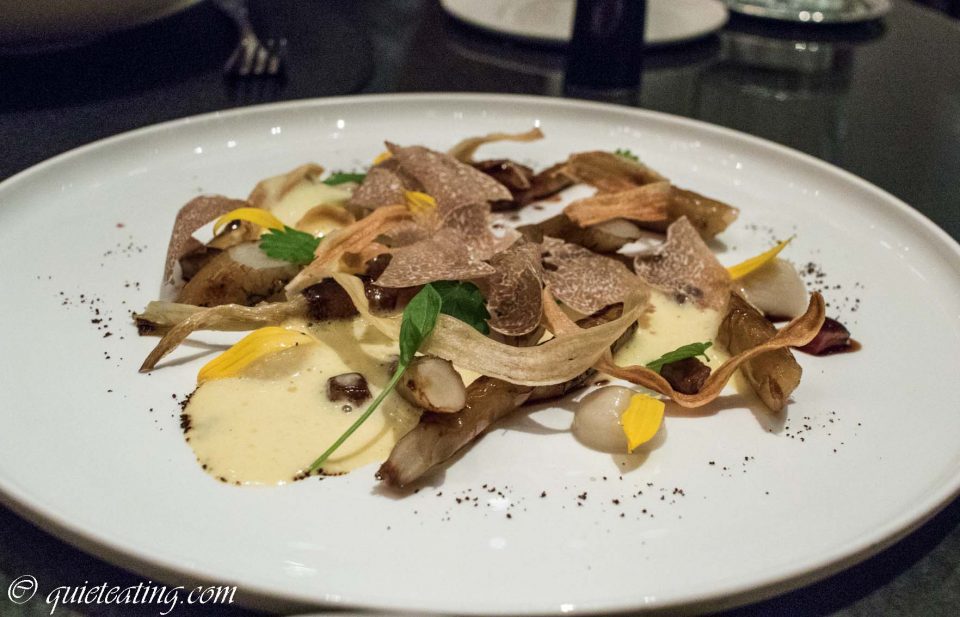 Baby salsify, roasted, cured pork cheek, and white truffle, coffee and green cardamon sabayon.  Call me a peasant here but I didn’t find the truffle lifted this up much higher.  It was the most expensive meal of the dinner but sadly failed to live up to its price. 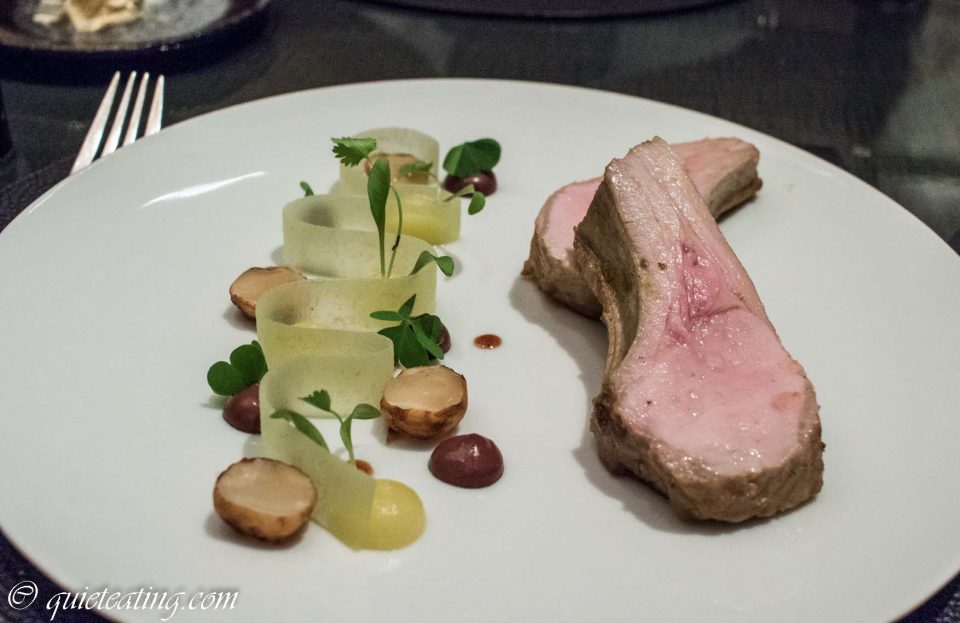 Suckling pig marinated in Portobello beer and chamoille celeriac in brown butter, spiced apple, Vietnamese coriander.  Exceptional presentation with the curl of celeriac waving down the plate, the pork did not disappoint either.  See the glistening pinkness hinting at succulence with light taste. 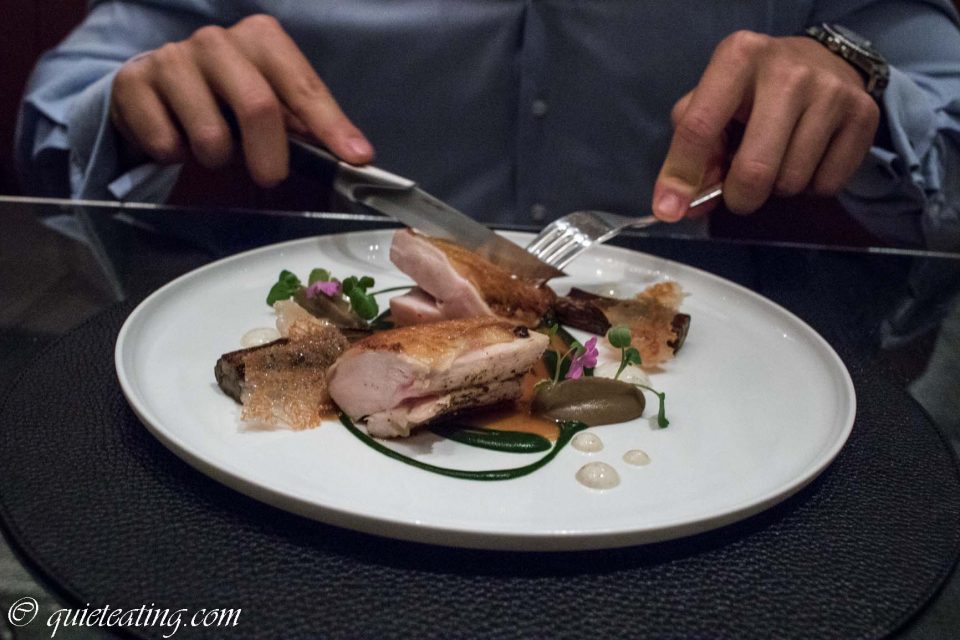 Challans Chicken, marinated in juniper and Lapsang Souchong tea, aubergine and watercress.  Another lightly touched meat dish, it served up well.  It managed to avoid any dryness, something which I find difficult to do with the breast.  Yes, it was good. 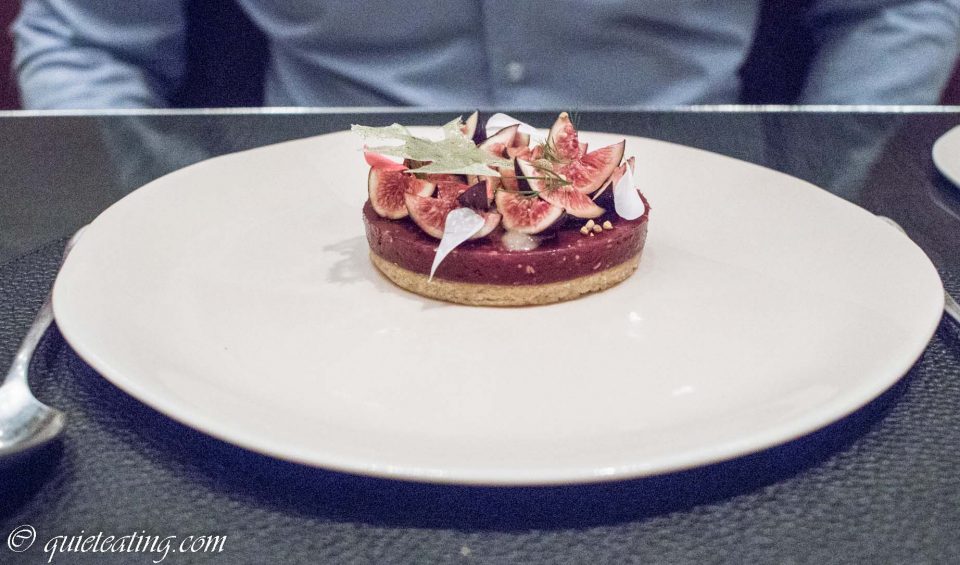 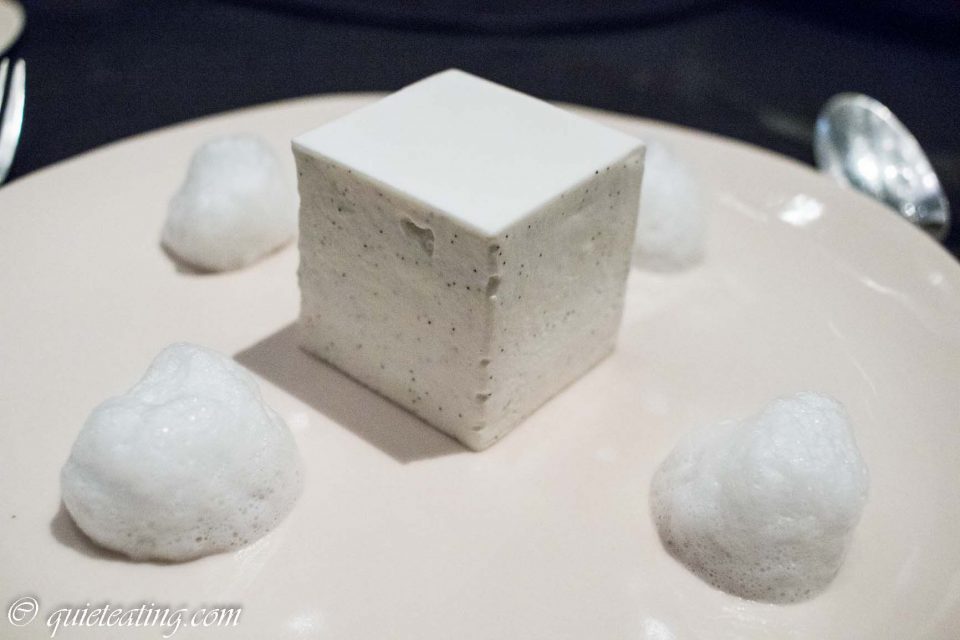 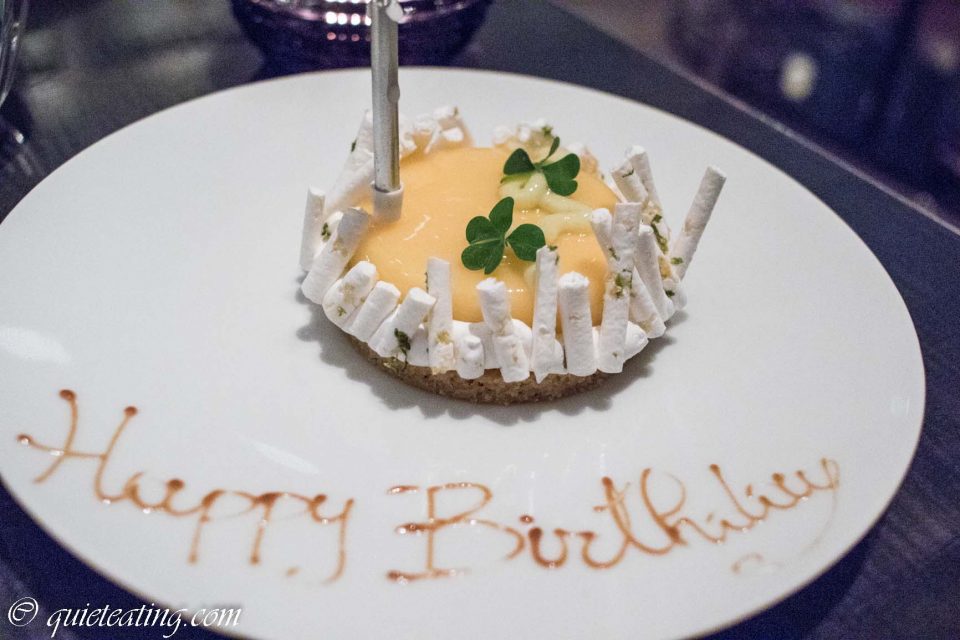 Birthday cake with a mango twist.  A little extra.  Strangely enough, I enjoyed this little tart more than the on menu desserts, tangy with body crust. 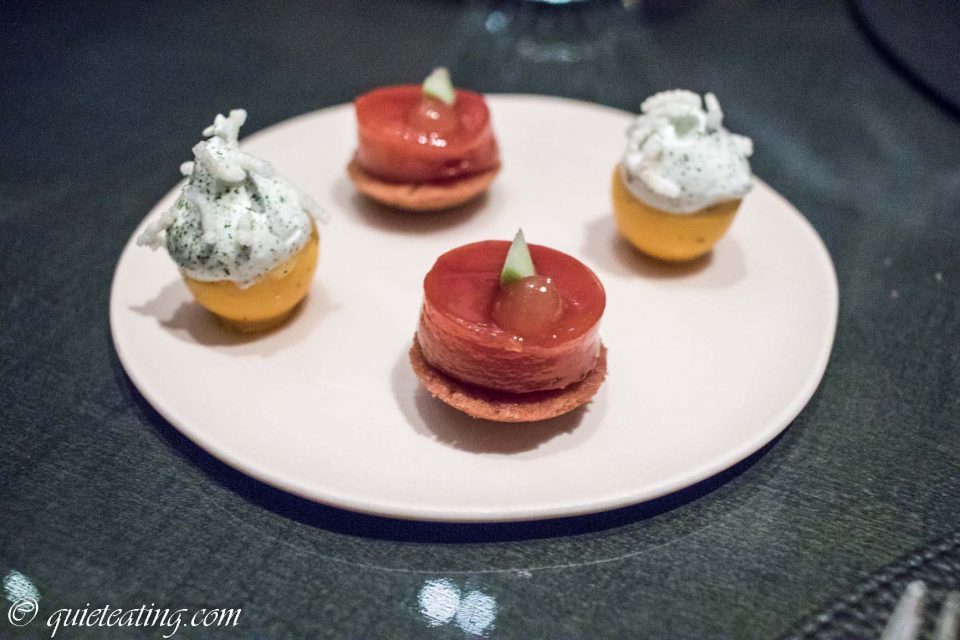 Raspberry and strawberry tart.  Cream tart with genmaicha.  Again, easily winning on the presentation front, not so eye popping in the taste as a bit too light for me.  Gone too fast in the wind, you could blink and miss it.  Perhaps that is what they will say about the UK’s EU membership in the future, gone in a flash. 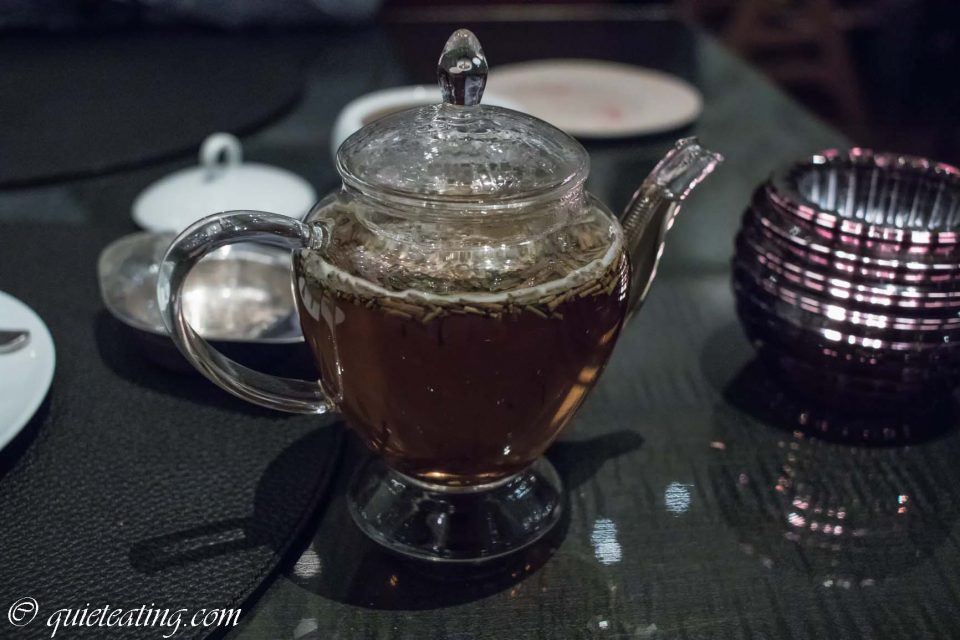 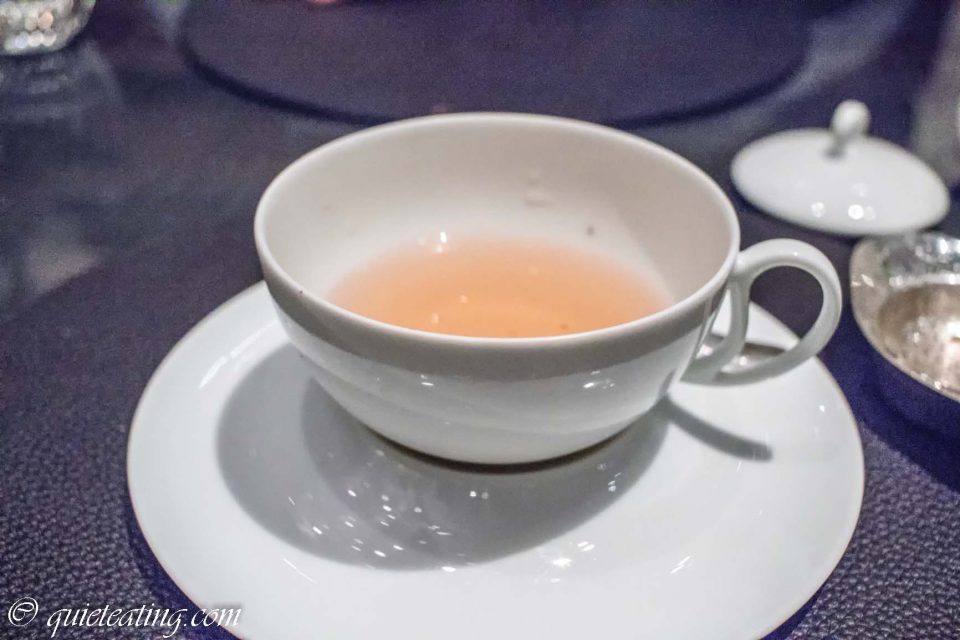 Mixed in one.  An interesting flavour if not something that I was quick to repeat.  Just as it said on the tin, it just tasted like tea flavoured with coffee.

Perhaps I should have guessed that a place which was in such a great hotel, would very much look the part.  The presentation was stupendous, some of the dishes worth an eye widening moment, others less so.  There were some interesting dishes and exemplary plating all provided in peaceful and rather luxurious surroundings.  As for whether they deserve all the hype?  The window dressing was all there if just sometimes, the substance did not live up to expectation.  Kind of like nobles and heroes these days but that’s another story (and rant).

Dinner (3 courses) was about GBP90 excluding drinks and service.