Have you ever felt that you had a burning question that you just couldn’t wait to ask?  So much so that it was oh so terribly difficult to repress.  Almost as bad as those times when you were stuck in the back seat of a car during a long road trip and then realised that you should have done something at the last break.  Perhaps it was that time that you saw a particularly well dressed person on your commute and wondered which tailor they used.  Or maybe it was that time you looked at envy at someone else’s shoes and wondered where they shopped.  Or even more simply (or likely in my case), you glanced across to another table and caught sight of the most stupendous, awe inspiring tower of food that you had ever laid eyes on and wanted a piece. 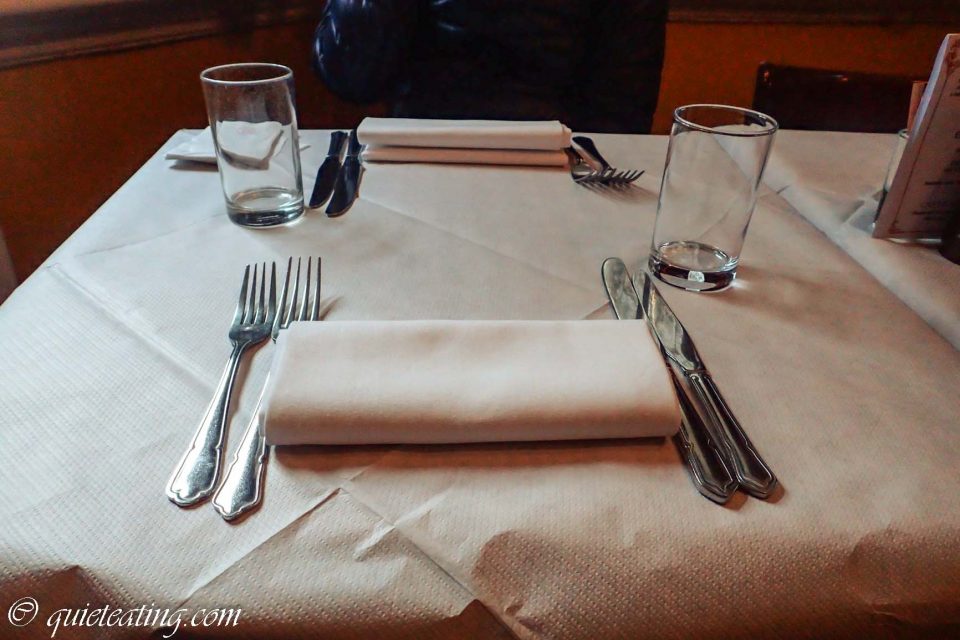 However, my arrival at Buvette was not so dramatic.  Instead it was dictated by another requirement.  Finding a place to have a nice meal before a relaxing walk in the park.  I had journeyed over to Richmond to marvel at a different greener side of London.  Having decided where to spend some of my precious weekend, the next step was searching for a convenient place to eat.  On the internet, I came across what seemed to be a quaint French bistro just off the high street.  I was sold by the promise of provincial, honest, uncomplicated French food. 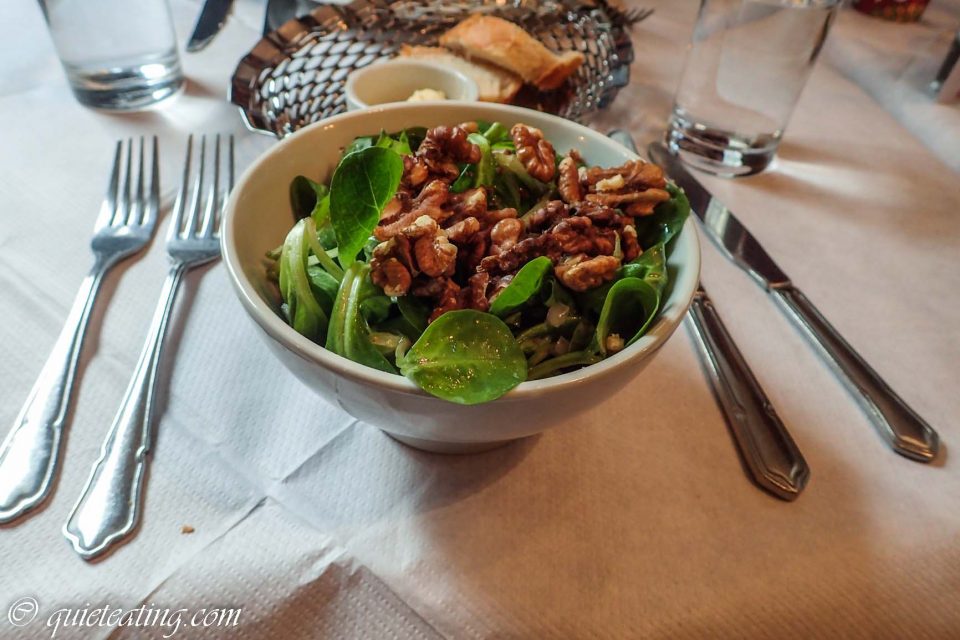 Salade verte aux noix.  Salad with walnuts, not bad.  Lightly dressed in olive oil, with nuts to top it off, it was a pleasant opener for the meal. 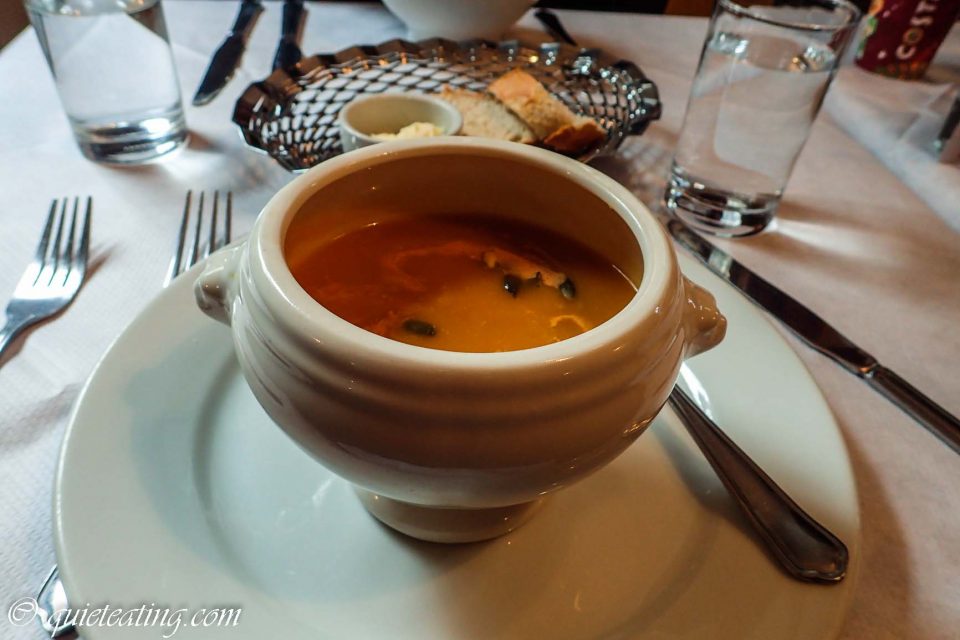 Cream of roast parsnip soup.  The other starter that we ordered was also above average.  A generous serving of creamy cream soup.  This further encouraged thoughts of an excellent meal. 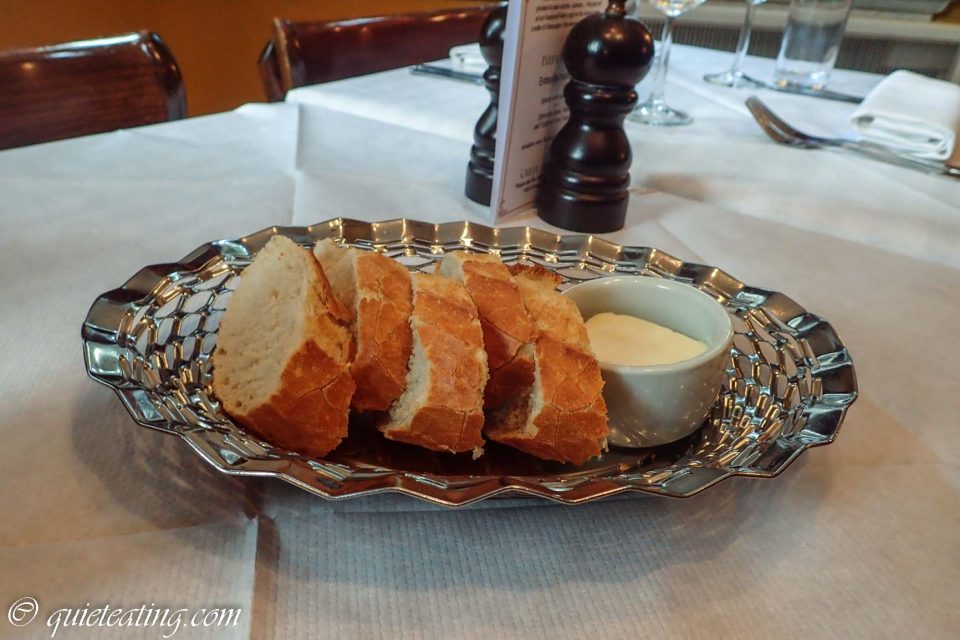 Bread.  This was the best part of the meal, nicely soft and a dangerous lure promising more.  In hindsight, it was probably store bought as that would explain the contradictions that would soon become apparent from the food to follow. 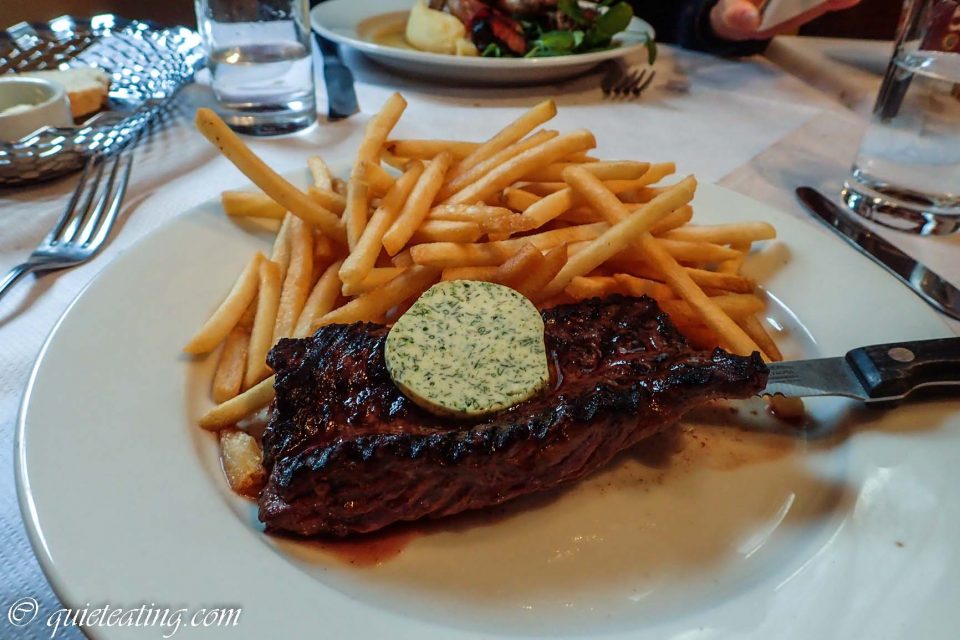 Steak frites – the fries were ok.  The steak less so.  Heavily charred, the taste of carbon overcame everything else.  I guess the steak might have been not bad but I couldn’t taste much of anything else.  The herb butter was too little too late, as I couldn’t taste it among the charred meat flavour.  The fries were a bog standard affair, which meant that they stood out as the best part of this dish. As they weren’t burnt. 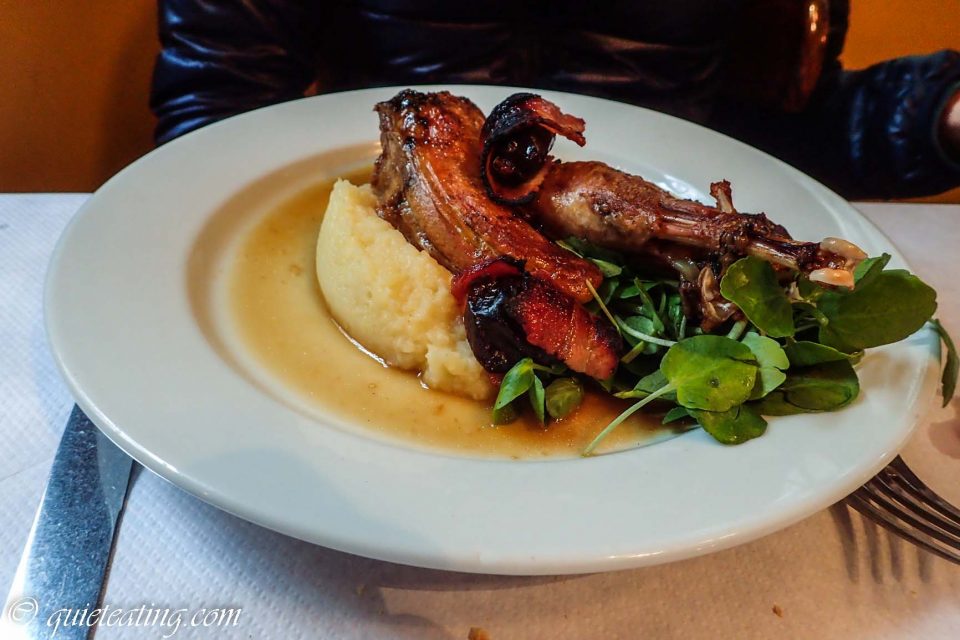 Breast of roast pheasant, spiced red cabbage and potato rösti.  Unless I am going more blind that I already am, this did not look like a breast.  Rather, it suspiciously had a piece of leg poking out.  I can usually forgive inaccuracy in descriptions as long as they lead to something good.  However, when things turn out vapid, limp and with shards of bone littered throughout, I must find objection.  As for the potato rösti, this came out as a sad mush of watery mash.  Another dish to avoid. 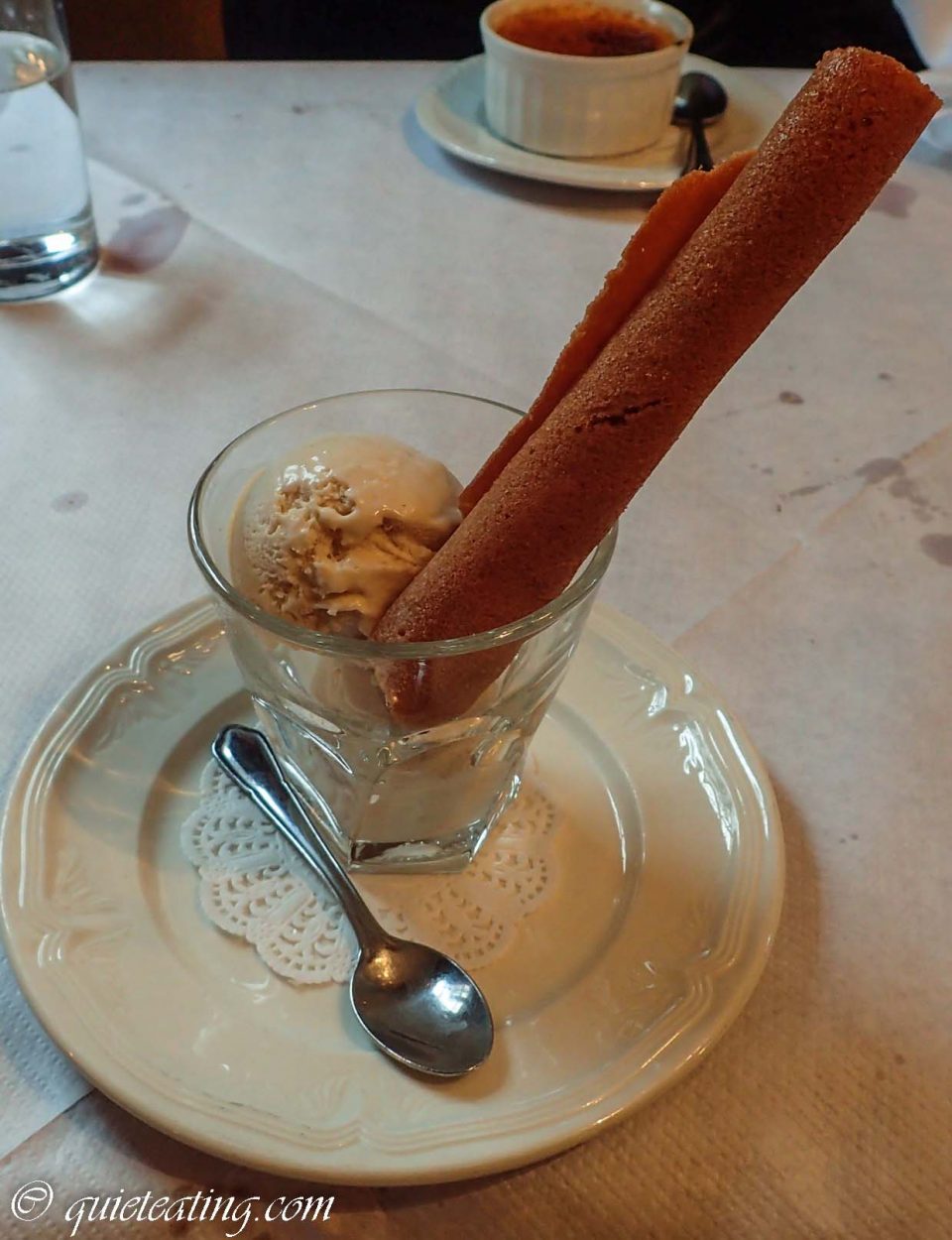 Spice ice cream.  Sadly, a highlight of the meal as it was fairly average.  It tasted like it had been scooped out of a tin (which it probably was) and placed with little imagination in the cup.  Placed among what had come before, it was stupendous. 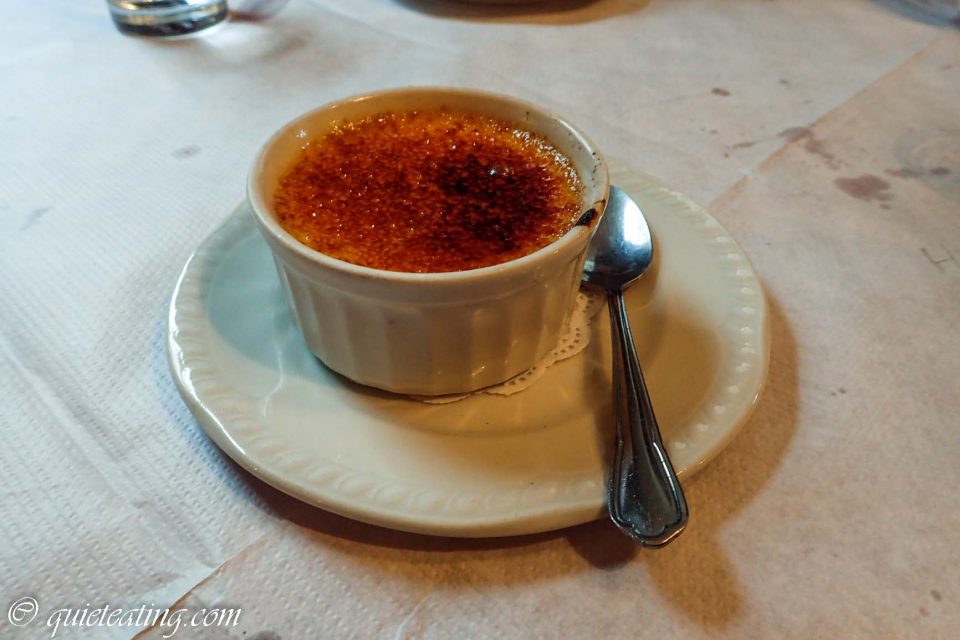 Crème brûlée.  By looks alone, it promised much.  By taste, it disappointed as the custard continued this unhappy motif and was particularly listless.  It tasted like plain cream with some chunks of sugar on top.  We were so disappointed by the meal that when we were asked for coffee and tea orders, we declined.  To better make a quick exit.

I want to give La Buvette the benefit of the doubt.  They have a lovely cosy dining room just off the high street in Richmond.  Their warm although erratic service, was pleasant, if quaint and slow at times.  Although perhaps this is in keeping with the theme of the restaurant as it gives a more rustic feel.  I must admit to being hoodwinked once again as the internet is full of effusive praise for them.  So far from the truth that I experienced.  As I am trying to give them the benefit of the doubt, perhaps they just had an off day, as things started off so well.  Things devolved to a rather more shambolic play by the end and I may have reached my carbon limit for the month rather quicker than anticipated.  On a more positive note, the bread was good.