A new restaurant from an acclaimed Spanish Michelin starred chef opening up on the Strand.  My friends and I were particularly curious as it seems that porting over restaurants from Spain sometimes can suffer from a bit too much heat.  Crashing and burning more particularly.  We eagerly entered to see if this would be the case too.  We fervently hoped not. 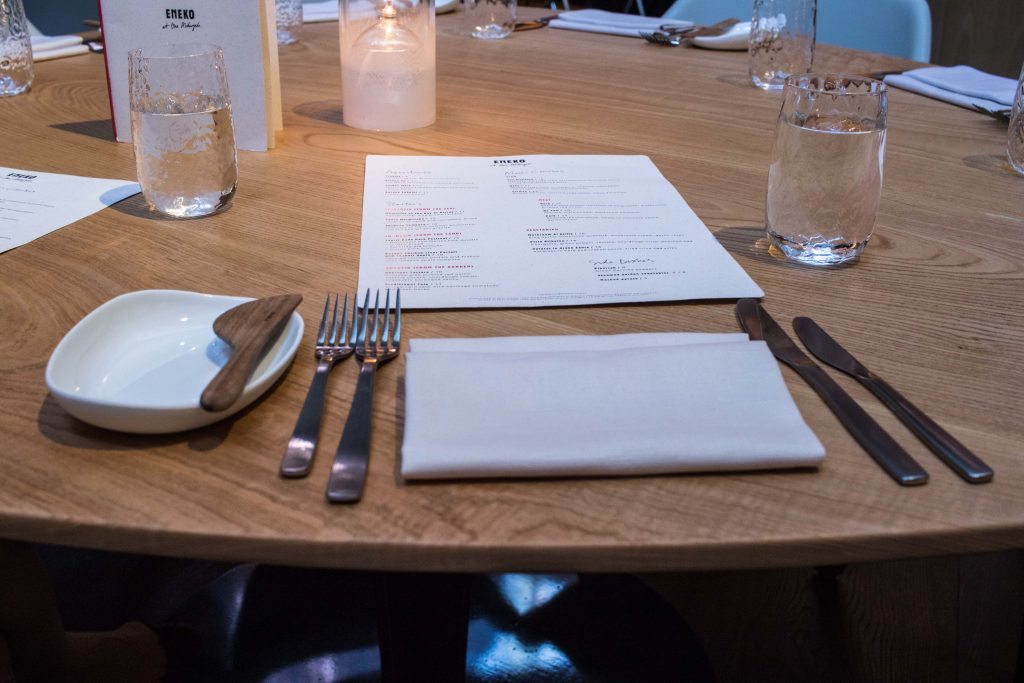 With water at the ready, we ambled on.  Just in case history repeated itself, useful to have something to douse the flames. 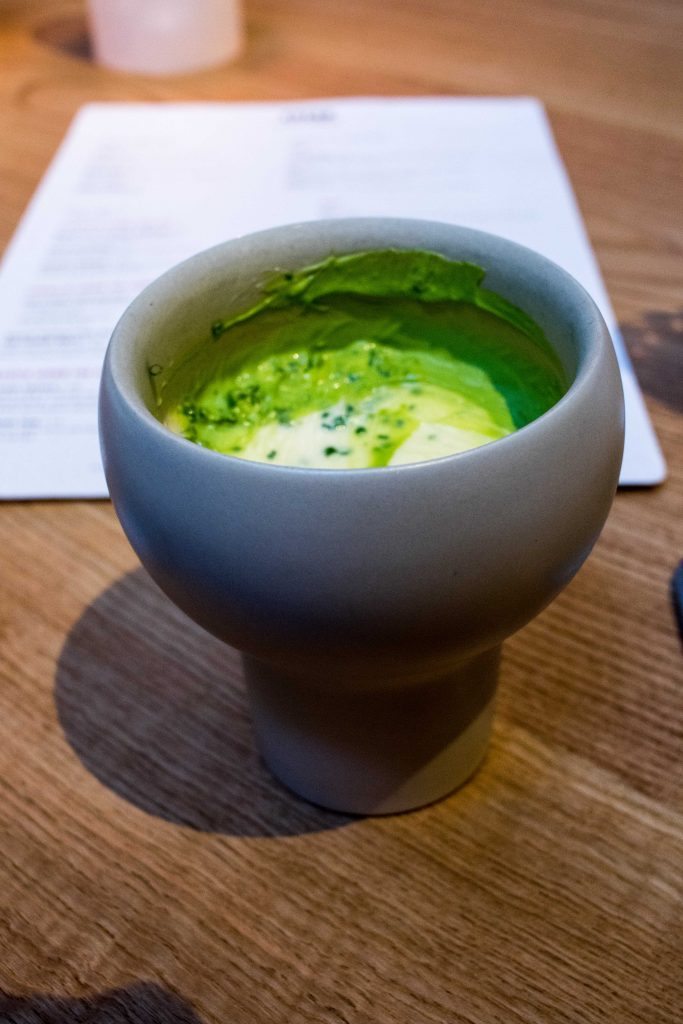 It started with a particularly interesting take on butter.  You are supposed to churn it yourself.  After I was done, this may be an abject lesson why I should stay away from the production of diary products. I think I might have curdled the milk.  Well at least that’s the reason I give for not particularly enjoying the diary. 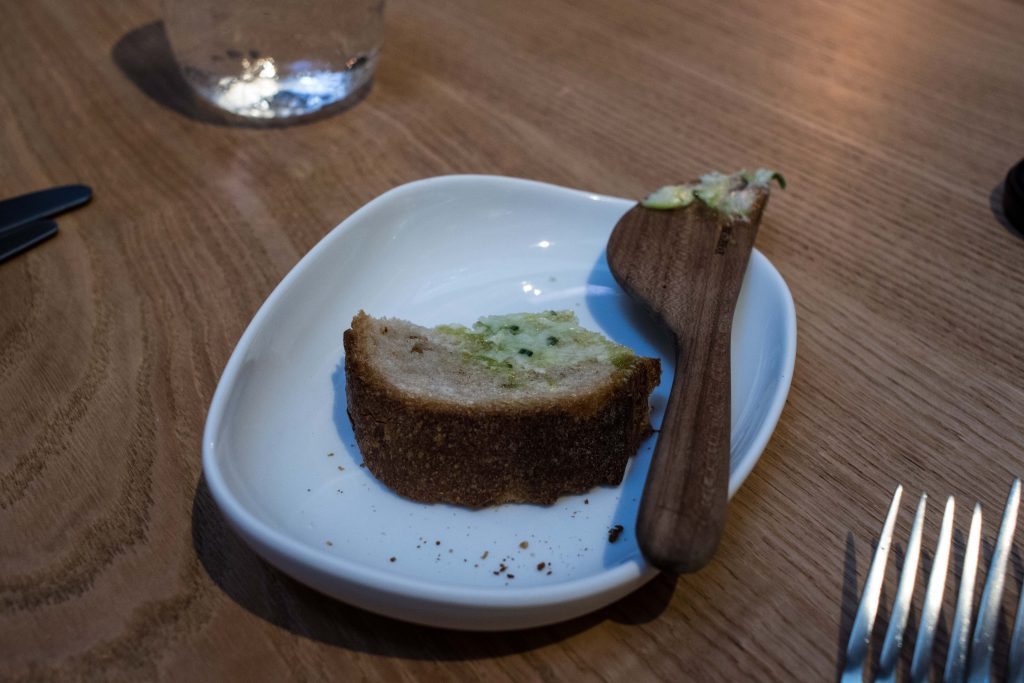 It went along with the house bread and unusually a wooden knife.  The bread was disappointingly ordinary and the effort requiring butter did not seem to reward with an interesting taste for the work. Here, I must pause to talk about the preponderance of timber.  Wood seemed to be a theme here. 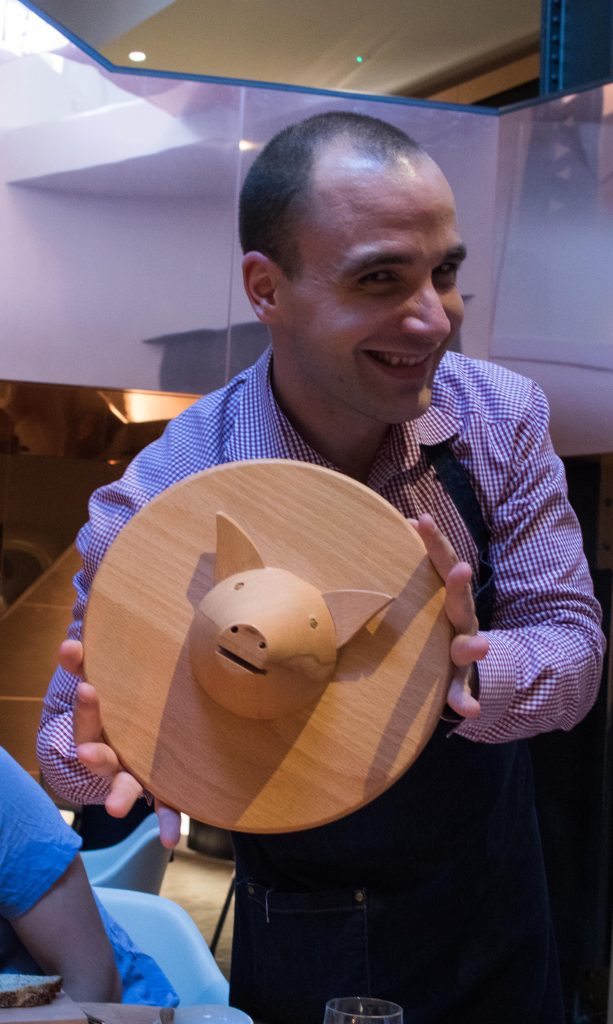 As our waiter was eager to show us, porky goodness on wood was to surround us.  All the elements for a fire were now in place.  Wood, cute ornaments and a cranky blogger. 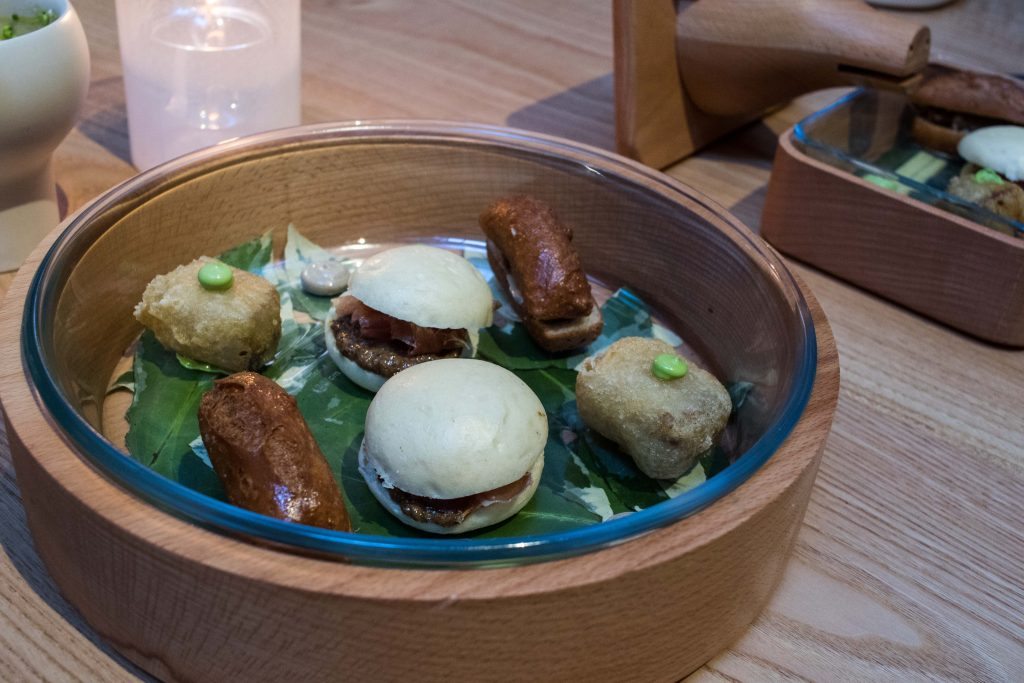 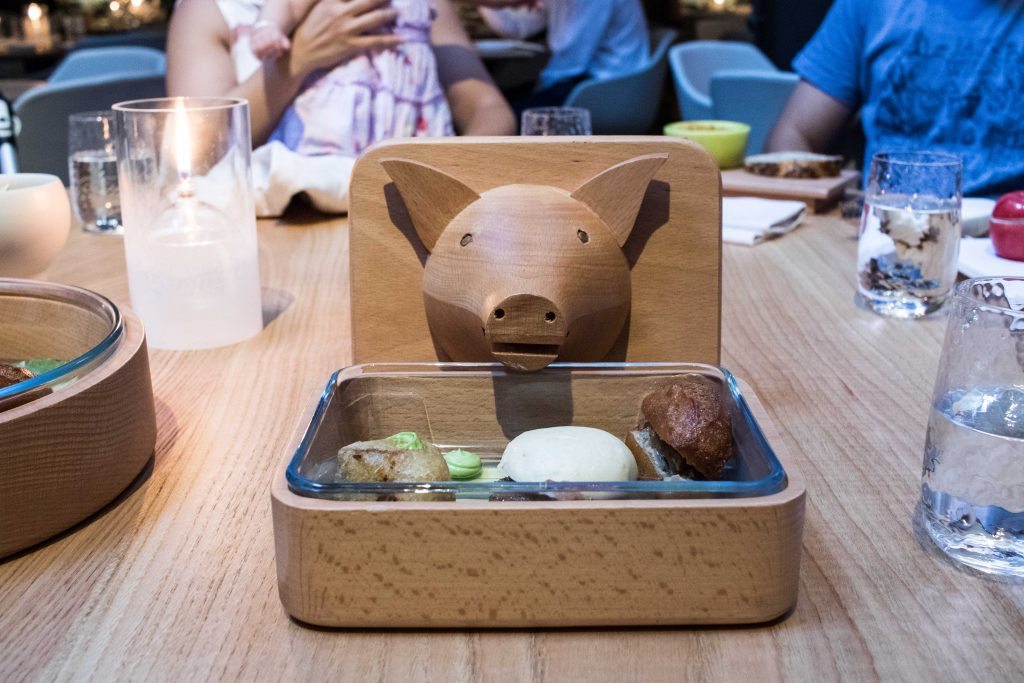 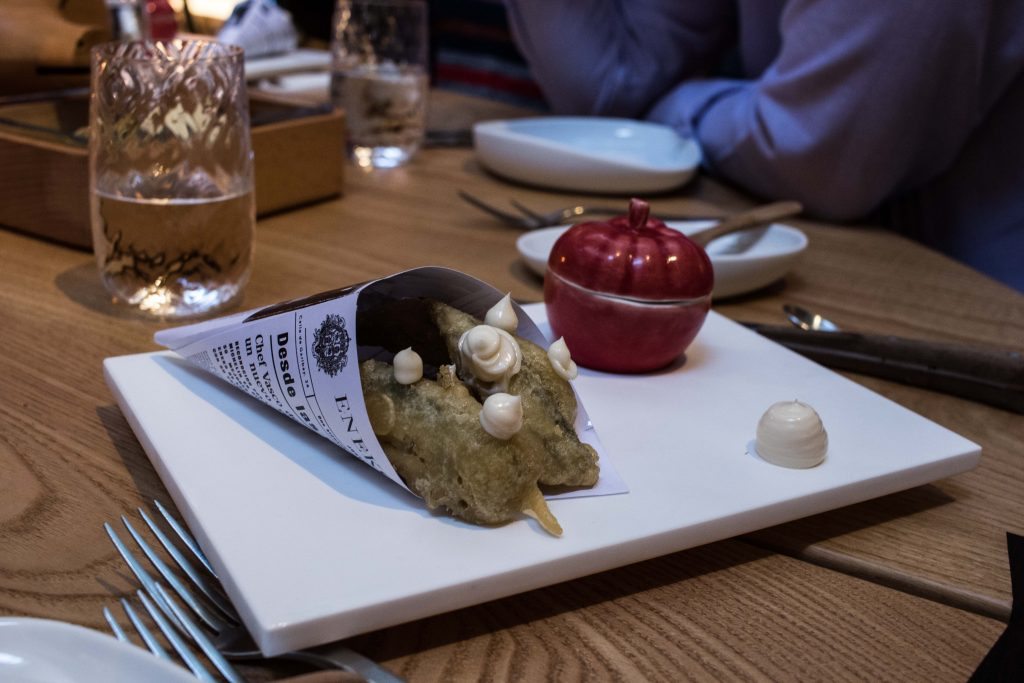 Anchovy tempura.  Fried anchovies in a newspaper look-a-like.  This dish tried hard to capture the rustic nature of fish and chips down from the harbour.  It succeeded in capturing something all right but it’s not something I should repeat in polite company. 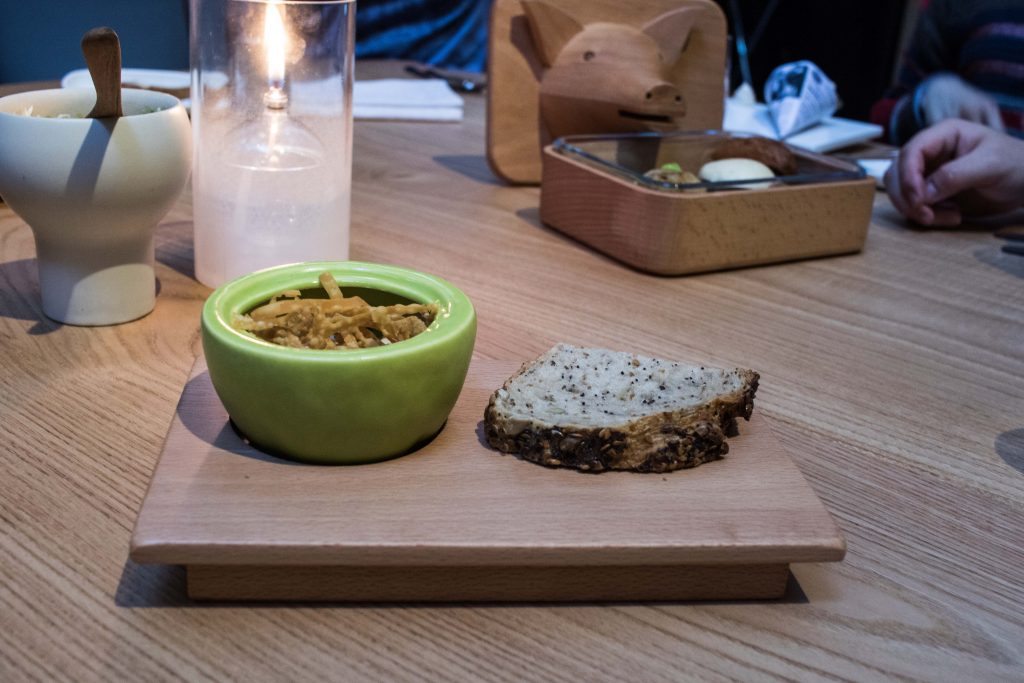 Basque Chicken Liver Parfait and Txakoli Apple.  Rather uninspiring, this tasted almost as if the liver had been pressed and blended into a tasteless mash.  More’s the pity for the rather meager portion of bread necessitated many refills from the bread basket in our hunger. 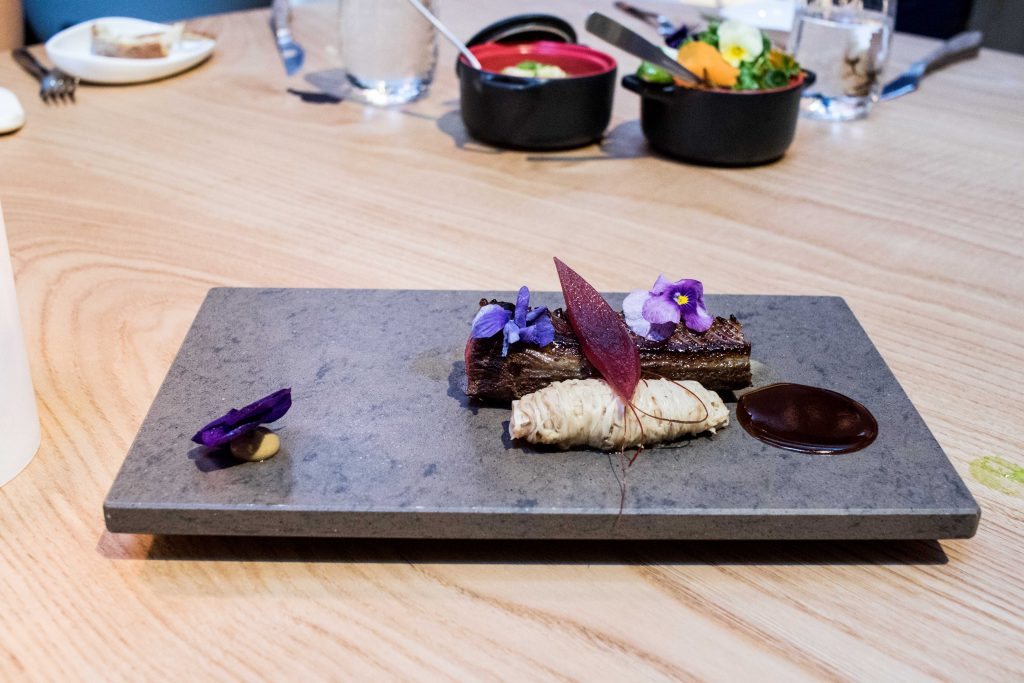 Duck, seared duck breast, julienne of king oyster mushrooms, red onion.  Not bad actually and beautiful presented.  Maybe the wood theme has something going for it.  That’s why I assume the duck tastes so good with a wood fired taste. 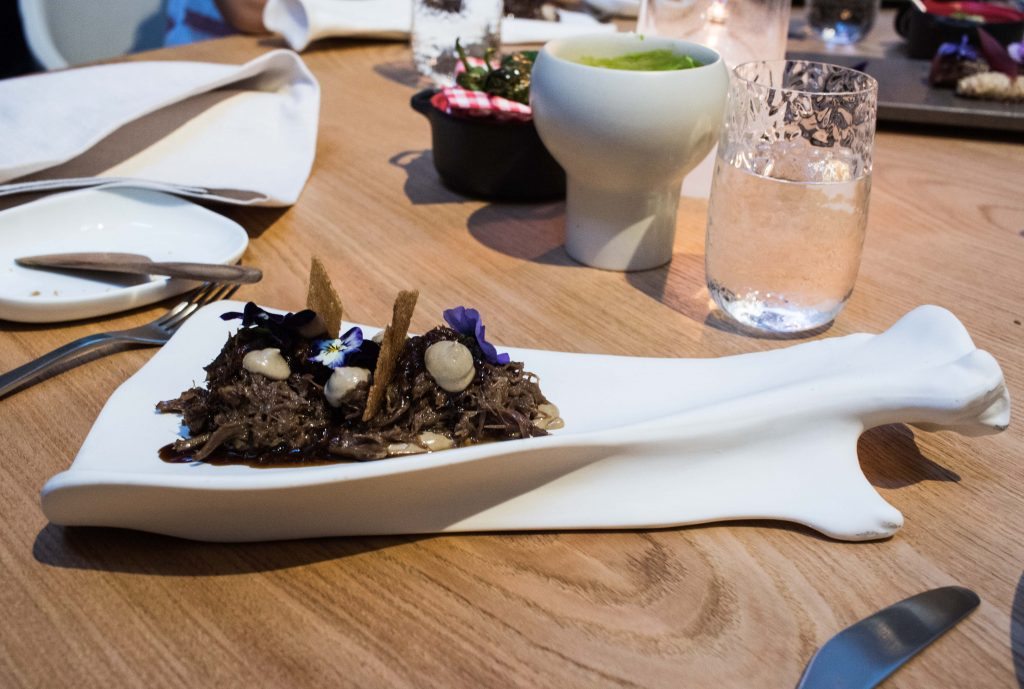 Oxtail, Mungla-style ox tail, mushroom emulsion.  Some complain that I am a glum, bland and lacking-in-spark man.  I could say in this case that this dish should bear my name.  A formless mush with heavy tastes, this was slightly too rich for me and a sad let down.  Like my teacher used to say in art class long ago, could have been great… 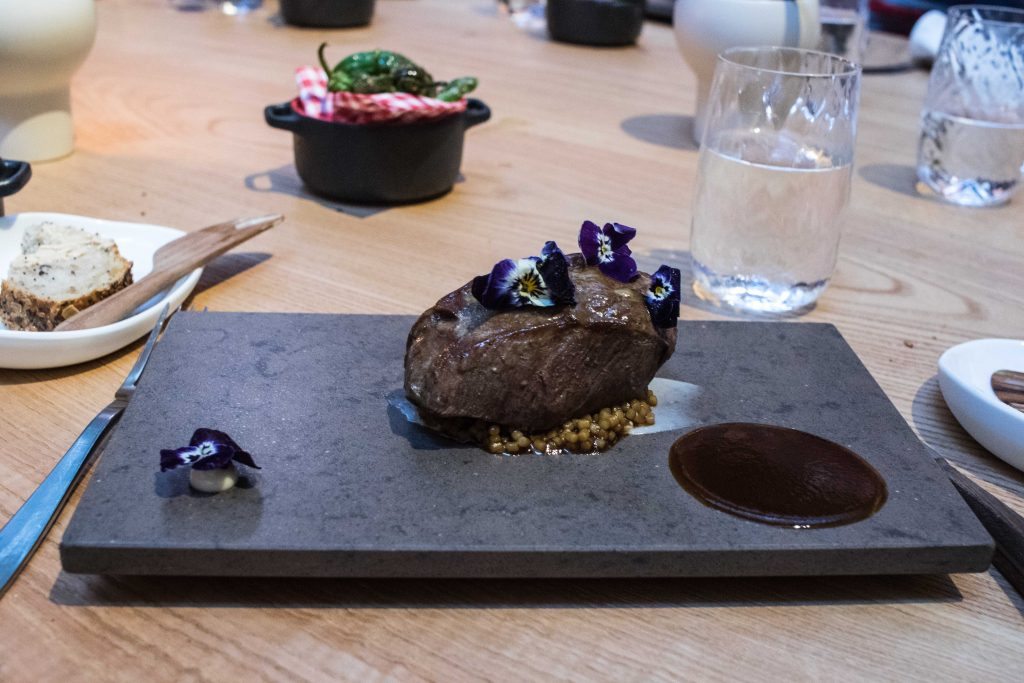 Pork, roasted Iberico presa, wheat in chickpea sauce, garlic cream.  Looks good, tasted worse.  The meat was of obvious high calibre.  The flower and puddle of gravy carefully placed.  The meat was not bad but just underwhelming when it was accompanied by the label of Iberico.  I expected the pork to knock my socks off.  Instead it rather more softy nudged me aside. 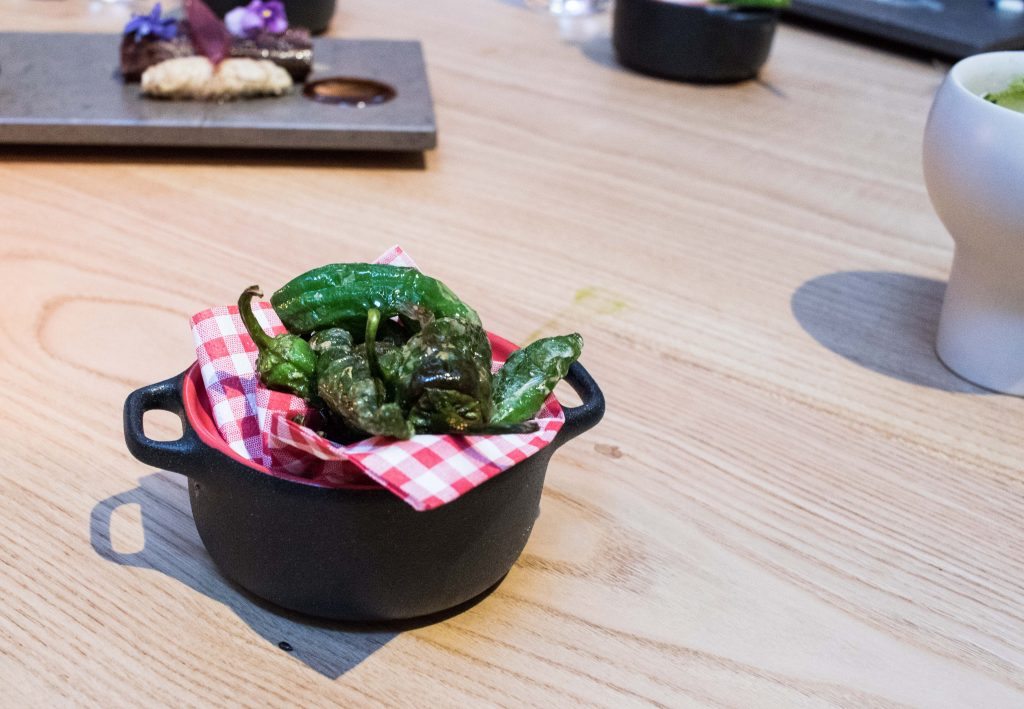 Piperrak, green Gernika peppers.  A rather dear dish at  GBP8 for 7 peppers.  Not something I was particularly enamored of either. These just didn’t do it for me as they were rather bland and unappealing. 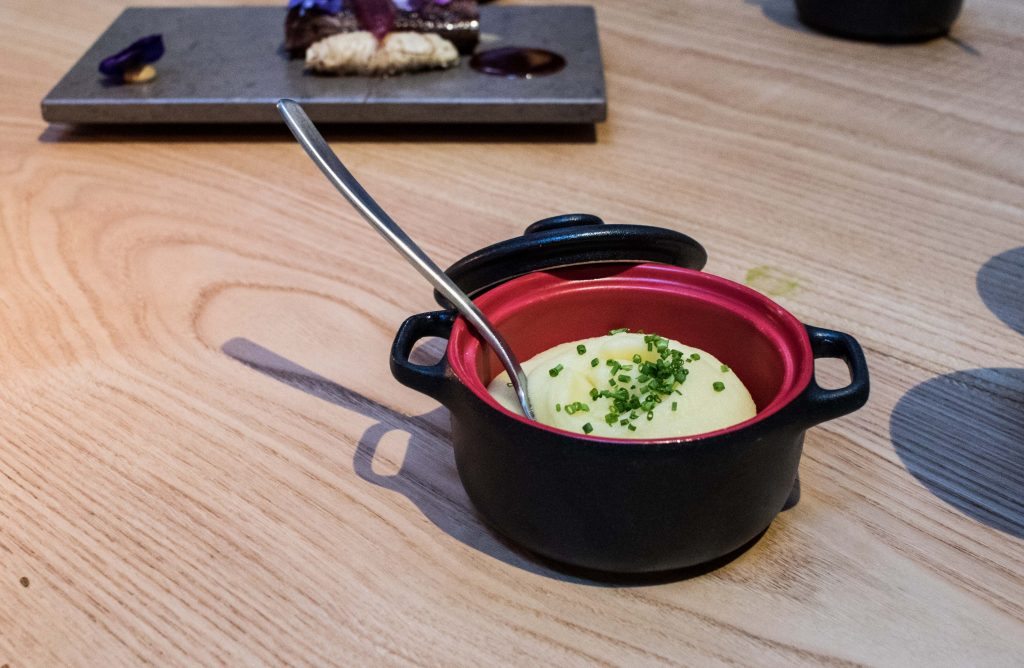 Mashed potato.  Well presented, rather ordinary in taste.  I just feel that you have to do better in the capital of the country that gave the world potatoes.  With this vegetable being so close to people’s hearts, here a mediocre take on this cherished dish goes a long way to encouraging people to consigning this restaurant to the bottom of the heap. 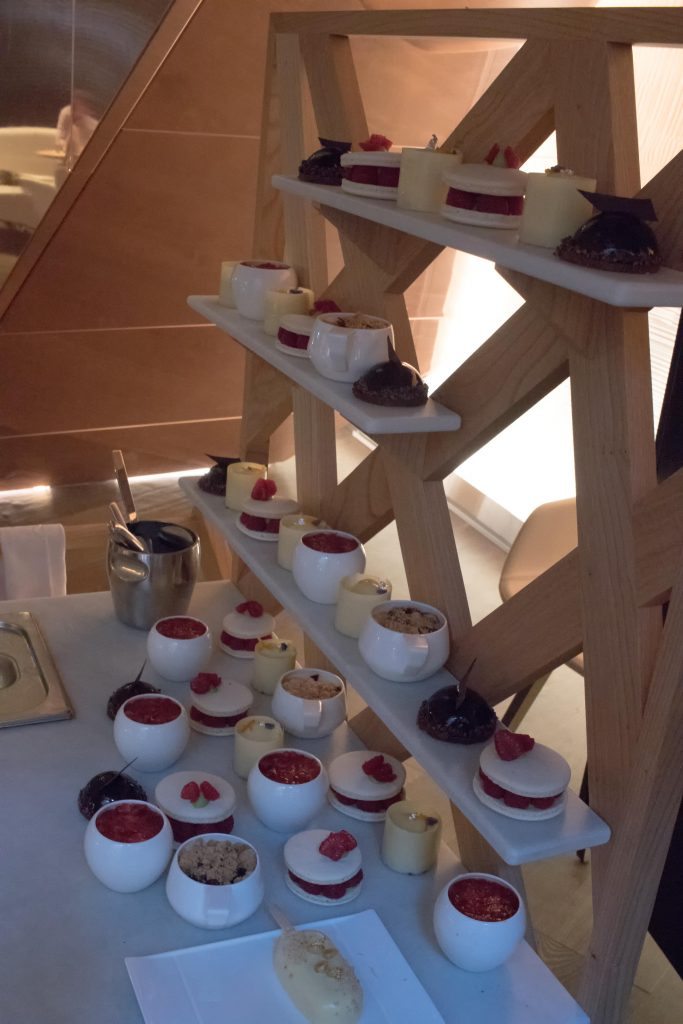 Dessert trolley. this had me salivating in thoughts that things would soon become better. 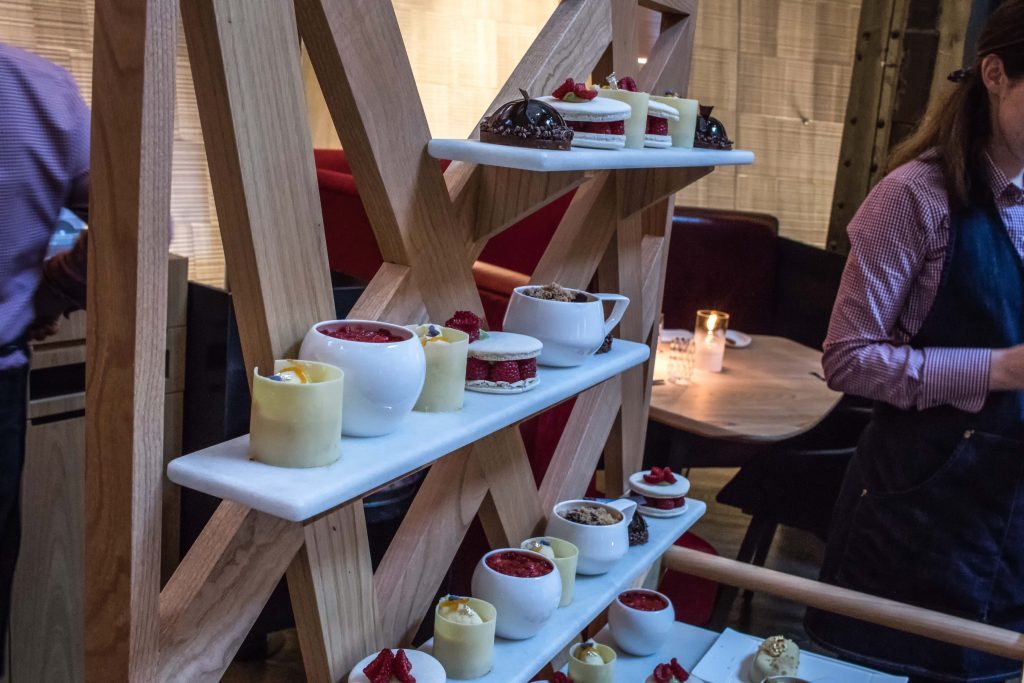 I guess we are all wrong sometimes.  I can remember in particular being mislead by beautiful photos of the Blue Grotto in Italy.   When I arrived, it was sadly rather minuscule, uninspiring and rather prosaic. 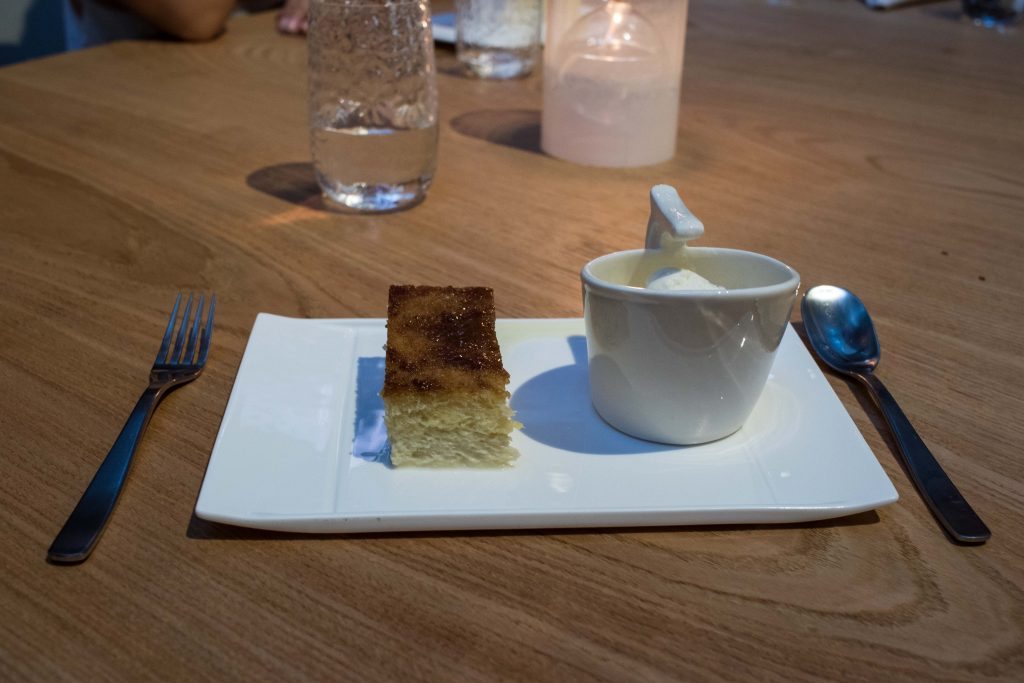 Basque vanilla pudding. This tasted a bit like a soggy sponge cake. And that’s possibly enough said about it – further description would probably add little more. 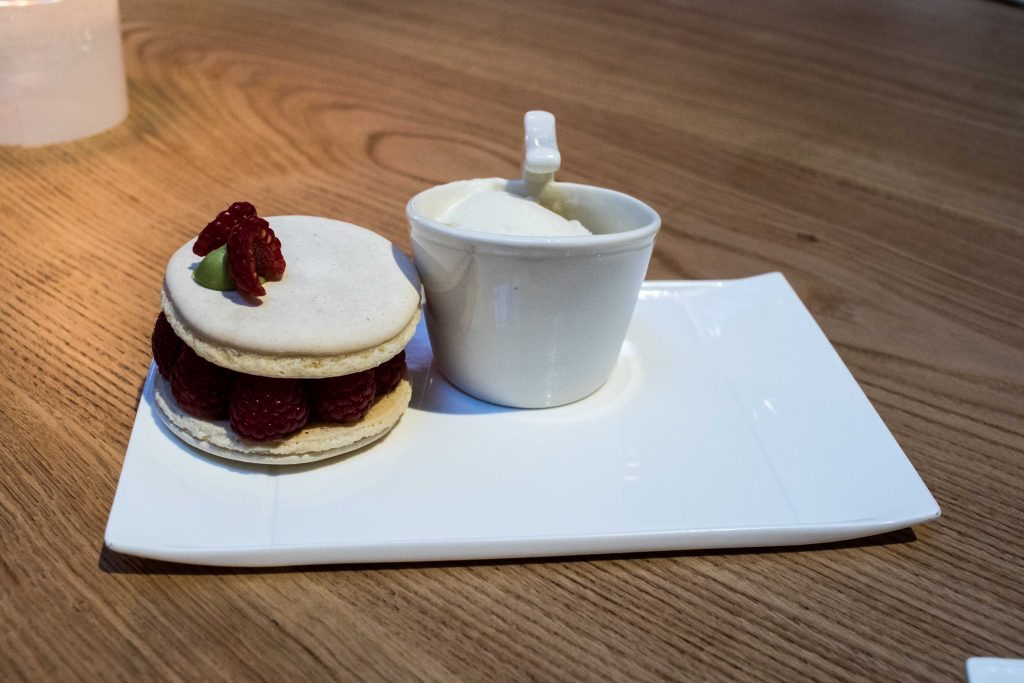 Raspberry macaron with basil ganache.  Looked oh so pretty, tasted a bit ordinary.  This seemed to be a theme of the dinner.  Exemplary presentation, less so with the taste. 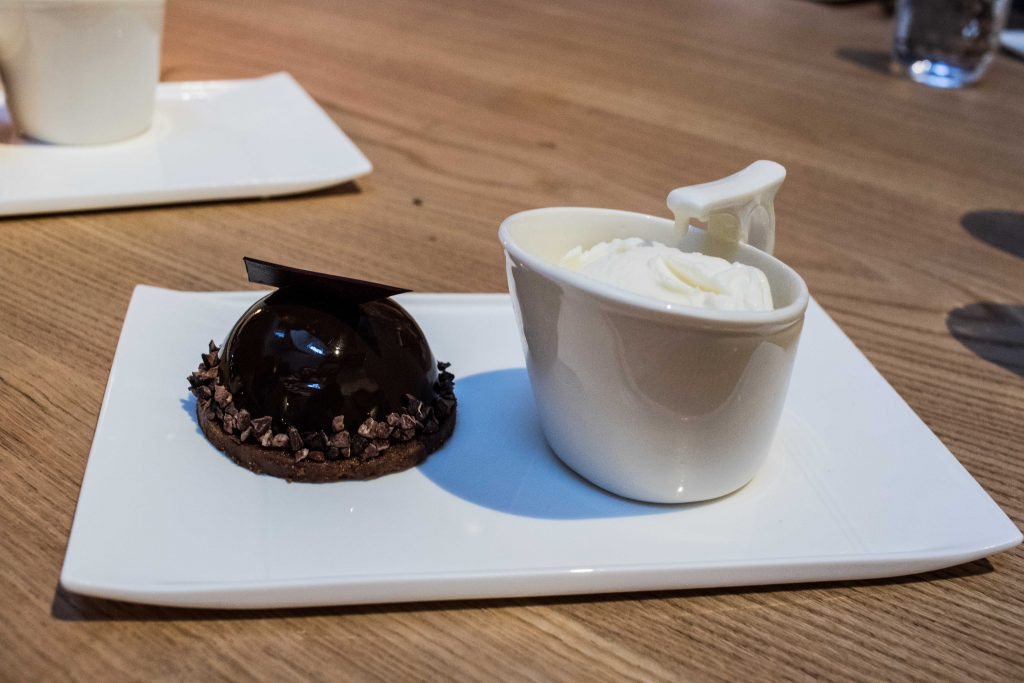 Dark chocolate with biscuit crumble base.  I had high hopes as this mirrored the almost unmatched bombe I had at the Ivy Cafe but this was to remain unrequited.  It was just rather ordinary.

Eneko has so much potential.  If looks were the thing that we all assessed restaurants on, this would be a winner.  I cannot fault the presentation of the dishes and unusually for a soft launch, the service seemed more than up to scratch.  The same could not be said of the kitchen unfortunately.  Hopefully the food will assume the heights of its protege because if it doesn’t, it might show that sometimes when you play with fire, you burn the house down.  Just sometimes, it’s a bit of a prolonged process.

Dinner was GBP28 (3 courses) excluding drinks and service but with the soft launch 50% off.