There are a lot of things I would like to eat.  So prefacing a noun with “eat” definitely draws my interest.

However, in this case I am a little confused.  As I would think that “eat” would usually be followed by a foodstuff, rather than a city.  E.g. eat sushi might be easier than eat Tokyo.  That might be a bit more than a few mouthfuls… 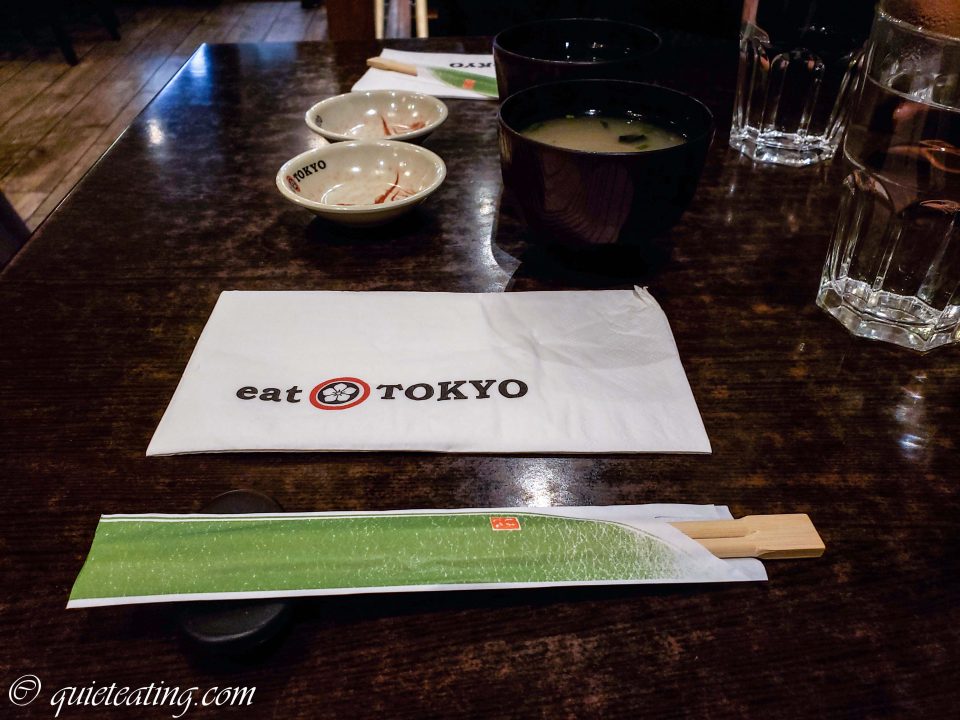 Although perhaps that was a foreshadowing of what was to quickly land in front of me once I sat down.  A particularly voluminous menu tome which seemed to promise almost anything that the Japanese palate could wish for.  My suspicions were piqued, as with so much to choose from, would anything actually be worth eating?  Jack of all trades and master of none springs to mind.  Yet, I try to learn lessons from the world around me and give places at least a chance. 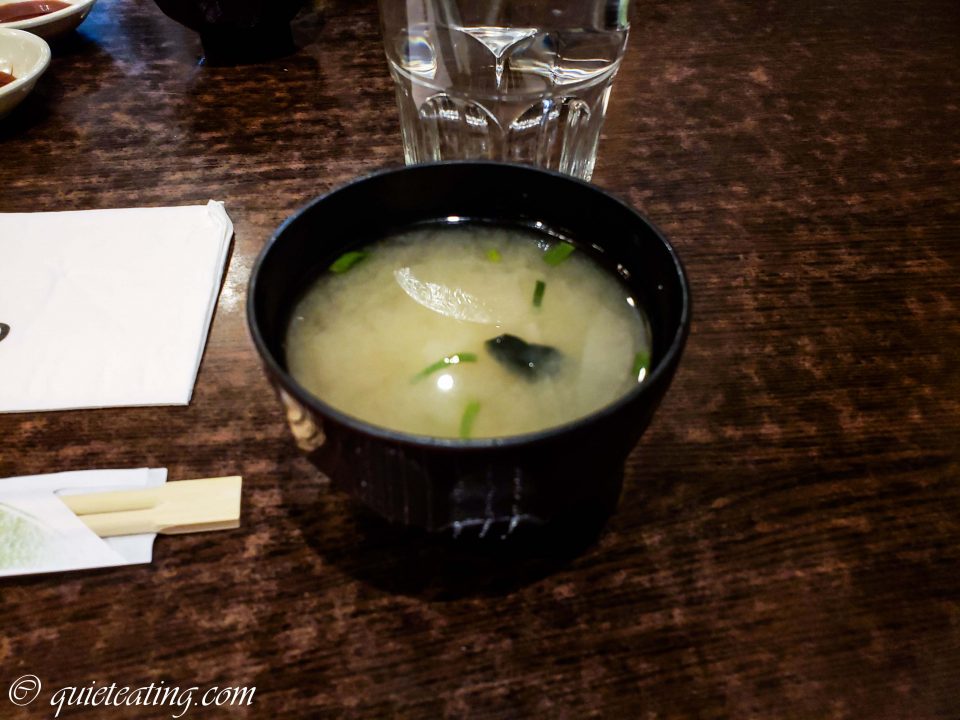 Miso soup.  Tasted so so.  With a rather flat taste, I had suspicions that it came out of a packet.  Then again, I admit that I am rather picky about miso soup and that others might be satisfied.  For me, this just didn’t seem to hit the right spot. 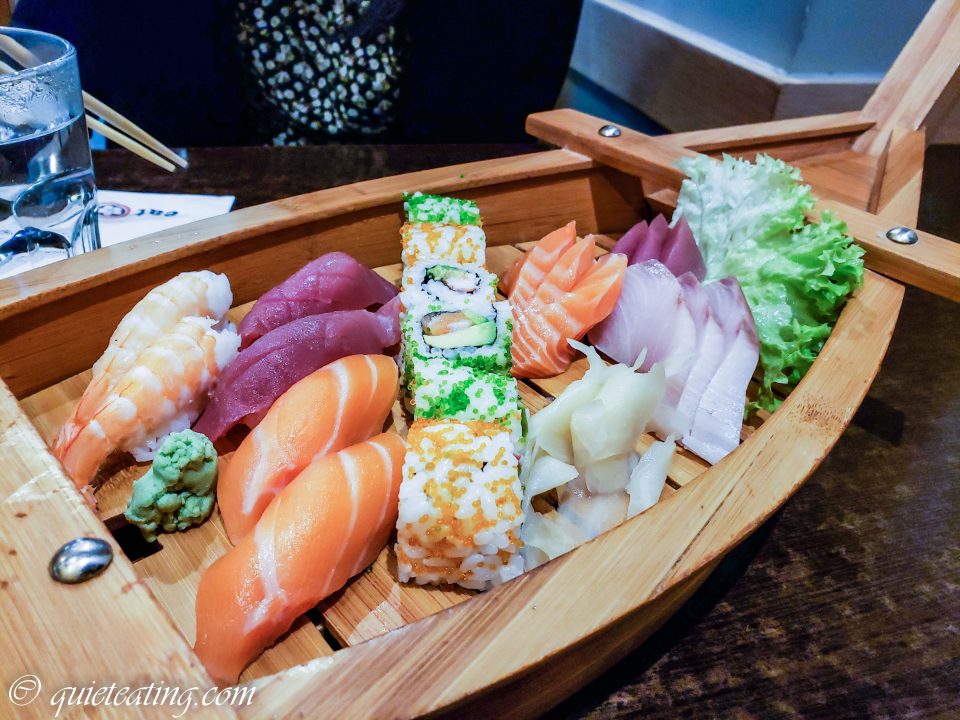 Sushi and sashimi boat.  Starting top left, going clockwise.  Sweet prawn, Tuna, California roll (salmon and avocado), salmon sashimi, tuna sashimi, yellowtail sashimi and salmon sushi.  First the positives.  For a rather reasonable price, this was a rather large quantity of fish and they were generously thickly cut.  Now on to the negatives.  Although I could tell that I was eating different pieces of seafood each time I speared another piece, it was more a recognition of mediocrity.  More like being able to tell the difference between hot and cold.  The different types of fish just didn’t taste that different from each other.  From rather lukewarm beginnings, their blunted tastes sadly congealed to produce something rather bland.  Perhaps they might have called this solid fish porridge, it would be more accurate as the tastes all ran together. 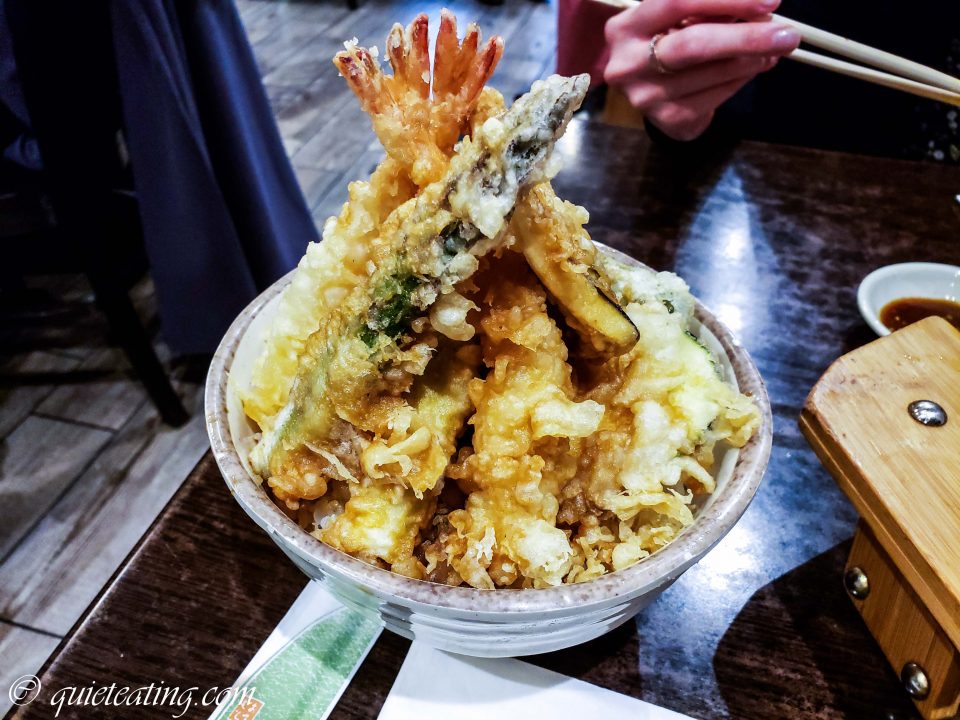 Tendon, deep fried prawn, asparagus, pumpkin, salmon and mushroom.  The tempura bowl also continued the same story.  Quantity but not quality.  Although they were generous with the portion size, taste was another matter.  Although the tempura batter was alright, the insides were another story.  Rather flaccid and flat, I felt more like I was eating batter with almost unidentifiable ingredients rather than the other way round.

Then again, what do I know?  Although I would give this place a miss, clearly not very would as the queues to get in are round the block.  Maybe it might be their quantity to price value.  Or perhaps it is the weight of their menu.  Alternatively, there might be value to offering everything under the sun.  Or perhaps they aren’t here to enjoy good food?  It might all be in the name.  Eat Tokyo is here so people can eat Tokyo.  Here is where you can try a little bit of everything without breaking the bank and then tell your friends all about it.  However, if you are in the market for something more discerning, look elsewhere.

Lunch (1 course) was about GBP14 excluding drinks and service.