When I was younger (and more naive), far away from my native land (and comfort food), I would easily fall into unceasing adoration of anything with rice.  In my first extended time away from home in London, I found that potatoes everyday just didn’t do it for me.  Instead, when times were hard, roast meats, a side of vegetables and fragrant rice would transport me back to hot, steamy and rather more tasty Hong Kong where a treat would be a plate of roast pork belly and duck.  In those days, it seemed that nothing could be better.

Today, as I am more mature (and cynical), such things fail to have such a star studded effect, I can afford to be more discerning (picky).  Simple replication of these ingredients is not enough to make me happy.  It needs to actually taste (and not just look) good.  So although I did think that I knew where the best Chinese roast meats were to be found in London (just head to Bayswater), sometimes other voices are able to overcome me (nagging).  This is how I found myself perched on a stool in Brixton market, attempting to relive my childhood days. 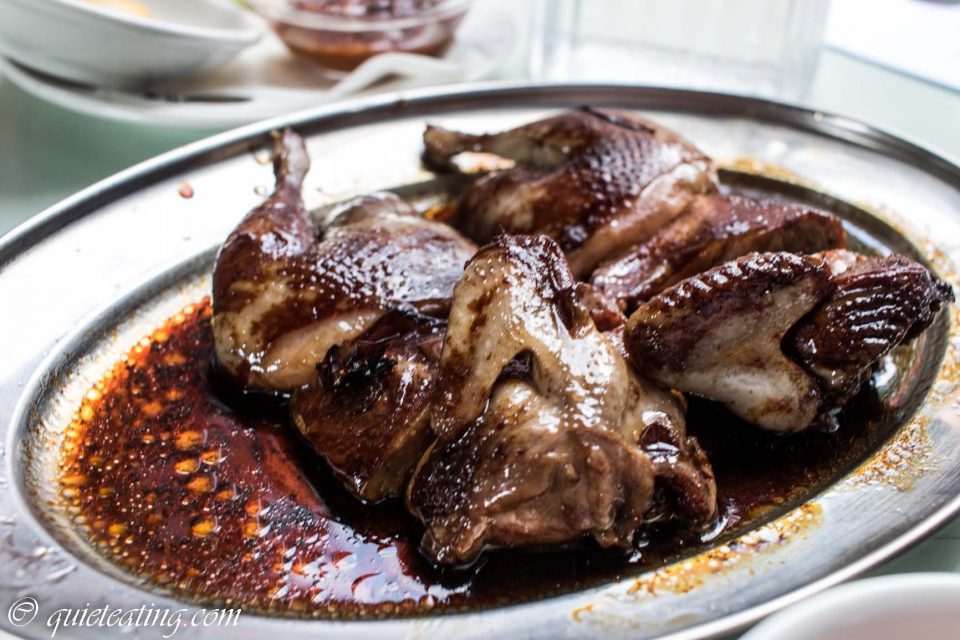 Soy quail with chilli sauce and ginger dressing.  Glistening with oil and sauce, the first bite was heavenly.  Moist and succulent with soy.  The second bite was less so, as things seemed more dry.  The third was rather more crunchy as I hit the bone.  I forgot how small these bones were.  It was ok if a bit dear at the price.

Pickles.  Nothing really that interesting or special.

Roast pork belly with five spice and roast duck.  The pork belly was good, then again not particularly hard to do well.  The duck was rather generous.  Generous in the amount of skin and fat included.  Actual flesh was harder to come by.  This specimen seemed to be rather bony.  As for the taste, it was a little better than Chinatown and the atmosphere was bright, light and hipster.  Yet even with the glistening oil, it just didn’t seem worth it. 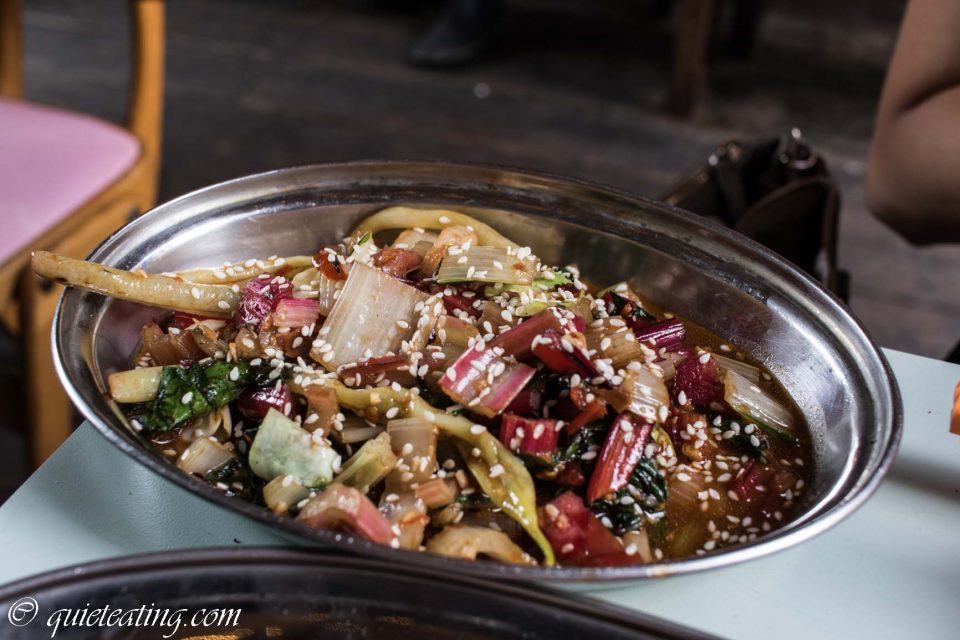 Seasonal greens with dried chilli, sesame, hispi cabbage, yellow beans and rainbow chard.  Colourful.  However, that’s about the most positive descriptor I could use.  I cannot remember ever having the same in any Chinese restaurant before.  After tasting it, I knew why.

Rice.  Nothing to write home about.

It could have been so much more.  An outpost of the East Asian kind in deep south London.  The food was more than I was expecting, the service less so.  After trying in vain to get the bill for 10 minutes, I was tempted to just get up and leave.  If they didn’t want my money and served up such chow, I would be happy to oblige them.  Having eventually succeeded at this task, I was finally ready to head off.  As I trumped away in annoyance, I thought that my visit to Duck Duck Goose held many similarities to ships passing in the night.  We met on the internet, engaged over duck and rice but then we went our separate ways after they finally let me pay them.  Hopefully I’ll never see them again.