Canary Wharf has recently been blessed with the opening of quite a few eateries.  Previously, this area has sadly been somewhat of a culinary wasteland as although it has some decent restaurants, it also has those that are not so much.  In this busy financial district of London, often the eaters are looking for something familiar rather than something on the cutting edge of cooking.  Indian food fits the bill as it has become so embedded in British culture that it is no longer seen as optional but a necessity.

Yet the bog standard can become boring if not for a delicate balance that must be threaded between too far and too little.  Not pushing things too far is of particular importance depending on who you are dining with.  Sometimes when I am dining out with British friends, some of them will display extreme reluctance regarding anything beyond their comfort zone.  In a recent dining trip to a Chinese restaurant, I remember ridiculing my English friend for insisting on sweet and sour chicken, when there was so much better stuff on the menu.  It wasn’t like I was ordering chicken feet or something after all.  Therefore, I applaud Dishoom for trying to address that myopic view of the world. 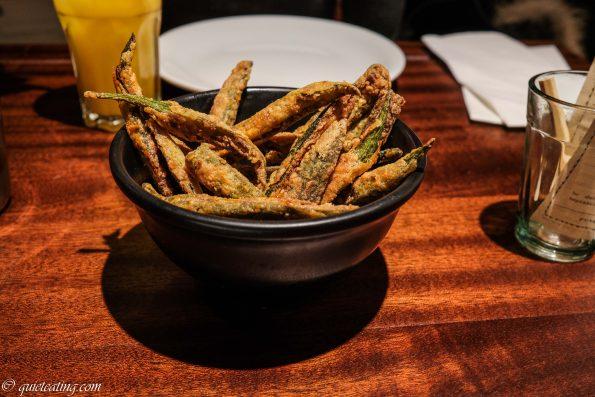 Okra fries, fine lady’s fingers for the finger.  Never had these before.  Never will miss ordering these again.  Crispy crust hiding delectable okra inside, excellent with some light seasoning.  Quickly polished off. 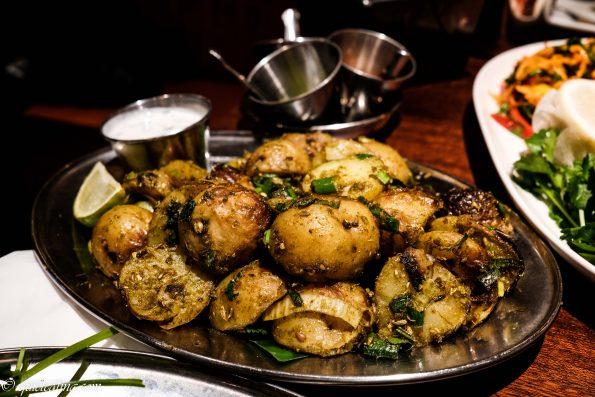 Gunpowder potatoes, new potatoes are smoky-grilled, broken apart, tossed with butter, crushed aromatic seeds and green herbs.  Probably the weakest dish of the meal, not that these were bad but were instead nothing special compared to the rest.  They seemed a bit bland and lacking in spark. 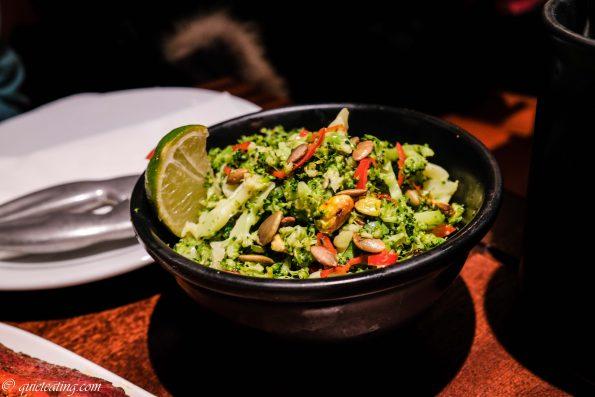 Chilli broccoli salad, a bowl of toasted pistachios and shredded mint leaves with the finest, greenest broccoli, fresh red chillies, pumpkin and sunflower seeds, dates, lime and honey.  A healthy dish (my dining companion insisted), it had great texture with chilli, broccoli, nuts and seeds.  The interplay of textures was particularly pleasant. 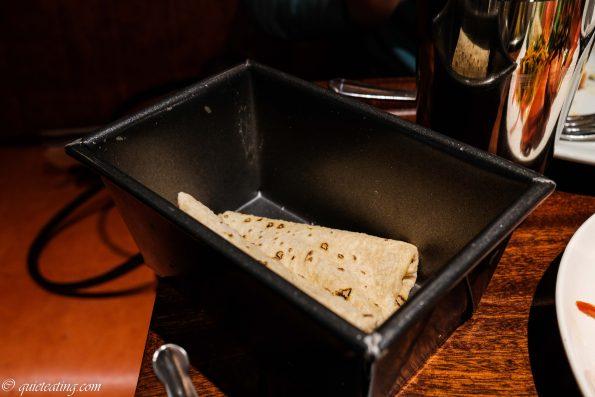 Roomali roti, soft handkerchief-thin bread, thrown, stretched and griddled to order on an upturned tawa.  Light and delightfully chewy, its thinness made me feel less guilty as I reasoned that this should be of relatively low-calorie count (don’t correct me as ignorance is bliss).  I’m not as young as I used to be, so I need to watch my waistline.  One way of living a happy life is to continue with culinary delusions. 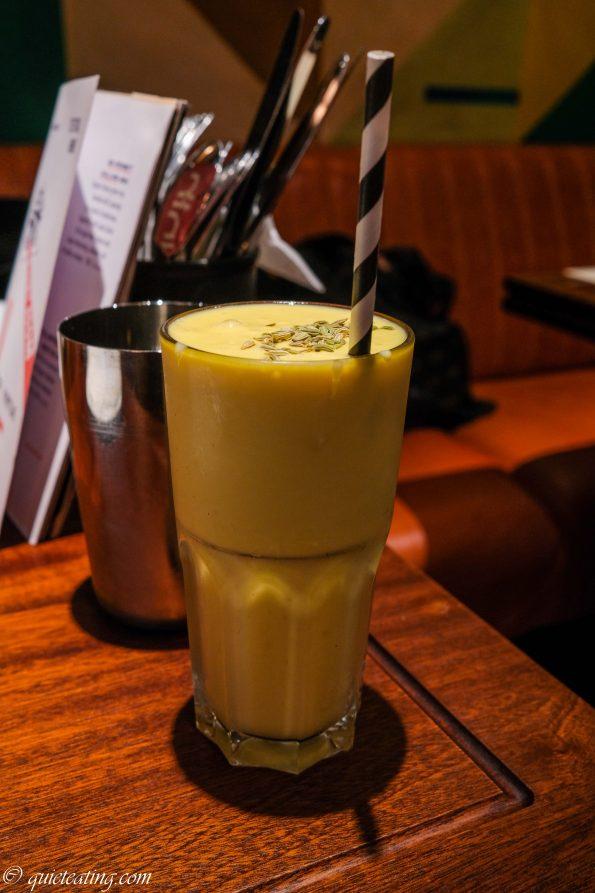 Mango & Fennel lassi, first-class yoghurt-drink with mango and a sprinkling of fennel seeds.  Delicious sweet and savoury drink whose creaminess almost made it qualify was a dish in itself.  Great for quenching the fire of some of the dishes as well. 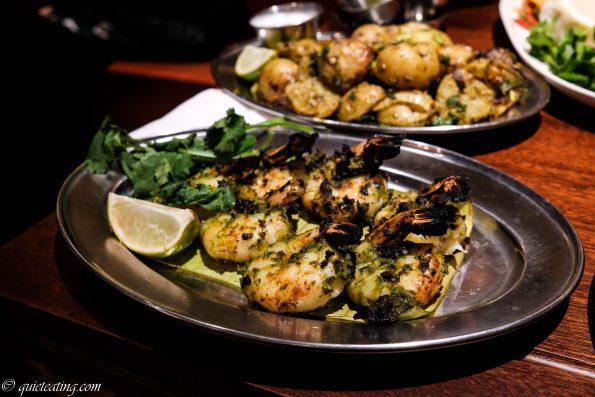 Masala prawns, each one charred slightly at the edges, succulent and simple, nothing to bamboozle.  These were excellent as already deshelled yet not overcooked.  With masala seasoning but otherwise leaving the prawn’s natural taste to shine through, I could have easily spent the whole meal eating just this.  However, that would be doing a disservice to our greatest friend to follow. 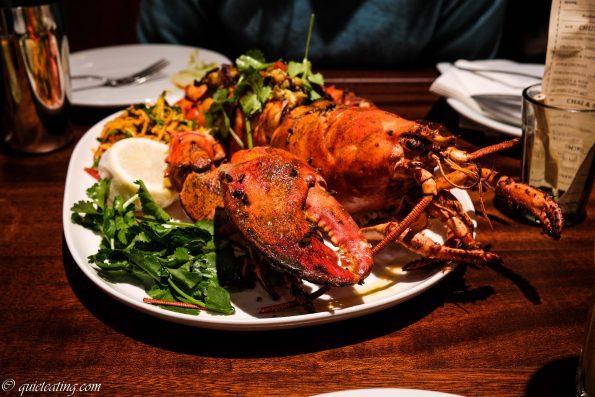 Malai lobster, marinated in creamy malai comfort, tail meat is grilled and finished with a generous pat-down of butter, lime and chilli.  This was a big lobster clocking in at almost 1kg.  Expertly grilled, this succulent beast exploded in my mouth with an almost overwhelming umami taste.  The quality of the ingredients was complemented by a light but flavourful sauce.  Meaty, flaky, succulent, it had all the elements I had hoped for. 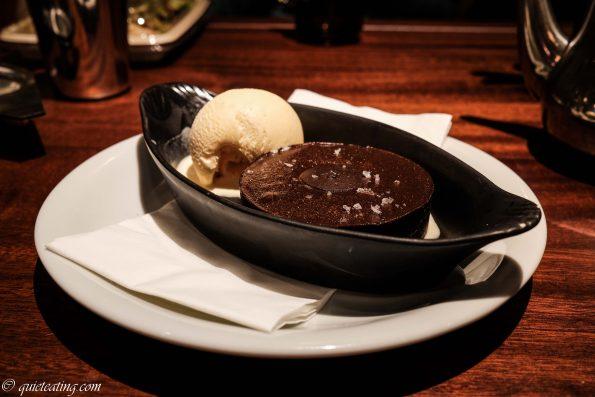 Dishoom chocolate pudding, melting-in-the-middle chocolate pudding served with a scoop of Kashmiri chilli ice cream.  The pudding was decent but not particularly unusual as it was the ice cream which was different.  With a creamy flavour but with chilli afterburn, the hot and cold temperature and spice and luscious chocolate of the pudding competed in my mouth to create something great.  A great way to end.

Reimagining of the status quo can be dangerous.  Think of all those Italian chains that lauded themselves for bringing something different to the UK restaurant scene.  Perhaps they succeeded for a while but I don’t seen many of them hanging on.  Yet it is only with risk, that people can sometimes find their fortune.  At Dishoom, it seems to be where usual expectations of Indian food are challenged.  Challenged for the better.  So taking courage from Dishoom, maybe I should order chicken feet for my friends next time I go to a Chinese restaurant.

We were invited, an average lunch, i.e. excluding lobster (3 course equivalent) would be about GBP30 excluding drinks and service.