I had lunch at dinner.  I can already feel the virtual eye rolling that my readers are engaging in right now. 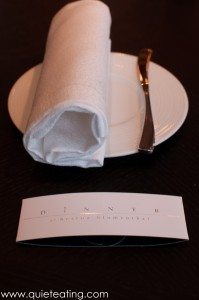 Let me explain why I made such an eye catching statement.  Dinner generally is the biggest meal of the day.  In antiquity it used to be eaten at lunch.  How fitting that we were to be doing our testing at the traditional time.  Dinner comes with an interesting twist.  The dishes are old.  Not old like the food your old codger used to eat but old like Robin Hood and his band of merry men in tights.  All dishes on the menu are marked with their appropriate era of invention as part of their description. 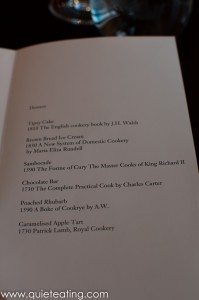 See this for an example.  Date of origin helpfully located next to source of inspiration. 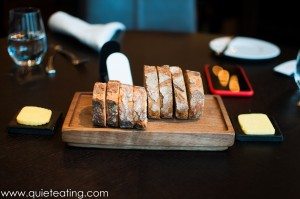 First up, to whet the appetite a bit. Some white and brown bread.  Nothing too special.  Not like the lovely bread I had had at other places, like the Ledbury.  I am looking at you with your bacon bread.  Not bad.  But just a bit ordinary. 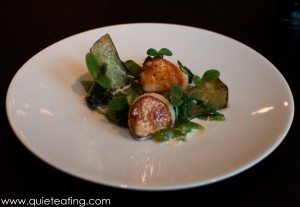 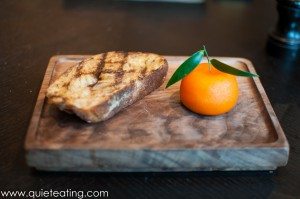 Next up, the meat fruit.  The item I have heard so much about.  On the left is just normal bread.  On the right, something that looks like sort of a fruit complete with leaf right?  Why is it called a meat fruit? 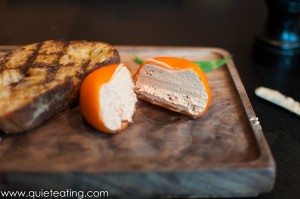 Cut it open to see.  This fruit has hidden inside it chicken liver parfait.  A very unusual combination.  The sweet skin contrasting with the savory liver.  When eaten with the crispy bread to add a crunchy contrast to the soft texture of the meat fruit, this was an eye opening dish! 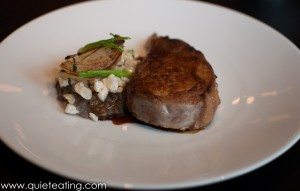 Having devoured the starters, we expected great things from the mains.  Pork chop.  Recommended by the waiter.  Honestly, I thought that this dish seemed to lack anything to make it really stand out.  It was a slightly over cooked pork chop, a bit dry inside, and seemed rather plain.  The accompanying greens seemed to outshine the pork unfortunately… 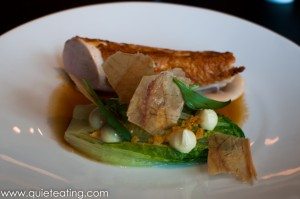 Chicken. Accompanied by lettuce. Well cooked and nothing to really fault. But like the pork chop, it seemed to lack anything in particular as a talking point. I guessed that although the meat was reshaped chicken breast which was then wrapped with chicken skin and was visually appealing it seemed to lead to a bit of silence on the table when I was asked how it was.  Utilising my knowledge of British euphemisms, I said that it was “interesting”. 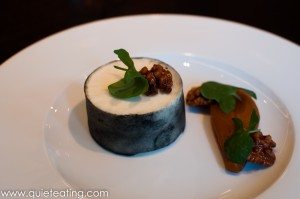 Sambocade.  A goat’s milk cheese cake which accounted for its rather light taste when compared with the honey soaked walnuts and apricot.  A nice contrast to the usual too sweet desserts you usually find but not ground breaking. 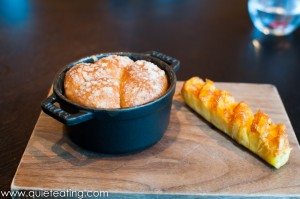 Tipsy cake.  A little cake soaked time and time again in alcohol (brandy?) with a spit roasted pineapple on the side.  Soft and airy inside and exploding with flavour. It reminded me a little of what candy floss might taste like if it was distilled down to a more substantial form with the extreme sweetness subtracted.  Ok, I know that is a very clumsy description but I can’t think of anything else to compare it to.  It was really just that unique.  Although as you can see, I am never lost for words, just a lack of good ones. 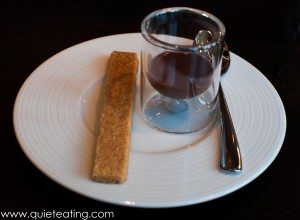 Chocolate fudge with a biscuit as a little petit fours.  A nice end to the meal but again nothing special.

The meal contained occasional flashes of brilliance (the meat fruit and the tipsy cake in particular) but seemed to dip down to merely average for some dishes.  The concept is truly something to applaud but I know that throughout my blog, although I tend to say that my tastes are too primitive to appreciate culinary artistry but in this case, maybe my palate is too sophisticated to appreciate some of the flavours of dishes from ages past.  Either that or there are reasons why some dishes were dropped from mainstream menus over time.  At the price (GBP70-80 a head without wine) I honestly expected more.