The name Culture Grub puzzled me at first as it seemed to be a great oxymoron.  Did invertebrates habitually carry around their species’ combined learning where ever they went?  I know that sometimes there is value to be had by grubbing around in the dirt in search of buried treasure but this seems to be taking things a bit too far.  With such a name, I couldn’t help but make comparisons to the current negotiations for leaving the EU.  Digging around in the mud for a solution by the various delegates (in particular on the UK side), an alien might be mistaken in thinking that there was a diamond hidden somewhere given the amount of furious action taking place.  Then again, the way things are going, the negotiations might be better handled by an unorthodox approach.  After all, it is not like things could be going any more shambolic.

In any case, when we were at a loss for things to eat around Waterloo, and my suggestion was overruled (that often happens, especially about food), we ended up at Culture Grub.  I admit to having not much expectations of such but starting from the bottom is the safest.  That way when things turn out bad it isn’t such a big shift of expectations.  The fall to earth isn’t so hard (and painful) that way. 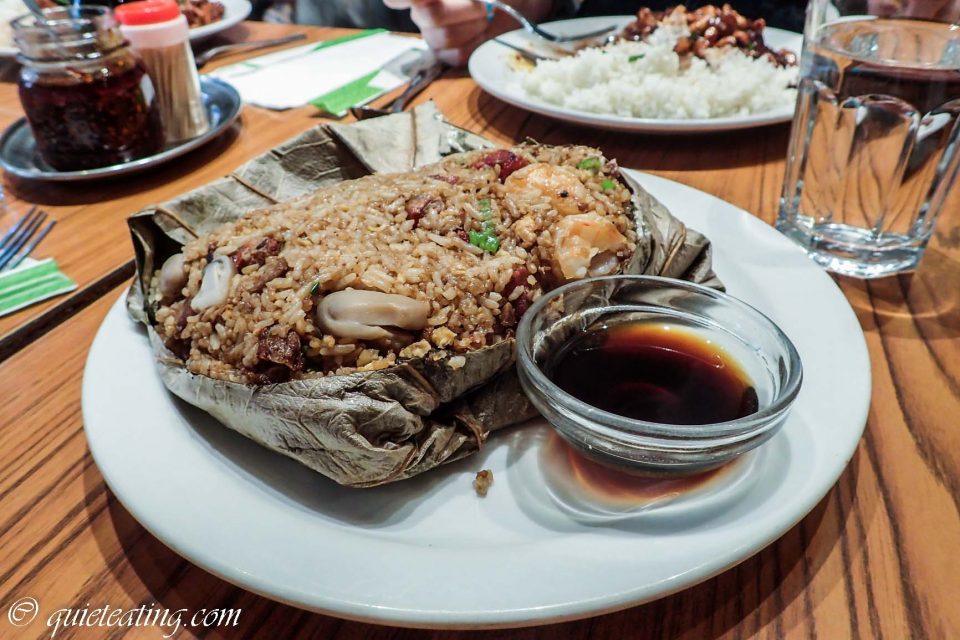 Treasure rice.  Slotted into a lotus leaf is fried rice, with an accompanying bowl of soya sauce.  That and the various other condiments easily in reach (chilli oil especially) were there for a reason.  As the rice simply didn’t taste of much of anything. I wouldn’t say that it was particularly bad, more that it seemed rather lacking in anything.  Further, in its wrapped up form, it seemed rather slinky, bouncy and squishy.  Similar to grubs I have known.  Not that I have tried any but I can remember days of poking around in the mud with sticks at grubs and worms.  Those were simpler days.

As a no frills Chinese place at Waterloo, this certainly fits the description.  It is fast, efficient and a fairly reasonable price for the area.  I’m sure that I was probably unlucky and picked the wrong thing.  Everything else would probably have been much much better.  So maybe I should give them a second chance.  However, if you are around the train station and looking for a place for a place of culinary delights, perhaps it might be justifiable to have another look around.  Now if only people in other walks of life would do the same.