We originally went hunting for buffalo wings in Brick Lane on a review by Cheese and Biscuits. Sadly, the place was shut when we got there at lunch time – possibly due to it being the pre-Christmas weekend. So, we continued up Brick Lane towards the Truman Brewery to explore the markets and food trucks. Continuing the hunt for chicken, we ended up trying the stuff from Mother Clucker and Orange Buffalo – two food trucks that have been around for quite some time now and have been pretty well reviewed by lots of people. 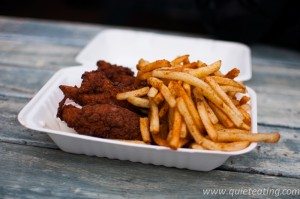 Both food trucks are in residence in Ely’s Yard in the Truman Brewery (sharing the space with a collection of other food trucks). There is seating both outdoors in the yard and indoors in the nearby market. Based in a converted army ambulance, Mother Clucker serves ‘tea brined, buttermilk soaked, twice battered fried chicken’. On offer is a chicken burger (‘The Cluckwitch’) @£7 and 4 strips @£5, with Cajun fries, black eyed peas and mac+cheese as sides. We ordered the strips and fries – easier for sharing – and generally agree that it’s definitely very good fried chicken. The meat was moist and tender with crispy skin; the fries serving well as an accompaniment – all in all, good Southern comfort food.

In the same area, the Orange Buffalo serves up New York style buffalo wings. £6 gets you 8 wings which come in 4 levels of heat – tangy Original, and becoming progressively hotter, Woof Woof, Vincent and Viper. The wings come with celery sticks and a blue cheese dip. Somewhat handily, they recommend tasting the sauce first to test out the level of spice. And just for the fun, they also sell a mixture of 7 Original wings and 1 Viper mixed together in something called Snake in a Basket. 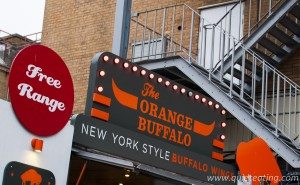 And this is what we ended up ordering (along with a side of curly fries) just ‘cos we liked the whole Russian roulette idea (and also ‘how hot could it possibly be?’). I think all that probably needs to be said is that the person who ended up eating the Viper endured a significant of heat and pain for quite some time after… It was pretty noticeable which other customers had ordered the same thing and when they ‘bit the bullet’ as it were… 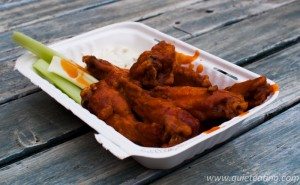 On a side note, the curly fries were actually really good. 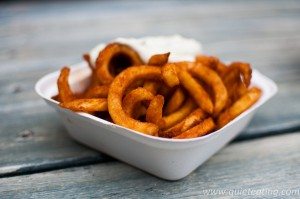 Overall, there is something pretty addictive about both the chicken trucks – comfort food is quite hard to beat. Think we would definitely return again (not least for the fun of convincing someone else to try Viper level spiciness… Also, there are other chicken places in the area to check out too – Sticky Wings and Bird await next…

(Maybe 7.5/10 for Mother Clucker as we were definitely more partial to the Southern fried stuff…)