With a new year, time to try something I had been hearing about for a long time.  No, it’s not what you are thinking.  It’s a new restaurant!

Koffman’s, a restaurant so well known (at least within my circle of friends) to be termed an institution, suddenly seemed to pop up in my inbox offering a special pre-threatre dinner for only GBP28 for 3 courses.  A steal I thought if reminiscence of other diners was anything to go by.  A little new year’s present to me.

First up, an amuse bouche.  A thin pizza bread. 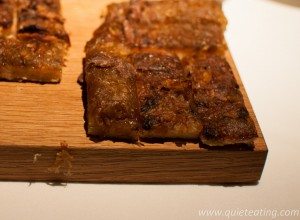 A good thin crust base.  Although I do wonder how long the dough had been prepared beforehand as there was an unpleasant heavy taste of oil in the base. 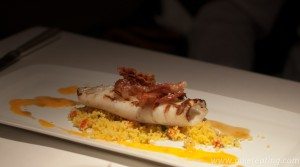 A starter of squid went down well.  It was cooked well, avoiding the rubbery element that occurs when too zealous a cook is involved.  The couscous providing a base offered and interesting counterpart.  Well cooked and inter spaced with decoration (ie small cubed vegetables). 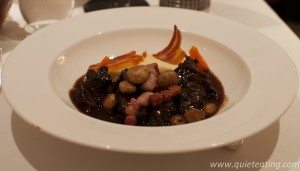 Now onto my main course.  Beef cheeks in red white with potato mash.  Upon spying this on the menu, I knew that this was the one I would choose.  Beef cheek has such a soft and succulent texture and brings back fond memories of the Wagyu beef I used to have in Tokyo.  I do love a cut which is so very moist as fat seeps into the meat.  Unfortunately, it seemed that the beef had not been left long enough in the sauce for the flavours to bleed in, as the taste of the red wine sauce, which was very good, only managed to permeate the top layer of the cheek, leaving the insides tender but altogether a bit bland.

Although I found my main course slightly boring, my fellow diner was experiencing more “excitement” with his dish. 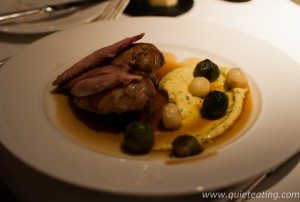 Inside his partridge, he found an interesting little ball.  Maybe pepper?  With my suspicious mind, I judicially prodded this “interesting” ball to ascertain what it really was. 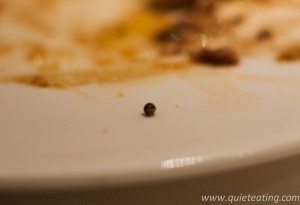 It is a lead ball.  As explained nonchalantly by the waiter when we waved him over.  Partridge, being game, needs to be shot to be captured.  No nonsense about a sudden twist of the neck as with chickens, as I had witnessed countless times in a Hong Kong market.  Partridge is not nearly as accommodating as chicken, the latter which is fairly docile and seems to have the self-preservation instinct bred out of it, but the former must be hunted down and will not stop short of being filled with lead.  I know I tease my fellow diner with having a steel jaw, more in reference to his countenance rather than literally, but I think this was taking things a bit too far.

Moving swiftly on, despite the weighty characteristic of lead, was dessert.  A chocolate moose with a peanut ice cream. The ice cream was an inspired choice.  I remember I would happily chug the Ed’s Diner’s peanut butter milk shake when ever possible.  To the horror of my more calorie conscious friends as apparently it contained sufficient calories to count as a meal in itself.  Ice cream in this flavour can do no wrong in my eyes. 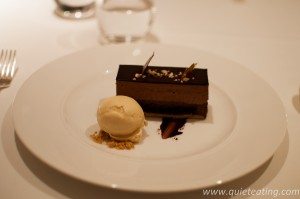 However, the moose itself was a bit flat.  With a texture akin to softly boiled play dough it was hard to become excited with this.  It may have been helped in its structural integrity by expanding the base to provide a bit more crunch to this dish and purely as a unintentional side effect complementing the texture as well.

Put all together, I would say that the meal followed a trajectory similar to a roller coaster ride.  With a build up at the start with nice scenary on the way up.  Followed by, in the case of my fellow diner, not mind numbing terror but rather an unexpected and unwelcome twist, and in the case of myself, medicority.  To finish, a little bit of a thrill with a small pleasant bump at the end.  Were I to liken this to my amusement park experiences, it would similar to the rides in Disneyworld, provided for the entertainment of under 10s.